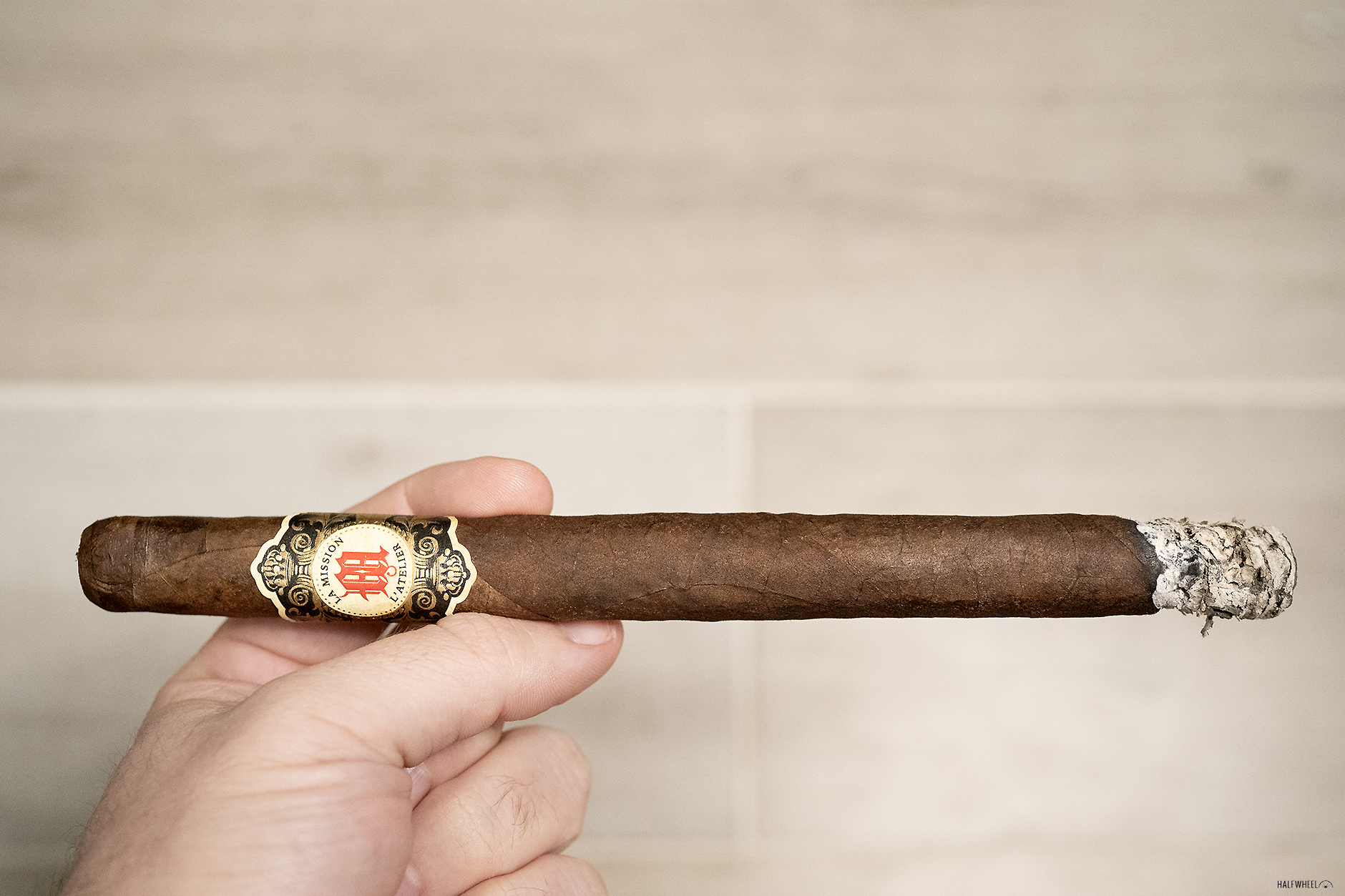 In or around 2016, Pete Johnson of Tatuaje and L’Atelier Imports decided to create some unique cigars for members of the Saints & Sinners Club, a private membership group of Tatuaje fans that is based around an online community and access to limited run cigars generally created for the club.

After a few years of the club’s existence, an in-person event dubbed the Saints & Sinners Mega Herf was organized for the summer of 2016 in Philadelphia, and those cigars would be released, A vitolas for the Tatuaje Fausto and La Mission L’Atelier lines.

Properly known as the La Mission L’Atelier 2020 and the Fausto FT235, each cigar measures 9 1/4 inches long with a 47 ring gauge, a size known as a giant corona or, more conveniently, an A vitola. The cigars were presented in a coffin containing the two cigars and offered to attendees for $30 per coffin. Johnson produced 500 of them, with 175 released at that event and the remainder saved for future Saints & Sinners events.

In the case of La Mission L’Atelier, the line was released in 2015 and uses Nicaraguan fillers grown by the García family, including a varietal called Sancti Spiritus, along with a Nicaraguan binder and a Mexican San Andrés filler. It was released in three sizes, the 1959, 1989 and 2009, though has since grown to include several more regular production vitolas.

According to an interview Johnson did with AromaG Media at the 2015 InterTabac trade show, “the name was based off of the history of the Chateau in France, called La Mission de Haut-Brion.” Additionally, the vitolas largely reference vintages of the wine that have received 100-point ratings from Robert Parker’s The Wine Advocate.

Of note, the 1955, 1982 and 2003 sizes were put “on hiatus” last year. For now, that means the cigars are not being made, though Johnson has left the door open for those cigars to return at some point in the future. 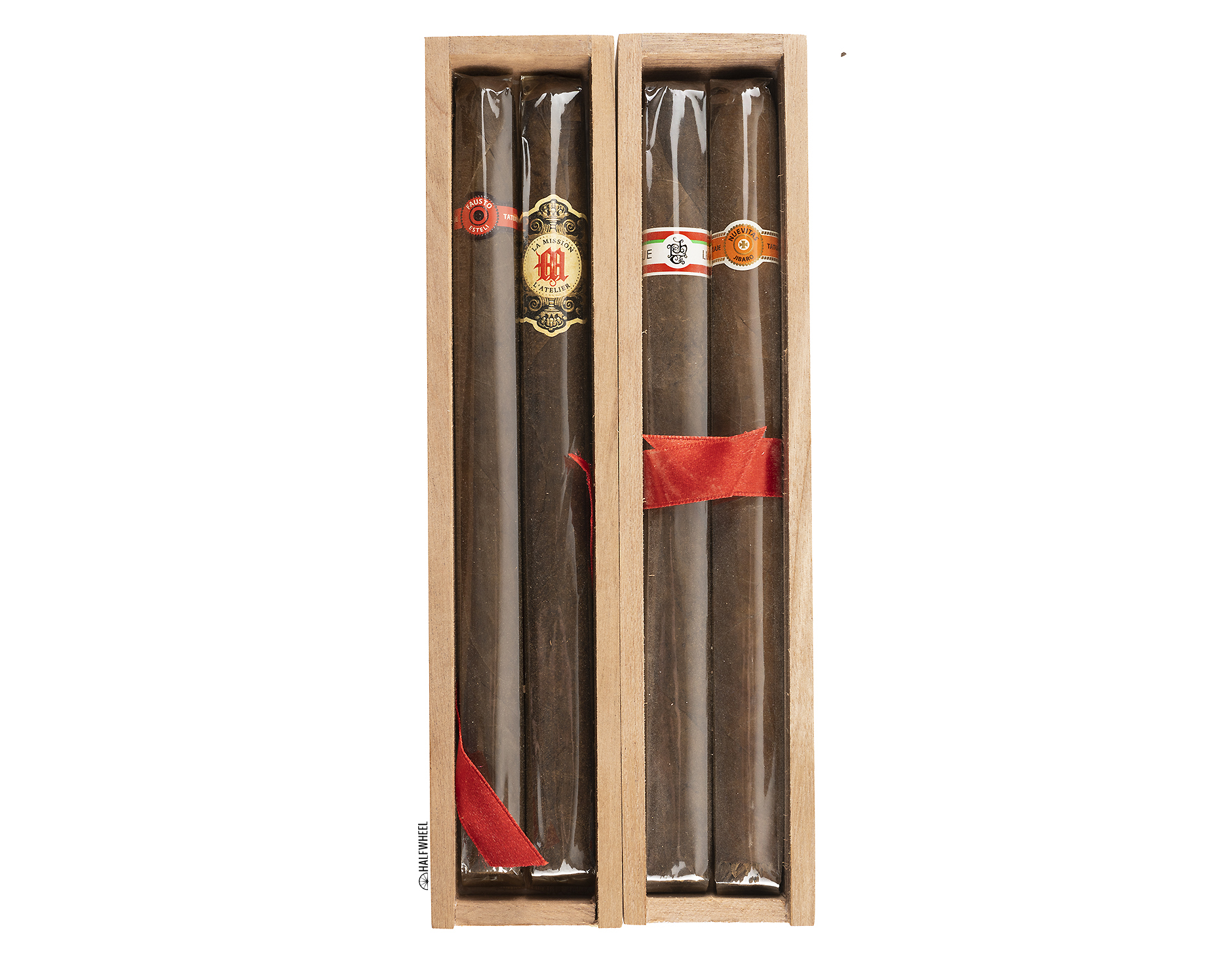 Earlier this year, Saints & Sinners Club listed another coffin containing two different A sizes from the 2016 release. This time, the cigars are the Tatuaje Limited Series Mexican Experiment and the Nuevitas Jibaro. It’s no surprise that the length of the La Mission L’Atelier 2020 is its most notable aspect, but as soon as I slide it out of its slightly tinted cellophane, I also notice that it’s box-pressed, likely making it the first box-pressed A that I have ever smoked. I wish I had a regular production La Mission handy as I can’t quite tell if the band on the cigar is bigger than normal, and I can pretty easily convince myself of either answer. The visible oils have largely departed the wrapper leaf, but there is still a bit of oiliness for the fingers. That said, the tactile sensation is driven more by the underlying texture of the leaf, which is toothy and on the granular side. Beyond that the wrapper leaf looks very good, even in color except for one strip used to create the cap that is a few shades lighter. Veins are generally small and scattered, the seams are visible but perfectly flat, and the cigar is finished off by a well-constructed fan of tobacco. I’m impressed by the firmness of the cigar, which has the firm, pillowy density of most box pressed cigars. The foot has an impressively complex aroma of almonds, baking spices, a bit of middle-of-the-road woodiness and some pepper, all of which come out in a soft yet nose-tingling aroma. Before I even get to think about the flavors on the cold draw, I pick up an interesting taste from the cigar itself. It’s something that reminds me a bit of stale almonds or biting into a pencil, neither of which are inherently bad or off-putting, but I wouldn’t say either are favorites. Air moves quite well, traveling smooth and easy through the long body of the cigar and offering a fairly light body with more almonds and general nut flavors, a very mild creamy sweetness, but no appreciable pepper.

The very first puff of the La Mission L’Atelier 2020 is a bit funky, almost as if the cigar was burning off something, but the subsequent puffs are much more enjoyable as they are packed with woods, a light but tongue-tingling pepper and a component that builds upon the pre-light nuttiness quite well. My first retrohale has a good amount of white pepper as well, certainly on par with what I would call the stimulation of an average cigar. The first inch picks up a bit more black pepper which seems to the cigar a slightly charred taste, still palate-friendly but a noticeable change from just a few puffs prior. At the one inch mark the ash has started to split and lean, so I’m quick to snag a photo of it before its pending detachment. While I know I’m smoking a unique vitola, the cigar performs just like any more typical vitola, putting off plenty of smoke, burning well and offering a problem-free draw. After a good number of puffs and minutes with this profile, the smoke gets quite creamy all of a sudden, holding onto a good chunk of the previous profile while layering this new one on. There is some sharpness building in the profile, most of which is driven by some new and building white pepper, though something else that I can’t quite put my finger on seems to drive the change as well. Flavor is generally in the medium range, sometimes a tick over and sometimes a tick under, while body is consistently medium and strength is more than mild but not imparting any kind of impact. Construction is very good as long as I take regular puffs, which deliver plenty of smoke while the burn line is staying even.

Building off the changes at the end of the first third, the cigar continues to explore a bit gruffer profile, bringing in earth and black pepper to shift things a bit. This change sets up a back-and-forth between this a robust flavor and one that puts creaminess front-and-center, which is both interesting and enjoyable. That is, until the finish of each puffs begins to get sharp and irritating on the throat, almost as if it can’t figure out which direction it should be going and as such short circuits a bit. Retrohales are still on point with a vibrant black pepper, somewhat thin in terms of body but not struggling whatsoever in delivering a nostril-pleasing experience. The flavor begins to dry out a bit, which leads to a bit more irritation, though I’m hesitant to say it’s unpleasant and can be easily soothed with a bit of water. and the combustion rate seems to have picked up a good bit, as it feels like there’s hardly enough time for me to take a few puffs and write down some thoughts. The second third is medium-plus to medium-full in body, though the finish is intense enough that I could make the case for calling it full. Body is medium-plus and strength is medium, though the very end of this section suggests a nicotine hit is coming. Construction and combustion remain very good. I don’t keep a running timer when I’m smoking a cigar, let alone any rate of puffing, it definitely seems like the final third sneaks up on me, even though I’ve working on the cigar for more than two hours. Ever since the midway point, the La Mission L’Atelier 2020 has more or less settled into a flavor profile of earth and pepper, though as the burn line approaches where the band would be I start to pick up two new additions, the first a wheat bread flavor, then a bit of thick chocolate. The latter reminds me a bit of a thick hot cocoa, not as sweet or pure as a bar of chocolate, and with just a bit less water or milk to give it that thicker expression. That thickness is also reflected in the body of the smoke and that the draw now has a bit of resistance to it; it’s firm in the sense of a well-made milkshake through a standard straw. Whatever aspect of the cigar that is causing some irritation is still doing its thing, thankfully a touch less irritating than earlier but still a part of the experience I’d prefer to jettison. There’s a bit more of a toast flavor as the burn line progresses, and while I previously thought that there would be more nicotine strength, that hasn’t materialized by the time I take the final picture. The first point to discuss with any gran corona or A vitola is how did it perform technically, as due to its unique length, the draw and combustion can be a bit of a challenge. In the case of the La Mission L'Ateiler 2000, construction is the least of my concerns, and is certainly among the best of the As that I have smoked. Flavor-wise, there is little to complain about, and I would argue that the first half of the cigar is one of the better I have smoked in recent memory. What concerns me about the La Mission de L'Atelier 2000 is that there are just enough spots where throat irritation is part of the equation. I find it interesting that it is still so prevalent after nearly five years since it was made, though it gives me optimism that the cigar has a good amount of time ahead of it to be enjoyed. The La Mission L'Atelier line is one of the brand's best, and while this vitola is quite good with some drawbacks, it is a good reminder of how good the blend can be, in whatever vitola you choose to smoke it.