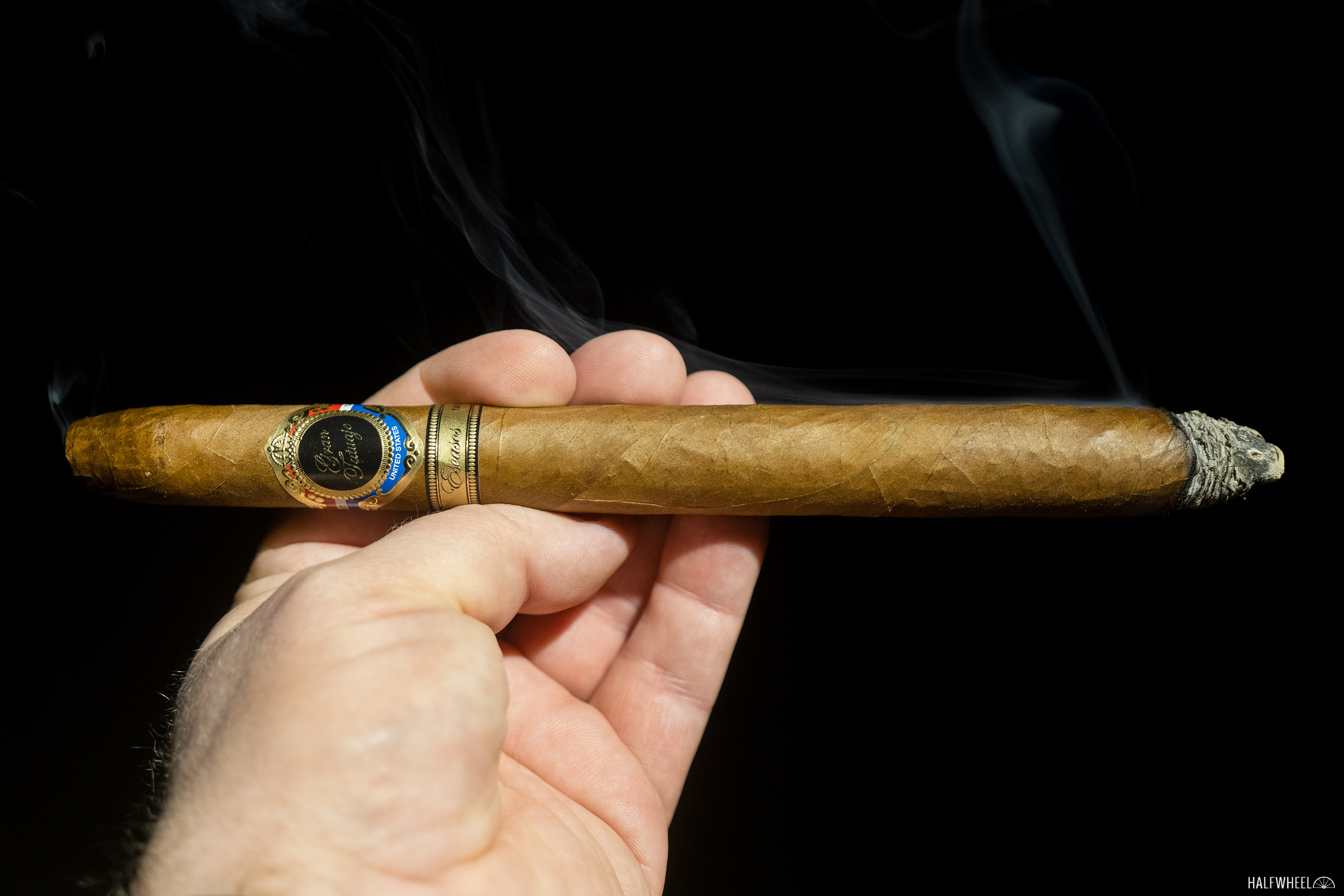 It has been said that the only constant in life is change, and that is an accurate way to describe the newest line from Tatuaje Cigars, Inc. which has gone through a few different iterations before the company ended up with the finished product that is now being sold to consumers.

The finalized line is named Escasos—which translates as scarce or rare from Spanish—and as its moniker suggests, is made up of extremely limited cigars rolled at the El Rey de Los Habanos factory located in Miami. According to Pete Johnson, Tatuaje’s owner, the impetus behind the new series was inspired by Cuban-made custom rolled cigars, which have historically been made by specific rollers utilizing their own blends in the small island country.

However, the series has been through some changes along the way. Long-time fans may remember at least two releases in the line, the first being the La Petite Eglise, which was mentioned as far back as 2013 when Johnson discussed it as an event-only cigar for the U.S. market. Fast forward to 2017, when Johnson changed things up a bit by announcing that it and a new cigar named Clos L’Église would instead be European exclusive releases set to be sold in spring 2018. At the time, the original intent was to roll the two Église cigars at the My Father Cigars, S.A. factory in Nicaragua.

In addition, Tatuaje showed off a 9 1/2 x 55 double perfecto carrying the name Gran Tatuaje during the 2018 IPCPR Convention & Trade Show. At the time, it was sporting a different band and there was no mention of it being part of the Escasos line, other than some vague references to a series of Miami-made cigars.

All of that changed in October 2018, when the Escasos series was announced, albeit with few details. New versions of Tatuaje’s Selección de Cazador line—aka the Brown Label—were added to the series in March 2019, and the entire line was shown off in full during the 2019 IPCPR Convention & Trade Show, including the new 5 x 50 Petite Eglise. So far, Johnson has been mum on the blend’s details other than that the Escasos cigars incorporate all Havana-seed tobacco.

“All Cuban seed tobaccos and production on all Escasos from Miami including the HUNTER Escasos and the Luxury Escasos are made in limited quantities,” said Johnson in an email to halfwheel. “The sizes of the four Luxury Escasos will eventually add additional sizes of each name. For example there will be an additional Gran Cazador. Similar style of cigar but in a different size.” 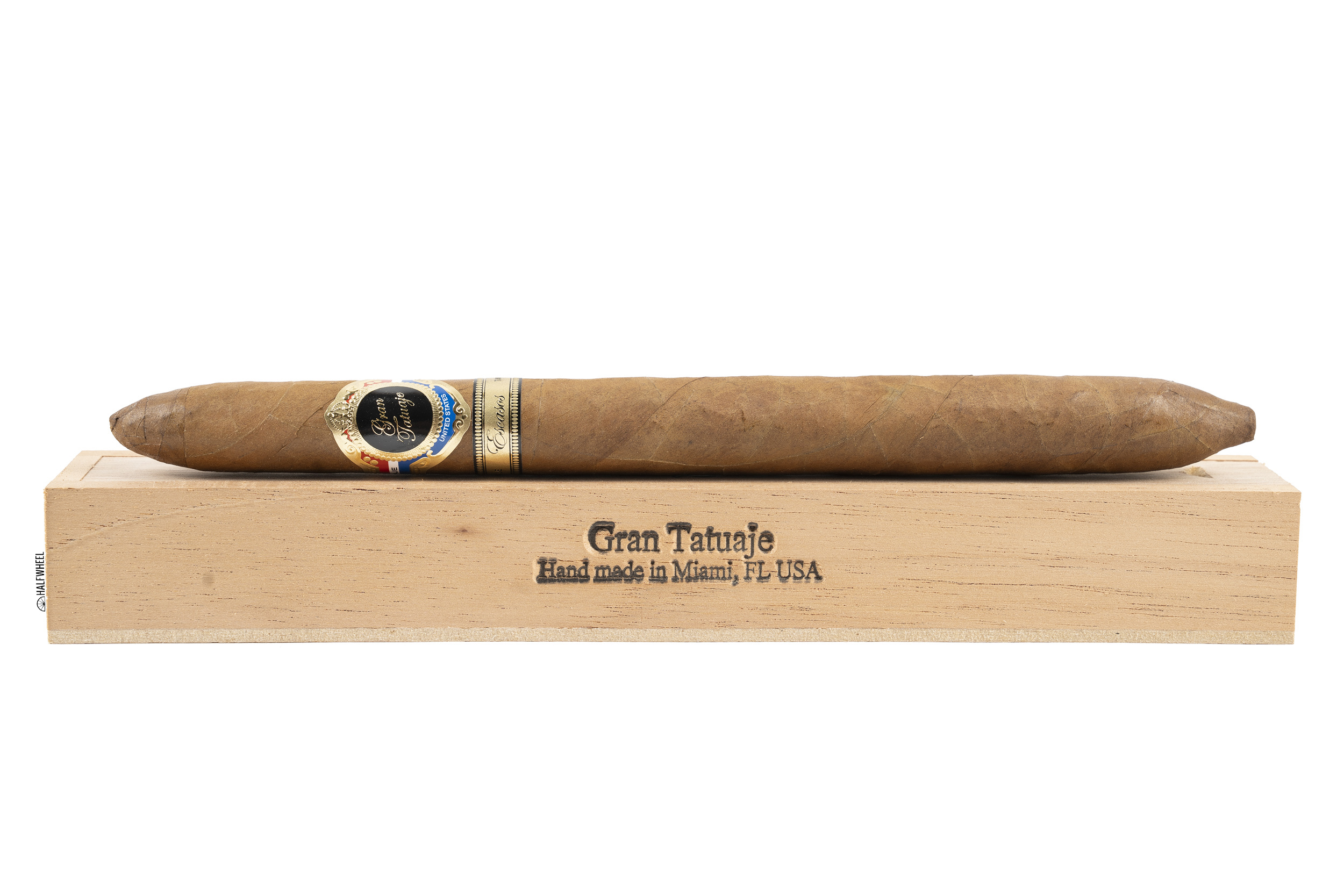 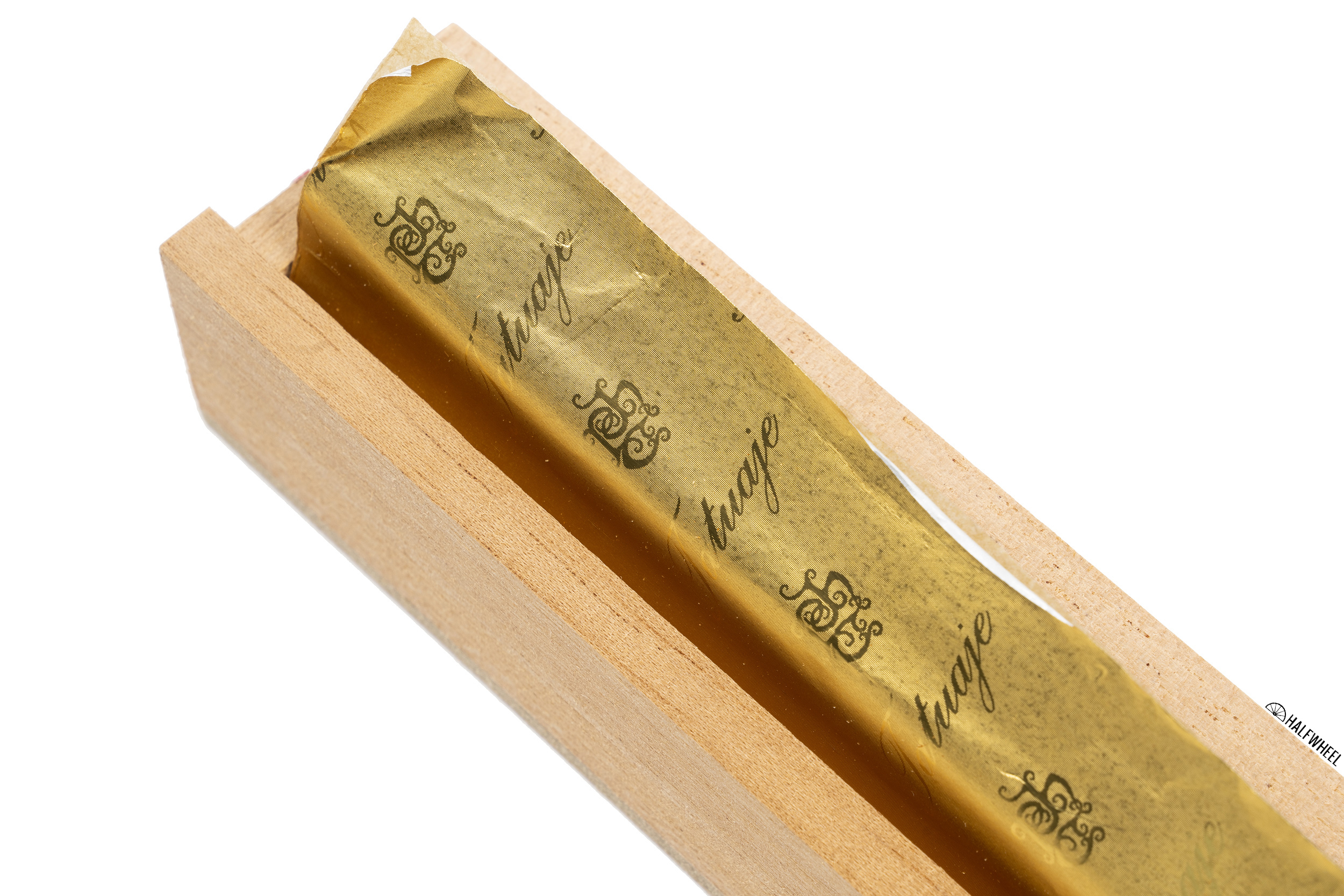 As for the subject of this review, the Gran Tatuaje vitola is packaged inside individual coffins in boxes of 10 with each cigar carrying a retail price of $67, easily one of the most expensive cigars that Tatuaje has ever released. In addition, Johnson has stated that only one roller produces the Gran Tatuaje vitola, someone who is not only the oldest roller at the factory, but who has been at the factory since Tatuaje started as a brand.

So far, there have been 10 different releases in the Tatuaje Escasos line: According to Johnson, the first batch of the Escasos Gran Tatuaje was shipped in November 2019. In addition, while there will be more shipments in the future, at the moment they are available at only three stores: 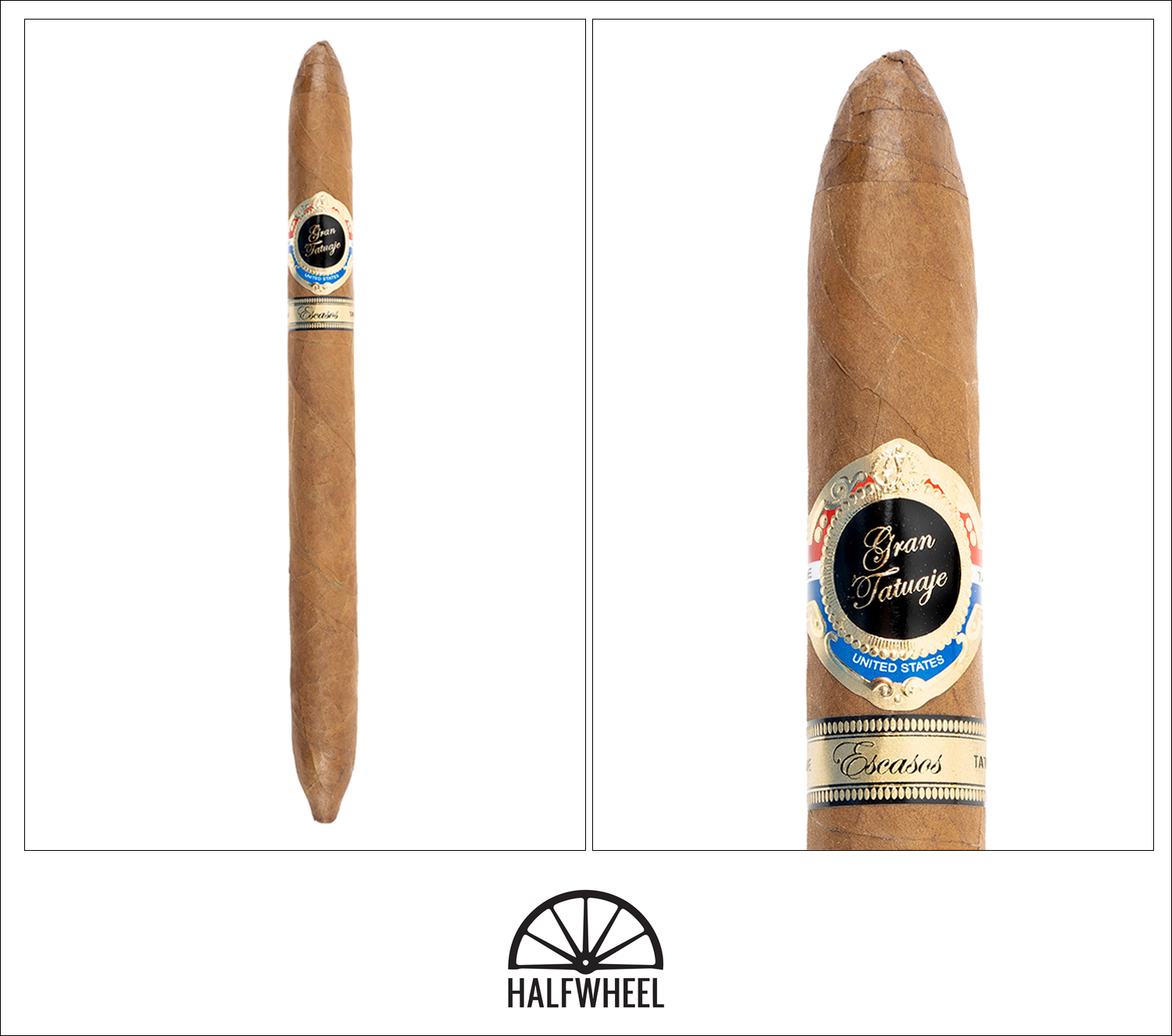 Visually, the Tatuaje Escasos Gran Tatuaje screams quality from the moment I open the coffin to see the gold foil wrapping. The wrapper is soft and supple, with a light milk chocolate color and an abundance of oil all over it. While it is quite firm when squeezed, there is not a soft spot to be found regardless of how much I inspected. Aroma from the wrapper and foot is a combination of strong spicy cedar, leather, orange citrus, cinnamon and sweet chocolate while the cold draw brings flavors of the same spicy and aromatic aged cedar, creamy nuts, leather cocoa nibs, cinnamon and coffee beans.

As is often the case with cigars that have a combination of this size and nipple foot, the Gran Tatuaje takes a little while to get started, but once the foot is fully lit, I start to easily discern flavors that follow the cold draw almost exactly: creamy peanuts, spicy cedar, leather, espresso beans, cocoa nibs and cinnamon. While there is a bit of spice noticeable on my tongue at first, it begins to recede almost immediately. In addition, there is plenty of both honey sweetness and white pepper on the retrace, both of which don’t seem to be receding any time soon. In terms of construction, although the draw is a bit tight to start—not at all unusual for vitola like this—it quickly gets better as the burn passes the crown of the thickest part, while the burn is wavy but not near bad enough to need touching up yet. The overall strength starts out extremely mild before increasing a little, hitting a point firmly between mild and medium by the end of the first third.

Although the combination of spicy cedar and creamy peanuts continues to dominate the second third of Gran Tatuaje, a new rich charred meat flavor is added to the profile as well, where it combines with other notes of earth, dark cocoa, cinnamon, leather and espresso beans. Both the spice on my tongue and the white pepper on the retrohale from the first third continue to recede, which in turn allows the honey sweetness to increase in strength. With the still wavy burn now well past the bulb of the foot, the draw is now giving me plenty of resistance, and the smoke production is extremely dense off the foot. Strength-wise, while the overall strength does increase, it is just not enough to have any serious impact on the profile, ending up still under the medium mark by the time the second third ends. Despite the thinning ring gauge, there is not much change in the Tatuaje Gran Tatuaje during the final third, with the same spicy cedar and creamy peanut combination easily topping the rest of the lesser flavors that now include hay, leather, earth, dark chocolate, cinnamon, bread and a touch of floral. Although the white pepper and spice on the retrohale are all but gone, the honey sweetness has increased in strength again, easily becoming a major part of the profile. Construction-wise, the draw continues to impress, and while I do have to touch up the burn once early on, I never have to even think about it after that. Finally, the overall strength in the Gran Tatuaje ends up increasing a bit compared to the second third, enough to push it over the medium mark by the time I put the nub down with a bit more than an inch left. I don’t mind saying that the first time I saw the Tatuaje Escasos Gran Tatuaje in my hand, I was a more than a little intimidated and as expected, the combination of length and large ring gauge on each cigar ended up taking a long time to finish. What I found was that the one thing you must do with this cigar is the one thing you are going to have to fight to do with a vitola this size: take it slow, take it easy. Drawing on this release too hard or too fast—or a combination of both—results in an immediate backlash for your palate, although the bitterness does dissipate fairly quickly after you slow down again. If you can do that, the profile—while light and airy—is full of flavors that include roasted peanuts, spicy cedar, dark chocolate and an undertone of honey sweetness. It is neither a quick nor an easy process, but if you have the time and patience to give the Gran Tatuaje the attention it deserves, you will be rewarded.