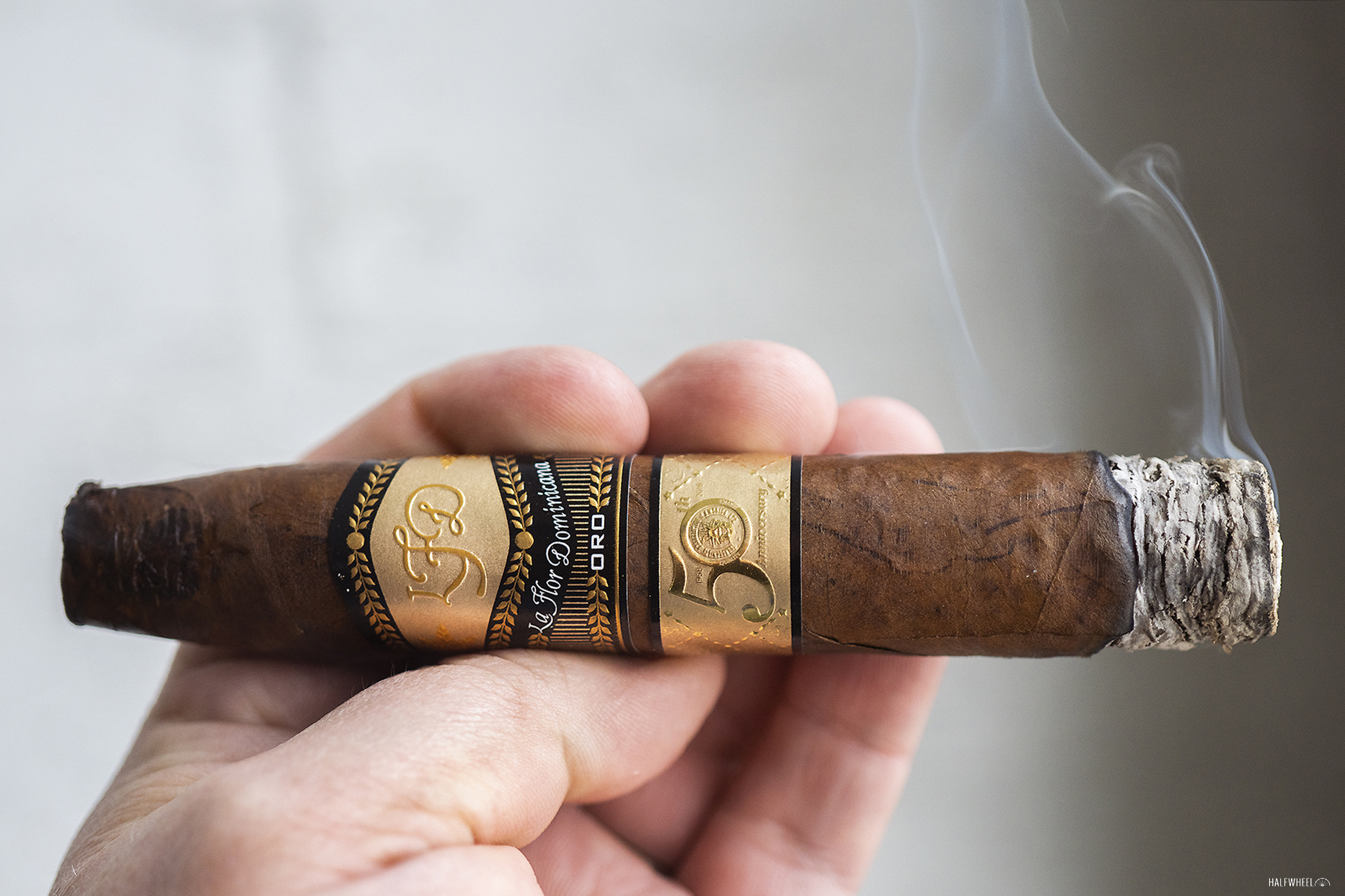 In 2018, La Flor Dominicana released the La Flor Dominicana TAA 2018 Golden “Oro” Anniversary, which—as the name implies—was created specifically for the 50th anniversary of the Tobacconists Association of America (TAA). The 6 1/2 x 54 torpedo was not only made up of a Nicaraguan sun grown wrapper covering a Dominican binder and Dominican fillers; interestingly, one of the filler tobaccos was a Dominican criollo 99 leaf that the company had not used before.

For those who don’t know the specifics of the TAA organization, my colleague Charlie Minato expanded on it in a news story:

One year later, La Flor Dominicana released the same blend in a new vitola—6 1/2 x 54 toro—while also adding a new wrapper option in the same size, namely a Mexican San Andrés leaf. As was the case with the 2018 version, the filler for both releases included the Dominican criollo 99 filler that was grown specifically for these releases.

In March 2020, the company announced the next releases that would be exclusive to retail members of the TAA, a pair of 6 1/2 x 58 box-pressed cigars rolled in La Flor Dominicana’s signature cap nicknamed the Chisel, which is a box-pressed torpedo vitola that is made with a cap which is shaped somewhat like a flathead screwdriver. The cigar was named the La Flor Dominicana TAA 52nd Oro Tercera Edición, and once again there were two different versions, each of which are made with the same internal blend: both incarnations are made with a Dominican binder and Dominican fillers, including the aforementioned Dominican criollo 99 tobacco that the company uses only in its TAA releases. The difference between the two blends lies in the wrappers: the natural version incorporates a Nicaraguan Sun Grown wrapper, while the Maduro version is made with a Connecticut broadleaf wrapper.

However, March of 2020 was also the start of the COVID-19 pandemic altering the world and the cigars were delayed. Almost exactly a year later, in March 2021, La Flor Dominicana announced that those two cigars would instead become its 2021 TAA releases. While the blend remained the same for both cigars, the name was changed to the La Flor Dominicana TAA 50th Oro Tercera Edición. At the time, the company announced that while the name and shipping date had changed, the blends for both cigars would remain the same.

It would not be until January of this year that the La Flor Dominicana TAA 50th Oro Tercera Edición would begin shipping to TAA retailers; or at least, half of them. Specifically, the Maduro version, which shipped first starting the final week of January followed by the Natural version about six weeks later. Both cigars carry an MSRP of $23 and are packaged in 20-count boxes, but as is the case with many of its limited release cigars, La Flor Dominicana has not disclosed the number of TAA 50th Oro Tercera Edición cigars it is producing.

There have been five different TAA Golden “Oro” Anniversary releases so far. 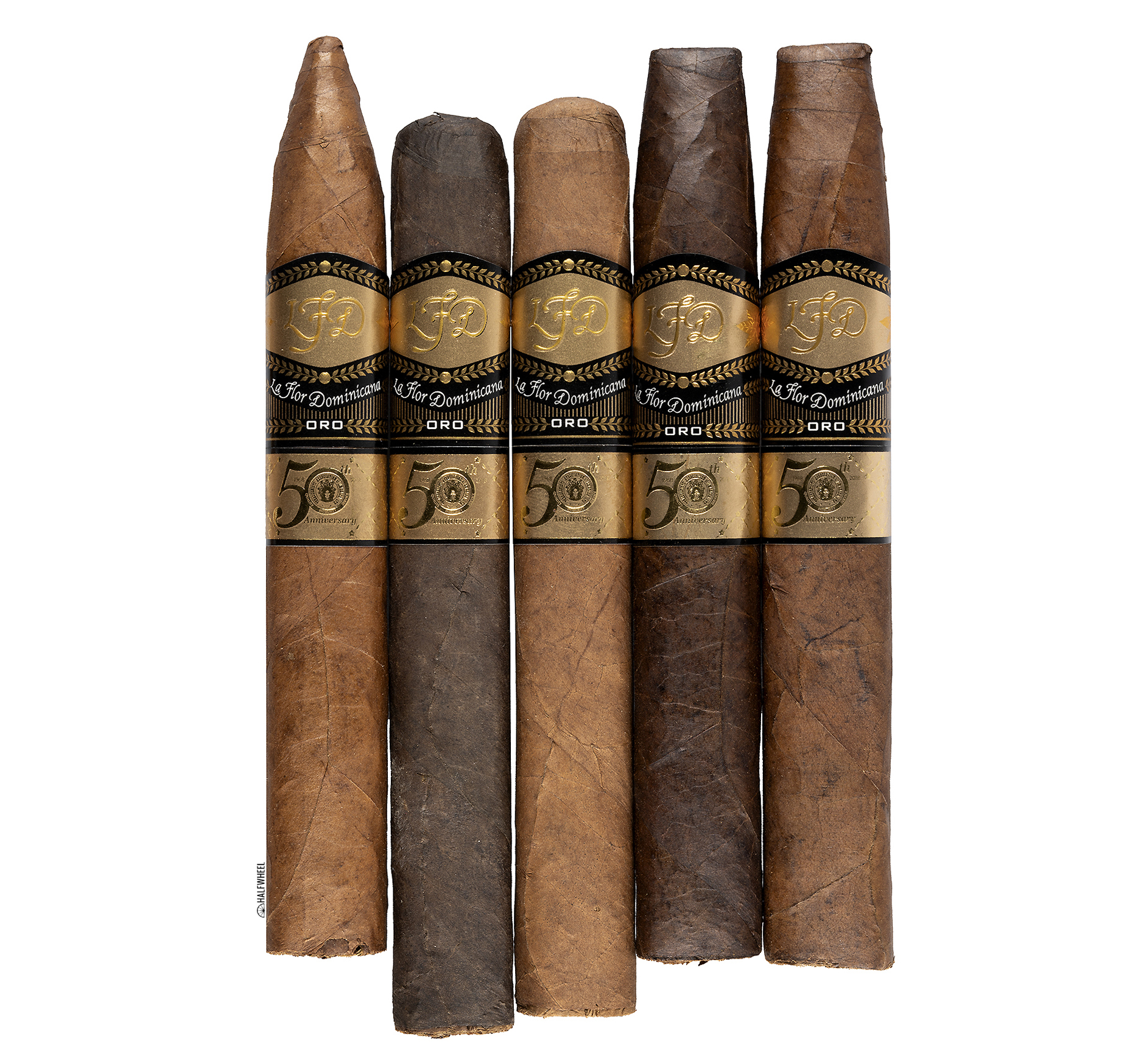 Finally, the TAA 50th Oro Tercera Edición will not be the last TAA release for La Flor Dominicana this year. The official La Flor Dominicana TAA 2022 cigars will be 7 x 64 salomones that will once again sold in both Maduro and Natural versions that are scheduled to begin shipping in late fall. 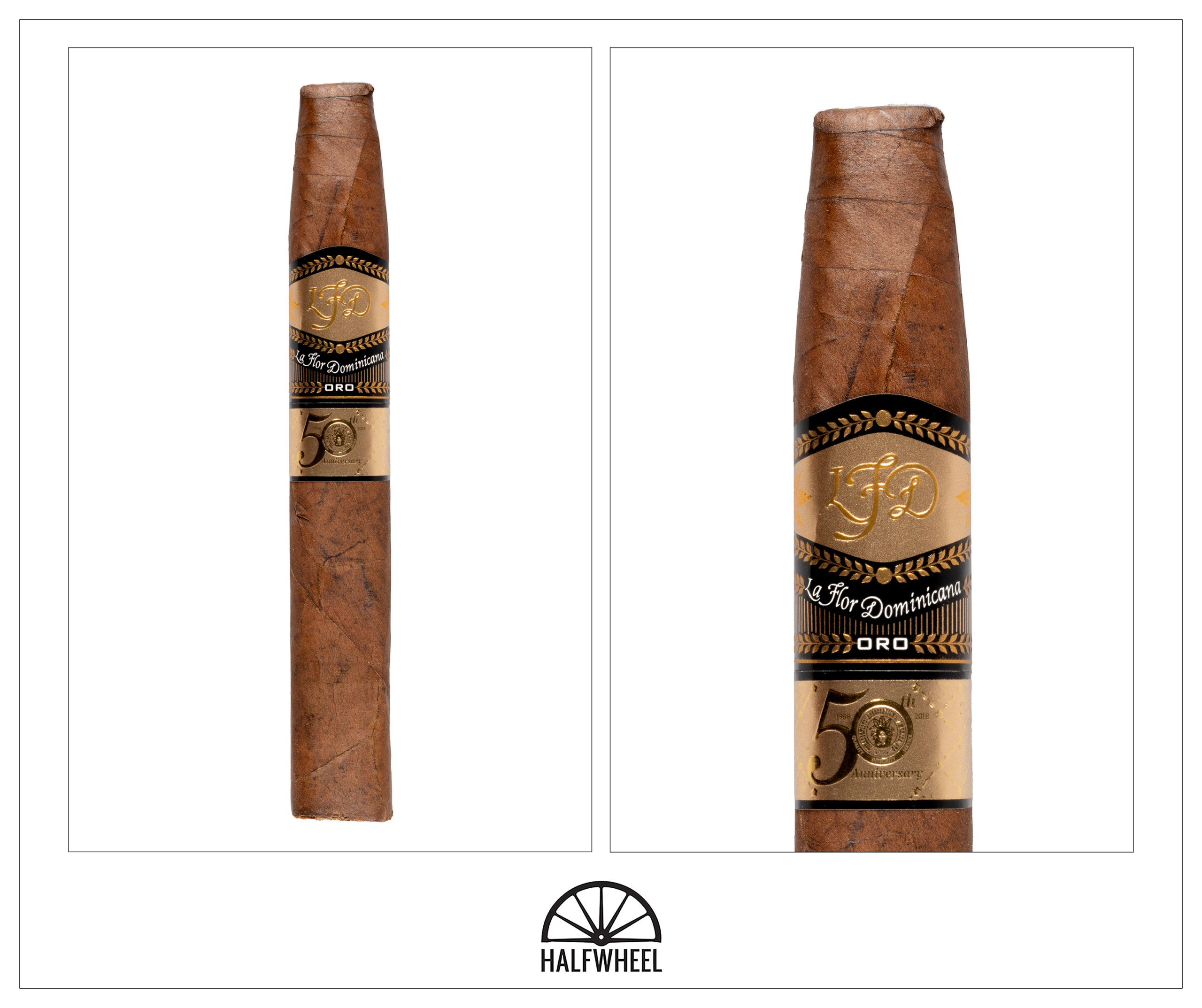 Visually-speaking, the Chisel has always been one of the more unique cigar shapes I have seen, but the La Flor Dominicana TAA 50th Oro Tercera Edición Natural takes it one step further with its dark chocolate brown wrapper that features an obvious reddish tint. In addition, that wrapper is silky smooth to the touch—no doubt helped by a noticeable amount of oil—and while it does have a soft box-press, it is also nicely firm when squeezed. There are also quite a few aromas emanating from the wrapper, a list that includes strong sweet hay, cedar, manure, generic nuts, creamy leather, earth and bready sweetness. However, the notes from the foot are almost completely different, with a strong cashews mixing with black pepper, cedar, cocoa nibs and vanilla sweetness. After pinching the cap—more on that below—the cold draw features flavors of distinct aged cedar, barnyard, hay, baker’s spices, roasted espresso beans, dank earth, cinnamon and figs.

Aged cedar and earth start two of the TAA 50th Oro Tercera Edición Naturals off—the third sample began a bit harsher on the palate, but calms down and falls into line after about 10 puffs—and while the former sticks around to become one of the top flavors, the latter is quickly replaced by a powdery cocoa nibs note. Secondary flavors of brewed coffee, cinnamon, nutmeg, leather, anise, hay and light citrus flit in and out, while some significant spice is noticeable on my tongue. The retrohale is a bit restrained, but I can still easily make out both black pepper and a fig sweetness that is seemingly pulled from the cold draw. Flavor and body end the first third just under medium, while the strength is a bit lower at a point firmly between mild and medium. In terms of construction, there were no issues whatsoever on any of the three samples, including effortless draws, plenty of thick smoke and burn lines that need no attention.

The second third of the cigar is like night and day compared to the first third, starting with the main flavors: cocoa nibs continues to be one of the top notes, but following close behind is a distinct almond flavor that has replaced the cedar. Additional notes include creamy cedar, leather tack, cinnamon, nutmeg, sourdough bread and dank earth, while one sample features a distinct pencil lead flavor for a few puffs. The retrohale has also mellowed significantly, with less black pepper and a new, interesting sweet teriyaki flavor that replaces the fig sweetness from the first third. Flavor bumps up to medium plus, the body is at a solid medium and the strength increases dramatically to hit a point just over medium by the time the second third comes to an end. Construction-wise, the burn, draw and smoke production seem to be working in almost perfect harmony, with no issues that I can discern. 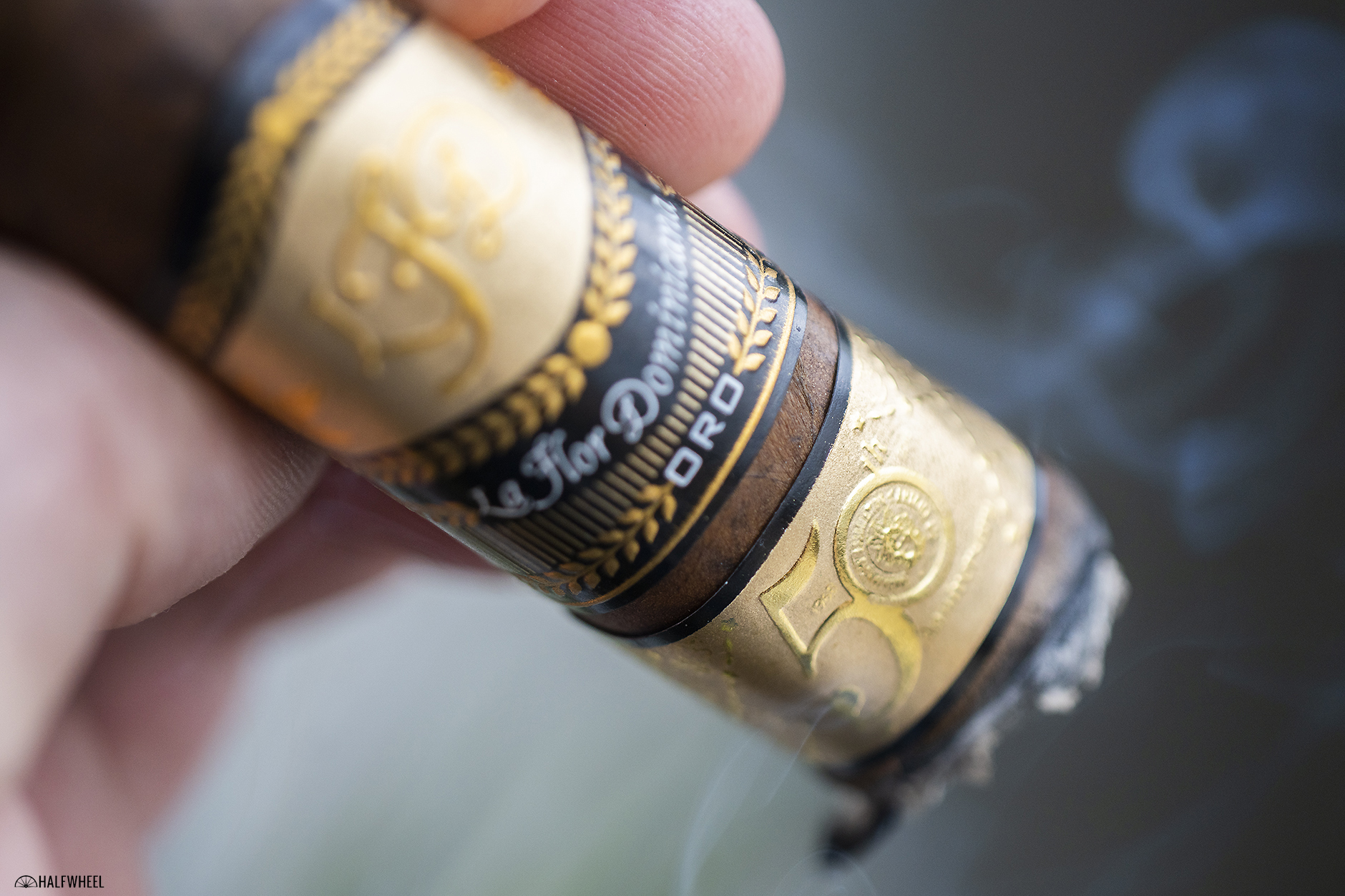 While the final third of the 50th Oro Tercera Edición Natural is not quite as complex as the preceding third, the profile still has plenty left to give. That includes the top flavors of almonds and dark chocolate, which—while not quite as distinct as before—are still leagues stronger than the other notes of earth, toast, leather tack, barnyard, espresso beans and slight cinnamon. However, the retrohale is still going strong, with the levels of both the black pepper and sweet teriyaki flavor around the same strength as they were in the second third. Flavor remains at medium plus and the body has increased to slightly above medium, but the strength easily hits a point very close to full by the time I put the nub down. Unfortunately, while the draw and smoke production continue along their excellent paths until the end, the draw on two of the samples become problematic enough to need corrections with my lighter, although they are fine after that. 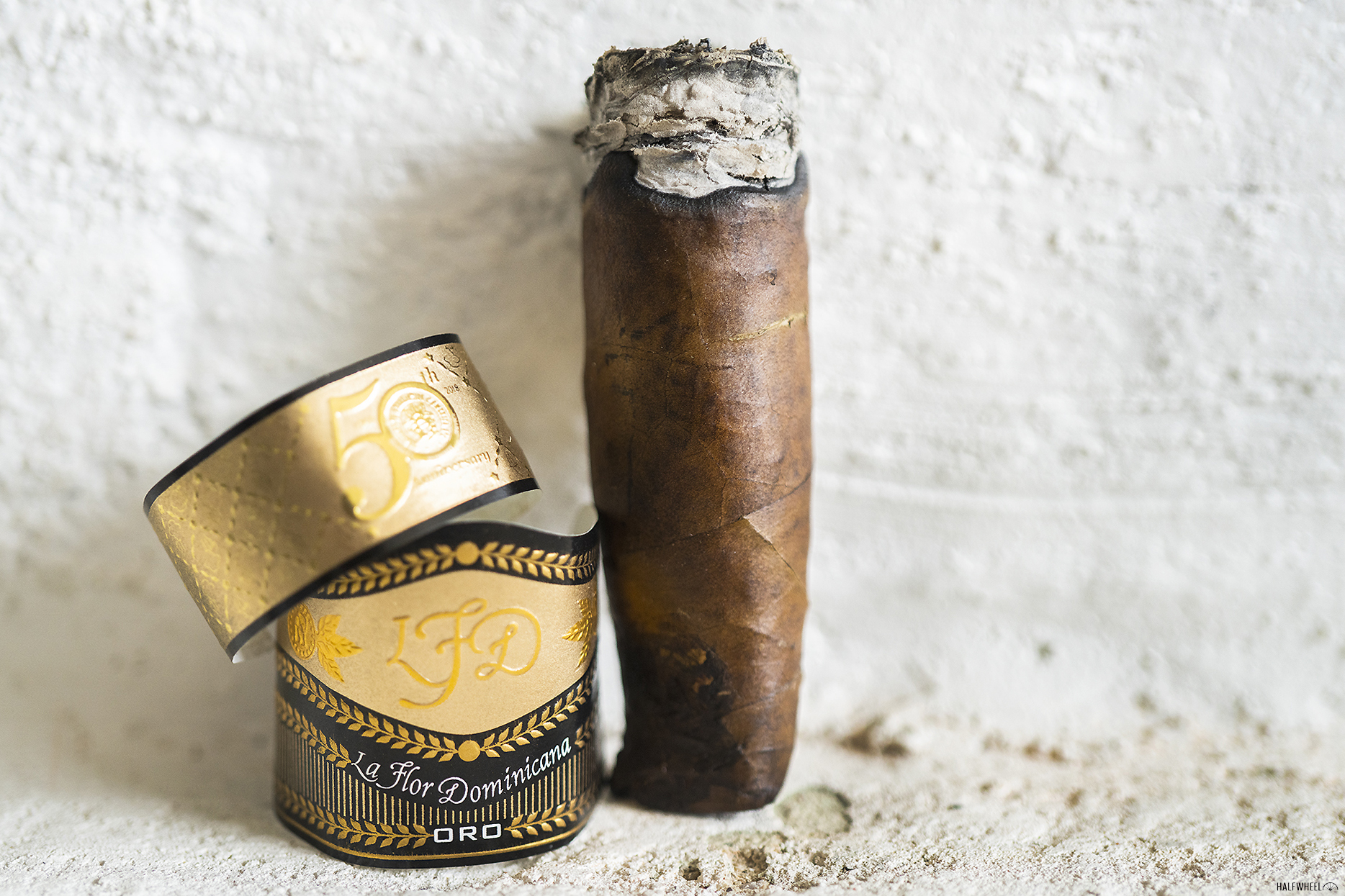 After a better than standard start, the profile of the La Flor Dominicana TAA 50th Oro Tercera Edición Natural really hits its stride during the final two thirds. In fact, after that point there are flavors galore, accentuated by main notes of dark chocolate and almonds along with an extremely interesting sweet teriyaki on the retrohale. While there were some minor issues when the strength hit a point just under the full mark by the middle of the final third, it was never so strong that it threw off the balance in a significant way. Full of flavor and strength, the La Flor Dominicana TAA 50th Oro Tercera Edición Natural is a very enjoyable cigar that would be perfect to smoke sitting around a fire after eating a large steak.