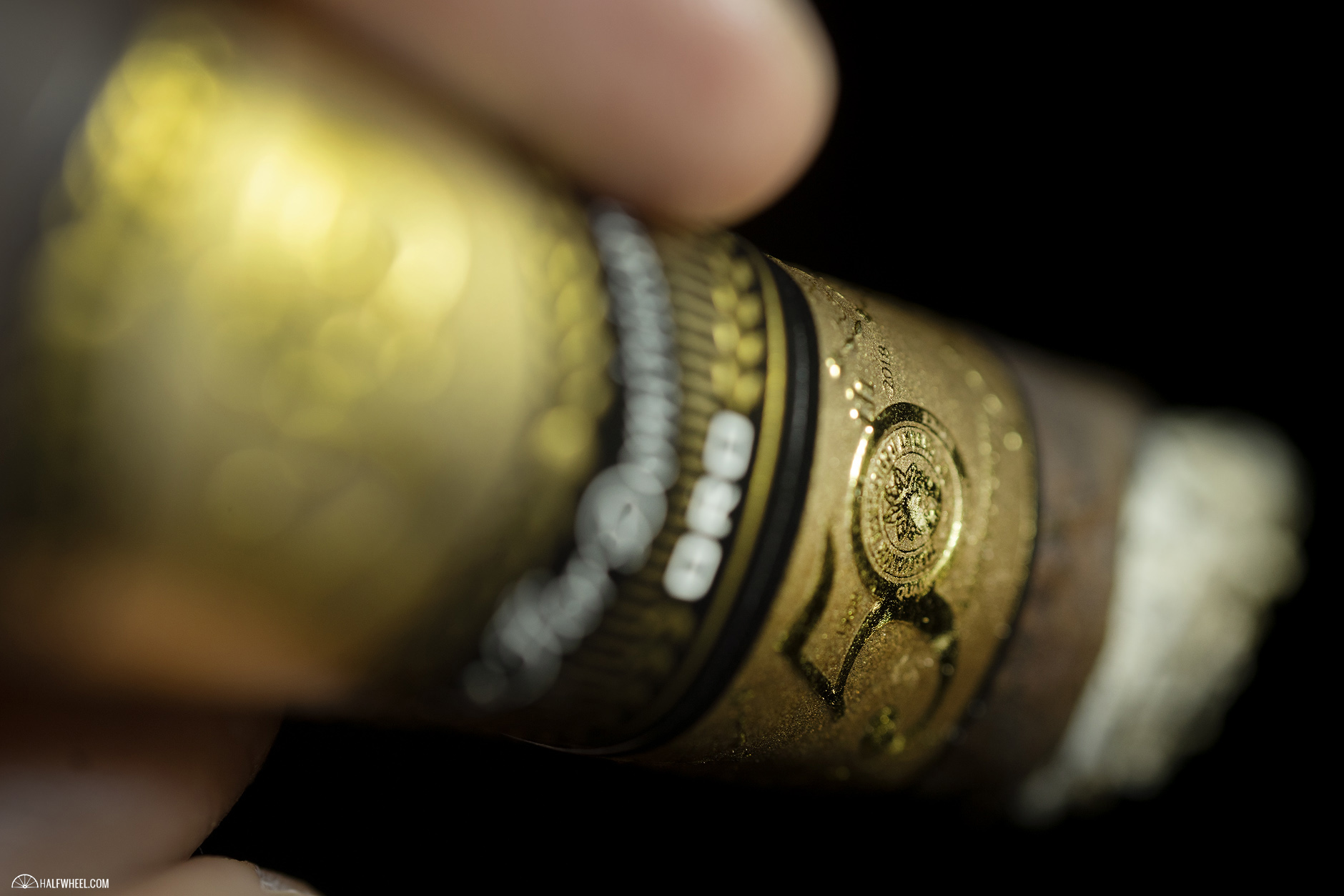 Last year, the Tobacconists’ Association of America (TAA) celebrated its 50th anniversary and La Flor Dominicana—like more than a dozen other companies—celebrated by releasing a special cigar to mark the occasion. This year, the organization turned 51, but yet, La Flor’s golden anniversary release is back.

The La Flor Dominicana TAA 50 Segunda Edición is an extension to last year’s release. It keeps the same blend, pretty much the same packaging and it’s once again only available to TAA stores. It’s also the same dimensions—6 1/2 x 54—though this year’s version is a box-pressed toro instead of the torpedo size that the company released last year. There’s also a second wrapper option, though the filler is the same regardless: a Dominican binder and Dominican fillers including criollo 99 that is specifically grown for this blend. It’s offered in either Natural, with a Nicaraguan sun grown wrapper—the same as last year’s blend—or Maduro, a Mexican San Andrés leaf. 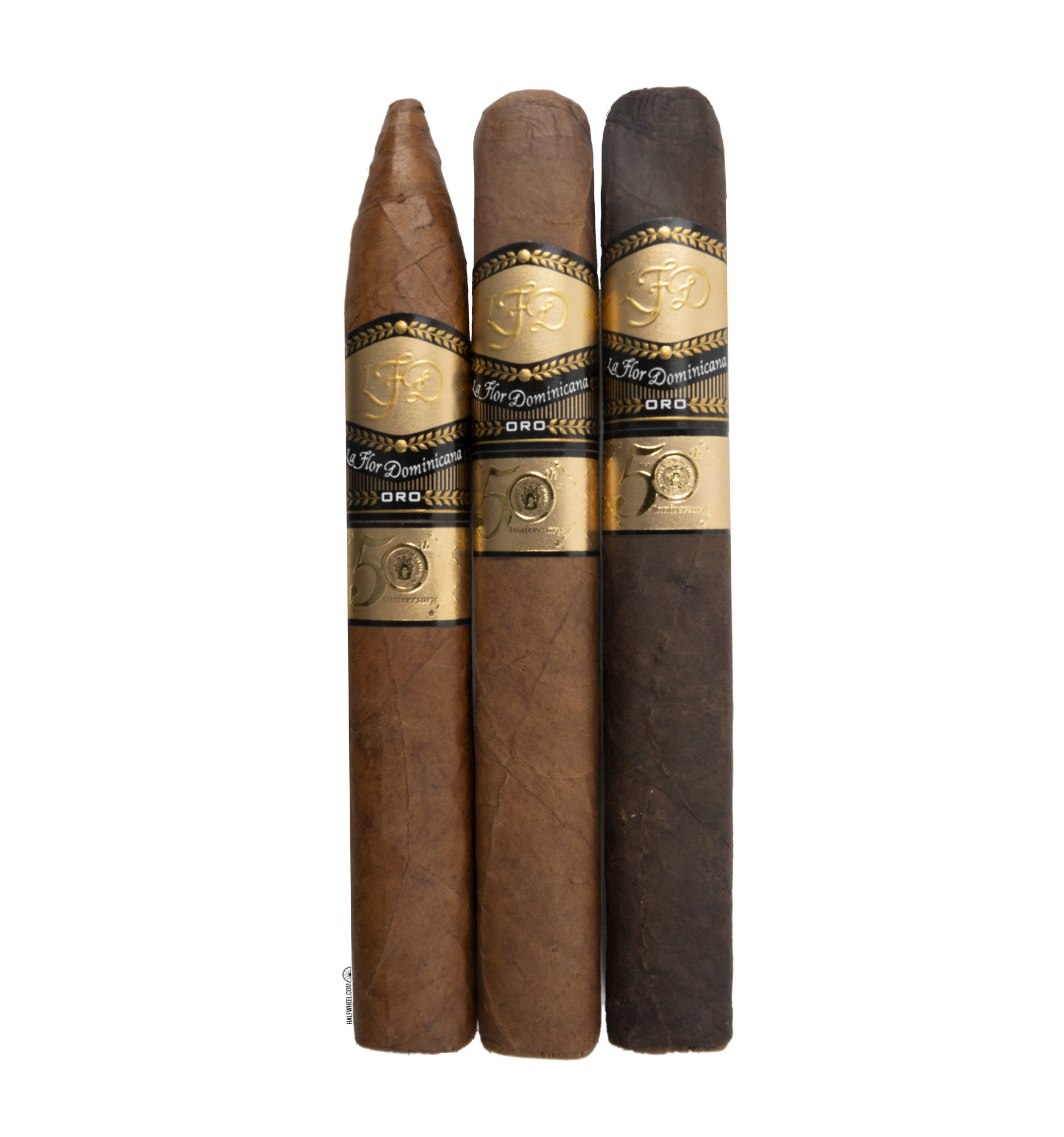 There’s some markings on the box that indicate this is the 2019 release, known as Segunda Edición, second edition, though the bands remain the same as last year. While the color scheme and design of the box is pretty much the same, the box has been cleaned up a bit. Last year’s release featured artwork that Tony Gomez designed in the WhatsApp app on his phone, whereas this year’s design uses some more refined fonts instead of finger-drawn art.

Both versions of the cigar retail for $20 and are limited, though as has often been the case with limited La Flor Dominicana releases of late, the company is declining to disclose the number of cigars it is making.

As for the organization that the cigar is being made for, the TAA is a fairly small group of some of the country’s top tobacconists, about 80 retailers as well as 40 or so manufacturers. The association gathers annually to discuss issues facing the industry and retailers, as well as to have its annual trade show, a unique event that works on a group buying format in order to secure exclusive deals for these generally high-volume merchants who often operate multiple retail locations. 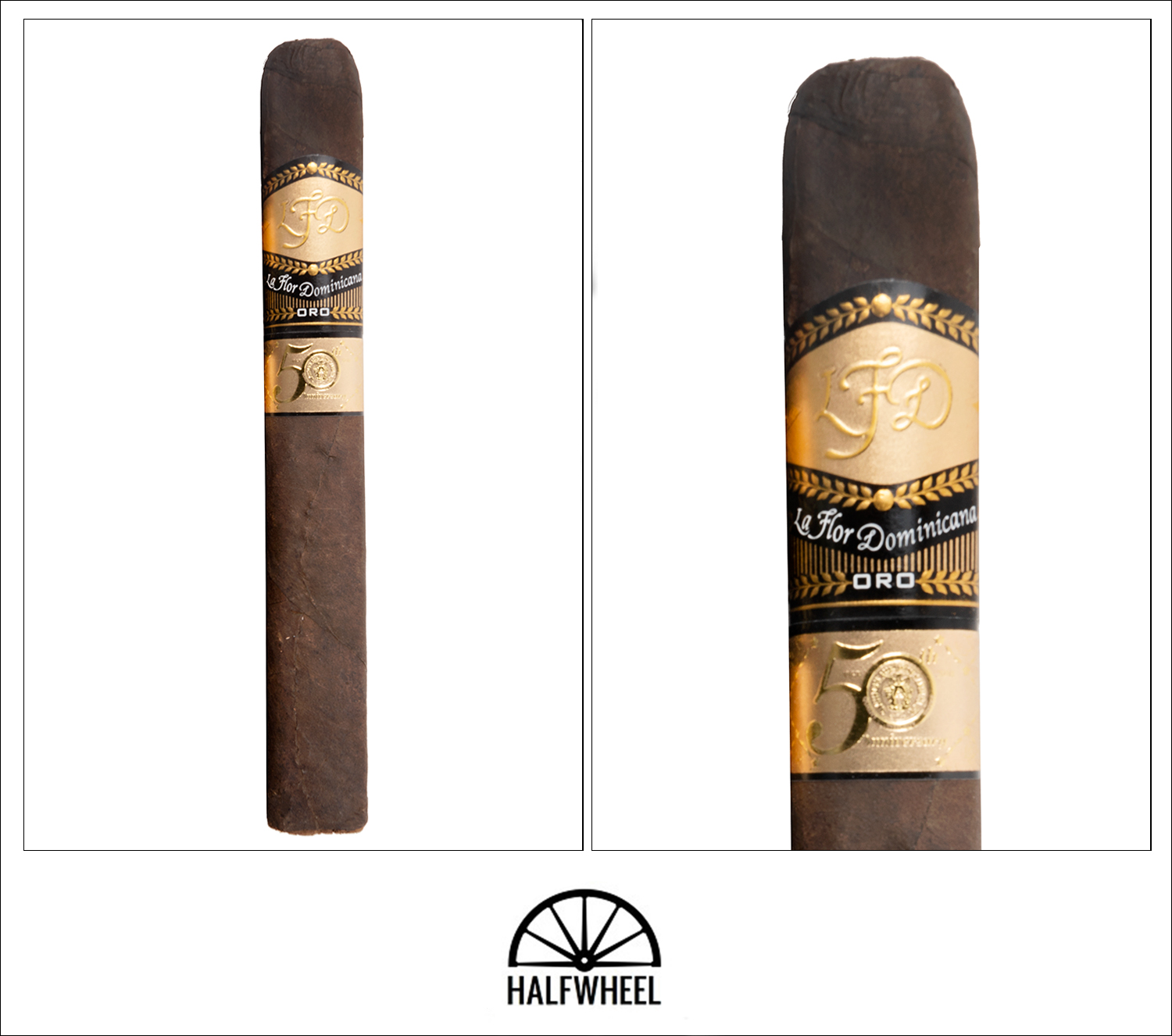 There’s a rather dark maduro wrapper covering this cigar and its sharp rectangular press, so in other words it looks like the proverbial chocolate bar we sometimes mention. It’s somewhat interesting that despite the gold name, the cigar really has zero golden color—something that applies to the natural version as well. Aroma off the wrapper is medium-full, though I imagine it would be full if the cigar had been stored in cellophane. There’s a lot of acidity along with some barnyard and a charcoal character. The foot has some generic jasmine rice, creaminess, bark and a mustard funk—a rather interesting mix of very developed flavors. Cold draws are a bit open on each sample with plum, cocoa and some creaminess, making it fairly sweet.

Given the peculiar flavors during the pre-light inspection of the Segunda Edición, it comes as no surprise when the initial flavors once the cigar is lit are a bit odd. There’s some plain ramen noodles, a wet earthiness and faint hints of paprika, all sort of wrapped by a woodiness. All together, it’s somewhat reminiscent of a younger OpusX profile. The first third develops into a core of earthiness, popcorn and some toastiness, though the latter is not as defined as the pre-light note. It’s earthy and creamy on the finish, the latter of which is a great addition to the otherwise dry profile. Retrohales have popcorn and peanuts, which doesn’t particularly alleviate my complaints about the dryness. Flavor is full, while body and strength are both medium-full. 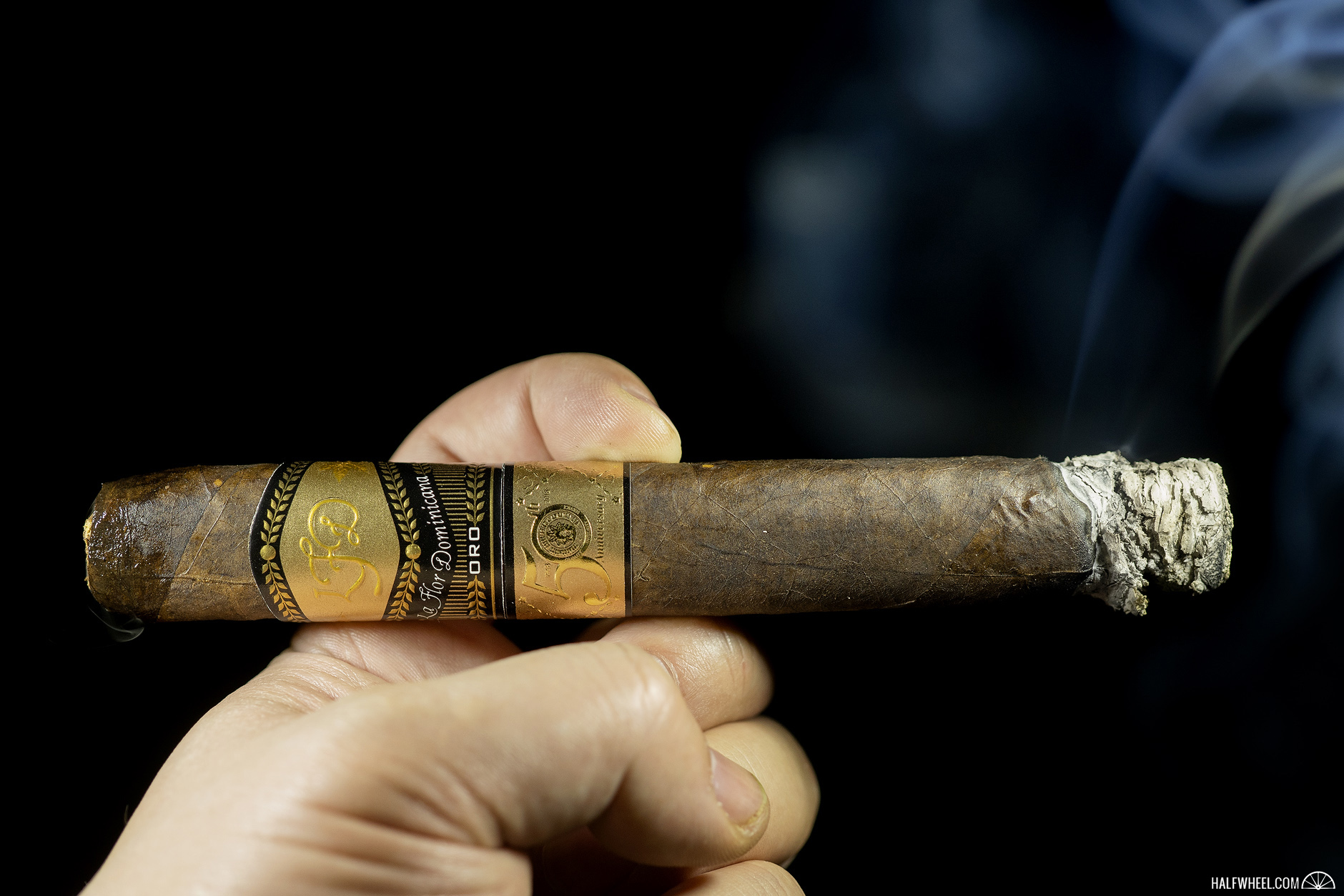 The second third of the La Flor Dominicana has earthiness along with burnt coffee, lemon peel, a whole-grain bread and some more of that generic toastiness. I was hoping to rediscover that charcoal flavor that I found when smelling the unlit foot, but it’s just not there. What’s also not really to be found is pepper; instead, there’s just a lot of spice all over the tongue from the La Flor. Retrohales are rather similar to the first third, peanuts and popcorn, though it’s a bit less intense than the earlier parts. What’s rather different is the finish, now much cleaner with some walnuts, orange peel and an underlying saltiness. Flavor is medium-full, body is full and strength is close to full. At times the Segunda Edición Maduro shows signs that it might be tunneling, but actual tunneling never occurs and I’m never forced to touch up the cigar.

With an inch and a half left, there’s finally signs of the charcoal, though it’s not as rich as I remember it being some two and a half hours ago. Some of that is probably due to the other flavors that I am picking up in the final third of the La Flor Dominicana: earthiness and saltiness. Retrohales finally show a change, and it’s a dramatic one: strawberry, lemon, creaminess and earthiness. The finish has nuttiness, Nilla wafers, saltiness and creaminess. Intensity finishes a bit all over the place. One sample is medium-full, the other one is pretty much full and the other sample is very full. All three of the cigars are rich in nicotine by the last two inches, but the flavor and body varies a bit. Two samples need touch ups in the final third, largely just to keep smoke production above the anemic level. 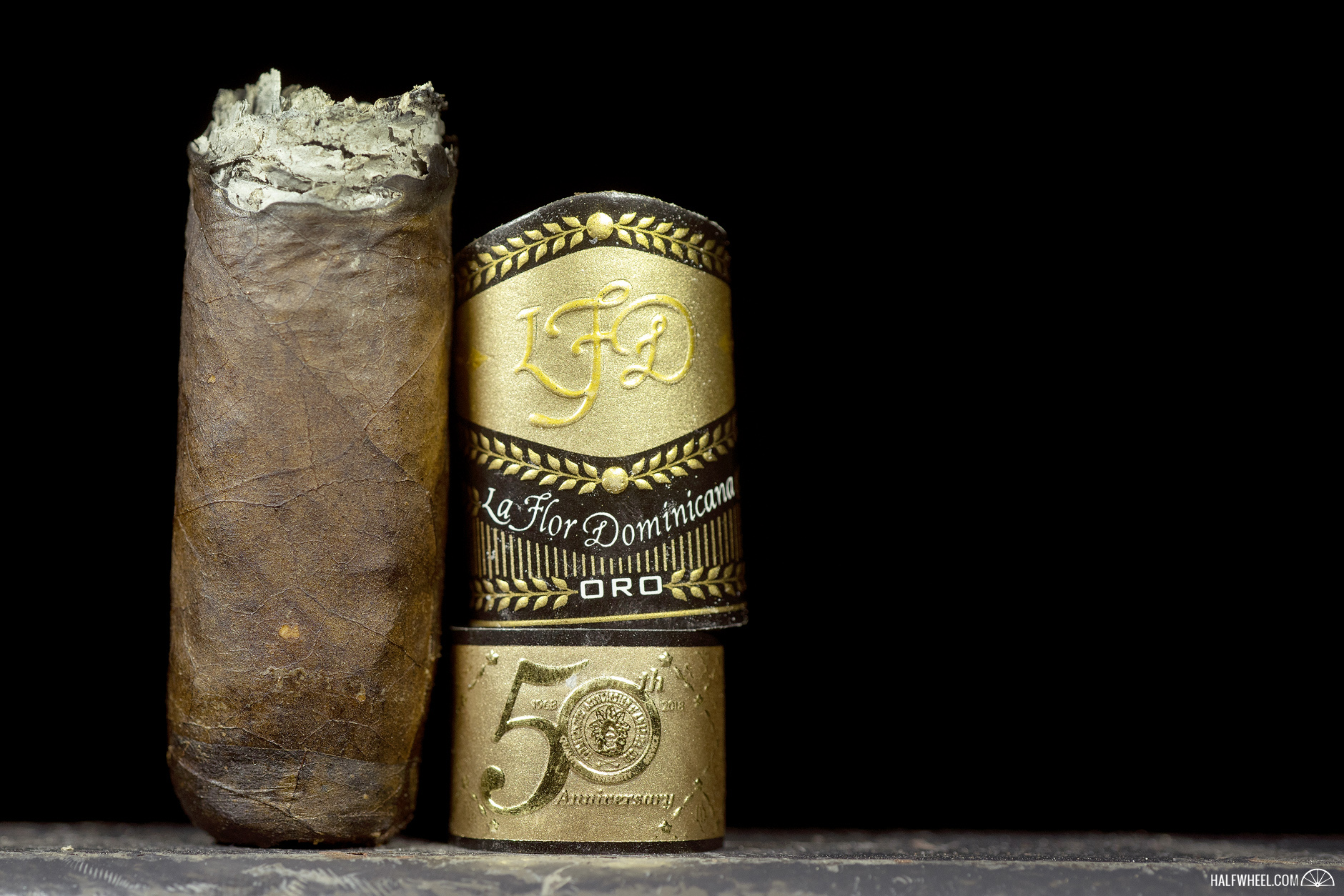 I wish it was stronger, I wish it was sweeter, I think I just wish the cigar tasted a bit different. There's nothing wrong with the cigar, or at least nothing that particularly stands out. It tastes fine, it burns well and I didn't have any issue smoking for it three hours, but I don't know when I'd like to do it again. Yes, the profile is a bit dry. Yes, it's a bit sharp, particularly in the first third. But, I don't think either one of those things is where my issue lies. At times, the La Flor Dominicana TAA 50 Segunda Edición Maduro delivers a ton of complexity with enough balance, but a lot of times I found myself just wanting a bit more: either more complexity and balance, or a bit of the unhinged power from something like an Air Bender or a Double Ligero. The biggest issue is the price, it's not a great cigar for $20 and it certainly isn't a great La Flor for $20.