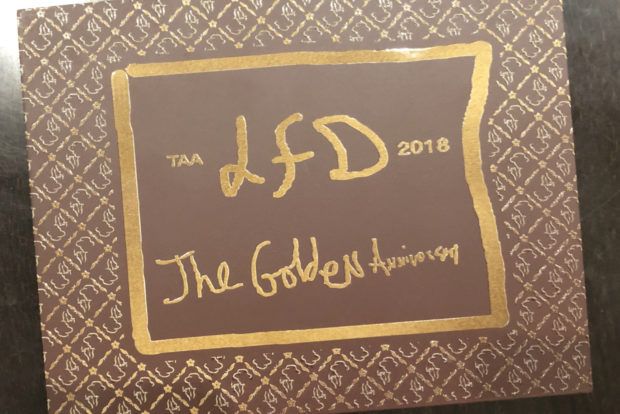 La Flor Dominicana’s exclusive cigar for members of the Tobacconists’ Association of America (TAA) has begun shipping to stores.

The La Flor Dominicana TAA 2018 Golden “Oro” Anniversary is a 6 1/2 x 54 box-pressed figurado. As for the name, the Golden—and the Spanish word for gold, oro—are references to the 50th anniversary of the TAA as an organization.

Blend-wise it uses a Nicaraguan sun grown wrapper over a Dominican binder and Dominican fillers. In the filler is a Dominican criollo 99 leaf that the company has been growing at its La Canela farm for a years, but has never been used before in an LFD.

One of the more notable features is the box design. La Flor Dominicana owner Litto Gomez asked his son Tony to come up with a box design. In turn, the younger Gomez created a sketch using the WhatsApp app and sent it to Litto. That sketch was then placed onto the mock-up boxes that were shown to TAA retailers in late April.

It turns out, the retailers liked the rudimentary design, so the company added a few more design elements to the production boxes, notably, a silhouette of Gomez smoking a cigar.

Pricing is set at $24 per cigar or $480 per box of 20. The company only made one run of the cigars based on the orders it took from TAA retailers, though it’s not disclosing how many boxes it made.

Many manufacturers, including La Flor Dominicana, have created exclusive cigars for TAA members over the last handful of years.