Editor’s Note: In March, we published a review of a cigar we believed was the 2017 La Flor Dominicana Factory Press. It, in fact, was a different version released for FDA purposes. This is a review of the actual cigar, an editor’s note regarding our original review can be found here.

If there has ever been a cigar whose physical appearance matches its name, Factory Press is it. The shape is extremely distinctive and is characterized by an extreme box-press on the top of the cigar that is a result of the way they are left packaged in trays until a customer purchases one. In fact, every incarnation of the Factory Press Series has been sold in the actual trays they were originally packaged in, with 12 cigars in each tray and 10 trays in a master case, meaning a total of 120 cigars for each box.

For years I have been fascinated with our cigar box-pressing system. Many times I have thought how great it would be to share the process with our fans. That is why I’m offering a very special cigar shipped in the actual factory press.

At 6 1/2 x 50, the newest incarnation of the Factory Press line is very close in size to the original Factory Press I and the Factory Press IV, both of which came in a 6 1/2 x 60. However, the blend is entirely different, consisting of an Ecuadorian habano wrapper covering an Ecuadorian Sumatran binder and filler tobaccos from the Dominican Republic. This release is limited to just 300 boxes of 120—or 36,000 total cigars—with each individual cigar retailing for $15.10.

There have now been seven different releases in the Factory Press series: If you had given me this cigar without telling me it was a Factory Press, I would not have believed you, as it looks more like a soft-box press than any previous releases in the series. The wrapper is a medium reddish-brown color with plenty of veins and rough patches, along with a lack of any noticeable oil. Aroma from the wrapper is a combination of barnyard, hay, espresso beans, black pepper and cocoa nibs, while the cold draw brings flavors of earth, creamy cedar, leather, bitter dark chocolate and a touch of floral.

The first third of the Factory Press starts off with a wonderful combination of creamy cedar and peanuts, while notes of freshly roasted coffee beans, earth, hay, dark chocolate and yeast bring up the rear. There is a significant amount of both black pepper and spice noticeable, while a candied pecan sweetness is easily identifiable on the retrohale. There is a copious amount of smoke from the foot and the draw is fantastic from the first puff, but the burn needs to be corrected almost out of the gate. Strength-wise, the Factory Press makes itself known by the time the first third comes to an end, easily hitting a point close to medium and still rising fast. While the dominant flavors in the second third of the La Flor Dominicana Factory Press remain both fairly consistent and very enjoyable—creamy cedar and nuts—the strength continues to increase, leaving me to wonder just how high it will go before the end of the cigar. I can taste other flavors like cocoa nibs, lemongrass, leather and slight citrus, but the candied pecan note has definitely receded from its high in the first third. The black pepper on the retrohale continues to be a factor, but the spice on my tongue has disappeared almost completely by the halfway point. Thankfully, the burn evens up nicely and gives me no issues whatsoever, while the draw continues to give me just the right amount of resistance. As expected, the overall strength continues to increase, easily hitting a point just under the full mark by the time the second third ends. 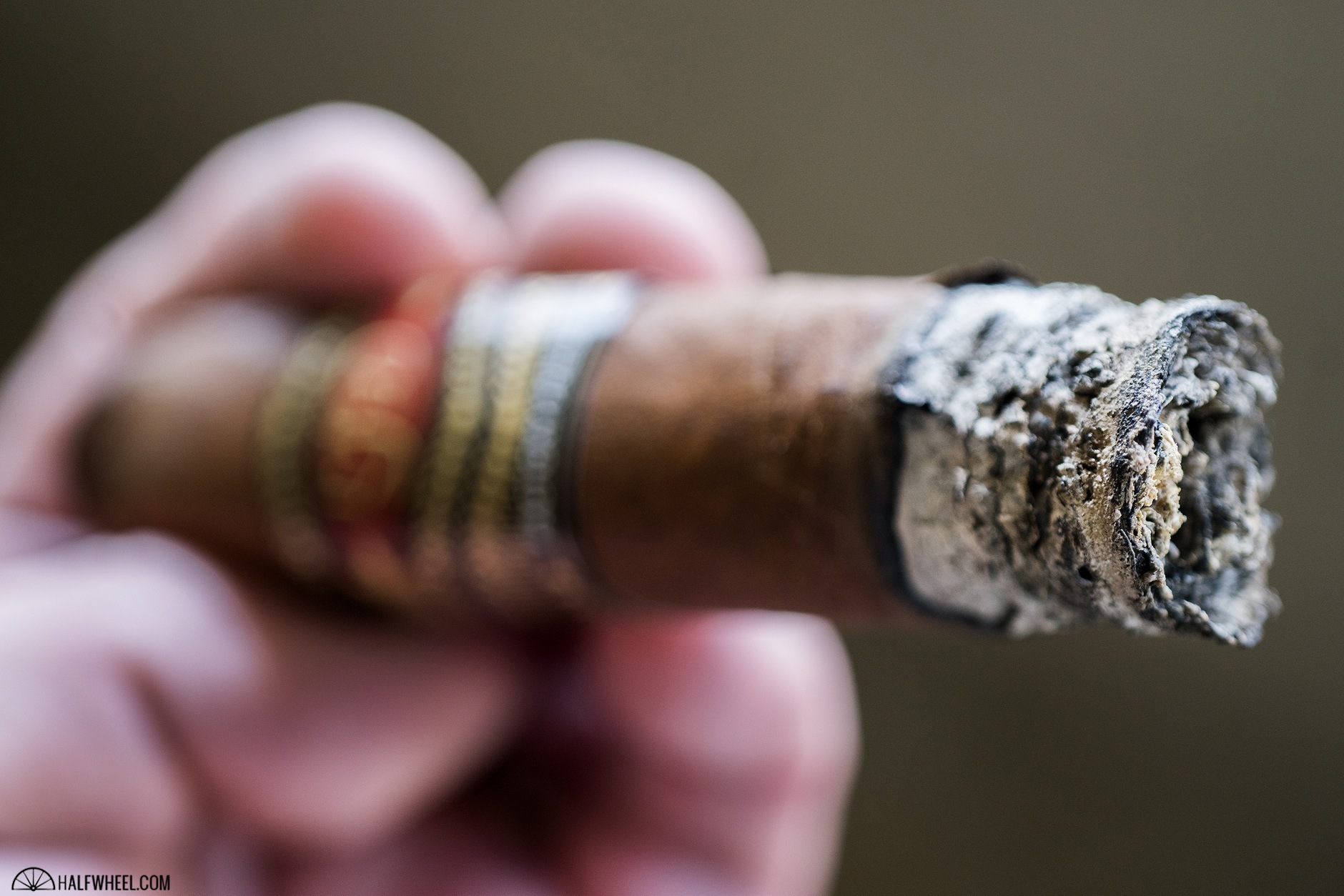 Unfortunately, the final third of the La Flor Dominicana Factory Press 2017 is all about the strength, which hits the full mark early on, then goes even further. There are still flavors that can be identified in the profile—namely cedar, coffee beans, dark chocolate, bread and grass—but any nuance is overwhelmed by the strength, which destroys the balance that was present in the first two thirds. Not helping the situation is the fact that the amount of candied sweetness has seemingly fallen off of a cliff, while the black pepper on the retrohale has increased compared the second third. Construction-wise, the burn and draw continue to be excellent, and the smoke production has picked up both in amount and body. In addition, the strength has increased noticeably and finally manages to hit a solid medium by the time I put the nub down with about an inch to go. I have always been a fan of La Flor Dominicana’s Factory Press Series for the combination of great packaging and what are usually enjoyable blends and indeed, that is exactly the way the Factory Press starts out. The three samples were remarkably consistent, with complex and distinct flavors in the first two thirds—the first third especially stood out, with a combination of creamy cedar and candied pecan sweetness—before the strength ramps up in the final third and overwhelms any nuance or balance that the profile could possibly have. Lovers of full strength blends will be thrilled, but if you are looking for balanced cigar experience, stop smoking the newest Factory Press after the first two thirds.