Instead of me trying to regurgitate and change the wording of a Litto Gomez quote about the Factory Press line, I’ll just let you read it for yourself:

The four releases of the Factory Press are all large cigars, the smallest being 54 RG. Here is a list of all four: 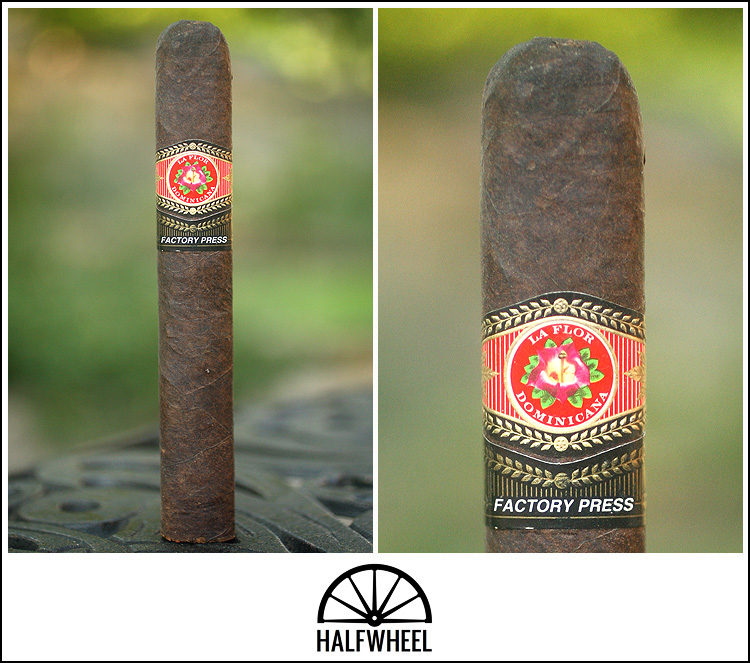 The Factory Press is a very square cigar, much more so than you would be used to seeing in a normal box-pressed cigar shape. This particular cigar has been out of the factory press mold for a little while however and you can see it has sprung back just a little bit from the pictures of other LFD Factory Press cigars which all have very crisp angles. The Connecticut Broadleaf is a dark chocolate color and is fairly rustic looking. There is one noticeable vein that runs up the length of the cigar and while the seam is visible it’s still wrapped well. The cigar itself feels very solid without any soft spots, but that’s to be expected with this pressed cigar. There isn’t much aroma coming off the foot of the cigar, but I do get some minor chocolate and cinnamon notes. On the pre-draw I also get the same minor chocolate note but also with a hint of pepper.

The cigar starts out with sweet chocolate notes and a touch of pepper on the tongue. The draw is actually very nice, not too loose or tight. Having said that however, there isn’t much smoke production and it takes a couple of draws to get anything significant. The large box-press shape is awkward to hold in your mouth, but you get used to it. The Factory Press I continues with the same flavors just like before, not overly complex and in fact kind of mild, but it’s enjoyable. There is an overall earthy profile that has the chocolate and pepper notes at the forefront. Moving on to the second third I’m still getting the same sweet chocolate but there is a nice cedar background starting to develop. The smoke production has increased significantly and I’ve been able to settle into just a single draw at a time. The white-grey ash has a brown tinge to it and holds to about an inch. The burn line of the La Flor has been even without having to do any touch ups which along with the nice draw speaks well of the construction. Towards the end of this third I’m starting to get some interesting background espresso notes. 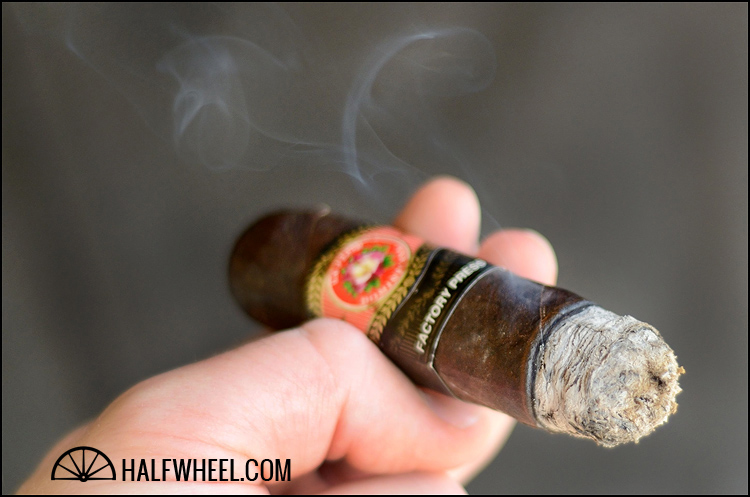 The final third is much like the others. Still getting an overall light chocolate note, hints of espresso, and some minor background cedar notes. The smoke production continued to be impressive. Towards the end the strength of the cigar really jumped out all of a sudden and showed the classic LFD strength. What I was going along thinking of as a medium to medium-strong cigar ended pretty strong. Finishing up the cigar I was still enjoying the same profile without it getting hot or bitter and drowning those flavors out. 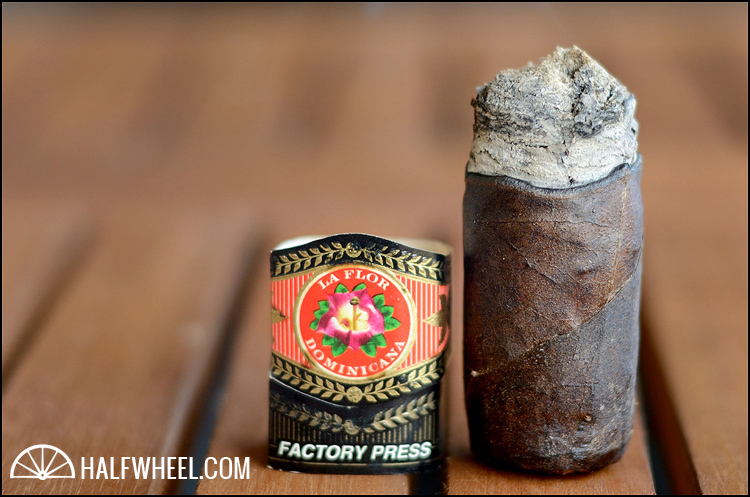 Of all the strong, ass-kicking cigars on the market, La Flor Dominicana is one that I enjoy more than others. Their Lanceros are fantastic, the Mysterio cigars are works of art, and even their Double Ligeros (while strong as hell) still have fantastic flavors. The Factory Press was no exception but I think the seven years since it was released has taken its toll. The cigar has mellowed out, the flavors only develop a little bit throughout, and overall the signature strength of the cigar is dormant until the final third. Some might find this appealing but others won’t. Honestly I would’ve preferred it to be a little stronger if that meant the cigar was a little more complex. If you still have any of these laying around I suggest you smoke them soon. If you don’t, seek out the Factory Press IV and avoid paying a premium on the secondary market for the first release.