Say the words Joya de Nicaragua, and the words strong cigars should almost immediately come to mind. For many years, they were the strong cigar on your retail tobacconist’s shelves.

No cigar epitomized that better than the Antaño, arguably the company’s flagship and best known line released some 15 or so years ago that beckons with dark wrapper leaves, plenty of pepper and strength, as well as some interesting vitolas.

But one thing that not everyone seemed to appreciate is that Joya de Nicaragua’s Antaño line also packed some pretty solid aging potential, and with a bit of time the cigar would evolve into a much more refined smoke that while still peppery and powerful, delivered much more complexity and nuance than might have been found when the cigar was smoked right off the shelf.

Building on that idea of aged Antaños, this summer Joya de Nicaragua released the Antaño Gran Reserva, which added fillers that have been aged for up to five years, which is said to give the smoker a more refined and mature version of the Antaño 1970, according to Juan Ignacio Martinez, executive president of Joya de Nicaragua. 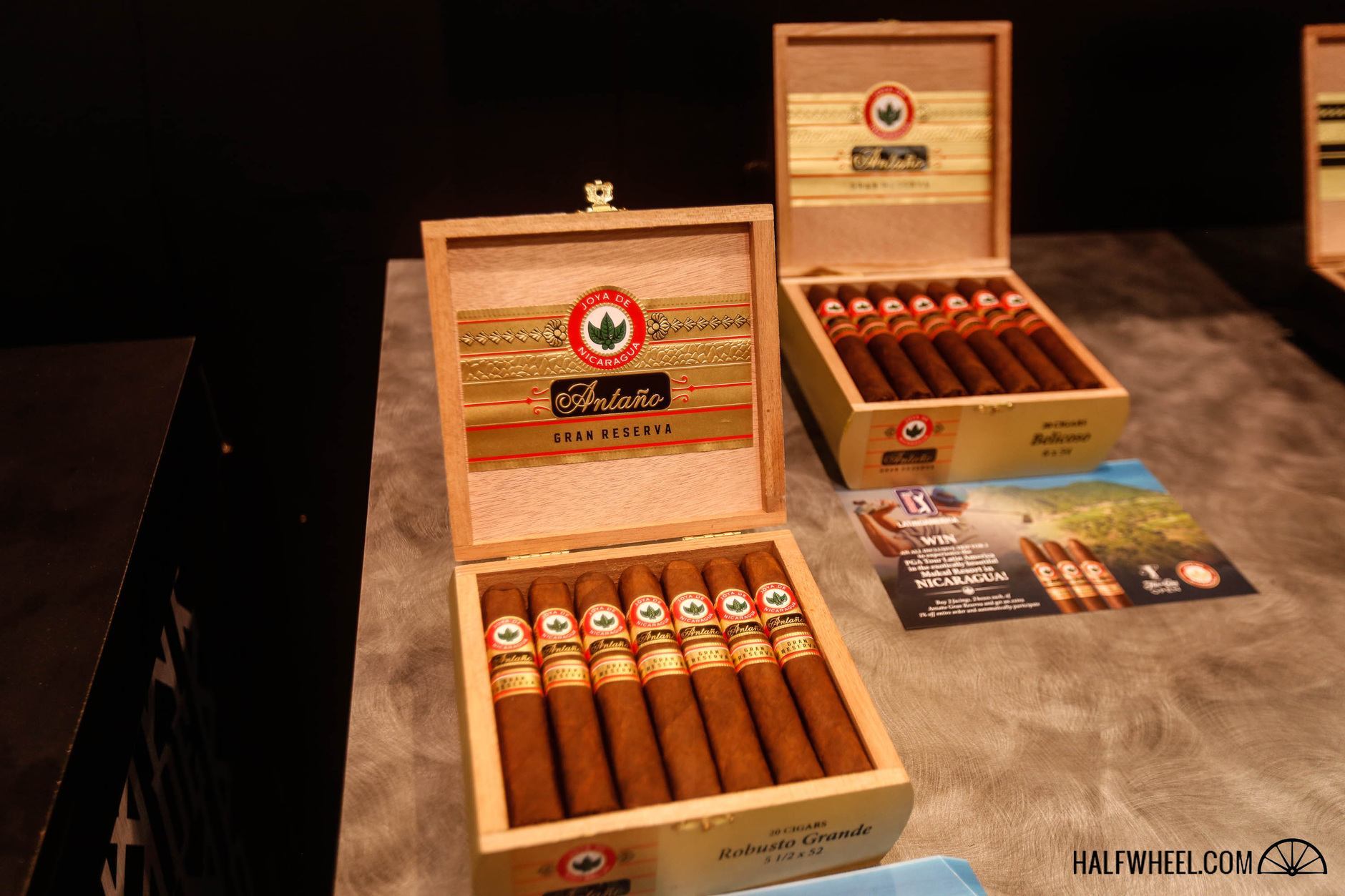 While the Joya de Nicaragua Antaño 1970 line is offered in 10 sizes, there are just three sizes for the Gran Reserva version, all of which are also found in the original Antaño line. 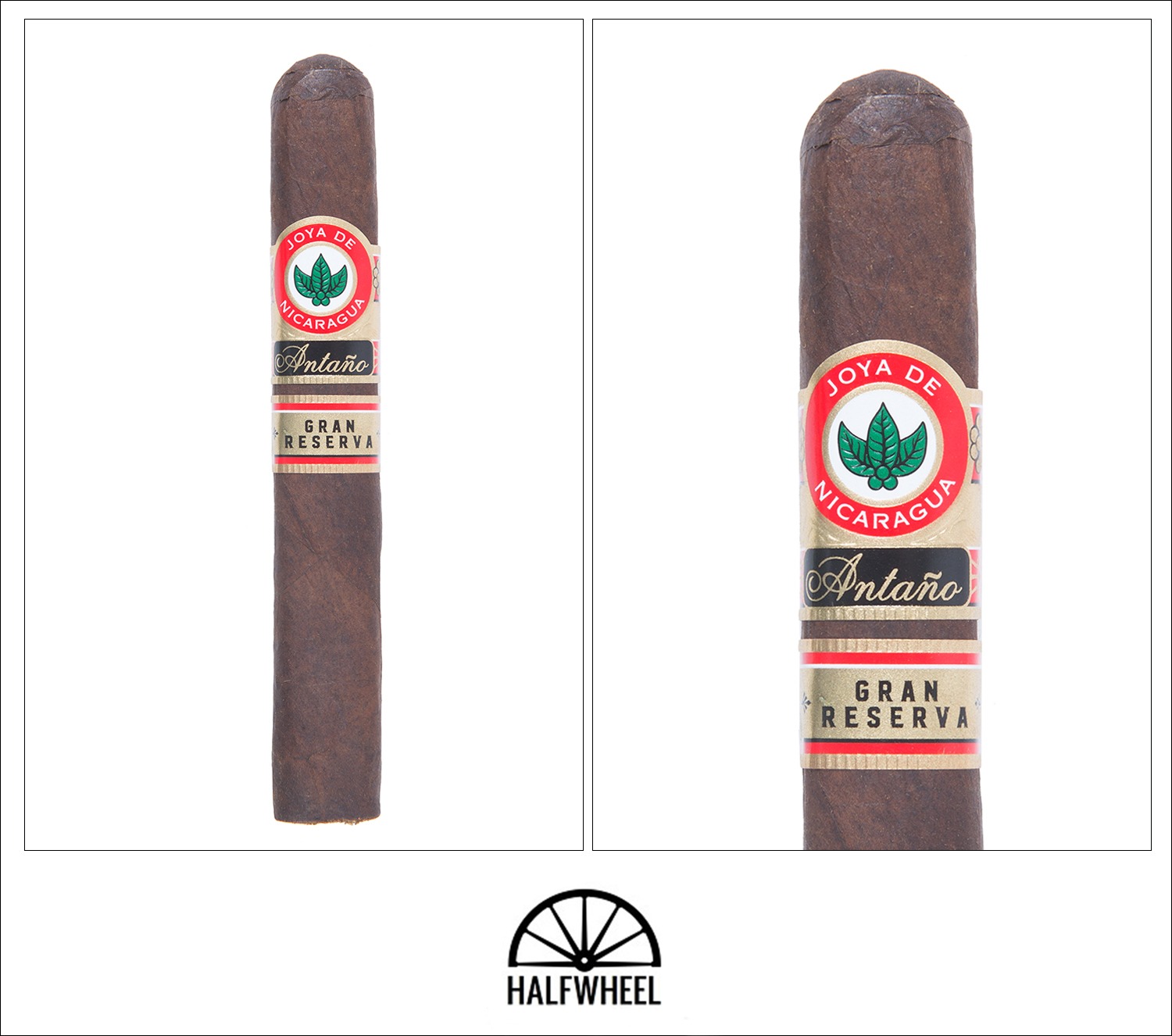 The matte wrapper is a dark chocolate shade of brown with few veins, no tooth, and a smooth texture on the fingertips. The cap on the first sample I smoked seemed to be a bit of an afterthought, as while the rest of the roll was good, the cap had some creases and very visible seams. It’s a firm cigar—firmer than I expect from a box press—though some samples show the pillowy kind of give that a box press usually offers. The foot is subtle but pleasantly sweet, offering chocolate covered cherries and raisins as the first thing I pick up, with juicy meatiness and a bit of pepper behind that. Air movement on the cold draw is a bit snug but not worrisome, with flavors of bark and brownies standing out in a much softer and slightly sweet profile that almost completely lacks pepper.

Fitting for seemingly any Joya de Nicaragua release, the Antaño Gran Reserva starts out with some senses-awakening pepper, though it backs off rather quickly to more sane levels and by the time the burn line is about half an inch along most of the pepper has left, revealing a softer smoke with notes of cake donut, a bit of earth, and just a faint touch of vegetal sweetness. Pepper never really leaves the equation as long as you retrohale, though it pepper comes back with a bit more definition after a brief lull. It’s aggression or relative tameness varies a bit from sample to sample; though when it is on the tamer side it prevents eschewing the softer undertones that the cigar occasionally allows to shine. Having smoked a number of Joya de Nicaragua products over my years, I shouldn’t be surprised that this cigar burns relatively slowly, but it still catches me a bit off guard as it burns beautifully even with plenty of smoke being produced. Say the word antaño to a cigar smoker and thoughts of a full-bodied, peppery cigar should immediately come to mind, yet it’s almost the exact opposite of what this Gran Reserva offers to start the second third. It’s almost delicate for a few puffs, touching on a bit of creaminess as the pepper is nowhere to be found and having me jot down the word elegant. A bit more sweetness emerges at times, almost a dry chocolate cookie, but enough to warrant mentioning. Right around the midpoint, pepper returns in earnest, still not at the levels found earlier but enough to make the palate take notice, with retrohales picking it up at similar levels. Through the nose, the pepper gets hotter than it does on the palate, and while I don’t like saying that it feels like it burns the inside of my nose, it’s certainly more aggressive there than it is on my tongue. 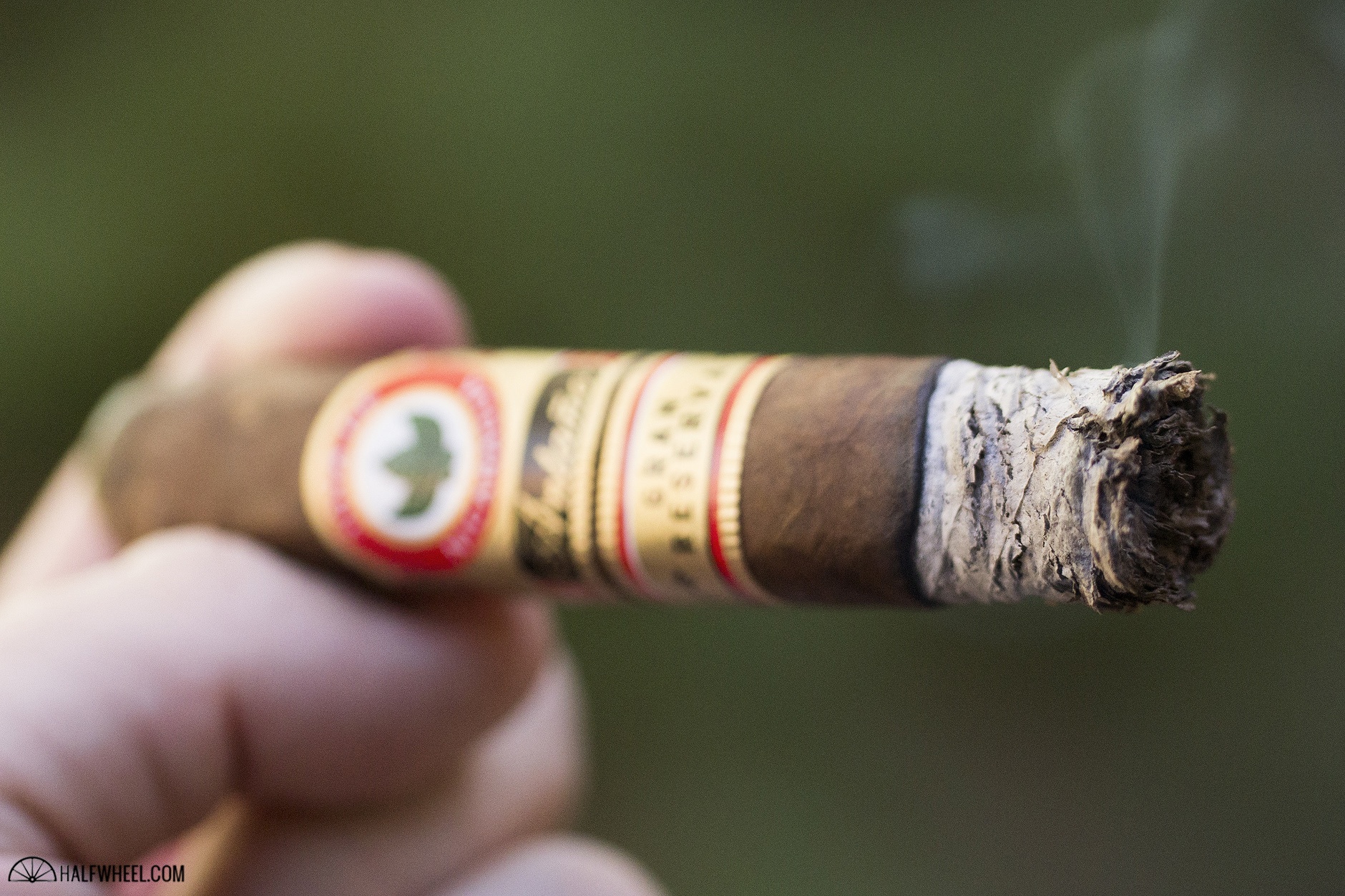 After building back up in strength for the past few puffs, the Joya de Nicaragua Antaño Gran Reserva Robusto Grande levels off at a medium-full level that is fairly pepper forward, backed by notes of black coffee and a bit of earth. Some new sweetness begins to appear, something I haven’t tasted much of to this point, which I find surprising given its natural accompaniment to strong ligero leaves. It’s a simple syrup flavor to start, before picking up some mixed berries and evolving into chocolate with about an inch left to smoke. Seemingly not content to wrap itself up without reminding me of its Antaño heritage, the Gran Reserva kicks up the robustness in the final two inches, making the pepper heavier and more earth-laden, getting a bit rough at times but staying generally quite palate-friendly. The burn continues to be outstanding, and the cigar cooperates by staying fairly cool, with the very last puffs delivering one more hit of sharp pepper. Let's get one thing immediately clear about the Joya de Nicaragua Antaño Gran Reserva Robusto Grande: this is not a cigar that has forgotten its Antaño lineage in favor of being mild and delicate. Even with aged filler, this cigar still packs plenty of punch, yet it also offers some spots where creaminess, sweetness, and some fine complexities show through, something I can't say are terms that come to mind when describing the Antaño 1970 line. I'm quite pleased by this new addition to Joya de Nicaragua's Antaño line and am quite intrigued to see how it changes and hopefully improves with time, a characteristic I am optimistic it shares with its stronger sibling.