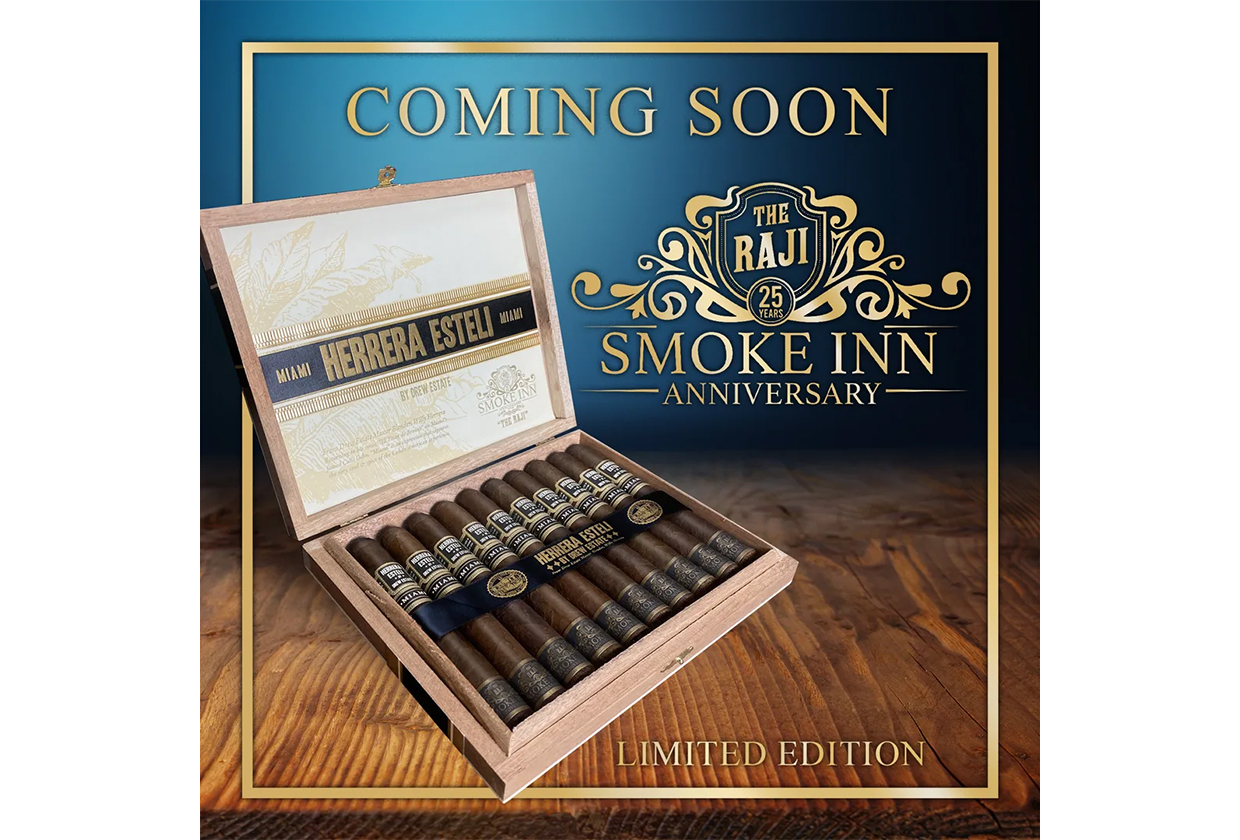 Smoke Inn, the south Florida retailer with multiple locations as well as an online storefront, is celebrating its 25th anniversary with a new cigar from Drew Estate. That cigar is the Herrera Estelí Miami Smoke Inn 25th Anniversary The Raji, a cigar named for Raji Dababneh, the father and mentor of Smoke Inn’s owner, Abe Dababneh.

It is a 6 x 50 toro but does not feature the same blend as the Herrera Estelí Miami line; rather, it uses a Mexican San Andrés wrapper, Nicaraguan binder and fillers from Nicaragua and the Dominican Republic, which Willy Herrera said came from a blend he was working on prior to his time with Drew Estate. “The result is a hearty, meaty, chewy blend,” Herrera said, calling it different from anything else in the Herrera Estelí portfolio.

“When I was growing up in Chicago, I watched my dad work tirelessly at the little grocery store he owned,” said Abe Dababneh via a press release. “He always put in whatever it took to overcome any challenges and keep a roof over our heads and food on our table. He is a true inspiration for me as a businessman, husband and as a father. I learned, and continue to learn, so much from him. Dedicating our 25th anniversary cigar to him is the best way for me to give my heartfelt thanks to him for all that he has done for me.”

The cigar is made at the El Titan de Bronze factory in Miami, Fla, with production limited to 1,500 boxes of 10 cigars, with single cigars having an MSRP of $14. It is scheduled to be released on May 6 during a celebration of the store’s anniversary at the Tru by Hilton Pompano Beach hotel before heading to Smoke Inn’s stores. Smoke Inn will also be offering a “The Raji” ashtray to complement the cigars.

“Abe and I have been close friends from very early on, and he has always been a true ‘stand and deliver’ guy who deserves tremendous success,” said Jonathan Drew, fonder and president of Drew Estate, via a press release. “His father, Raji, clearly has been a great mentor and teacher. It’s an honor to pay tribute to Raji, as well as celebrate Smoke Inn’s 25th anniversary with this majestic Herrera Estelí Miami expression.”

The project was announced over the weekend on the Kiss My Ash Talk Radio show, which is hosted by Abe Dababneh.

Update: Drew Estate issued a press release about the cigar, with quotes from that press release added to the story. Pricing information has also been added.

Update (April 14, 2022) — Smoke Inn has announced that due to venue conflicts, the release party is being moved from Tru by Hilton Pompano Beach to Smoke Inn’s headquarters in Boynton Beach, Fla., and will now be open for all to attend.