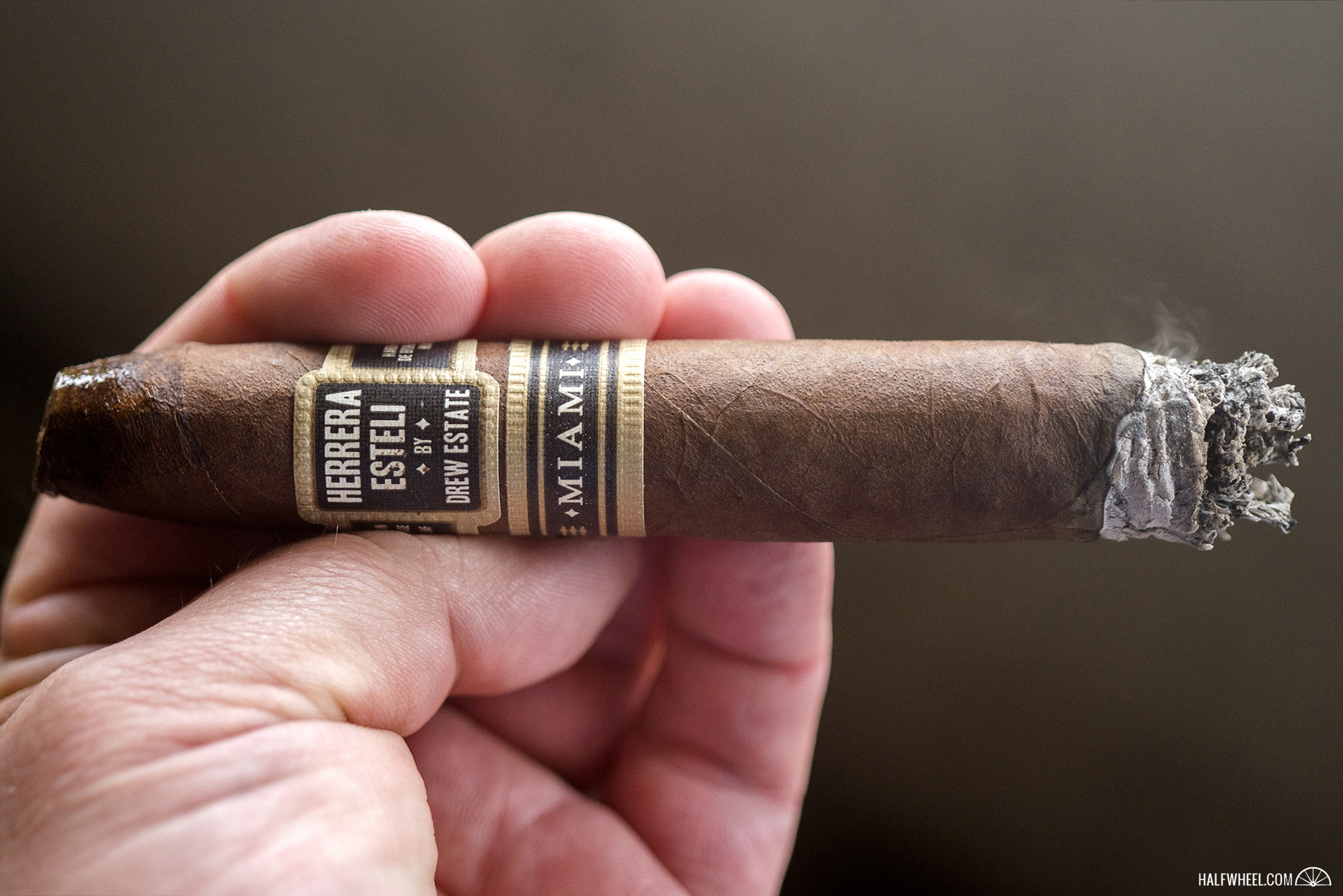 The idea of “going back to your roots” can mean different things to different people, but for Willy Herrera, it refers—at least in part—to a specific factory.

That factory is El Titan de Bronze in Miami, which happens to be owned by Herrera’s mother-in-law, Sandra Cobas. While Herrera is now the master blender at Drew Estate, he actually got his start at the aforementioned factory before being hired on at the cigar company in 2011.

It is also the factory that is producing the subject of today’s review, the somewhat appropriately named Herrera Esteli Miami Piramide Fino. While the line was actually launched back in 2016 as a limited edition in a single 5 3/4 x 48 corona gorda vitola, four more sizes were shown off during the 2018 IPCPR Convention & Trade Show and the brand was soft launched during events in Arizona that took place in November of that year.

“I really like the black and gold color tone of the Herrera Esteli Miami and how it fits into the brand portfolio with multiple vitola expressions in the Miami blend,” said Herrera in a press release. “Working with my family on this brand takes me back to my blending roots and sincerely excites me.”

Although there have been a number of different releases for the line in the past three years, the blend remains the same, namely an Ecuadorian habano oscuro wrapper covering an Ecuadorian Sumatra binder and filler tobaccos sourced from both the Dominican Republic and Nicaragua. Four of the five regular production vitolas are packaged in 10 count boxes; the sole outlier is the Lonsdale Deluxe size, which is sold in boxes of 20.

There are now five different vitolas in the Herrera Esteli Miami lineup: 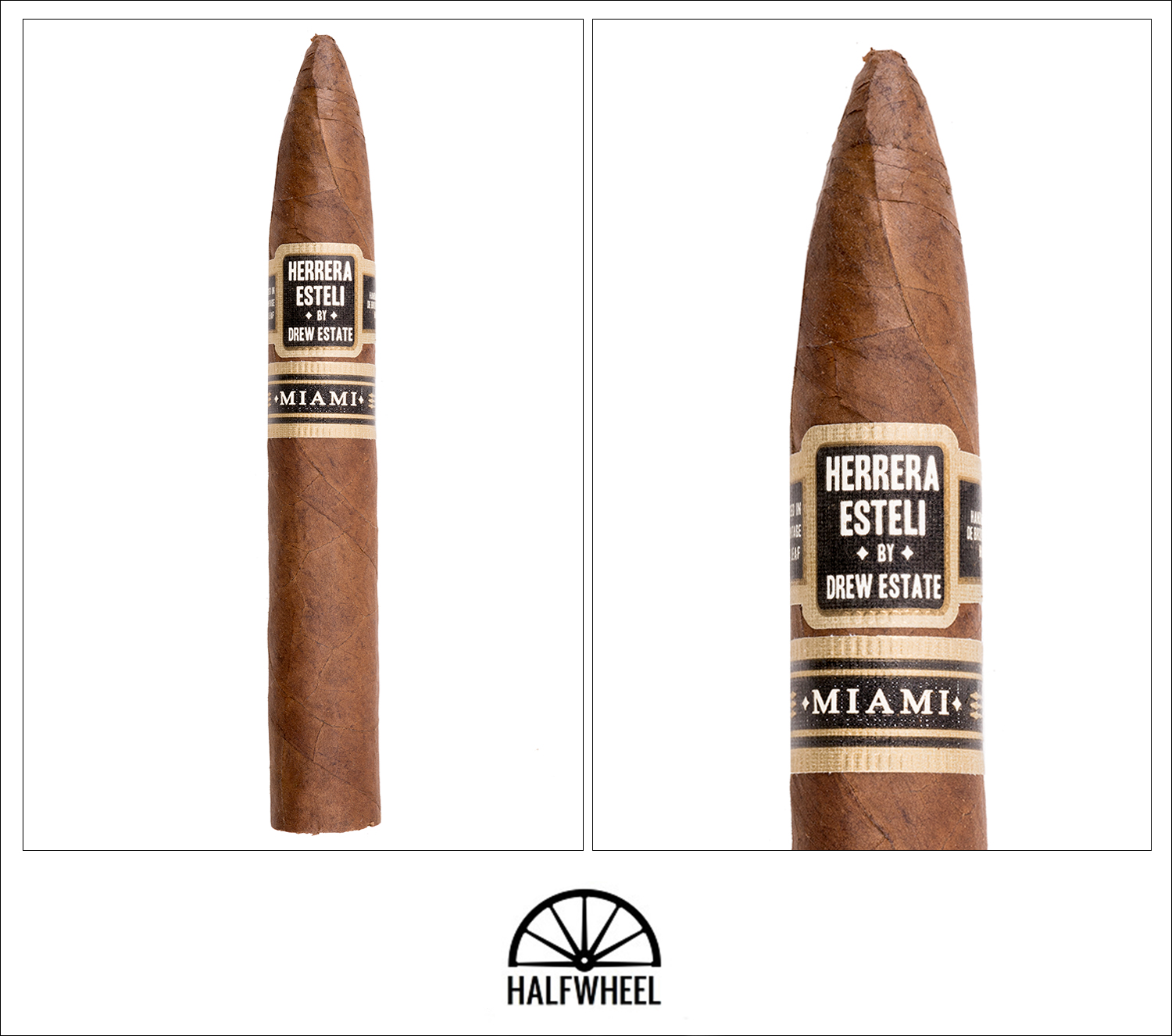 The Herrera Esteli Miami Piramide Fino features a dark and rustic espresso brown wrapper with plenty of tooth to it and enough oil visible that it almost looks like it was dipped in a vat of the stuff before being packaged. While there are a few prominent veins running up and down its length, they just add to the rustic look and the cigar features a very slight box-press. The aroma from the wrapper is a combination of earth, black pepper, leather, barnyard, wood chips, hay and dark chocolate while the cold draw brings flavors of damp hay, cedar chips, floral, tree bark, black pepper and slight raisin sweetness along with a massive amount of spice on my tongue.

Starting out, the Herrera Esteli Miami Piramide Fino features a dominant leather and cedar combination, interspersed with notes of cashews, salted popcorn, nutmeg, creamy hay and earth. There is some raisin sweetness noticeable on the finish, but it is all but drowned out by the amount of both black pepper and spice that is present, both of which seem to be happy stick around for a while.  While the draw is great out of the gate, the burn gives me some issues early on, albeit nothing that is not easily handled by a couple of quick touchups. Smoke production is massive off of the foot and while Piramide Fino starts off fairly mild in the strength department, it ramps up quickly enough to hit a point very close to medium by the time the first third ends.

Although leather and cedar remain the dominant combination during the second third of the Herrera Esteli Miami, the raisin sweetness from the first third increases noticeably, easily becoming a major factor. Other flavors of licorice, generic nuts, hay, bready yeast and bitter espresso beans flit in and out, while both the black pepper on the retrohale and spice on my tongue have receded enough to take a back seat in the profile. Thankfully, the burn has evened up nicely and the draw continues to give me no issues, while the smoke production is still well above average. The overall strength has increased just a bit as well, hitting a solid medium by the end of the second third. 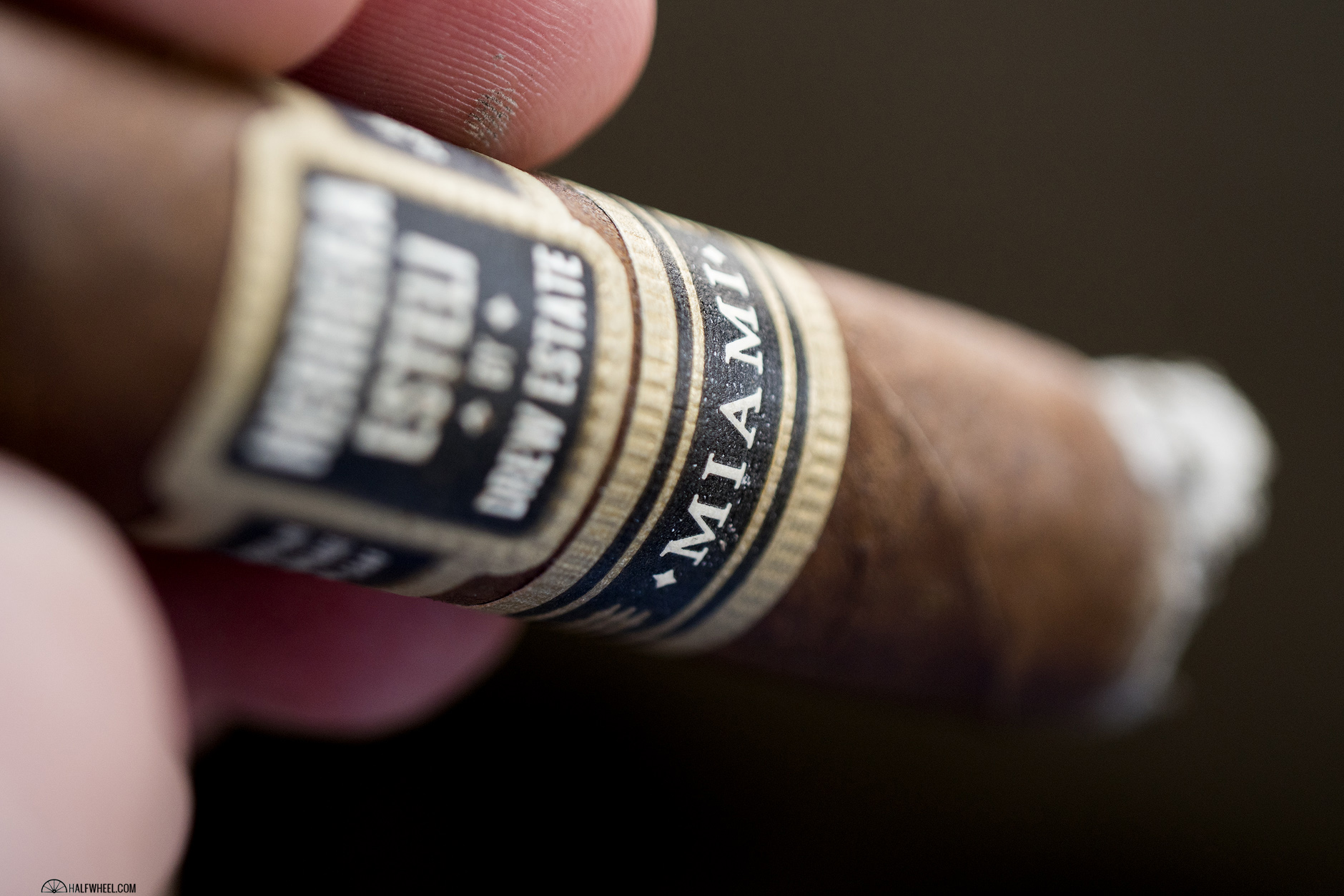 Sadly, the raisin sweetness that hit its high in the preceding third of the Herrera Esteli Miami Piramide Fino seems to quickly erode during the final third, while the profile continues to be dominated by the same leather and cedar combination. Those notes are followed by other flavors of freshly roasted coffee beans, hay, cocoa nibs, peanuts and slight generic citrus. While the spice on my tongue and slight black pepper on the retrohale pulled over from the previous two thirds are still noticeable, both have significantly reduced from their high points and can be considered nothing more than background notes at this point in the smoke. Construction-wise, the draw is as excellent as ever and the burn continues to give me no major issues while the overall strength reaches a point slightly above the medium mark by the time I and done and I put the nub down with about an inch left. 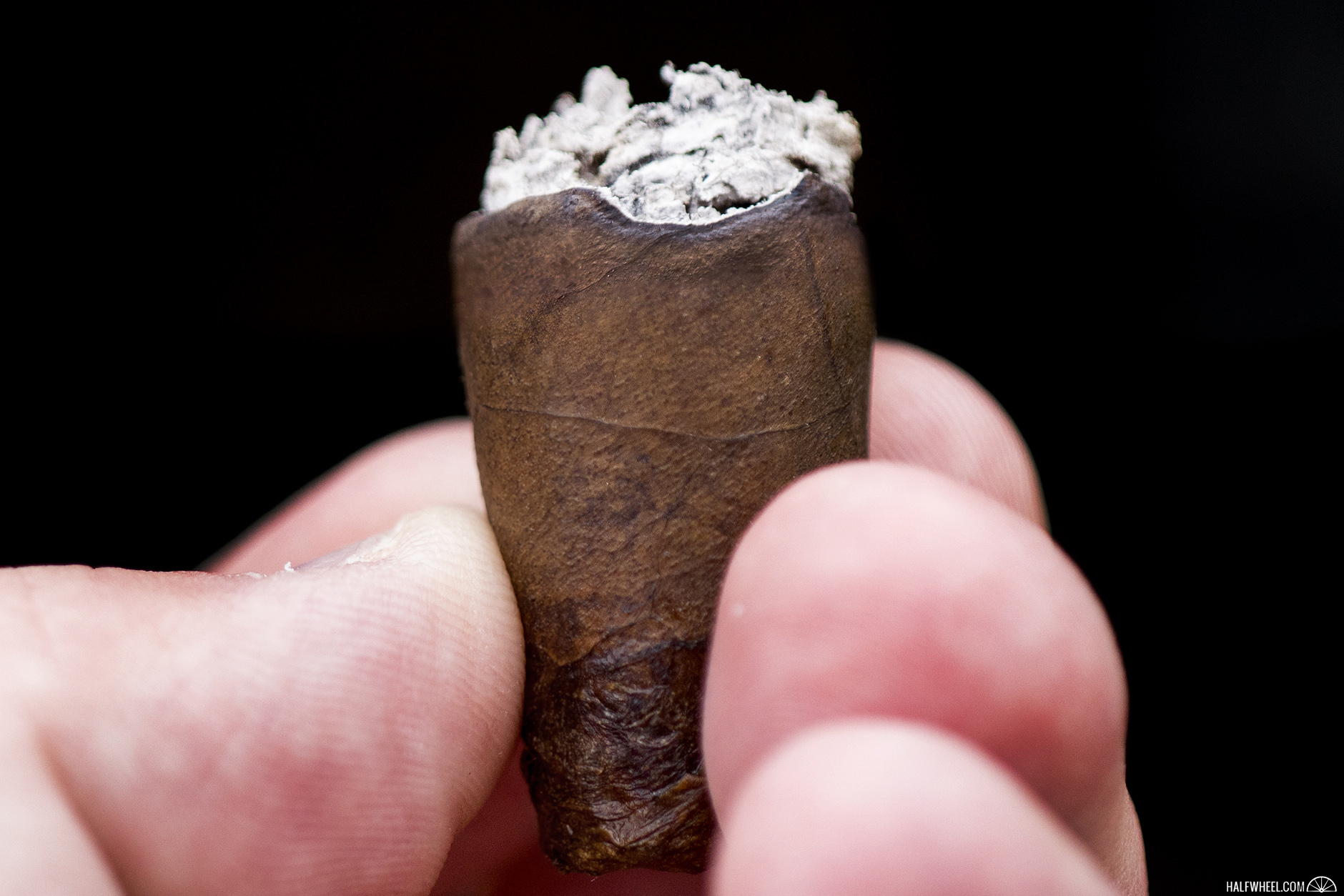 Issues with consistency aside, when I got a good sample of the Herrera Esteli Miami Piramide Fino, it was quite enjoyable, with a dominant leather and cedar combination on the palate along with a rich raisin sweetness on the finish that hit its peak early in the second third. Although I still prefer the sweeter and creamier profile of the original Herrera Esteli blend a bit more, the Herrera Esteli Miami Piramide Fino would be great for those looking for a bit more earth, spice and pepper in their cigar's profile.