For many decades, the H. Upmann Magnum 46 stood all alone as the only Magnum-branded cigars within the Upmann portfolio. That changed a bit over 10 years ago when Habanos S.A. announced the Magnum 50, an Edición Limitada, and then a few years later when the Magnum 48 was released, once again as an Edición Limitada.

At that point, the unofficial Magnum series was born. These cigars feature a secondary band with the name and the number of its corresponding ring gauge.

But since the mid-2000s, a bit has changed. The Magnum 50 became a rare example of Habanos S.A. taking an Edición Limitada and making it a regular production cigar. Around the same time, the Magnum 46 was formally discontinued.

Last year, news came out that Habanos S.A. was looking to add another cigar to the Magnum series, this time a much thicker Magnum 54. It would be released as a regular production cigar measuring 120mm (4 3/4 inches) x 54.

As with the other H. Upmann Magnum cigars, the Magnum 54 is composed of tobacco from Cuba’s Vuelta Abajo in the Pinar de Río region of the country. The new regular production release will be available in two different packaging options: slide-top boxes of 10 or cardboard packs that will include three aluminum tubes. 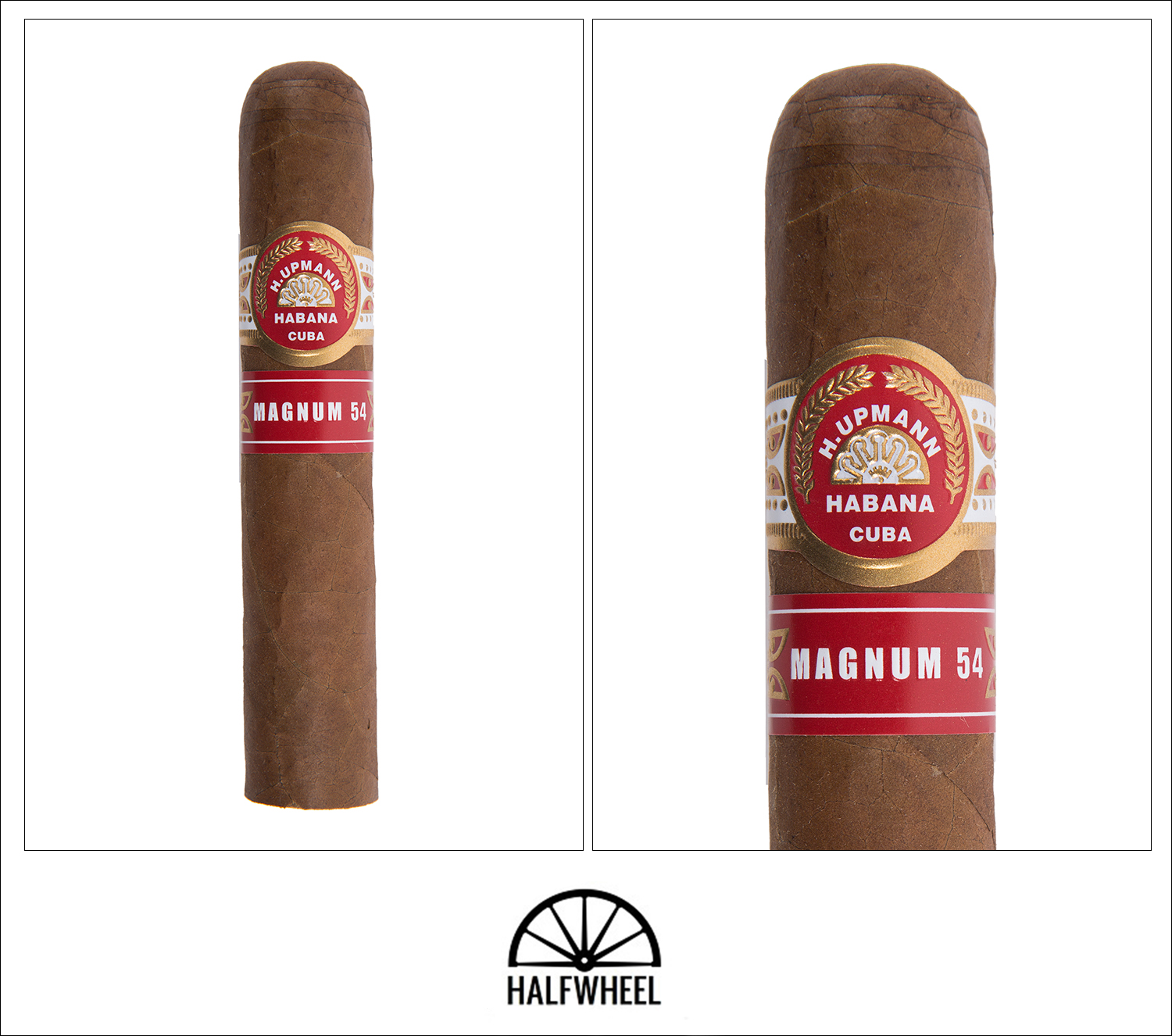 The H. Upmann Magnum 54 is covered in a gorgeous reddish brown wrapper that is parchment-like to the touch. There is almost no oil on the wrapper, but there are plenty of very stark veins visible running up and down the length of the cigar. Aroma from the wrapper is a combination of strong barnyard, manure, grass, dark chocolate and cedar, while the cold draw brings flavors of sweet cedar, cinnamon, barnyard, dank earth, cocoa and hay.

Starting out the first third, the H. Upmann Magnum 54 features a multitude of flavors, including a dominant dark chocolate and hay combination, followed by notes of creamy cedar, cinnamon, anise, leather and a touch of orange citrus. While not overwhelming by any means, there is some noticeable white pepper on the retrohale, and I am tasting some faint sweetness that reminds me of maple syrup on the finish. Even considering the small amount of the cap I took off, the draw is a bit open for my tastes—albeit well within normal limits—but the burn is excellent so far, while the smoke production is massive off of the foot. Strength-wise, the Magnum 54 does not come close to the medium mark by the end of the first third, but it is increasing. 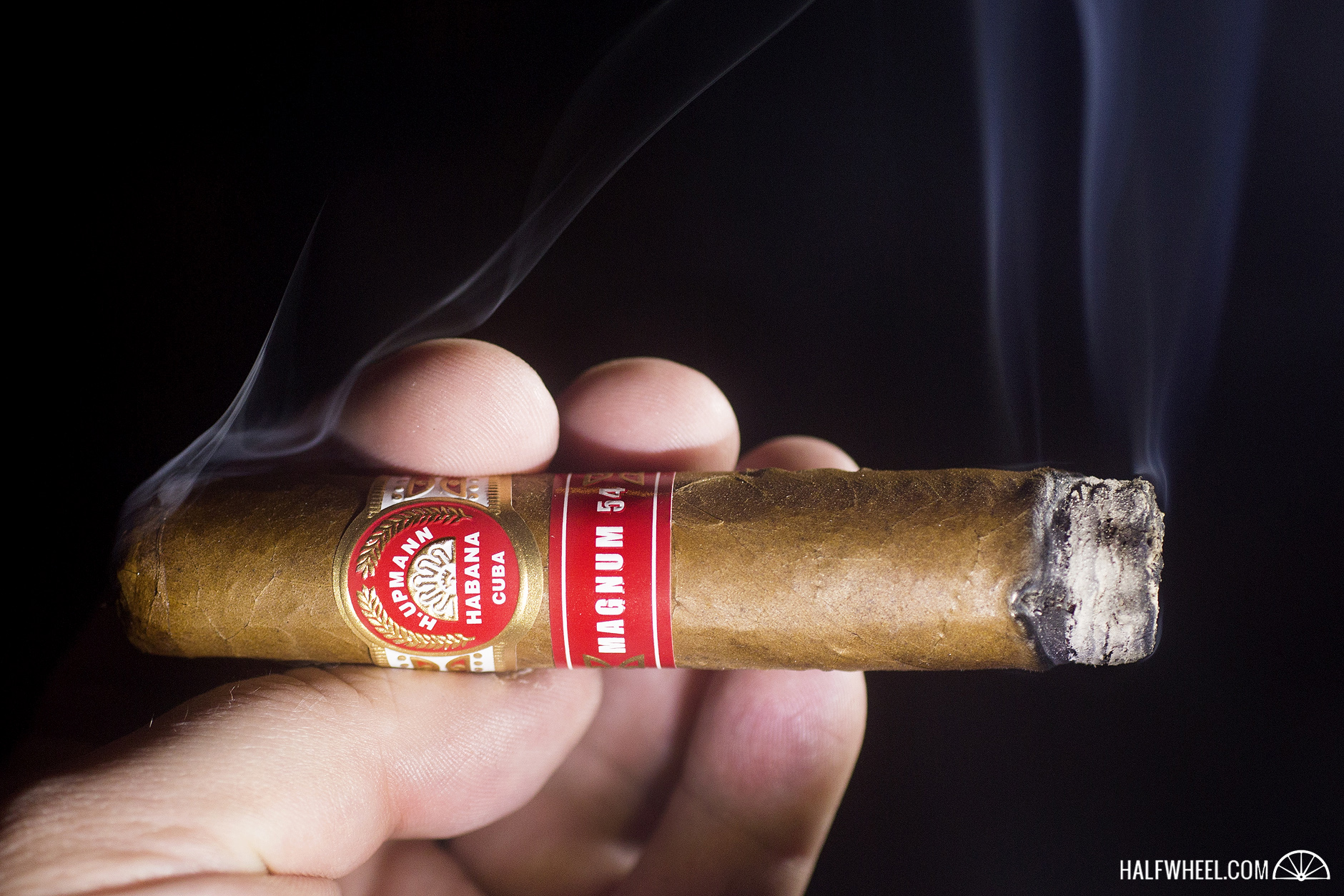 The maple syrup sweetness begins to change in the second third of the H. Upmann Magnum 54, morphing into a great floral sweetness fully by the halfway point. The dominant flavors are still the same dark chocolate and hay combination, but I am also tasting some salt on my lips that really bumps up the overall complexity of the profile. Other flavors of leather, almonds, creamy cedar, gritty earth, barnyard and coffee beans flit in and out, while both the white pepper and orange citrus on the retrohale has increased slightly. The draw has tightened up nicely, and the burn continues to impress, while the smoke production remains high. The overall strength easily hits the medium mark by the halfway point, but seems content to stay there for the duration of the second third. 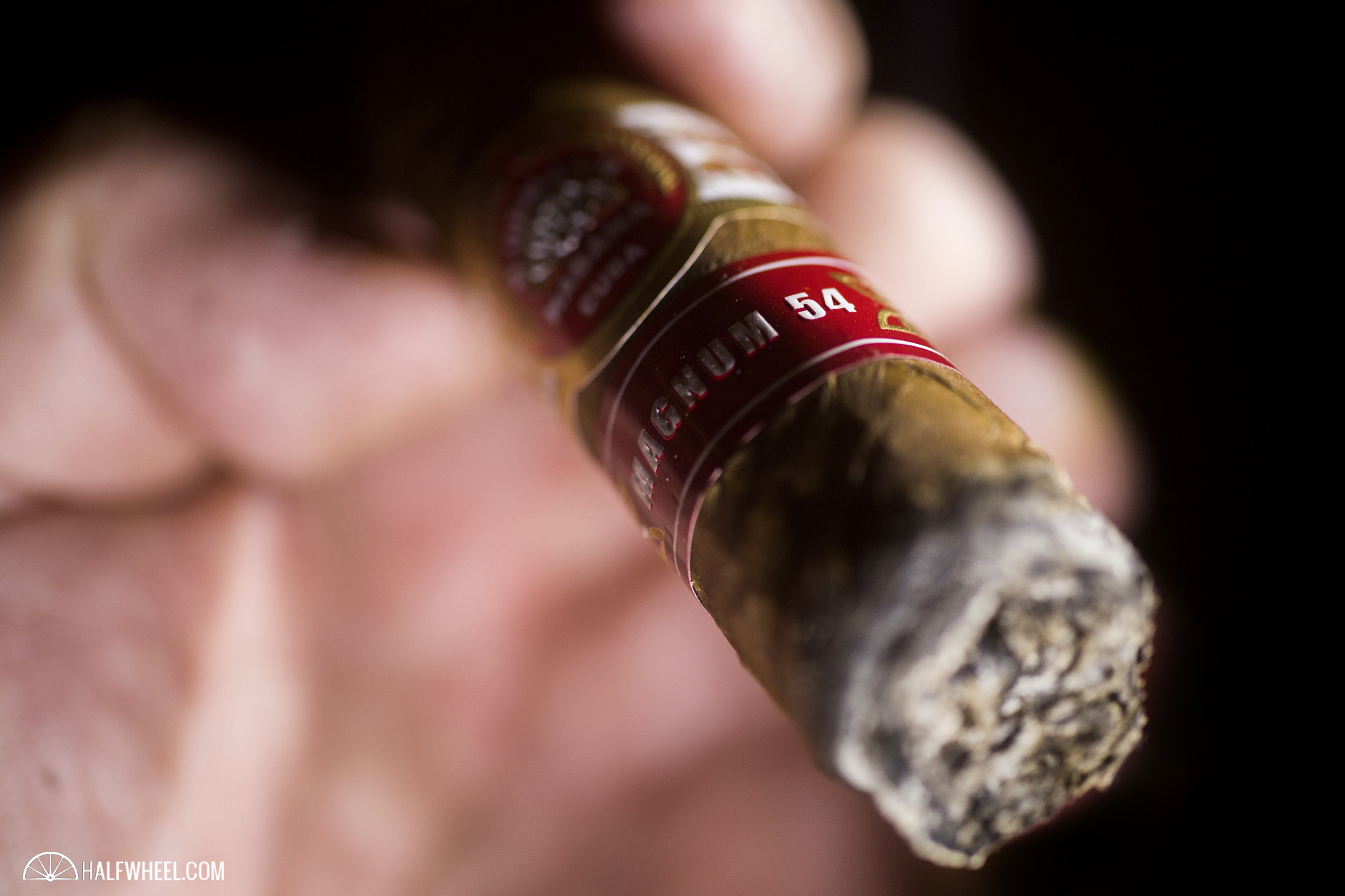 Coming into the final third of the H. Upmann Magnum 54, and while the dark chocolate note remains strong, the hay flavor from the first two thirds has receded, replaced by the creamy cedar note. Other flavors of toast, grass, cinnamon, coffee beans, leather, earth and slight citrus fight for space, and while I notice a very faint soapy note on the finish, it is not strong enough to detract from the profile. The sweetness has morphed again, this time to more of a standard vanilla note and the white pepper on the retohale has remained steady. Both the burn and the draw are fantastic, while the strength does not come close to the full mark, it does end up being slightly above medium by the time I put the nub down with less than an inch to go. 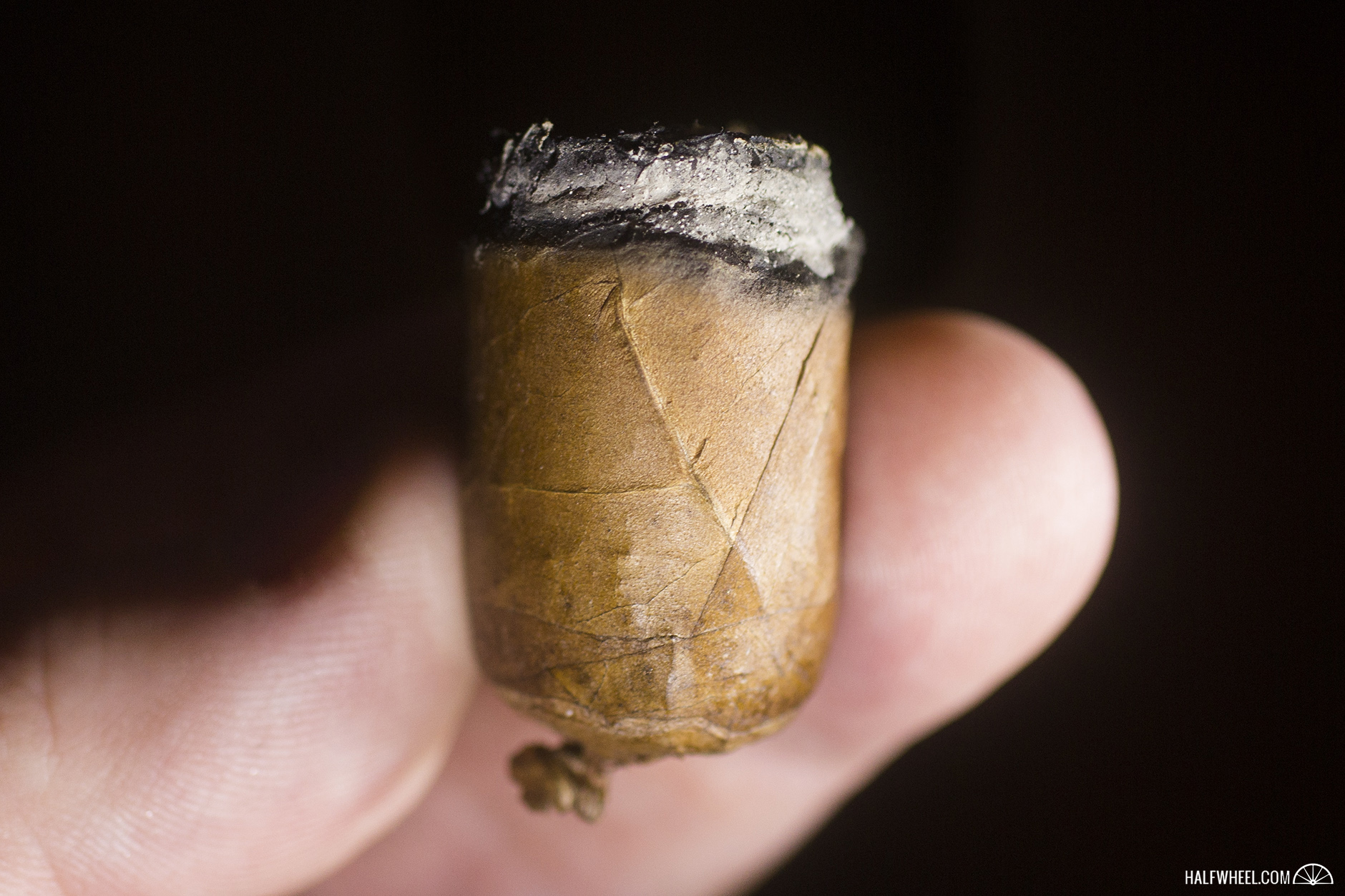 These reviews have been labeled as “preproduction” because there is likely to be a significant gap between when the cigars are reviewed and when they shipped. For reference, the two cigars we reviewed from last year’s Festival del Habano have not shipped as of late March, over one year after the Festival.. — CM.

I have experienced my fair share of issues with Cuban cigars in the past, but I have to admit, the Magnum 54 is a very good cigar. Complex and nuanced, the H. Upmann also features excellent construction as well as a very interesting sweetness that seems to be constantly morphing as the cigar burns down. A very good release from Habanos S.A. and one I am definitely looking forward to buying more of whenever they actually become available.