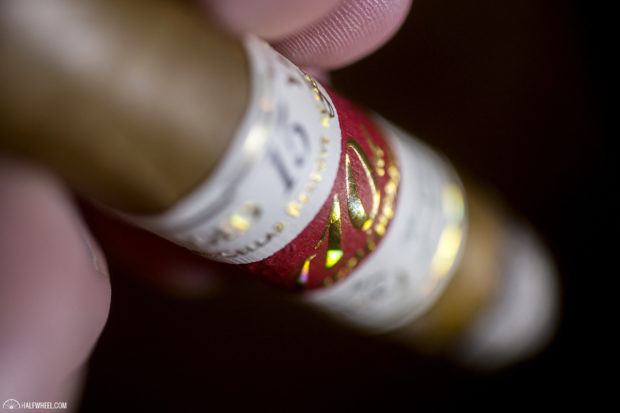 At this year’s IPCPR Convention & Trade Show, Gurkha showed off yet another incarnation in the line, this time specifically released to commemorate the original cigar that debuted 10 years ago. However, unlike that blend, the aptly named Gurkha Cellar Reserve 15 Year 10th Anniversary incorporates an Ecuadorian rosado wrapper covering a Nicaraguan binder and filler tobaccos hailing from the Condega, Estelí and Jalapa regions in Nicaragua. “The special edition 15-year Cellar Reserve cigar was created to commemorate the Cellar Reserve’s 10-year anniversary, Gurkha’s first brick and mortar cigar and its most successful brand,” said Kaizad Hansotia, ceo of Gurkha Cigars, in a press release. “The cigars will be rolled in a special vitola will be rolled in a hand selected, rare wrapper and come in a 50-count humidor box. This medium body, full-flavor and extremely complex smoke will come from an Ecuadorian Rosado wrapper, the Vintage Nicaraguan filler from Condesa, Jalapa and Esteli and a Nicaraguan binder.”

Unlike any of the other versions, the newest cigar is only available in a 6 x 52 toro, and is packaged in humidors of 50 with only 1,000 humidors produced. Each humidor is priced at $700 or $14 per cigar. Covered in a milk chocolate brown wrapper, the Gurkha Cellar Reserve 15 Year 10th Anniversary features a roughness to the wrapper that reminds me of strongly of parchment and there are no soft spots anywhere on the cigar. There is virtually no oil to speak of, but one thing it does have is numerous obvious veins running up and down its length. Aroma from the wrapper is a combination of manure, barnyard, oak, chocolate and coffee, while the cold draw brings distinct flavors of hay, wood, leather, almonds and espresso, along with a touch of sweetness.

Right off the bat, the Gurkha Cellar Reserve 15 Year 10th Anniversary features a dominant combination of both dark chocolate and almond butter, along with lesser flavors of hay, bitter espresso, green tea and toast. The profile is extremely creamy overall and I can taste a very slight sweetness trying to make itself known, but it stays pretty generic during the entire first third. Smoke production is above average and there is a nice amount of black pepper on the retrohale as well as spice on my tongue, although both begin to recede somewhat as the first third comes to an end. Construction-wise, the burn and draw are excellent so far while the strength level ends the first third well below the medium mark. Thankfully, the sweetness from the first third of the Gurkha Cellar Reserve 15 Year 10th Anniversary starts becoming more distinct on the retrohale during the second third, reminding me of molasses. The dominant flavors continue to be a combination of dark chocolate and almonds with oak, hay, tea leaves, coffee beans and leather bringing up the rear. The profile is still quite creamy overall—especially on the finish—and there is an increasing amount of black pepper on the retrohale as well. Both the burn and the draw continue to impress, and the smoke production remains relatively high. Strength-wise, the Gurkha Cellar Reserve 15 Year 10th Anniversary easily hits medium mark by the time the second third draws to an end, and does not seem to be slowing down anytime soon. The final third of the Gurkha Cellar Reserve 15 Year 10th Anniversary includes a number of major changes, most notably the strength, which begins to increase dramatically. The profile is still extremely creamy overall, with dominant notes of oak and leather followed closely by flavors of almonds, cinnamon, fresh ground coffee, tea leaves and a touch of a floral note. The molasses sweetness from the second third is still very present, but the black pepper on the retrohale has diminished slightly, and the spice on my tongue is totally gone. The draw remains excellent, but the burn line has wavered quite a bit close to the end, forcing me to touch up to keep it from getting worse. As mentioned above, the overall strength sees a very large and noticeable increase, easily hitting the full mark by the time I put the nub down with about an inch left. Gurkha often gets a bad rap, and while there have been some duds, the company does makes a number of very good cigars as well for those willing to seek them out. This is the latter. It is creamy, nutty and extremely well-balanced overall, with excellent construction in both the draw and burn. Yes, the dramatic increase in strength during the final third makes things a bit rough at the end of the cigar—which affected the overall balance and brought the score down a bit—but the first two thirds make tracking down this blend an easy choice to recommend trying.