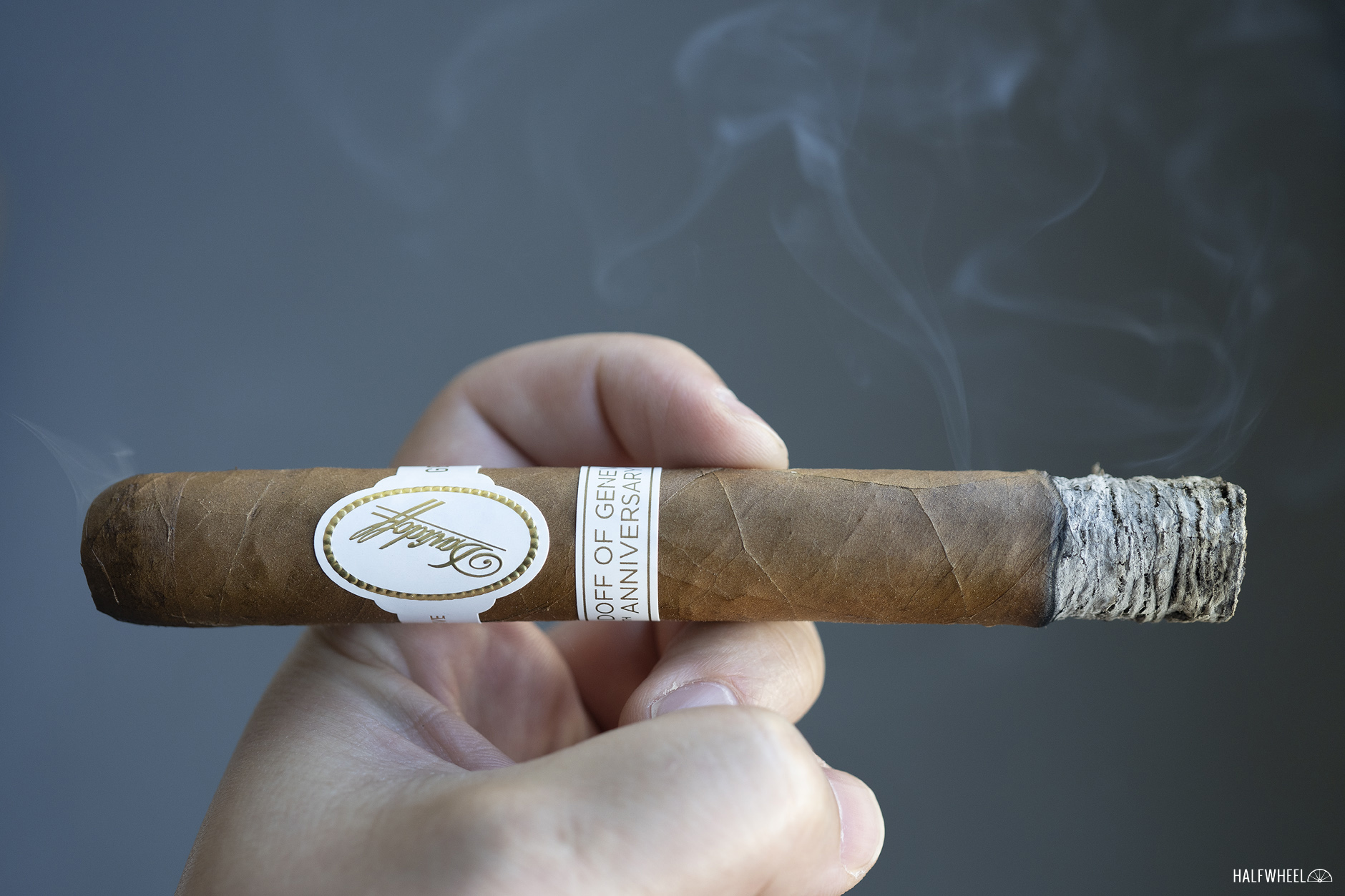 Pretty much every other year it seems I find myself reviewing a Davidoff cigar that is celebrating one of the company’s many anniversaries. It’s to the point that I can simply turn to another review that helps to explain all of the various numbers.

If you do the math, you will realize that the Davidoff 100 Years Geneva came out a decade ago, which means it’s time for another anniversary cigar, this time celebrating the 110th anniversary of the opening of the Geneva-based tobacco store that was founded by Zino Davidoff’s parents. Davidoff—the person—would go on to work for his parents in the 1930s and eventually took over the store and began to add new features to the business, notably creating a line of cigars that would be exclusives to his stores.

Interestingly, those first cigars weren’t named Davidoff; rather, he decided to name them after Château Latour, the famous winery in Bordeaux. In 1968, the Davidoff No. 1, No. 2 and Ambassadrice were released, the first cigars to carry the Davidoff name. Two years later, Zino Davidoff sold his business to Oettinger Imex AG, a Basel-based tobacco business, for around $1 million.

While there have been cigars created to celebrate the anniversaries of specific Davidoff stores, I can’t think of another cigar that celebrates the larger Davidoff business that wasn’t offered to its retail customers. However, the Davidoff of Geneva 110th Anniversary Exclusive 2021 is not being sold at non-Davidoff stores. That’s because it’s not a standalone release, rather, it’s part of Davidoff’s annual Exclusive Series. The concept is pretty simple, Davidoff picks a specific size of cigar—this year it’s a 6 x 50 toro—and allows distributors or retailers to receive a blend of the cigar. The program started as a way for specific retailers to get cigars honoring a store’s major anniversary, but this year’s list also includes cigars that are being offered to different retailers in specific regions. In the past, Davidoff would create five blends and allow retailers to pick which ones they wanted, though there was nothing that would prevent multiple retailers from picking the same blend. When I went to photograph this box of cigars about a month ago, I was somewhat surprised by how light the wrappers were. While Davidoff is largely known for its shade-grown wrappers, most of the company’s limited editions tend to use a much darker wrapper. This looks like a Grand Cru, with a nearly vibrant golden wrapper that nearly every cigar factory would gladly take simply based on its color. It’s quite pretty and has a good bit of oils, though a couple of cigars have some feet that protrude a bit wider than the rest of the cigars. After more than a month out of cellophane, the wrapper has a medium-plus mixture of aromas of sourdough bread, barnyard and some pear-like sweetness. The foot’s aroma is slightly stronger with flavors of lemon, acidity, umami and pine nuts. It’s tough to pinpoint all of the flavors and the end result reminds me more of a seafood pasta dish’s white sauce than anything else. While each cigar feels a bit hard when squeezed, the tightness of the draw is fine. The cold draw is medium-plus and sweeter thanks to sweet oranges, creaminess, floral flavors, nuttiness, a sweet candy pineapple flavor and a touch of bitter brownie batter.

There’s not much smoke hitting my mouth after the Davidoff of Geneva 110th Anniversary Exclusive 2021 is lit. It’s not because the draw is tight, but it happens with each cigar I smoke for this review. I can pick up some flavors from the mild profile—nuttiness, pine nuts, an underlying creaminess and a faint hint of pepper that never really comes—but my senses are more enthralled with the aroma from the smoke itself, which smells like a classic cigar with some added woodiness and sweetness. It only takes a few puffs for the profile to come alive and it’s pretty apparent that much like the cigar’s appearance, this is a classic Davidoff. There’s a balanced mixture of nuttiness, earthiness and creaminess leading the other flavors which include fruitiness and a building sharpness that seems most closely attached to an acidity. The classic Davidoff theme comes more alive in the finish thanks to a flavor that I most associate with olor tobaccos. Some describe it like a mushroom, other people will say it’s “musty.” Whatever the case, there’s a lot of it on the finish. While the olor immediately grabs my attention, the biggest flavor is the sharp acidity, which gets a lot more intense during the finish. In addition, there’s minerals and a harshness that combine to remind me of some soda waters. Retrohales have more of the olor flavor, though mixed with a Worcestershire sauce-like flavor that creates a darker sensation. There’s also some nuttiness and leather. The normal olor flavor returns on the finish, joined by a muted caramel flavor and a white wine sensation that reminds me of Zinfandel. While I find the retrohale’s finish to be enjoyable, the first few seconds of the retrohale itself are overwhelming enough to dissuade me from doing it regularly. Flavor is full, body is medium-full and strength is mild-medium. Construction is excellent across the board.

Right around the halfway mark, I’m able to notice a distinct change in the profile. While the olor and sharp acidic flavors are still there, a meatiness helps to fill in the gaps and calm things down a lot. Unfortunately, I’m not able to pick up much beyond the olor, meatiness, acidity and creaminess. At times, there are some mild cedar flavors, but the four big flavors are not only quite intense, but they also seem to hit various parts of my palate enough to make it difficult for other things to shine through. Retrohales are more aggressive thanks to an uptick in both sharpness and nuttiness. While the acidity remains, it doesn’t have the citrus-like touches that I found in the early parts of the cigar. There wasn’t much pepper up until this point, but I start to notice the back of my throat covered in white pepper. Retrohales have burnt popcorn, a brighter version of that mushroom flavor, toastiness and lots of meatiness. The retrohale’s finish immediately reminds me of liquid smoke followed by some kiwi sweetness, olor and mineral flavors. Similar to the first third, it’s probably my favorite part of the profile; it’s certainly the most interesting, though unlike the first third, the retrohale itself is a lot more palatable. Flavor is full, body is medium-full and strength is medium-plus. Construction remains excellent. Much of the final third of the Davidoff of Geneva 110th Anniversary Exclusive 2021 tastes like the second third. At around an inch-and-a-half left, things change quite a bit, I suspect due to the increased temperature as the cigar transforms into a nub. There’s less of a number of characteristics—sharpness, sweetness, acidity and overall flavor intensity—which creates a bit of a mixed bag. There’s nuttiness over olor, mustard greens, a semisweet caramel flavor and some espresso. With a reduced amount of acidity, the mineral flavors can shine more even if they don’t increase much in intensity. Eventually both the liquid smoke and meatiness disappear, which leaves the nuttiness and the mineral flavors pretty much by themselves. Retrohales have creaminess, a fruity coffee flavor, the mushroom-like olor flavor and some toastiness. The finish is drier with burnt popcorn, espresso, caramel and a developing saltiness in the middle of my tongue. Flavor is medium-full, body is medium and strength is medium-plus. One sample needs a touch-up right as the final third begins, but the others get to the end of the cigar without any issue. 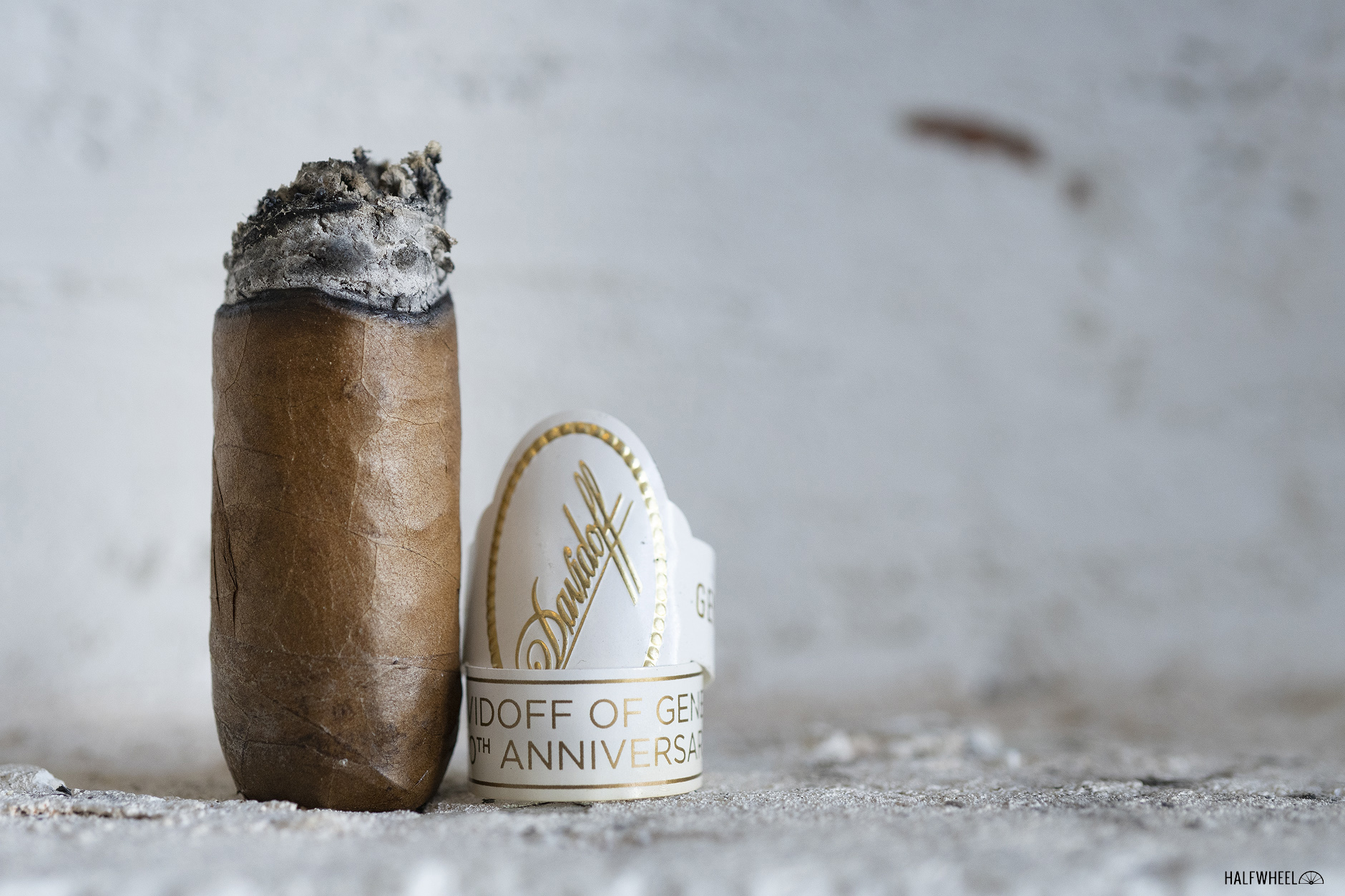 If you are not a fan of the funky mushroom flavor, something that I most associate with certain olor tobaccos, this cigar is simply a non-starter. While that flavor—sometimes described as “musty” elsewhere on the internet—isn’t my favorite, I can deal with some of it. This was more than I’d like, but it was a worthy trade-off for me given what took place in the second half of the cigar. While I thought the sharpness overwhelmed the first third, the second half of the cigar showed just what Davidoff can be at its best, a combination of complexity, big flavors and a body that ties everything together. It’s a combination that isn’t found in most of the cigars I smoke. But for many, if not most, the signature Davidoff funkiness is going to be too much.