Confusingly, there was yet another (totally separate) Davidoff 100 Years Geneva released at the IPCPR show, this time to honor Zino Davidoff’s parents arrival to Switzerland in 1911, where they opened up a tobacco shop a year later. 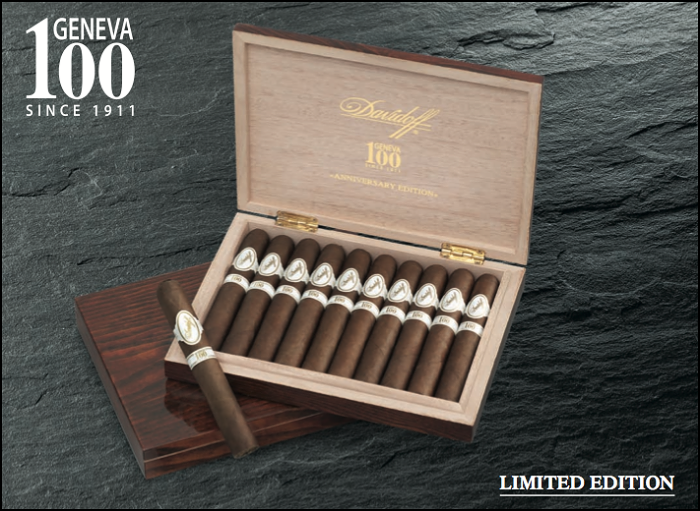 The 100th Anniversary cigar is a blend that consists exclusively of tobaccos that Davidoff obtained through cross-breeding or by further developing its own seeds that were either grown in the Dominican Republic or by a partner in Ecuador (in close cooperation with Davidoff). Five different types were used for the filler and stored between five to nine years so that they could develop their full aroma and special characteristics. The cigar itself is an almost perfect specimen, with a cinnamon brown wrapper that is smooth to the touch, and has a bit of oil on it. There is a pigtail on the cap of the cigar (something you don’t see much on a Davidoff, in fact, I don’t think I have ever seen one on a Davidoff before), and there is a second band (in gold on white) that reads, “Geneva 100 Since 1911”. The wrapper has a faint sweetish woody scent to it.

Right off the bat in the first third, there is a very strong musky note (as in most of Kelner’s cigars), along with some cedar and leather, and just a touch of pepper No spice present, not even on the retrohale. There is also a very distinct saltiness on the lips while smoking. The second third has quite a bit less of that musky note (thankfully), although it is still there.The profile shifts to more of a creamy, sweetish notes, with just a hint of a tart citrus (lemon?) that fades in and out. The strength also increased a bit, enough to notice it.

The final third actually breaks out, and adds a nice dark chocolate note, along with some (long overdue) spice on the retrohale. Pretty good ending, considering the start. Honestly, if it was not for the first third, this cigar would have scored quite a bit higher. While the first third was almost overwhelmingly musky, the last two thirds were quite a bit better in terms of flavor. Whether you like (or love) this cigar will depend heavily on if you like that Kelner musk that most Davidoffs have (albeit in various quantities) since it is so strong in the beginning. The problem, as almost always when talking about Davidoffs, is price. Is this cigar (and its profile) worth the $22 asking price for a nice, mild morning smoke? That is something each individual person has to answer, but for me, there really was not enough of a difference between the Davidoff 100 Years Geneva Robusto and other Davidoffs for me to purchase more.