In November 2018, General Cigar Co. shipped the first incarnation of the Cohiba Spectre, a 7 1/4 x 54 Churchill extra that included a number of unique factors to justify its $90 price tag, which happened to be the company’s most expensive release up to that point.

First, the cigar was made up of a blend of vintage tobaccos, including an Ecuadorian Sumatra wrapper that General said was picked from upper primings of the plant and before being aged in eight sherry barrels that were sourced from Spain. The filler blend also included one of the most interesting aspects of the blend, specifically a Dominican piloto cubano leaf that had been aging in tercios—which is a method of aging tobacco by using the leaves of a royal palm tree—since it was harvested in 1995. In addition, the filler includes a number of leaves grown in Estelí, Nicaragua from 2011-2014 that were also aged in the aforementioned sherry barrels as well as three different leaves from Honduras: Olancho San Agustin (2002), the Jamastran Valley and La Entrada (2011).

Another unique aspect about the Spectre is the fact that General decided to have only one buncher and one roller produce each cigar. The former is Ruben Dario Perez Peña while the latter is Xirolma Céspedes. According to the company, the pair has a combined nearly 50 years of experience rolling cigars. 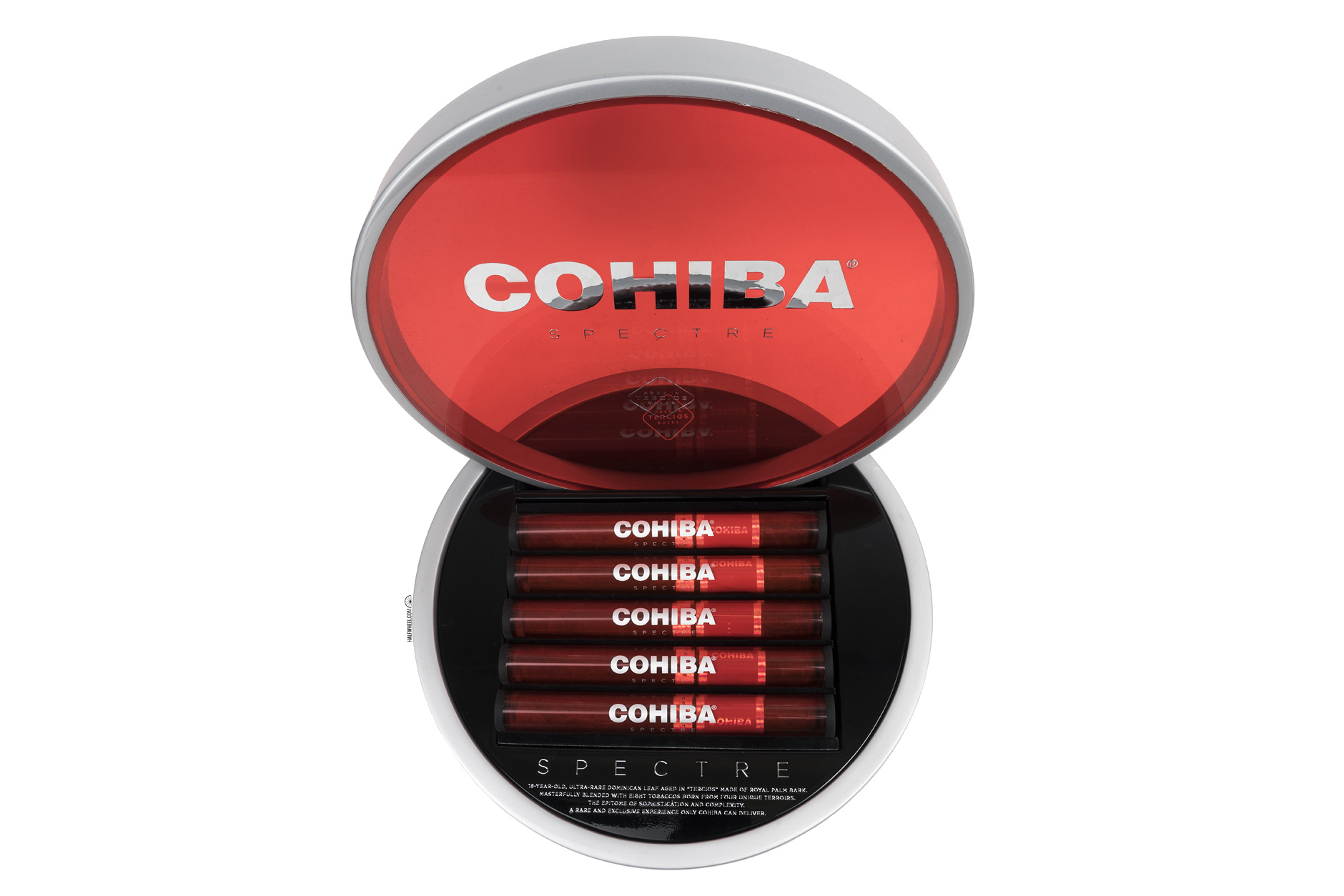 Finally, the Cohiba Spectre was sold in extremely unique packaging designed by the Nsolo Consulting Group that included not only each cigar in its own clear red plastic tube, but also a large round plastic container to hold them that was topped by a clear red plexiglass lid. Although the Spectre was originally limited to just 180 boxes of 10, the cigars quickly sold out when it was shown off at the 2018 IPCPR Convention & Trade Show, so General decided to produce an unspecified additional number.

Here is what I wrote in my original review back in December 2018:

To answer the question on most people’s minds right off the top: as I mentioned in my review of the Muestra de Saka Unicorn, there are very few cigars that I would pay $90-$100 for, and the Cohiba Spectre is not on the list. Yes, the packaging is strikingly unique and yes, the profile of the cigar itself is extremely enjoyable, especially the salted peanut note that dominates the final two thirds. In fact, this blend has quite a few things going for it: it is exceedingly smooth, extremely well-balanced and nicely constructed. However, the one thing this blend does not have is an abundance of complexity, as the profile is fairly linear for pretty much the whole cigar. That is not necessary a bad thing—there are a number of linear blends that I enjoy quite a bit—but I  I was surprised there were not more unique flavors considering the extensive description on the tobacco used in the blend detailed above. In the end, the Cohiba Spectre is a very enjoyable release with an extremely unique packaging, but all of those are not enough to justify the high price that is being charged. As was the case with the first samples, the combination of a fairly rough reddish cinnamon brown wrapper, multiple overt veins, large size and reflective silver used on the bands make the Cohiba Spectre a dominating sight when held in my hand. The aroma from the wrapper and foot is a combination of barnyard, leather, earth, cedar, coffee beans and slight black pepper, while the cold draw brings flavors of hay, aged cedar, leather tack, cocoa nibs, sourdough bread and a touch of floral sweetness.

Starting off, the Spectre features a very distinct coffee flavor as the dominant note on the palate—albeit more of a roasted bean flavor as opposed to the mocha coffee note I noticed the first time around—interspersed with secondary flavors of earth, creamy leather, cedar, sourdough bread, hay and a touch of cinnamon. The sourdough bread note from the cold draw is very evident on the retrohale along with a bit of black pepper, but neither are strong enough to make much of an impact overall. There is also a small amount of intermittent sweetness that comes and goes on the finish, but it remains a minor note for the entirety of the first half. Interestingly, the profile has become a bit more nuanced by the halfway point, with both the sourdough bread and black pepper on the finish replaced by a distinct creamy cashew and cocoa nib combination that goes a long way towards helping out the overall complexity. Secondary flavors in the profile include cinnamon, earth, hay, citrus and leather, along with a dark fruity sweetness that continues to get a bit stronger as the final third burns down.

Construction-wise, the Cohiba performs almost flawlessly, with an amazing draw after a v-cut and burn that—while never razor sharp—never comes close to needing attention from my lighter after the initial toasting during its one hour and 55 minute smoke time. In addition, the smoke production is both copious and dense, while the overall strength hits a point just over the medium mark in the final third and never threatens to go further.

A cigar like the Cohiba Spectre fascinates me for multiple reasons, but one of the most interesting questions I had about the blend—and one of the main reasons I chose it as my redux review this week— is a simple one. Despite the uniqueness of some of the tobaccos that make up the blend, I was not as impressed with the lack of complexity or nuance the cigar exhibited the first time around, so would the close to two years of age help in that regard? The answer is both yes and no. While the first half of the Spectre seemed to follow along the same sort of path as the first samples, the profile of the second half more than made up for it, with a wonderful creamy cashew and cocoa nib combination as well some nice dark fruit sweetness on the rethrohale. Although I can’t help but lament the fact that the entire cigar did not taste the same as the second half, I feel confident in my choice to continue aging a few more samples in the hopes that more time will change that fact.