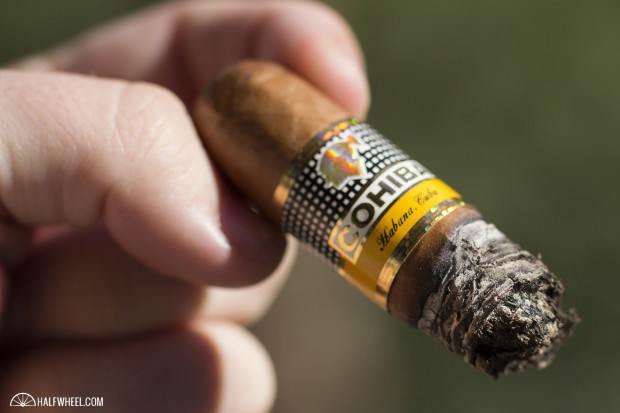 As you may have heard, 2016 marks the 50th anniversary of Habanos S.A.’s most prolific brand, Cohiba, and the Cuban cigar enterprise has pulled out all the punches as part of the celebration.

Originally created in 1963 as a fuma made for Fidel Castro, the blend eventually became known as Cohiba in 1966 and was a private brand that was only available to Castro and high level government officials and Communist Party members for personal use and diplomatic gifts. The cigar didn’t become commercially available until 1984, when the Laguito No.1, Laguito No.2 and Laguito No.3 were released.

The Cohiba marca is adding three new releases for its 50th anniversary: the ultra high-end Cohiba 50 Aniversario, a 7 x 60 vitola limited to just 50 humidors of 50 cigars, with each Elie Bleu-made humidor featuring ligero leaves that have been plated with 24-carat gold. Next is the Cohiba Majestuosos 1966, a 5 9/10 x 58 vitola that also comes in a humidor presentation, with 1,966 units produced and each holding 20 cigars.

For those with a more modest budget for cigars or without access to these limited editions is the Cohiba Medio Siglo, a compact new vitola in the Cohiba Linea 1492 series. Measuring 4 x 52 and with a name that means half century, this petit robusto is a tribute to two of the most popular vitolas in the line: the Cohiba Siglo I and Cohiba Siglo VI. It borrows the length of the former—4 inches (102mm)—and the ring gauge of the latter—52—to create what Habanos S.A. calls a “clipped and modern format” that they budget at taking 30 minutes to smoke while delivering a mild strength profile.

It’s the first new vitola in the Linea 1492 series since 2002, when the Cohiba Siglo VI was added. The line was developed in 1992 and became commercially available in early 1994, when the Siglo I, Siglo II, Siglo III, Siglo IV and Siglo V were all released. It’s considered to be a medium strength range of cigars, utilizing only tobacco from the Vuelta Abajo region of Pínar del Río in western Cuba. The seco and ligero fillers receive a third fermentation, a process said to be exclusive to Cohiba, and one that would befit what is referred to as the company’s global flagship brand. 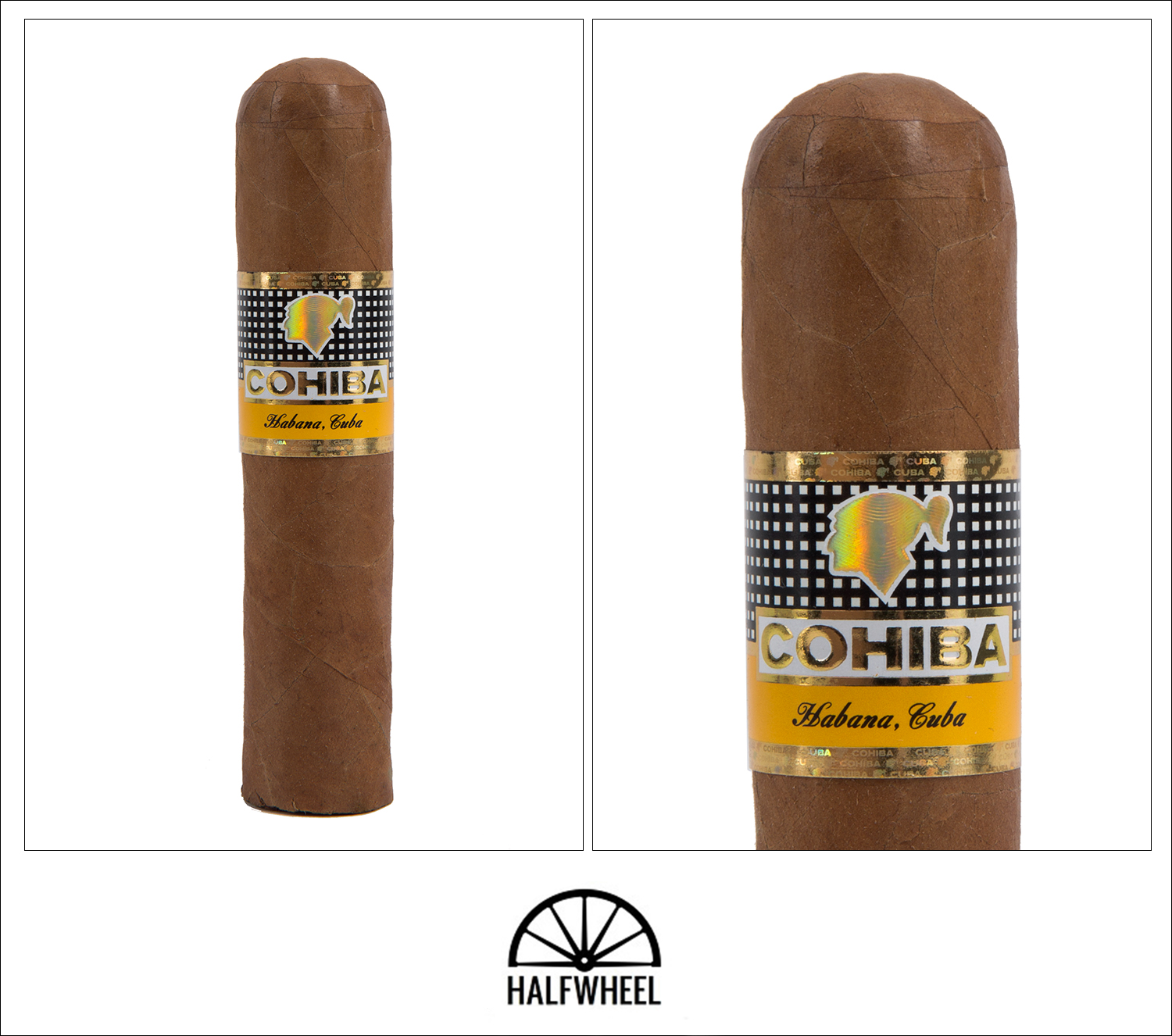 The Cohiba Media Siglo is a short and stout cigar, seeming more at home in American humidors than Cuban ones, and while the band is certainly decorative, the wrapper shows the tell tale sign of Cuban tobacco with a few green spots that detract from an otherwise attractive golden-hued capa. It’s a very well-rolled cigar with seamless lines and just a few small veins, finished off by a near perfectly executed head and cap. There’s a bit of give to one cigar while the other is much firmer, with decent if not perfect uniformity on each sample. From the foot I get primarily corn flakes and cereal grain with a bit of sweet, dry sugar. There’s a bit of wood to be found as well if you’re willing to spend some time with it, as it doesn’t jump out immediately, and one sample shows a light peach note. The cold draw is a fairly average and if anything a touch loose, though nothing to be concerned about. Flavors here lean towards cream and an offering that sits between cereal grain and croissants.

There’s no delay getting to the flavor profile of the Cohiba Medio Siglo, as a knotted bunch of tastes and aromas jump off the cigar, with a good bit of black pepper, wood, leather and a touch of sourness being the most prominent. The cigar puts off a good amount of smoke early on, though it dissipates fairly quickly, even without the help of a slight breeze. The burn line is also progressing remarkably quick, as within just about 10 minutes of smoking I already nearly an inch of ash, enough to make me want to tap it off. Thankfully the cigar takes care of it for me, leaving less than an inch until the band will need to be removed. While the flavors early on need a bit of time to untangle themselves, retrohales are fairly straightforward with plentiful amounts of white pepper. For a cigar with plenty of flavor intensity, the overall strength is medium at best, as the lingering effect on my palate and system is relatively mild. 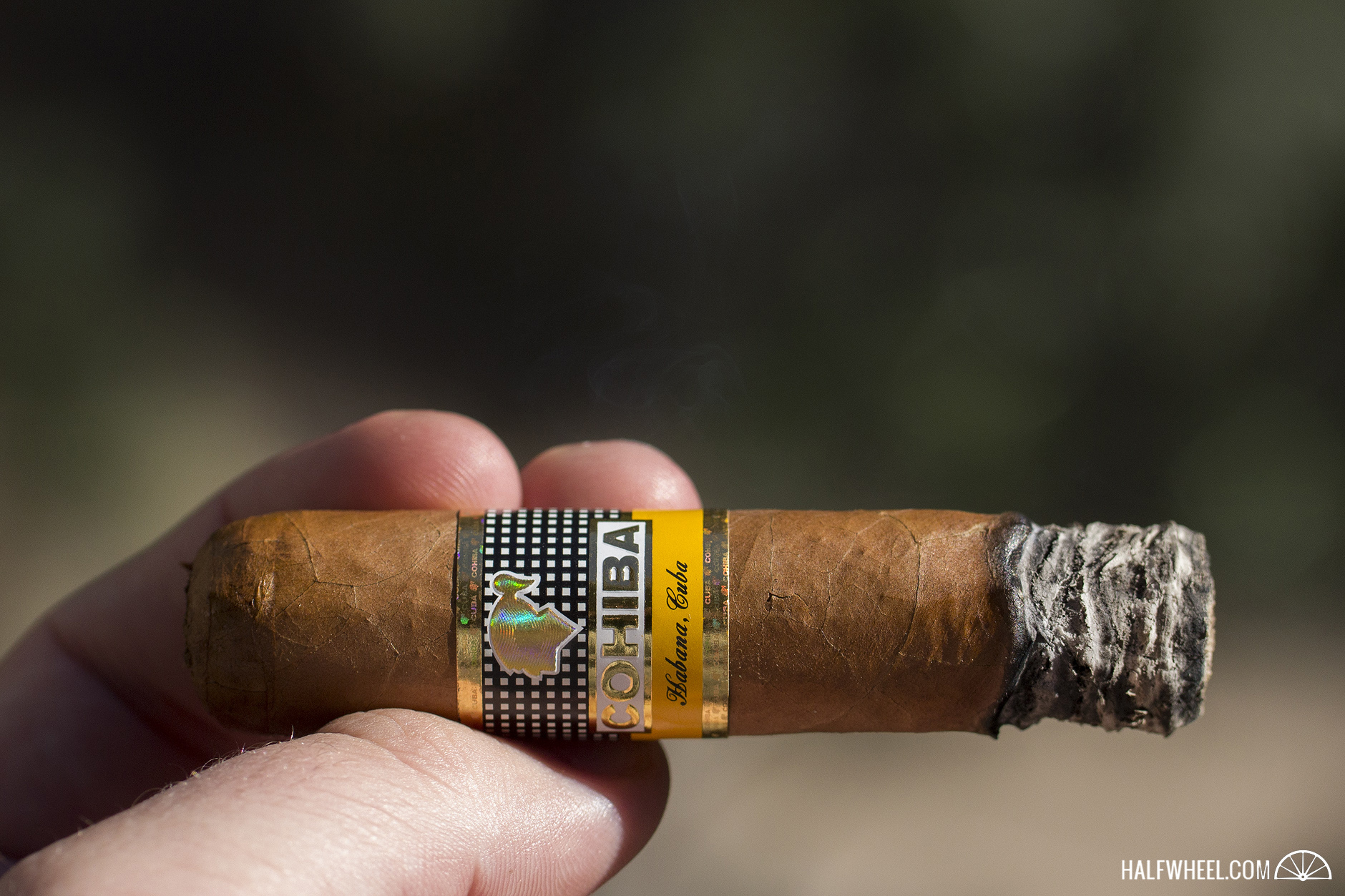 After a bit of a flavor roller coaster to start, the Cohiba Media Siglo straightens itself out, settling into a medium bodied and medium strength profile, though leaning more towards medium-plus in both areas. The black pepper has become a bit more prominent, with a dry background of wood and cereal grain cradling it. Retrohales are punchy by way of white pepper, but there is a sharper, more potent edge to them that almost burns the nostrils at times. There’s also just a bit of earthy gruffness coming into the cigar as the burn line approaches the band, giving it a bit more robustness than it has shown earlier. The combustion and burn line remain fantastic as the cigar motors through the midpoint, with the flavor picking up a bit of creaminess once the band needs to come off. 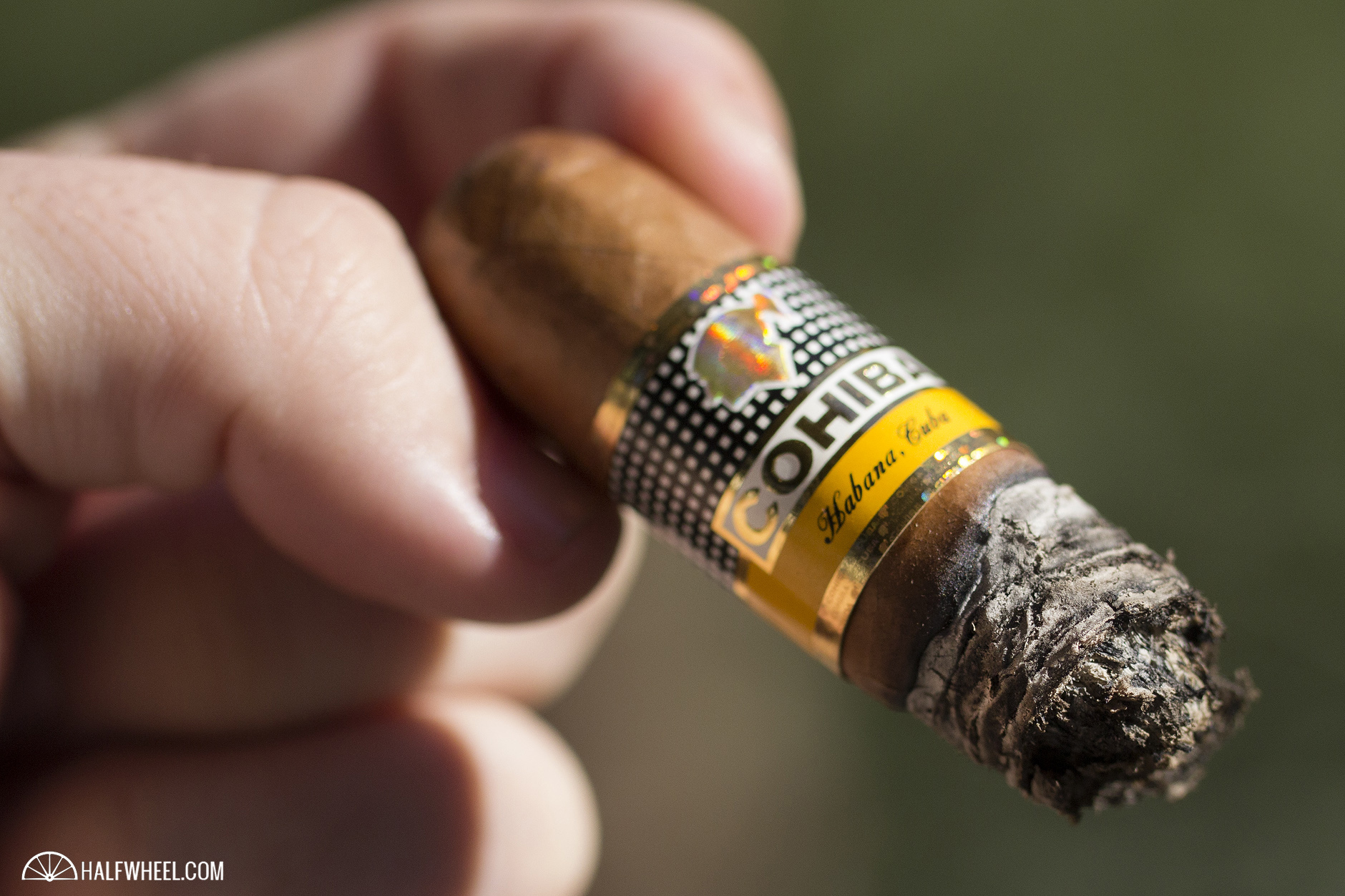 The bridge from second third to final third is one of the highlights of the cigar, as all the notes from the start are now in harmony, and thankfully without any of the sourness. The flavor warms up a bit with the core approaching, and I find myself slowing down just a bit, as the first two thirds burned in just about 30 minutes and I want to savor what the Cohiba Media Siglo is offering. The burn line goes off track for the first time with less than two inches to go, creating small coves where the burn line progresses too quickly, resulting in the look of a shoreline. The cigar manages to correct that issue on its own, and burns down nicely until sourness and some adverse impacts from the heat offer a clear suggestion that it’s time to retire the Media Siglo to the ashtray. 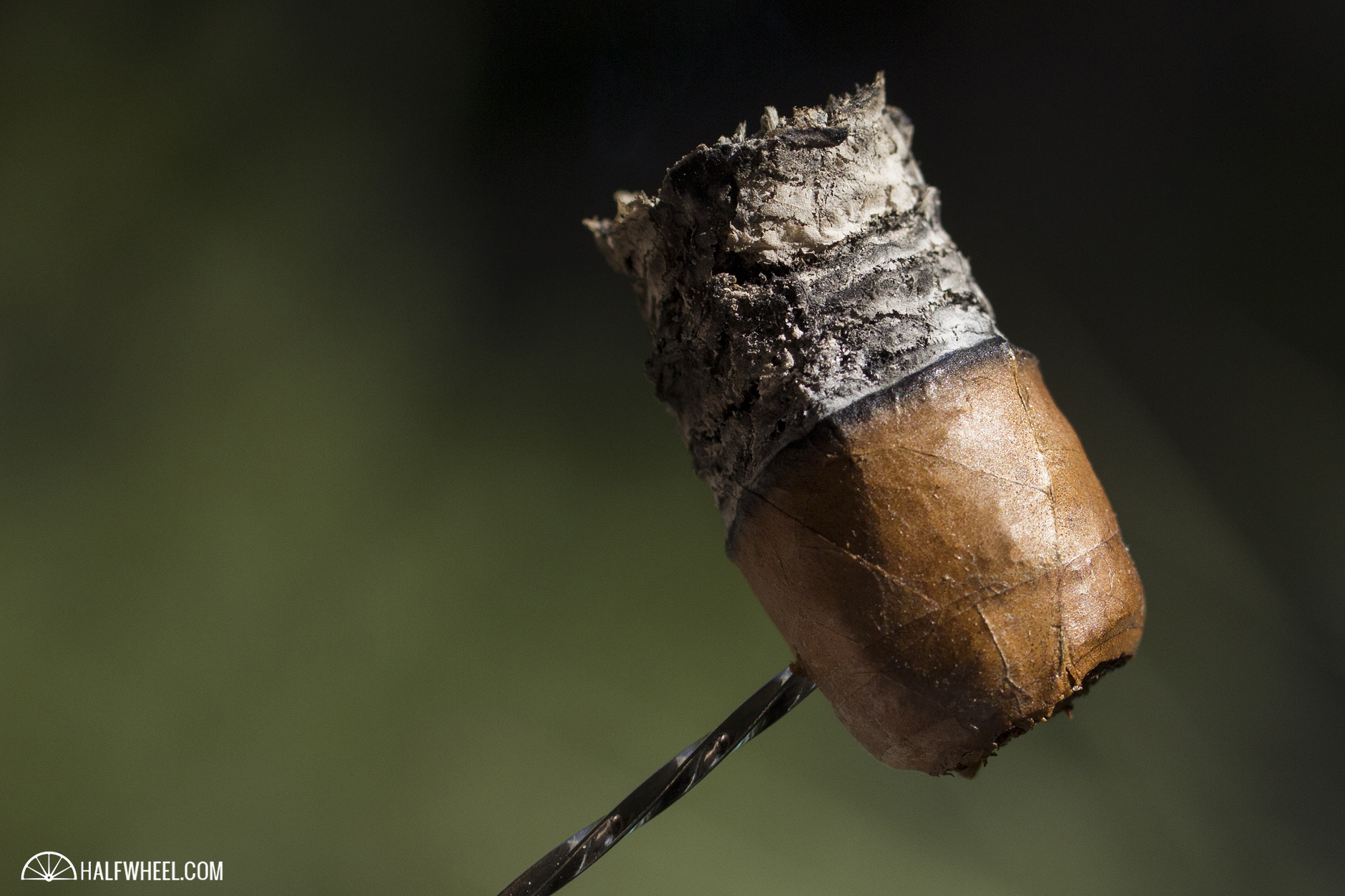 I’ve never been much of a regular Cohiba smoker; while I generally enjoy the profile and some vitolas are definite standouts, the price-to-value ratio doesn’t always seem worth it. But in this short and somewhat stout vitola, the blend definitely shines, perfect for a first stick of the day with a cup of coffee, an afternoon coffee break smoke or something to end the day on that won’t send you to bed with a gut punch. While I don’t yet know the price of the Cohiba Medio SIglo, it’s hard to see where this cigar will rank in terms of value, but what I can say with confidence is that both samples left me wanting another—both right away and in what I hope will be the very near future.