In the world of electronic cigar humidification, one brand really stands out; if you have an electronic humidifier, there’s a good chance it says Cigar Oasis on it. The New York-based company is certainly the category leader when it comes to consumer grade electronic humidifiers, though it’s now making specific overtures to the commercial space with a new product.

Cigar Oasis makes products designed to humidify from 100 cigars up to full cigar shops. As far as I’m concerned, the sweet spot for the company is the Magna, or now Magna 2.0, an electronic humidifier designed for cabinet humidors. Earlier this year, the company released the aforementioned Magna 2.0 ($200), a slightly updated version of the original Magna.

It measures 14 inches long, just shy of 6 7/8 inches wide and 6 1/2 inches tall. The ends of the humidor are only 3 5/8 inches tall, though the fan enclosure adds roughly 3 inches. The Magna 2.0 comes with the humidifier, a USB cable and adaptor for power, the red temperature and humidity gauge as well as super absorbent polymer beads. Noticeably missing is external fans; one of the changes from the Magna to the Magna 2.0 is the latter does not include external fans.

Cigar Oasis says the reason behind this is that it believes the internal fans are strong enough for most applications, though consumers can purchase two smaller 1 1/2 x 1 1/2 inch fans for $20. Before connecting anything, I found a place to mount the controller, which comes with included Velcro, and the fans, the latter of which was not particularly easy. I then placed the super absorbent polymer beads in the unit, added about a half gallon of distilled water and closed the unit. The first time, opening and closing the sliding and somewhat opaque reservoir of the Cigar Oasis can be a bit challenging due to the rubber seals that run across the rails of the unit. Eventually you get to used to it and there’s a small cut out with a removable cap on the top of the unit that makes refilling much easier. From there set up is easy; there are five I/O ports on one side of the black fan unit. There’s a small micro-USB female for power, an ethernet port to connect the controller, a slimline ribbon input for the Cigar Oasis Wi-Fi Attachment and two ports that can be used for daisy chaining the Cigar Oasis humidifiers. Operating the controller is pretty easy. There’s three buttons: up, down and a button that has what appears to be a light on it on the far ride. The first two work as expected and one thing I really enjoy is that they default to adjusting the humidity, meaning if you open the humidor and hit the down button, it will begin lowering the set humidity level. The button on the right can switch between Fahrenheit and Celsius as well as show highs and lows and set alarm levels as well as turn the display off. 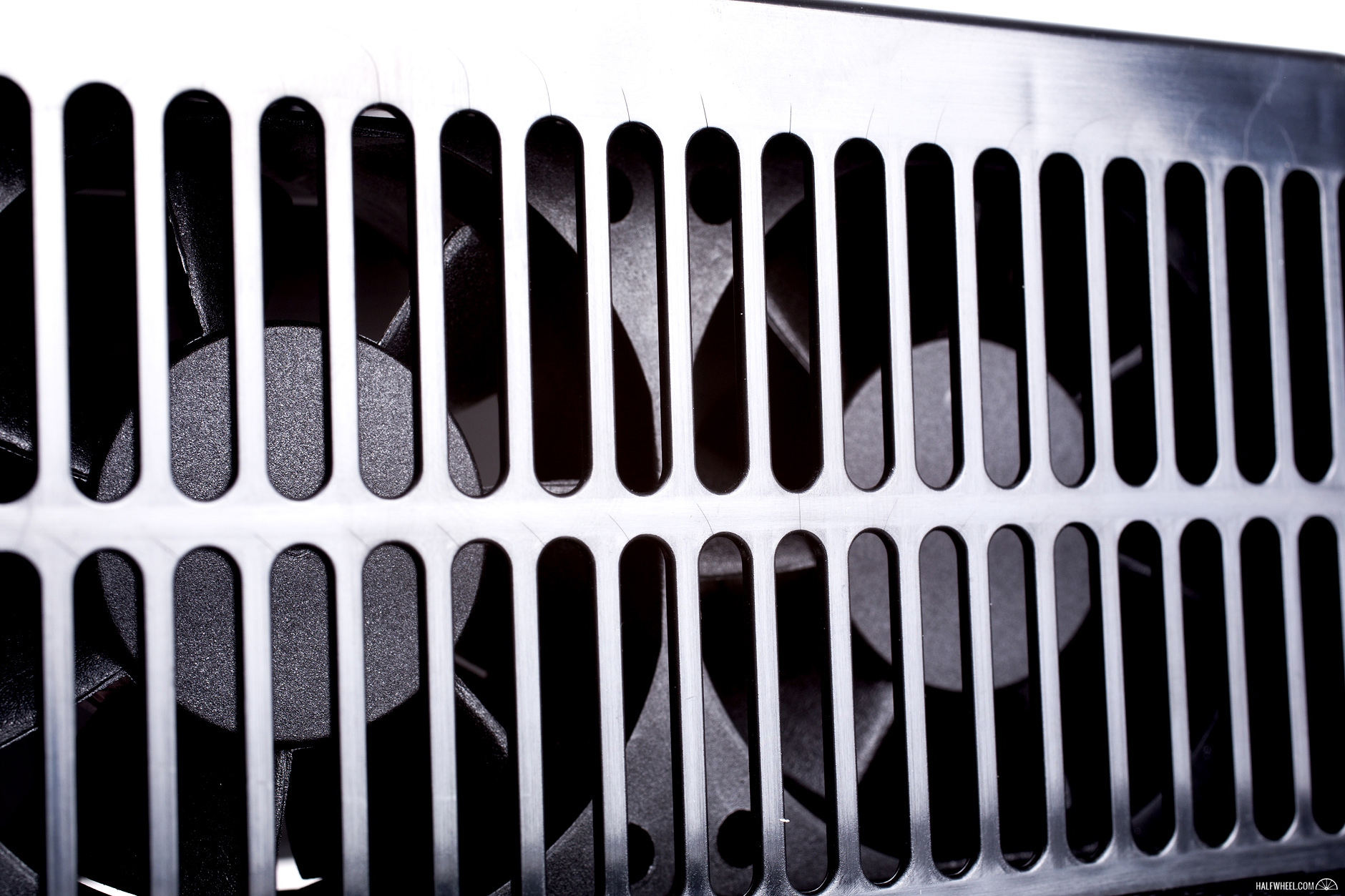 The humidifier has been updated with two larger fans that suck air in and blow it across the super absorbent polymer beads/water bed before exiting out of two large vents on the other side. These vents are covered by a hard plastic film that blows open when the fan is on, but stays shut when the fan is off. The idea here is to help reduce the chances of the Cigar Oasis over humidifying the environment. I’m honestly not sure this feature makes a huge difference, but it certainly doesn’t hurt and is an innovative touch. Although not new for Magna 2.0, the super absorbent polymer beads are a solid addition. While they look very similar to silicone beads like those used by Heartfelt Industries, once the beads are placed in contact with water they began to absorb the water and drastically expand, creating a very flimsy, larger gel ball that contains liquid. While I was not fond of it in HF Barcelona’s Gelly product, the application is pretty smart here. Super absorbent polymers absorb a lot of liquid—sometimes as much as 50 times their original shape—and then begin to release the moisture in a rate much quicker than anything else other than a bowl of water. For electronic humidifiers, the immense amount of moisture isn’t really a problem since they normally rely on a fan blowing on large volumes of water. The advantage the beads have over just water is that they can help to reduce spilling and will likely slow down, albeit not eliminate, the growth of mold—the latter of which started to appear about three months into my testing.

The other big advantage is that there’s virtually no detectable mist despite there being a fair amount of moisture in the air leaving the unit. As for the optional fans. I would generally skip the $20 purchase.

Bob Staebell of Aristocrat Humidors once told me that most cabinet humidors don’t need very many, if any, additional fans. The main reason is due to the fact that humidity rises and the opening and closing of the doors will suffice to keep air moving at a decent enough rate. As for the optional Cigar Oasis fans, they are low power computer fans that don’t move a ton of air. I tested this unit in Quality Importers’ HUM-2000, better known as the Tower of Power, an entry level cabinet humidor that stands 6 feet tall. I had no clue where to put the fans. The problem is they are weak enough that even putting them a quarter inch from a flat surface, i.e. the side of the humidor, blocked off almost all air flow. I ended up placing them below one of the ventilated shelves using a variety of washers to add space between the shelf and the fan because without them there was virtually no air flow.

After observing the fans run, I’m convinced they don’t do much other than provide an illusion of completeness as there really is not the much air flow even when they aren’t restricted.

The unit connects to the Cigar Oasis Wi-Fi Attachment ($118), something I reviewed here. There is a much improved version of the app, something that probably deserves its own review. For now, I’ll simply note that Magna 2.0 works with the attachment. It’s sort of challenging to test a product like this other than waiting for an issue to arise. After three months of use, there was a small growth of mold, maybe the size of a dime, but other than that the unit is running well and the mold easily wiped off. Third party hygrometers placed close to the control unit reveal humidity readings within .5 percent of what the external hygrometer reads, good enough for me.

The largest competitor to the Magna 2.0 is the original Magna. I’ve never tested the unit, but it’s obviously quite similar though I think the improvements far outweigh the fans. Cigars International sells a very familiar Hydra XG1000, which uses green florist’s foam, something I would stay away from. The Humidor Store sells a $200 option that is interesting though it uses a more rudimentary control unit and doesn’t have a clear bottom making it challenging to know the exact level of the remaining water. Finally, the aforementioned Aristocrat Humidors sells units starting at $300 that work quite well, though are certainly more expensive. None of those units have the Wi-Fi Attachment, or its capabilities, particularly the ability to see real-time, live data, and adjust humidity levels—all remotely. The $100 option isn’t something I find myself using quite frequently, but it is an option and one that makes the Magna 2.0 a tough product to beat. For anyone looking at a cabinet around the size of the HUM-2000 unit I tested it in, it’s an ideal option. I think for larger humidors I’d probably look at larger or multiple Aristocrat units, but for the vast majority of cabinet humidor owners, the Magna 2.0 is the right choice.

The unit for this review was provided to halfwheel by Cigar Oasis.