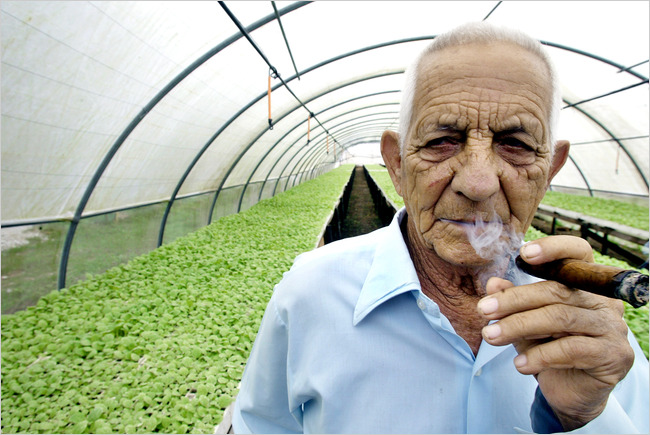 Cuban tobacco legend Alejandro Robaina, known in international cigar circles for producing the best of his country’s famous tobacco leaves, died on Saturday at the age of 91, a family friend said.

Robaina, the only Cuban grower with a cigar bearing his name, had been in ill health after being diagnosed with cancer last year and had declined in recent days, said friend Sergio Hernandez, a cigar distributor living in Havana.

He died at his modest home on his 40-acre (16 hectare) farm near the town of San Luis in Cuba’s Vuelta Abajo tobacco region near the western city of Pinar del Rio.

A frail Robaina celebrated his 91st birthday at his farm on March 20 surrounded by two dozen friends and family. He sat quietly in a chair smoking one of his famous cigars.

He told Reuters in a brief interview that the secret to growing the best tobacco was simple.

“You have to love the land and care for it,” he said.

As the tobacco grows, he said “it talks to you, it tells you what it needs and you must listen.”

Robaina spent his life mostly on his farm, tending to the surrounding tobacco fields. But he also traveled the world as Cuba’s unofficial ambassador for tobacco.

He once attended a function with King Juan Carlos in Spain where the musician Sting asked for his autograph.

In recent years, he passed on his knowledge of tobacco growing to his family, and grandson Hiroshi had taken over most of the day-to-day management of the crop.

As his fame grew, Robaina’s farm became a favorite destination for cigar lovers from all over the world, and until his health failed he would regularly welcome them into his home or for talks on the front porch.

“He once told me he was a millionaire because he had a million friends all over the world. He had a big heart and he treated everyone the same,” Hernandez said.

Now, he said, “the godfather of Cuban tobacco is gone.”

Rest in Peace Alejandro. You will be missed.