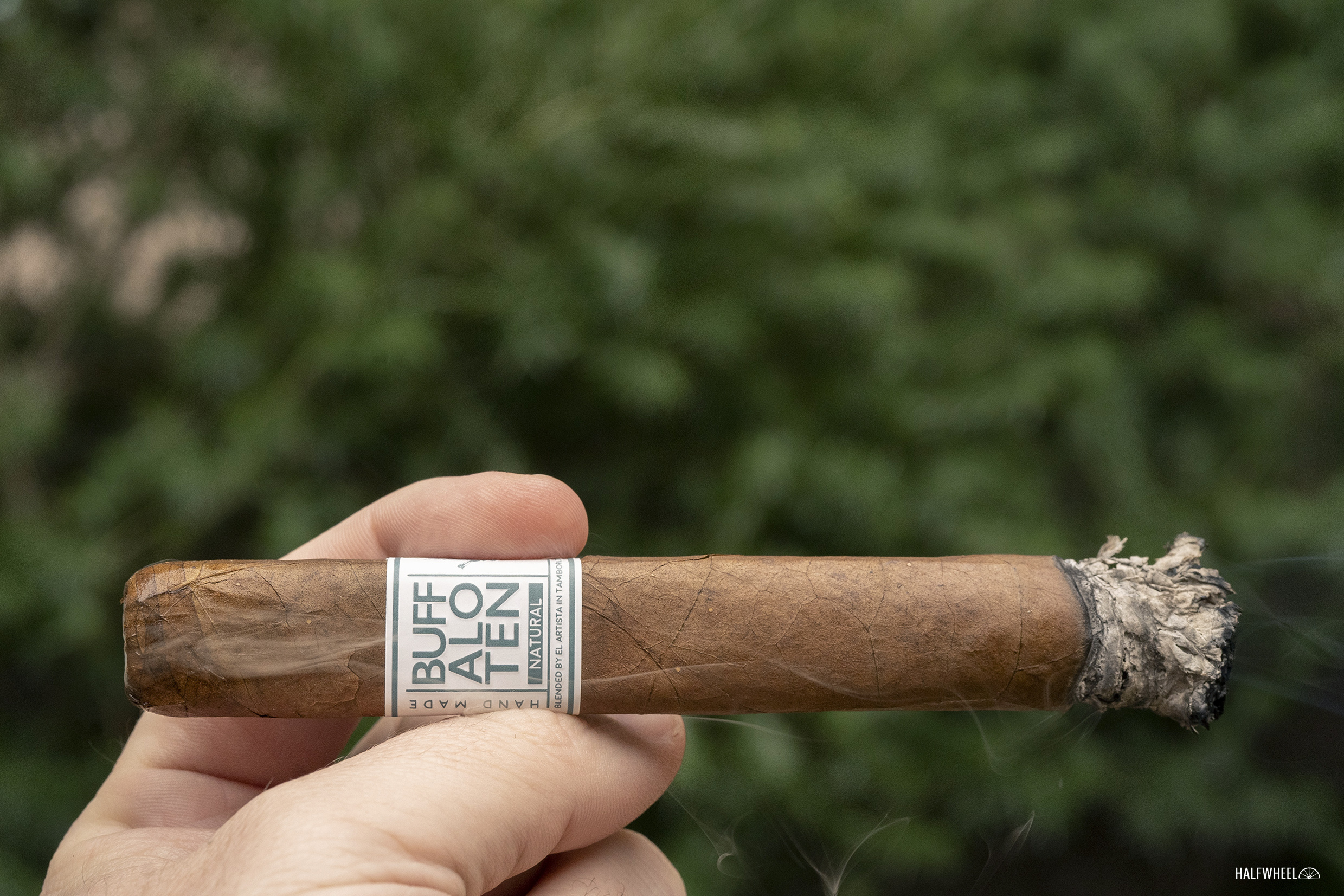 Cigar manufacturers have long had the challenge of balancing quality with cost as they create new cigars to bring to market. That might mean making a blend for a certain price point or trying to deliver a cigar with flavor and performance that outshines its price tag. That latter challenge was what Tabacalera El Artista decided to tackle when it released the Buffalo TEN line in 2019.

The first release under the Buffalo TEN line was a maduro version that uses a Mexican San Andrés maduro wrapper over a Dominican negrito binder and fillers from the United States and Colombia, as well as Dominican tobacco grown in El Artista’s fields, namely a T-13 hybrid leaf. The binder is also grown in the Dominican Republic by El Artista. It was released with a price tag of just $4.50 per cigar.

“We feel this is the beginning of a great flagship product line for us,” said Radhames ‘Ram’ Rodriguez, president of El Artista Cigars, via a press release. “Not only does it smoke great but the whole package looks amazing. We have developed something that we feel cannot be beat.”

“Buffalo TEN truly demonstrates the strengths of El Artista,” added Kevin Newman, El Artista’s director of sales & marketing, via a press release. “The factory team worked with us to source some of the best tobaccos available and integrate a few factory-exclusives for a phenomenal blend at an incredible price.”

In 2020, the company expanded the Buffalo TEN with the release of a natural version, a cigar that uses an Ecuadorian-grown habano wrapper, Indonesian Sumatra binder, and a blend of Nicaraguan, Dominican and American fillers. Like the original, it offered in a 6 x 50 box pressed toro vitola. Also like the original, it has an affordable price of $5 per cigar, or $22.50 for a paper-wrapped five pack.

“The outstanding sales performance and consumer response of the original Buffalo TEN Maduro meant we had to do a strong follow up,” said Rodriguez. “The process was complicated because we wanted a cigar that felt like a Buffalo TEN but was a new smoking experience and not just a clone in a different wrapper.”

Speaking of that wrapper, it is a leaf that Rodriguez said he refers to as a corojo leaf, while the company refers to it as a habano leaf. In discussing the terminology difference for the varietal, he noted that corojo seed is originally from Cuba and thus a habano, similar to HVA, habano 2000, criollo 98 and others. He also noted that the wrapper for the Buffalo TEN Natural comes from the second or third primings of the tobacco plant, which is on the lower portion of the plant. That means it gets a bit more shade, generally giving it a lighter color than the upper leaves, as well as a bit milder flavor.

This figures to be the second of three releases for the Buffalo TEN line, as the stickers on the five-packs indicate that a Connecticut version is forthcoming. 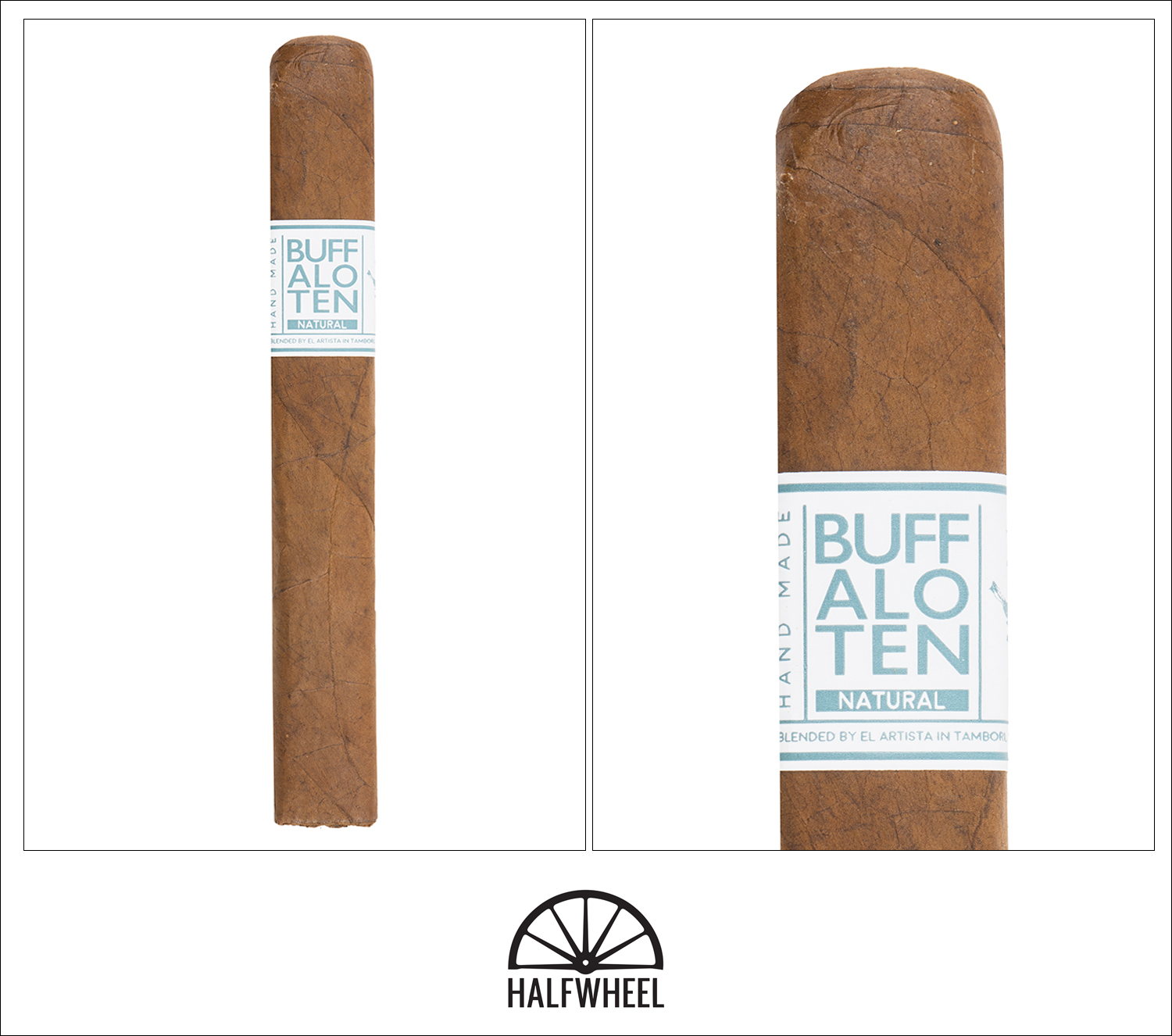 The Buffalo TEN Natural Toro is a well pressed cigar, very rectangular in shape with sharp corners and a matte finish that implies it has been subject to some weight. There’s also some color variance within each leaf that is easily seen at the seam lines. The wrapper feels like it’s on the fragile side, and some small cracks around the feet confirm my suspicion, though not knowing exactly how they got to me, I’m assuming they were handled with reasonable levels of care along the way. Either way, I am already concerned about the durability of this outer leaf. The foot has a thick aroma to it, both sweet and a bit spicy before black pepper makes its way into the mix. There’s some light woodiness as well, and certain samples are fairly fragrant. The cold draw skews loose, even for a box-pressed cigar, and the flavor is both lighter and thinner than the aroma, with some peanuts, dry wood and a bit of salt-based seasoning.

As I take my first puffs of the Buffalo TEN Natural Toro, I’m greeted by a flavor that is about as hearty as the pre-light aroma, though without the sweetness. There is still spiciness, black pepper and dry wood, though that is a bit diminished and shows up more on the lingering, tingly finish. I can’t quite place where the added body is coming from early on as the cigar isn’t really earthy, so I’m left to think of pretzel dough or something in that vein, while individual cigars elicit thoughts of a campfire. One sample is drier than the other two, but the starting point is pretty consistent. With the first sample, I’m concerned about the draw, particularly how the wrapper may be affecting it. The first few puffs of that cigar are still rather open, and I thought I heard air coming from somewhere it shouldn’t be, and sure enough a very small crack developed in the middle of the cigar. The early puffs put out a decent amount of smoke, though as I stop to admire one, I notice even more cracks developing on the first sample, and a bit of the wrapper has loosened up near the head of the cigar. Body builds and flavor intensifies as the burn line progresses, picking up some more pronounced black pepper and earthiness, with the flavor turning a bit robust at times. Yet there are also occasional flirtations with a creaminess that helps to soften and sweeten the profile just a touch. While the wrapper issues still concern me, the draw is better, and combustion and smoke production don’t seem to be affected. Flavor and body are now medium-full, while strength is medium-plus and seemingly catching up.

There is certainly no shortage of flavor in the Buffalo TEN Natural, and at the start of the second third it is quite good: an earthy, slightly peppery profile that doesn’t suggest anything about coming from a $5 cigar. Retrohales are brighter and a bit lighter but still quite pepper-forward, with a shorter finish than what the palate gets. While I almost always encourage retrohaling, it is especially worthwhile here as the two experiences complement each other well and it helps me get that much more out of the cigar, further enhancing its value proposition. One cigar’s earthiness is a few ticks lighter than the others, bringing in a touch of white pepper. Regardless, there has been little to complain about as the cigar approaches the midpoint. Across the midpoint, the profile feels just a bit lighter, though it hasn’t given up all of its earthiness. The woods are less dry and a bit richer now, the black pepper isn’t quite as dominant and there seems to be a bit of sweetness emerging, though what exactly it is remains a bit opaque. I’m thinking of some amber-hued things like maple syrup and syrupy liquors like cognac and rum, though neither is quite right. A retrohale near the end of this section shows that the Buffalo TEN Natural still has a good amount of black pepper in it to tingle the nostrils, with some of that tingle making its way down towards the palate and throat as well. Flavor and body are medium-plus to medium-full, and strength has backed off a touch, now closer to medium. Construction has stabilized and there are no further issues with the wrapper, while draw, combustion and smoke production are all very good. As the Buffalo TEN Natural Toro gets into its final third, I feel compelled to note that there aren’t a lot of pronounced flavor transitions, though it’s not something I’m even close to faulting the cigar for as the flavor has been remarkably enjoyable as is. There are some spots where the profile might get a bit sharp, seemingly due to a slight shift in the pepper, but it’s never too pronounced or off-putting. As the final third progresses, I get a bit more earthy terroir, but given the countries of origin in the blend it’s hard to pin it to one particular region. If anything, it’s lighter in body than I might have imagined based on some of those tobaccos, but it’s not lacking whatsoever. It’s a pretty straight line from start to finish, with some changes in the body as well as the style and intensity of the pepper being the most notable things about the Buffalo TEN Natural Toro, but it is still very flavorful, always engaging on the senses, and other than the issues with the wrapper leaf, well-constructed with minimal burn issues. Flavor finishes around medium-full, body is medium and strength is medium-plus. 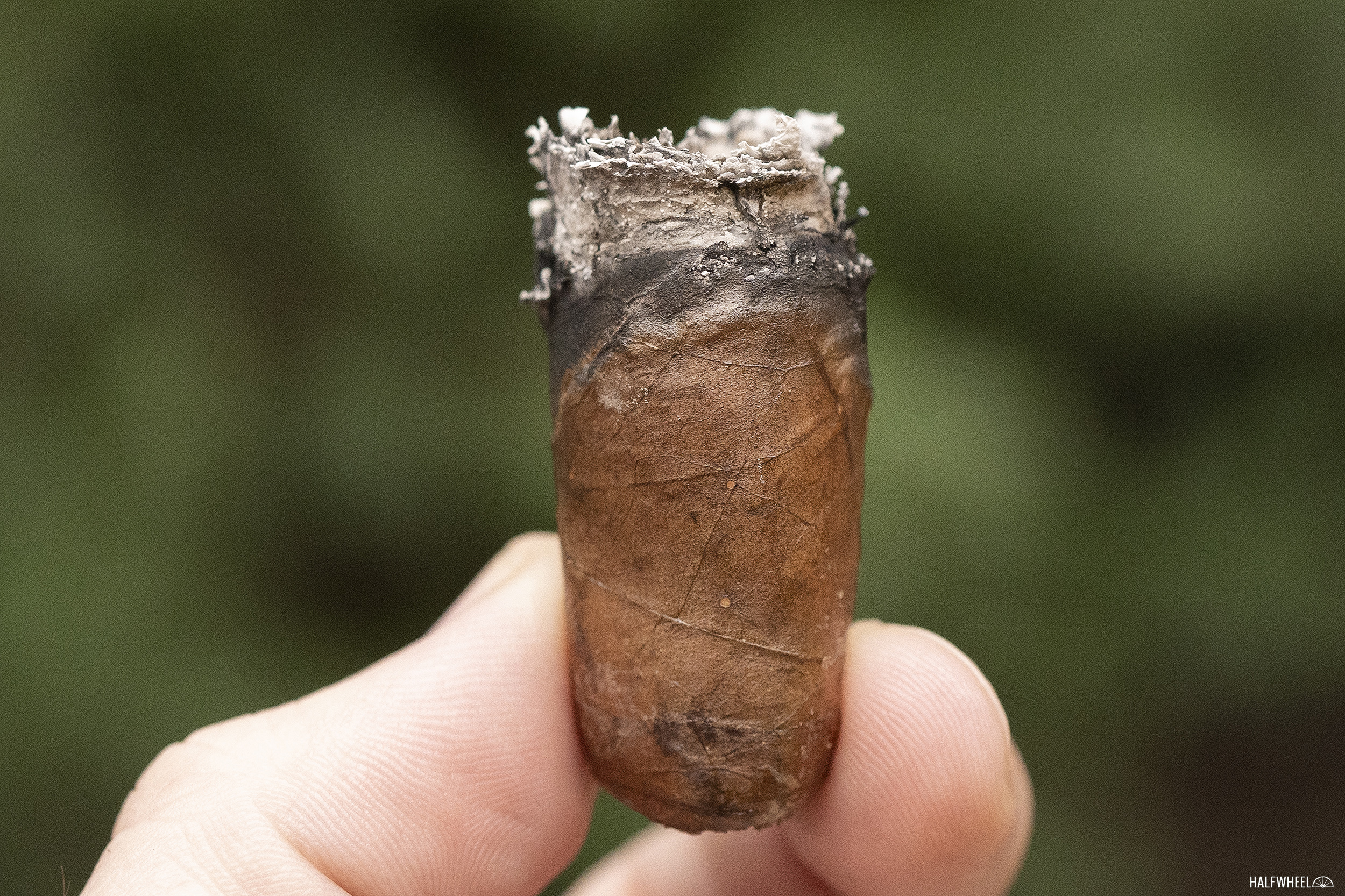 When I started smoking cigars with some level of seriousness, there was a push among manufacturers to deliver a flavorful, fully satisfying cigar for about $5. That was 10 years ago, and short of a few cigars that I remember from that era, not a lot of other ones have come close to achieving that goal. The Buffalo TEN Natural Toro does it and then some, easily delivering a profile that is flavorful and fairly detailed from start to finish. The fragility of the wrapper is a concern, and hopefully it is an isolated issue. Even with that flaw, the cigars are constructed quite well and are easy to light and enjoy. While it might lack a bit in complexity and offering a breadth of flavors, what it does offer is incredibly enjoyable, and better than a host of cigars priced at twice the amount. Highly enjoyable and highly recommended.