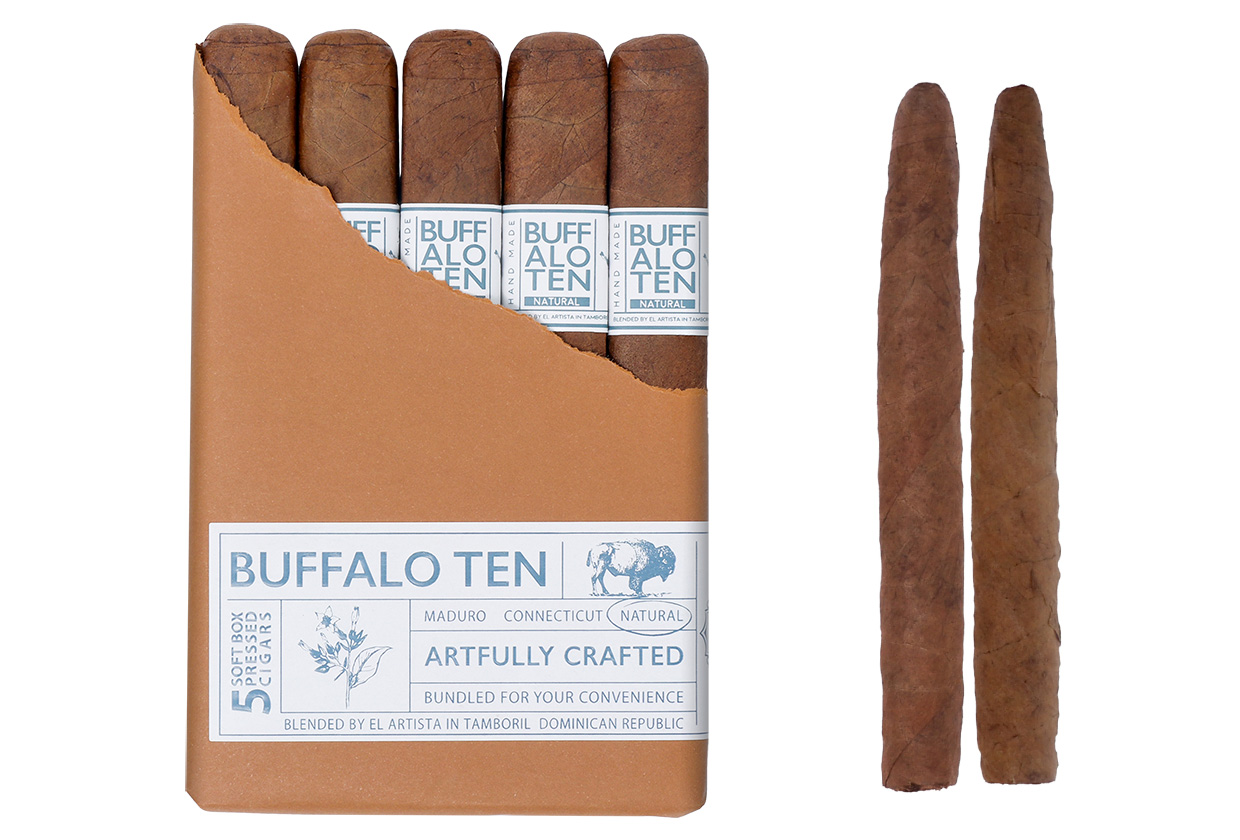 Two of El Artista Cigars’s lines are getting new extensions, the Buffalo TEN Natural and the Fugly Cheroots Claro.

The Buffalo TEN Natural uses El Artista’s own Ecuadorian-grown habano wrapper, an Indonesian Sumatra binder, and a proprietary blend of Nicaraguan, Dominican, and American filler tobaccos. It is offered in a single, 6 x 50 toro vitola that gets a soft box press. It is priced at $5 per cigar, $22.50 for a paper-wrapped five-pack.

“The outstanding sales performance and consumer response of the original Buffalo TEN Maduro meant we had to do a strong follow up,” said Ram Rodriguez, president of El Artista Cigars, via a press release. “The process was complicated because we wanted a cigar that felt like a Buffalo TEN but was a new smoking experience and not just a clone in a different wrapper.”

Buffalo TEN debuted at the 2019 IPCPR Convention & Trade Show, and featured a Mexican San Andrés maduro wrapper over a Dominican negrito binder and fillers from the USA and Colombia, as well as Dominican tobacco grown in El Artista’s fields, namely a T-13 hybrid leaf. The binder is also grown by El Artista.

It will be made available to retailers in North America, South America and Europe beginning on Sept. 23.

The company’s Fugly line is also getting a new version, the Fugly Claro, which features a Dominican corojo claro wrapper grown by El Artista. The cigar does not use a binder, so the wrapper sits atop a filler of strong, long-leaf ligero tobaccos from the USA and Dominican Republic. Each cigar is rolled by hand without the use of molds, meaning that the specific dimensions vary a bit from cigar to cigar. Each one is generally five inches long, with a ring gauge that varies from 37 to 40, essentially that of a lancero.

It is the follow-up to the original Fugly, which was released in September 2018. That cheroot uses a Mexican San Andrés wrapper over Dominican criollo 98 ligero and Pennsylvania broadleaf fillers.

“The break-out success of Fugly Cheroots caught everyone by surprise in 2019 when the brand exceeded sales forecasts and 2020 same-store sales were utterly impressive,” said Kevin Newman, director of sales and marketing for El Artista Cigars. “We had no clue this strong and frankly ugly hand-rolled cheroot would take the US by storm, but here we are!” he added.

Pricing is set at $3 per cigar, and it is offered in 100-count chest style rough-hewn boxes. It will also be made available on Sept. 23, but only to retailers based in the United States.

Both cigars are made at Tabacalera El Artista in Tamboril, Dominican Republic.