There have certainly been some cigars with memorable names over the years. Some are funny, some are double entendres, some are simply provocative. And then there is Magic Toast.

From the first time I heard about the cigar back in 2016 when it was released ahead of pending FDA regulations, and even to this day, my mind was immediately filled with images of heated bread with supernatural attributes. But that is not what the cigar is named for, at least not the bread portion.

As company founder Alan Rubin tells the story, he was visiting a new tobacco field in Honduras, not long after arriving in the country for a visit. Since it had gotten dark, the group he was with resorted to using flashlights and truck lights to see the tobacco, which he called an “awe-inspiring experience…almost magical.” As such, the group pulled a bottle of whisky from the truck and proposed a toast to the future use of the tobacco, which would be this cigar, and Magic Toast was born.

The blend uses a mix of Honduran and Nicaragua tobacco: the wrapper comes from Honduras, the dual binders come from both countries, as does the filler. It is produced at the Raíces Cubanas factory in Danlí, Honduras. 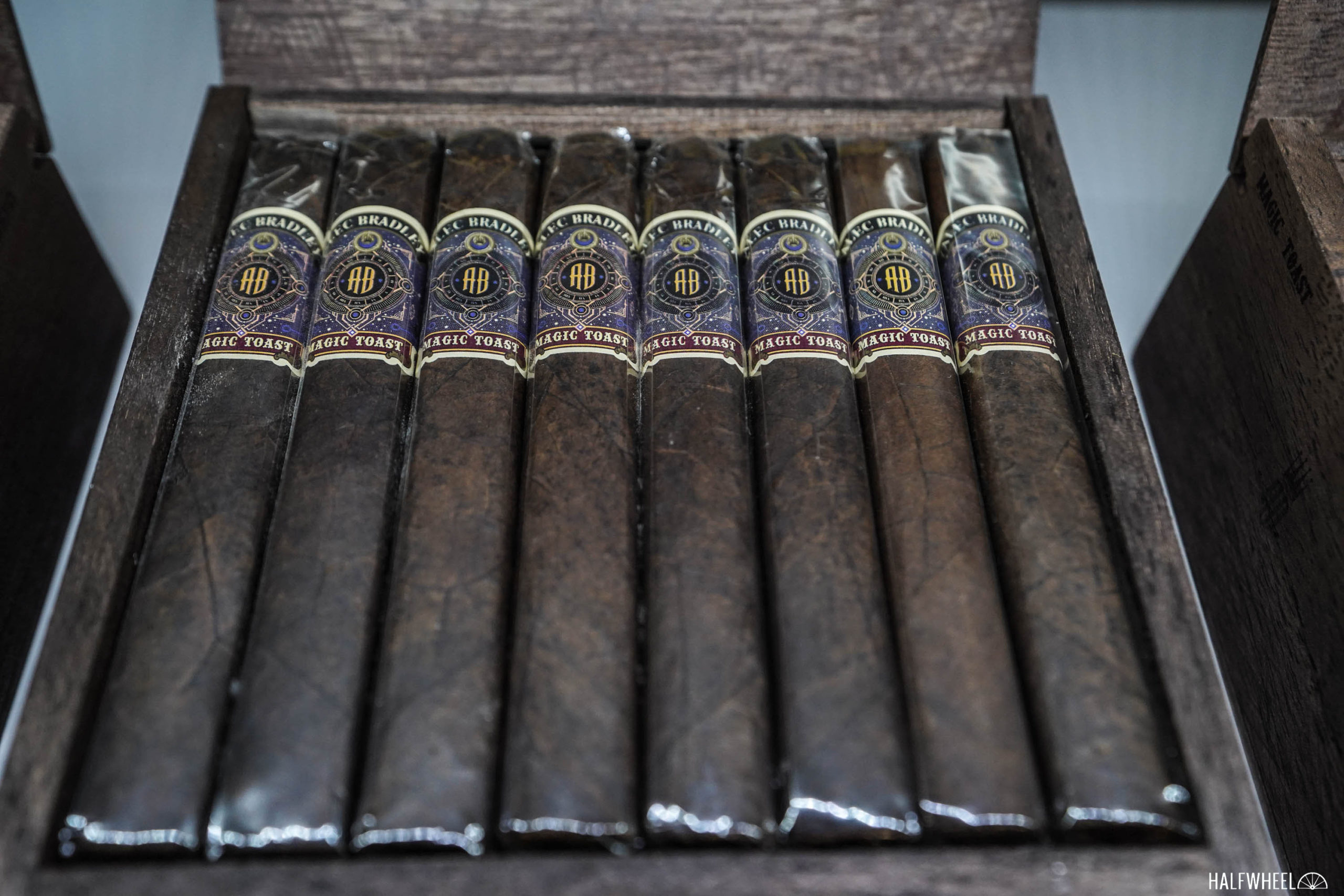 After growing to four regular production sizes, Alec Bradley decided to release a fifth size as an exclusive to retailers who attended the 2021 PCA Convention & Trade Show. It would be a 6 x 54 box-pressed toro, offered in 24-count boxes and with a single cigar MSRP of $11.

In addition to being limited to retailers who attended the trade show, it would also be the first box-pressed size in the line. Production was limited to just 1,000 boxes. As I inspect the Alec Bradley Magic Toast Box Pressed Gran Toro, I find a familiar firmness of the box-pressed vitola as well as an oily wrapper. The one thing that stands out is that the cigar feels plumped up a bit, and it feels as if the front and back are a bit more rounded than the sides. The Magic Toast has a dark, slightly mottled wrapper, one that gets lighter around the veins, which in turn reveals the vein structure quite vividly. Those veins aren’t big but their network stands out easily, as do the seam lines, almost as if the process of cutting the leaf to get the wrapper produced a shade change. The foot has an aroma that reminds me of a hearty red wine, though with a lot of damp earth as well as some chocolate and rich wood, with one sample reminding me of wine barrels. The cold draw on two cigars is firm while the third is smooth and closer to being loose than I would like. Regardless of the airflow, the flavor is not quite as vibrant as the unlit tobacco’s aroma, though many of the sensations are the same. It’s a profile that isn’t overly sweet or peppery, yet there is a bit of a red table wine flavor ahead of light, rich earth.

The Alec Bradley Magic Toast Box Pressed Gran Toro starts off with an impressively rich flavor profile, mixing a bit of sweet earth, terroir, and black pepper. Depending on the pepper, the profile either comes across a bit more like a hearty red wine—such as a Spanish Toro or any number of South American varietals—or leads with the black pepper, followed by damp earth and then bringing about the wine flavor. Regardless of how the flavor stars, the retrohales are consistently pepper-forward with a bit of smokiness on the finish. By the one-inch mark there is a bit of room temperature black coffee entering the profile, notably by way of a touch of acidity in the profile, which is just mild enough to be noticeable but not enough to be dominating. The flavor picks up a touch of coffee grounds as the first third wraps up, spending most of this section at medium-plus in flavor, medium-plus in body, and medium-minus in strength. Construction and combustion are very good, smoke production is solid, and the draw is problem-free.

The second third of the Alec Bradley Magic Toast Box Pressed Gran Toro adds a bit of creaminess and softness to the profile, a change that when thought about on its own leads me to think of a marshmallow, yet that doesn’t seem quite right in light of the overall profile. That’s because there is still earth and black pepper driving the profile, while the red wine note from earlier has largely faded away despite a bit of old vine sensations still hanging around. The midway point sees the flavor dry out a bit and pick up a sharper wood flavor as the main accent. It’s still a complex flavor profile, though the harmoniousness of the flavors isn’t as tight as it was in the first half, as each flavor feels like it’s trying to make a distinct impression. In addition to that, the earth picks up a bit of grittiness and the pepper continues to sharpen, eliciting a more pronounced physical reaction from my taste buds. Retrohales, meanwhile, are lighter and smoother, with a bit of white pepper accenting a mildly creamy base, which makes it an easy and enjoyable accent to the flavor. The burn line has a tendency to go askew a bit in the second third, though it’s not enough to warrant a touch-up. There can also be some struggles with combustion in the second half of this section, and I’m not sure I have figured out exactly what kind of pace this cigar is requesting from me. Flavor is medium-full, body is medium-plus, and strength is creeping past medium. 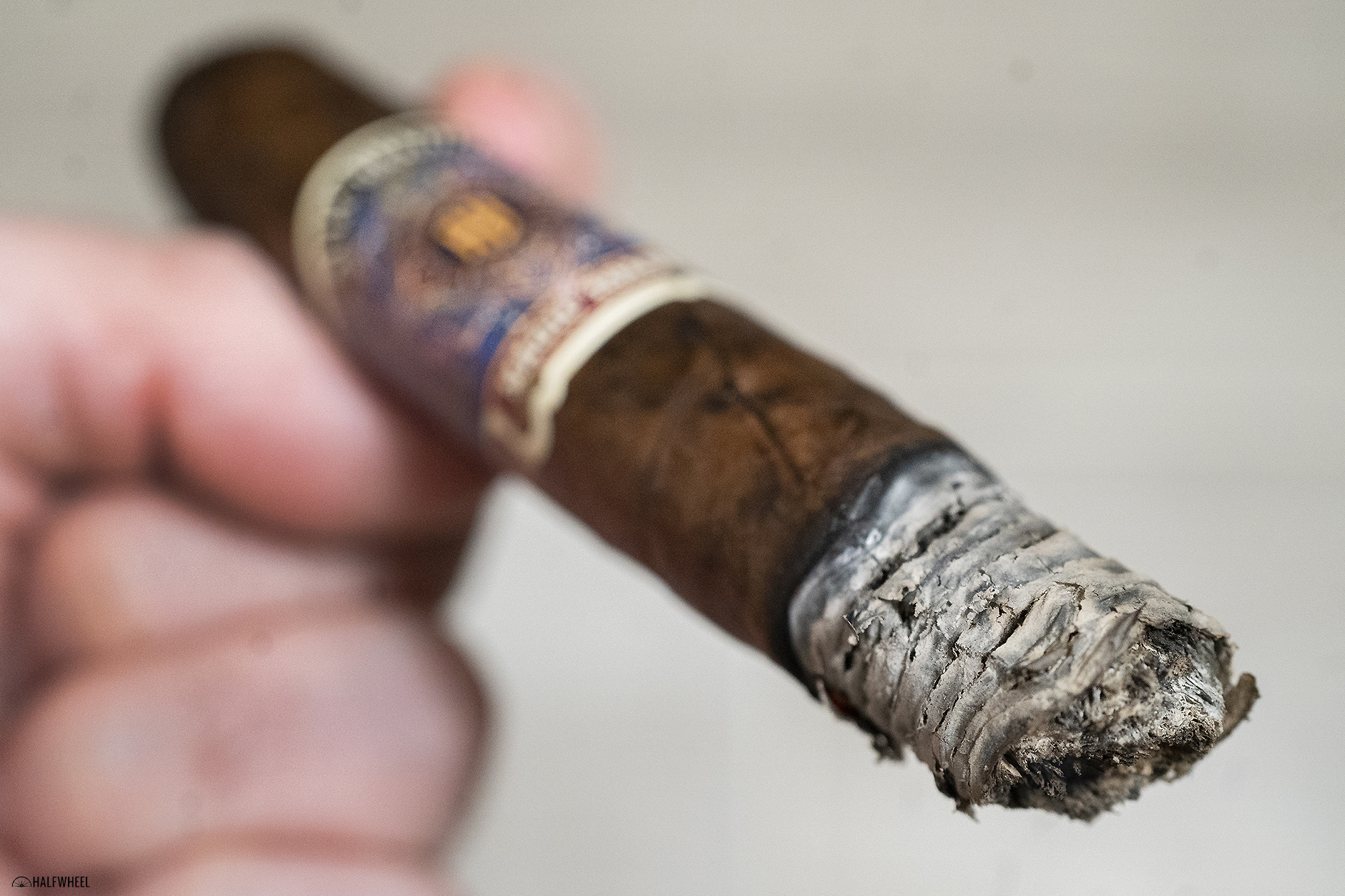 Keeping the trend going from the second third, the Alec Bradley Magic Toast Box Pressed Gran Toro keeps getting a bit sharper and more pointed in its final third, mainly by way of pepper and a building damp wood flavor that hits the palate with some sharpness. The retrohales that I praised just a few minutes ago are also a bit more vibrant but still quite enjoyable. While it seemed like the flavors would continue to be headed in their own directions, they come back together about an inch into the final third, just about where the band would be. That return to harmony not only helps balance and complexity but also seems to bring about a bit of chocolate. The profile still has its more pointed aspects, drawing from both the black pepper and the rocky earth, but things are definitely in a better spot on the whole. The flavor continues to evolve even as the cigar’s conclusion approaches, and there are times I get a bit of roast pork, giving the profile a bit of a savory, meaty accent. The Alec Bradley Magic Toast Box Pressed Gran Toro has a lot of positive attributes to offer: the first and third portions are impressively rich and complex, and the journey from first puff is one that keeps the palate engaged and on its proverbial toes. The second third is marred only by the flavors getting a bit too individualistic, which while still plenty enjoyable, costs the cigar its complexity. Construction and combustion, while good, weren't perfect. Two samples showed some combustion issues in their second halves and each sample struggled to maintain an even burn line. All that said, the Alec Bradley Magic Toast Box Pressed Gran Toro is still an enjoyable experience, and one that I would suggest fans of the line try in comparison to the vitolas they smoke more regularly. But regardless of whether or not you've smoked the Magic Toast before, I think this vitola provides a pretty solid experience.