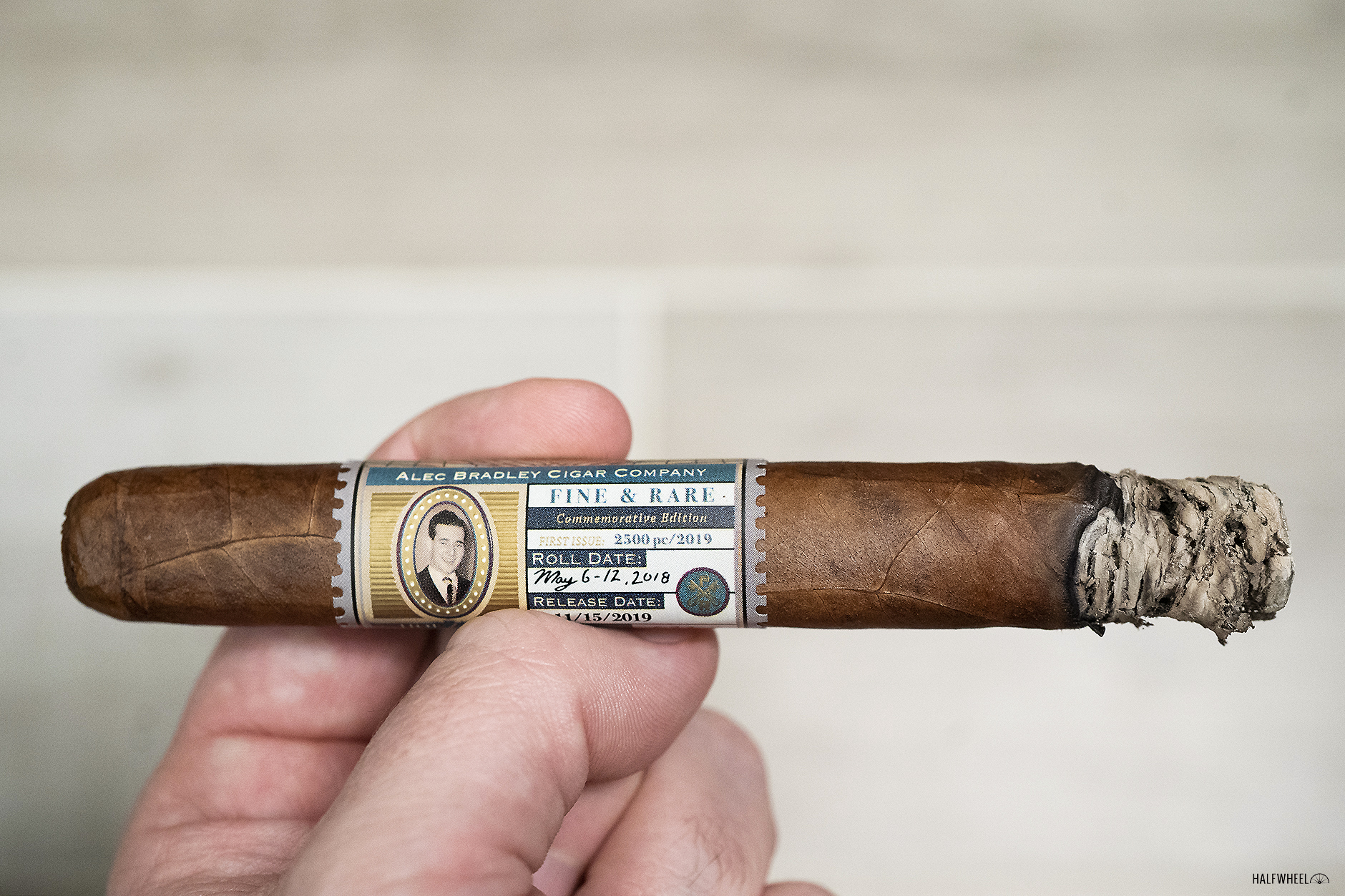 As you might have read on this site recently, there is a new Alec Bradley Fine & Rare scheduled to arrive in stores in April. It will be the 11th year of the Fine & Rare series—with the 2020 version a re-release of five previous blends—and is not only the company’s highest-end offering but also one that became known for something you don’t hear about every day: using 10 different tobaccos in its blend.

The 2019 release, the Alec Bradley Fine & Rare HOF / 506, was also notable for being a cigar to honor David Rubin, the father of Alan Rubin, Alec Bradley’s founder, who passed away in late 2018.

“My father brought joy to everyone around him,” said Rubin in a press release. “The only way I knew how to spread joy in his honor was through a cigar that was dedicated to him.”

The elder Rubin was more than just a father to his son, the two had worked together in a family business since 1982. Even when David Rubin went into retirement and Alan started Alec Bradley, it wasn’t long before he joined his son’s company, helping around the office with a number of tasks. 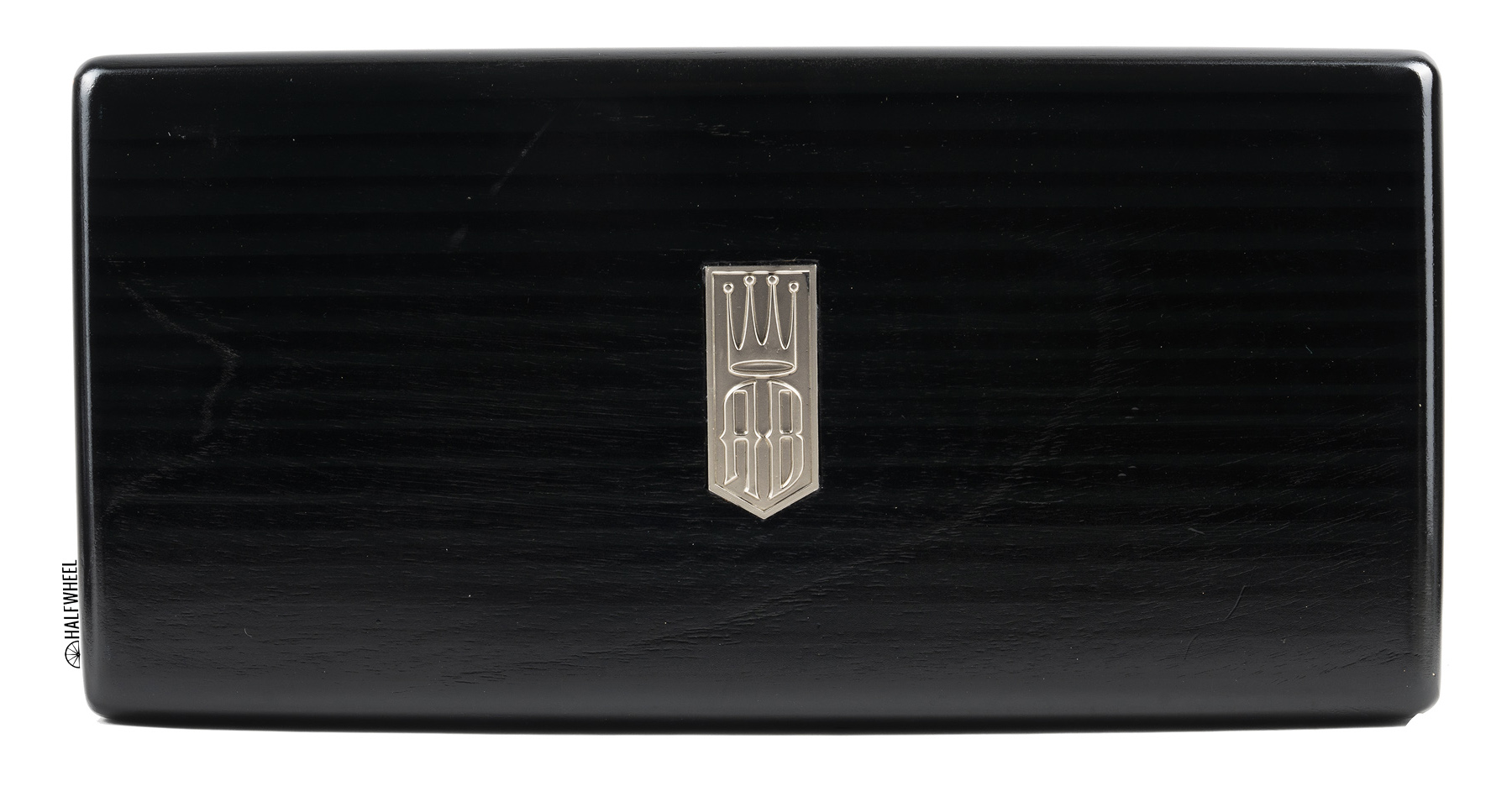 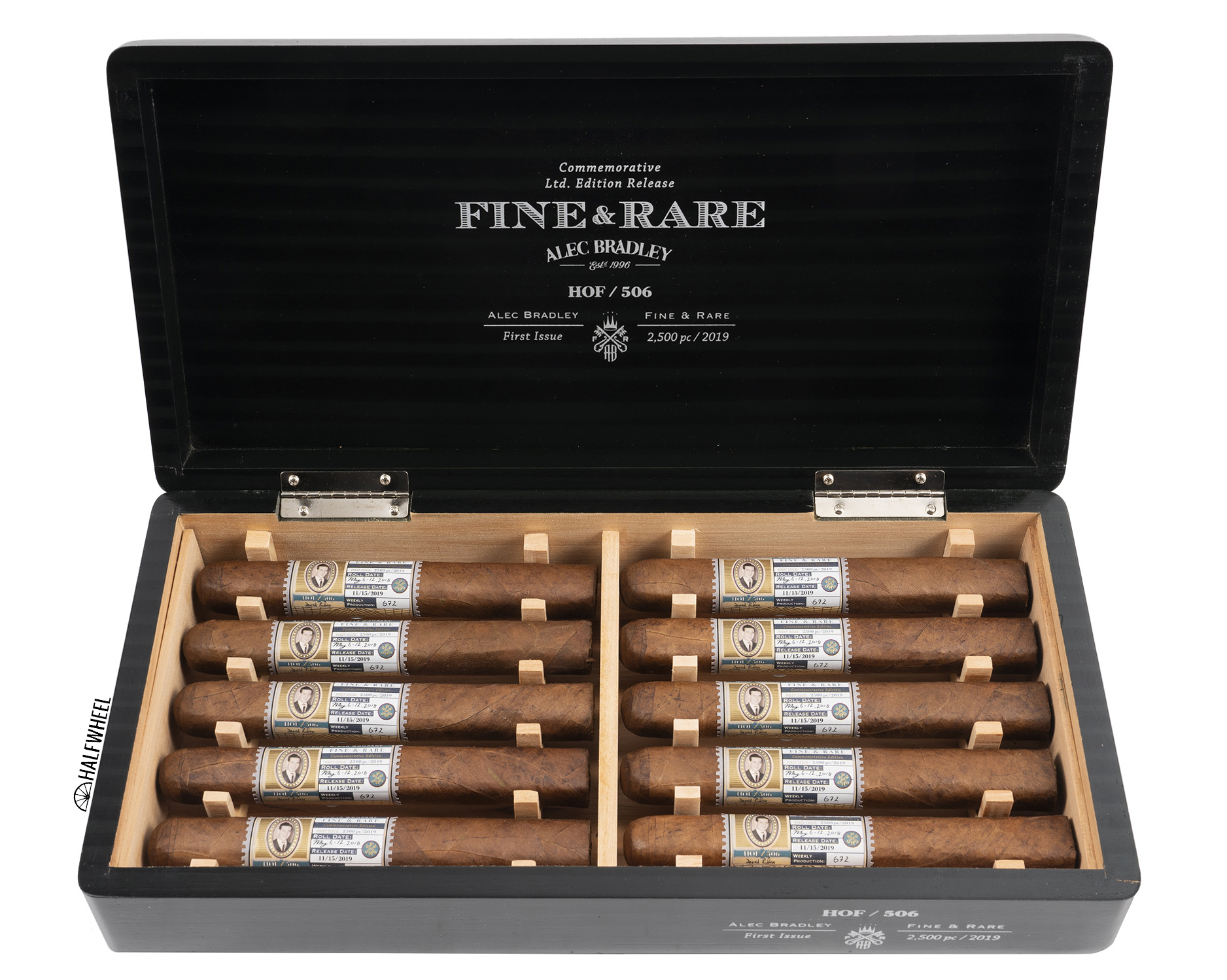 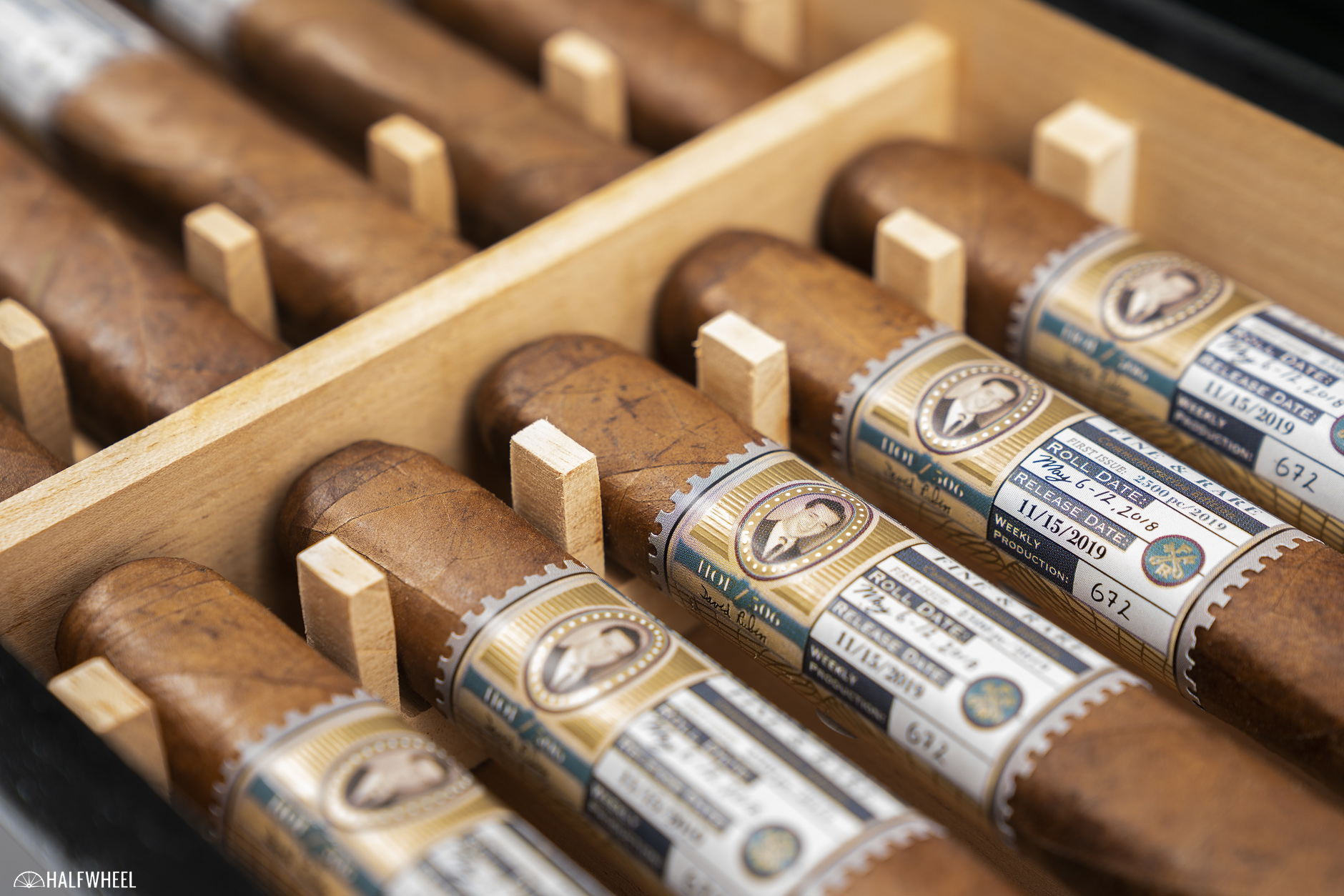 The cigar is a 6 1/4 x 54 box-pressed toro, the first time the Fine & Rare line used a box-pressed vitola, which Alan Rubin added as a tribute to his father. The blend features a wrapper from Honduras’ Trojes region, binders of undisclosed origin, and fillers that come from Honduras and Nicaragua. Like all Fine & Rare releases, it was made at the Raíces Cubana factory in Honduras. Production was limited to 2,500 boxes of 10 cigars, with individual cigars having an MSRP of $21.90.

Even nearly a decade since the launch of Fine & Rare, the idea of putting 10 types of tobacco seems to be a novel, intriguing, and possibly even dangerous idea, yet this version excels in doing so, quite possibly better than any of its predecessors. The flavor profile is rich and complex for most of the cigar, and even at its worst spots where the flavor is a bit irritating, still manages to deliver an enjoyable profile. There’s a well-planned progression of flavors, starting by checking the boxes of nearly every desirable flavor, then moving towards a more robust profile that at times shows the Honduran roots of the tobacco quite well. The finish brings things full circle in the best examples, hinting at it in the others. Other than a single cigar with combustion issues, the technical performance was nearly flawless and gave me little to complain about. A very enjoyable cigar and smoking experience, commanding the attention nearly every step of the way. 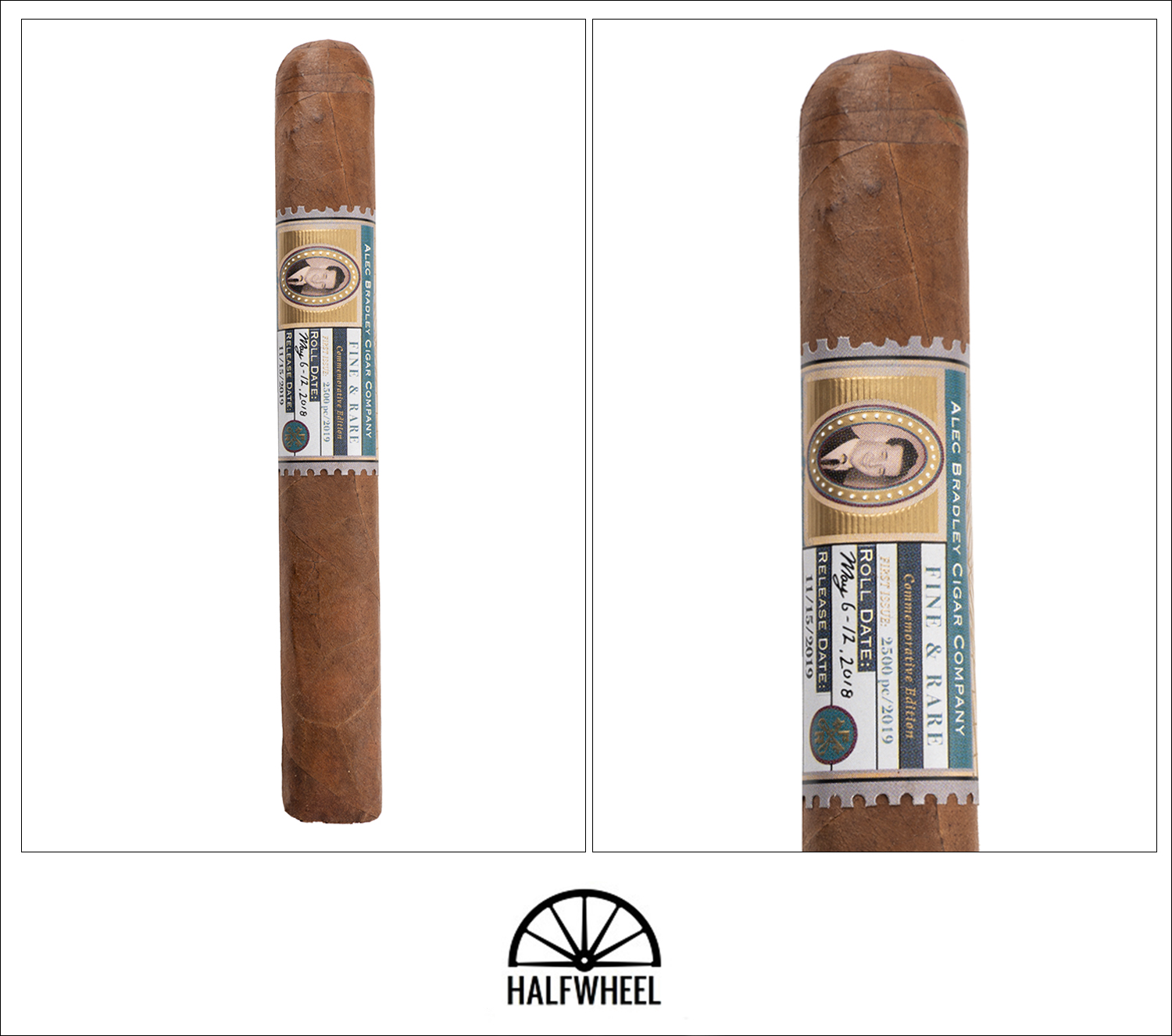 This particular sample wasn’t in cellophane when it went into my redux humidor, though I’m not exactly sure why that is, though as noted in the original review some of the cigars had glue marks on their cello and were even sticking together. Either way, it still looks good and shows the mottled brown wrapper color that it had two years ago. Color is generally consistent, though a particular spot on the backside of the cigar reveals some significant shade difference along a seam line. My notes don’t indicate this was a particularly oily wrapper, and it seems that’s still the case visually. It now feels a bit drier to the fingers, giving it some fine texture. Veins are small, thin and flat, meaning they neither contribute to the texture nor are they too visually distracting either. As for firmness, the cigar has some give both front-to-back and side-to-side but is still what I’d expect from a box-pressed cigar. The foot has a soft and engaging aroma that reminds me pizza or bread dough just about to go into the oven. It’s cool, slightly sweet but absolutely devoid of pepper until the very end of a firm sniff that results in a slight bit of tingle. The cold draw is incredibly smooth in terms of airflow, while the flavor has something that elicits a bit more of a physical reaction, though the flavor isn’t particularly identifiable. It’s not too far off from the dough flavor but has a touch of dry wood, almost cedar but not quite what I think of that flavor. The more draws I take, the more I find myself impressed by just how well-calibrated the draw is, a near-perfect resistance without any obstruction. I would be remiss in not mentioning the band as well, a stripped-down version compared to some previous years, and one that features the image of Alan Rubin’s father, David, to who this cigar is dedicated. The cut of the band reminds me a bit of the perforated edges of a postage stamp, but on a larger scale.

The Alec Bradley Fine & Rare HOF / 506 starts off fairly smooth, almost as if the dough from the pre-light experience has come out of the oven, which leads me to take a few hearty retrohales. The smoke is great through the nose, but doing so seems to quickly awaken the pepper that the cigar has to offer, with a decent amount of white pepper coming to life. While plenty potent, it still seems a bit sleepy and that it will have even more to offer as the cigar keeps burning. In the first half-inch, the ash is beginning to split as if it had been hit with a wood splitter, leading me to think that one half of that ash is going to drop off sooner than later. As for the flavor, there’s a bit more toast and a light black pepper standing out on the tongue while building creaminess coats it, but the real action is through the nose. Pepper has ticked up a bit as well, but where it really shines is in its long, lingering finish that tingles the nostrils. There’s a brief mellowing of the flavors as the creaminess becomes the lead flavor, but things come back with a good vengeance by way of a retrohale that is rich with black pepper. The burn line begins to get uneven and slightly jagged as the first third comes to a close but seems willing to be remedied with a quick touch-up. The march to the midway point brings about a thicker body to the smoke, while the retrohale picks up fresh-baked pretzel crust while the black pepper continues to evolve and is now a bit more pointed and intense. The first half sees an impressive build in flavor intensity from fairly mellow to a solid medium-plus, the body fills out to medium-plus, while strength feels like it’s just hitting medium.

The second half begins with two notable changes: the first is an increased earthiness in the flavor as the cigar is showing some of the soil and terroir of the regions from which the tobacco hails, while the aroma has become a bit more fragrant, exhibiting a light, almost marine cologne for a bit. The overall profile seems like it’s going to go the way of the flavor, picking up a bit of wood and campfire, before the first suggestions of some black coffee come along as the cigar approaches the final third. If the first third was on the relatively mellow side, the final third is on the other end of the scale, picking up more earthiness and a bit of rockiness, both of which give the puffs a more textured profile as they hit the tongue. The creaminess of the profile is largely gone, most noticeably in light of the aforementioned change, and each puff continues that streak. The cigar struggles with combustion a bit in the final third, as does the burn line when it comes to staying to staying even, but the experience is still enjoyable overall. Putting it down after about two and a half hours of smoking time, it seems that the Alec Bradley Fine & Rare HOF / 506 is a cigar of more pronounced changes rather than subtle moves, as the profile is in a much different place than where it started, and my memories of it are pretty clear about how it got from the first puff to the last.

While part of a series of cigars, the Alec Bradley Fine & Rare HOF / 506 has a touching story behind it, and for the most part the blend still does a very good job delivering an engaging profile. The first third is easily my favorite, as it shows the most nuance and seems to best live up to the billing of fine and rare. Where it stands now doesn't seem to be as quite as nuanced as where it was two years ago, though it still manages to hit the main points of the profile, just without as much finesse from point to point. Along those lines, the more subtle accents weren't as prevalent in this sample, which could just as easily be a byproduct of the limited sample size as it could be the time that has elapsed. If you've been sitting on these, you might want to fire one up sooner than later to make sure that the profile is in line with where you want it to be, but either way, it is still a pretty enjoyable smoke.