In 2011, Alec Bradley Cigar Co. launched an ambitious new line of cigars called Fine & Rare, centered around the idea of using 10 types of tobacco in a single cigar. It was a bit of a departure for the company as the cigars would come in highly-designed boxes and with a premium price tag, the kind that had previously not been territory in which the company had tread.

The series has been a consistent release since, and while the blends, shapes and prices have changed, the use of such a high number of tobaccos remained, as have the unconventional names that each cigar gets. It was seemingly on course to become a series like many others in the cigar industry, getting its annual release accompanied by the usual press release and excitement from retailers and consumers.

But in 2019, the release took on a special meaning. For the most recent edition, Alan Rubin, Alec Bradley’s founder, turned to a very special source of inspiration, his father, David, who had passed away in late 2018.

“My father brought joy to everyone around him,” said Rubin in a press release. “The only way I knew how to spread joy in his honor was through a cigar that was dedicated to him.”

Beyond being father and son, David and Alan Rubin had worked alongside each other since 1982, building a successful fastener business together. After the sale of that company, Alan started Alec Bradley Cigar Company while his father went into retirement, though it wasn’t long before he joined his son’s cigar company, helping with a number of tasks around the office.

It was also particularly touching as just like Alan Rubin joined his father in the family business, his sons, Alec and Bradley, had joined him in the cigar business, taking on increasing roles within the company as well as releasing two of their own cigars, Blind Faith and Gatekeeper.

As for the cigar, it is a 6 1/4 x 54 box-pressed toro, with the pressed cigar a first for the line, something that Rubin added as a tribute to his dad. The wrapper comes from the Trojes region of Honduras, while under that sit a combination of leaves from Honduras and Nicaragua. It is made at the Raíces Cubanas factory in Danlí, Honduras by a single pair of rollers.

The Alec Bradley Fine & Rare HOF / 506 began shipping to retailers in mid-November, just ahead of the one-year anniversary of David Rubin’s passing. Even though the Alec Bradley Fine & Rare HOF / 506 looks like a fairly standard cigar, there’s a lot to take in, most notably all of the details on the band. Fans of the line will recognize some changes to it, notably the addition of the photo of David Rubin, which occupies about a third of the band’s front side. Gone are things like the rollers’ and supervisor’s names and signatures, as well as those of Alan Rubin and Ralph Montero. The rolling dates remain, as does the weekly production number and release date. It’s a bit of a change, but it doesn’t completely depart from the path set by previous releases. The cigar itself is a fine-looking specimen, almost the color of peanut butter with a slightly mottled and matte finish. There’s a bit of oil to be found with the fingers, but not enough to be considered a glossy leaf. Some veins catch the eye even if they are nothing out of the ordinary in size or quantity. From a visual perspective, things look solid and when squeezed it has the familiar pillowy firmness that is common to box pressed cigars, showing some give but not enough to compress it very far. Aroma off the foot of the cigar is cool, a bit oily and slightly sweet, reminding me in a different way of peanut butter with the occasional hint of very light woods. The cold draw on the first cigar is open and doesn’t lead me to think of peanut butter, rather a somewhat more herbal drink, almost a gin-and-floral combination I might expect from a cocktail. There’s a bit of light white pepper, but nothing that reaches out and commands the palate. The other two samples have a firmer draw and don’t repeat that flavor, instead it’s on par with the aroma if more wood forward.

The first puffs of the Alec Bradley Fine & Rare HOF / 506 are definitely unique, offering a mix of flavors that has my mind jumping from spot to spot to jot down the individual components, while thinking it might be challenging to give them all a collective description. There’s a bit of a floral sensation early on, leading me back to the cocktail comparison, though the gin doesn’t come across as prominently. A bit of black pepper emerges before my puff count reaches double digits and steps into the lead component while also pushing most of the initial flavors well into the background. There’s a bit of a generic gum sweetness here; were I to chew gum with any regularity I’d have a better term for it, rather it reminds me of the convenience store standards like Wrigley’s and Dentyne. The cigar is putting out enough smoke in the first inch that I feel compelled to make not of it, maybe not car fire levels, but certainly more than enough. That smoke has picked up a bit of a condensed milk sweetness to it, and it’s also remarkably smooth, even as it leaves a bit of black pepper tingle on the tongue. The final puffs of this section sees the black pepper intensify, bringing the flavor to medium-plus while body and strength are closer to medium. Technical performance has generally been excellent. Ever since getting hold of the profile, the black pepper has refused to yield the spotlight, but supporting notes of dry wood are beginning to creep in not long into the second third. It’s an interesting if not completely unexpected turn for the Alec Bradley Fine & Rare HOF / 506, though it does have me thinking back fondly on the first third. There’s a continuing trend of the smoke getting a bit rougher as the burn line approaches the midway point; not harsh, but simply a bit more pointed in its approach and a distinct difference from where it was in the first third. Retrohales are also becoming more pointed, as the white pepper sharpens up and becomes more focused on what feels like individual olfactory nerves as opposed to the sense of smell in general. Other than some combustion issues with one sample, the cigar burns very well, with an even burn line and still more than abundant smoke production. The second third wraps at a medium-full level across the board. 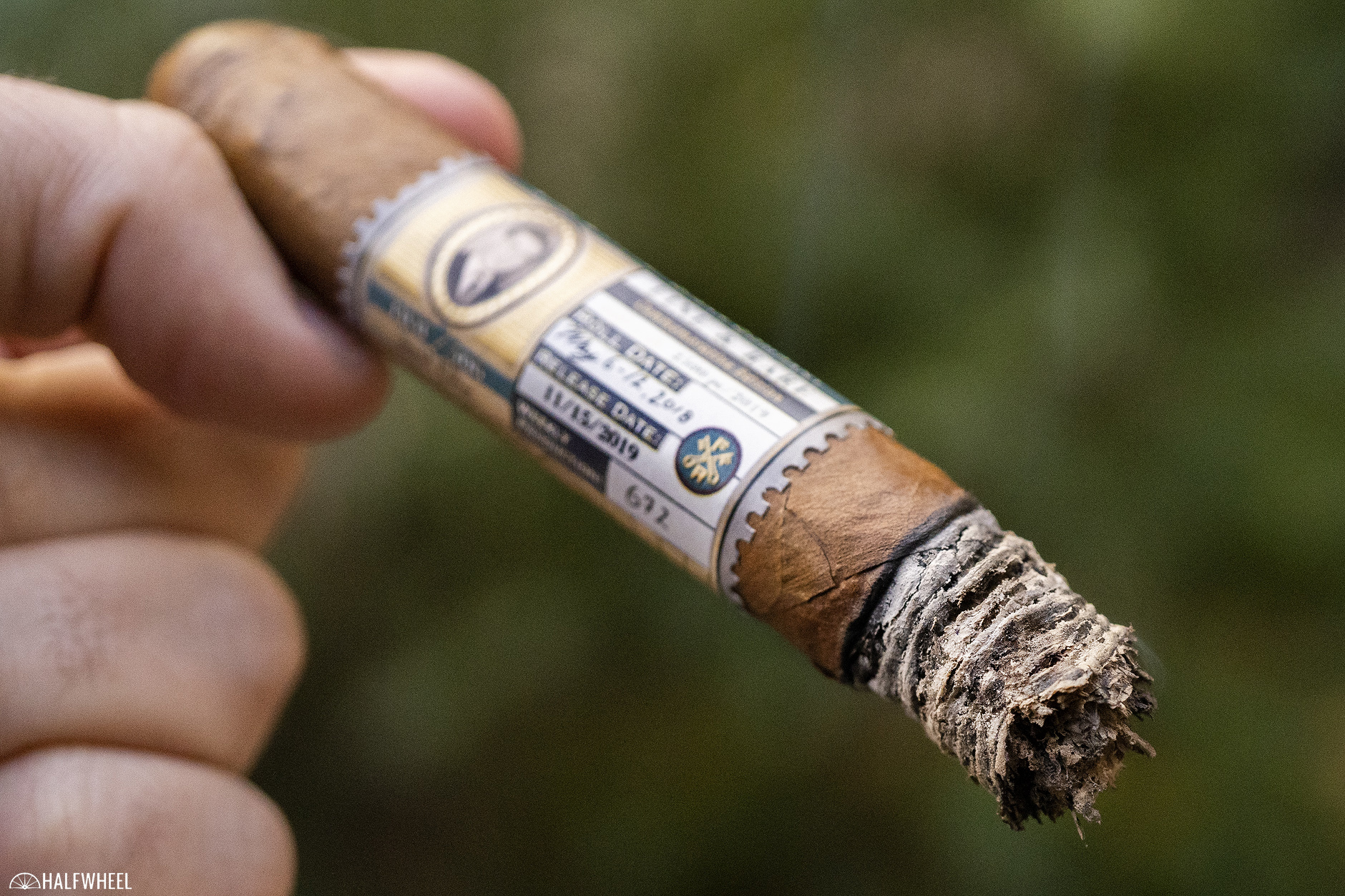 The profile at the start of the final third of the Alec Bradley Fine & Rare HOF / 506 is about the driest that it has been, and while my throat isn’t feeling quite as scratched, it’s still a bit irritated. Yet at the same time, the flavors are enjoyable: more woods, some peanut and a bit of black pepper come together well on the tongue, though almost certainly begging to be paired with a beverage to smooth over its tracks. Meanwhile, white pepper is almost the only thing I pick up on retrohales, bright, clear and effective in terms of stimulating that sense. Halfway through there is a new earthy terroir flavor that screams Honduras, particularly recognizable if its somewhat dusty profile is one imprinted in your memory like it is for me. That change also brings about a slightly lighter profile, though I’d be hesitant to push if off the medium-full mark. There’s a bit more creaminess and its related sweetness, as well as just a touch of vanilla, making for arguably the most complex, deep and enjoyable profile that the cigar has put forth since the first inch. The smoke gets more irritating to the eyes in the final two inches, almost as if the black pepper had deemed its work done on the taste buds and olfactory nerves and needed another of the five senses for fodder. Even nearly a decade since the launch of Fine & Rare, the idea of putting 10 types of tobacco seems to be a novel, intriguing, and possibly even dangerous idea, yet this version excels in doing so, quite possibly better than any of its predecessors. The flavor profile is rich and complex for most of the cigar, and even at its worst spots where the flavor is a bit irritating, still manages to deliver an enjoyable profile. There's a well-planned progression of flavors, starting by checking the boxes of nearly every desirable flavor, then moving towards a more robust profile that at times shows the Honduran roots of the tobacco quite well. The finish brings things full circle in the best examples, hinting at it in the others. Other than a single cigar with combustion issues, the technical performance was nearly flawless and gave me little to complain about. A very enjoyable cigar and smoking experience, commanding the attention nearly every step of the way.