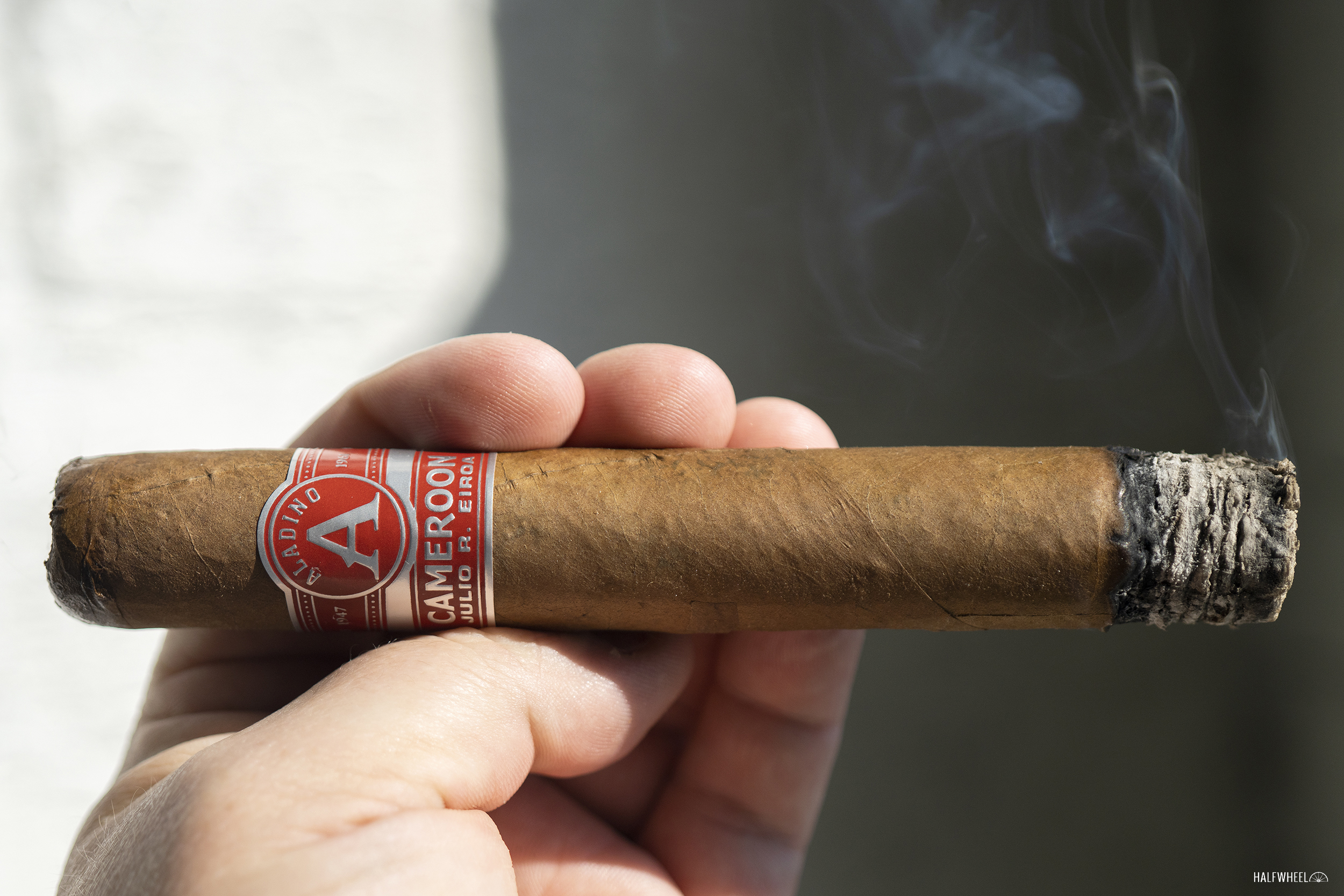 In May 2020, JRE Tobacco Co. launched a line named Aladino Cameroon, which—as the name suggests—focused on a Cameroon wrapper grown, though not a typical wrapper from Cameroon. Instead, it was a Cameroon-seed wrapper grown by the Eiroa family in Honduras. The entirety of the blend is made up of Honduran tobaccos as the fillers consist corojo-seed tobaccos.

Tom Poehler—who is a sales representative for both JRE and previously was one for the Eiroa-owned Camacho—described the events that led to the creation of the Aladino Cameroon blend to Patrick Lagreid in June 2020:

The brand debuted with three different sizes, all of which are regular production releases: a 5 x 50 Robusto, a 6 x 43 Lonsdale and a 6 x 52 Super Toro. However, a 7 x 38 Lancero was added to the line later that same year, while the 4 1/2 x 48 Rothschild was released as an exclusive to Kentucky-based store The Party Source.

Earlier this summer, JRE announced it was releasing not one, but two new sizes in the Aladino Cameroon line: the 6 1/2 x 60 Gordo and the 5 1/4 x 46 Queens Perfecto. Both are regular production, nationally available sizes, bringing the total number of regular vitolas for the line to six.

There are currently seven different vitolas in the Aladino Cameroon line:

The Aladino Cameroon Gordo is produced at Fábrica de Puros Aladino at Las Lomas Jamastran in Honduras and boxes started shipping to retailers in July. 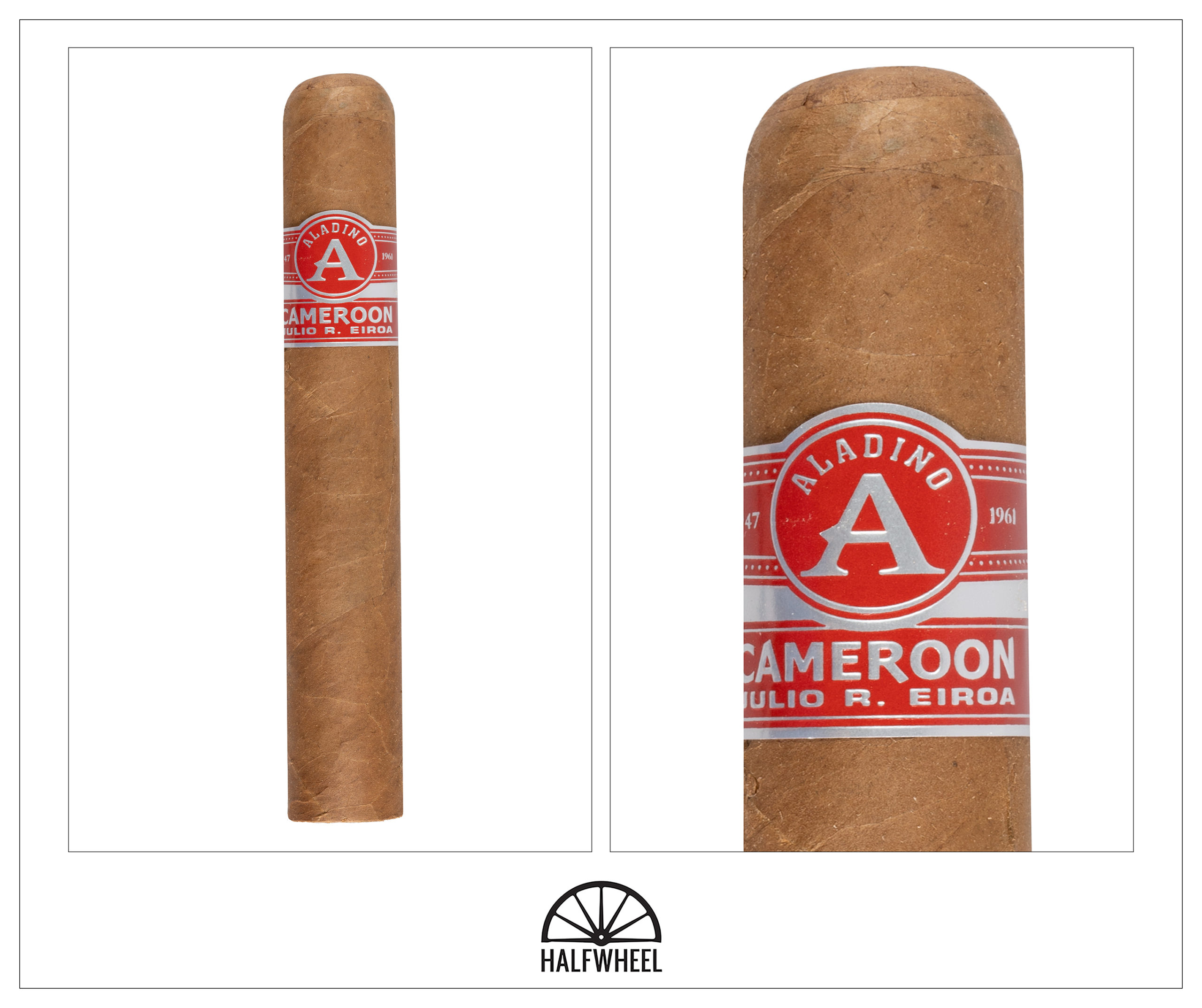 Covered in a rustic-looking, reddish-chocolate brown wrapper that is relatively smooth to the touch, the Aladino Cameroon Gordo is both large and heavy in my hand. There is a bit of oil present as well as a number of overt veins running up and down the length of all three cigars, but after a visual inspection, I find what looks to be a patch on my first cigar. The aroma coming from the wrapper reminds me of sweet wood, dank earth, generic nuts and creamy leather, with a slight undertone of bitter dark chocolate. However, the foot is anything but restrained, with notes of gingerbread, milk chocolate, barnyard, stale bread and banana sweetness each making themselves known. Finally, a straight cut reveals a cold draw full of vegetal notes, peanut shells, sweet hay, gritty earth, nutmeg and mineral saltiness along with more of that banana sweetness from the foot.

Starting out, the Aladino Cameroon Gordo features light coffee and leather notes, along with a touch of spice on my tongue. However, the profile changes fairly quickly, with sourdough bread and hay becoming the main flavors, followed by powdery cocoa nibs, earth, lemongrass and peanuts, along with some light herbal notes. There is also quite a bit going on when it comes to the retrohale, which features not only some distinct—but not overpowering—red pepper and also a decent amount of brown sugar sweetness that seems to get slightly stronger as the first third burns down. Flavor is just below medium, but the body and strength end the first third firmly between the mild and medium marks. In terms of construction, draws are excellent after straight cuts, smoke is thick and plentiful and the burn lines on all three cigars give me no issues whatsoever.

Peanuts and sourdough bread take over the top spots in the profile during the second third of the cigar, easily outpacing additional flavors of dried tea leaves, dark chocolate, creamy hay, nutmeg, earth, cedar and a touch of floral. The amount of red pepper on the retrohale is holding steady, but the brown sugar sweetness has increased slightly, as has the amount of mineral saltiness on my lips. Flavor bumps up to medium-full, body is just under medium and the strength has increased to land firmly in the medium range. Construction-wise, both the draw and the burn continue to impress on all three cigars, but the burn runs into issues on two cigars, with one needing a single correction and the other needing help two separate times to stay on track. While there is a bit less sweetness in the Aladino during the final third, the profile becomes a bit creamier overall, with a creamy cedar note joining the peanut flavor at the top of the profile. However, the sourdough bread flavor remains in the background with other secondary notes of dark chocolate, roasted espresso beans, hay, earth, nutmeg and tea leaves along with a touch of floral. In addition to the slight decrease in brown sugar sweetness on the retrohale, there is also a bit more red pepper, while the mineral saltiness on my lips seems unchanged. Flavor remains at medium-full, body has increased to a solid medium and the strength increases to medium-plus. Finally, the construction on all three cigars is spectacular with the burn, draw and smoke production working in harmony with each other. 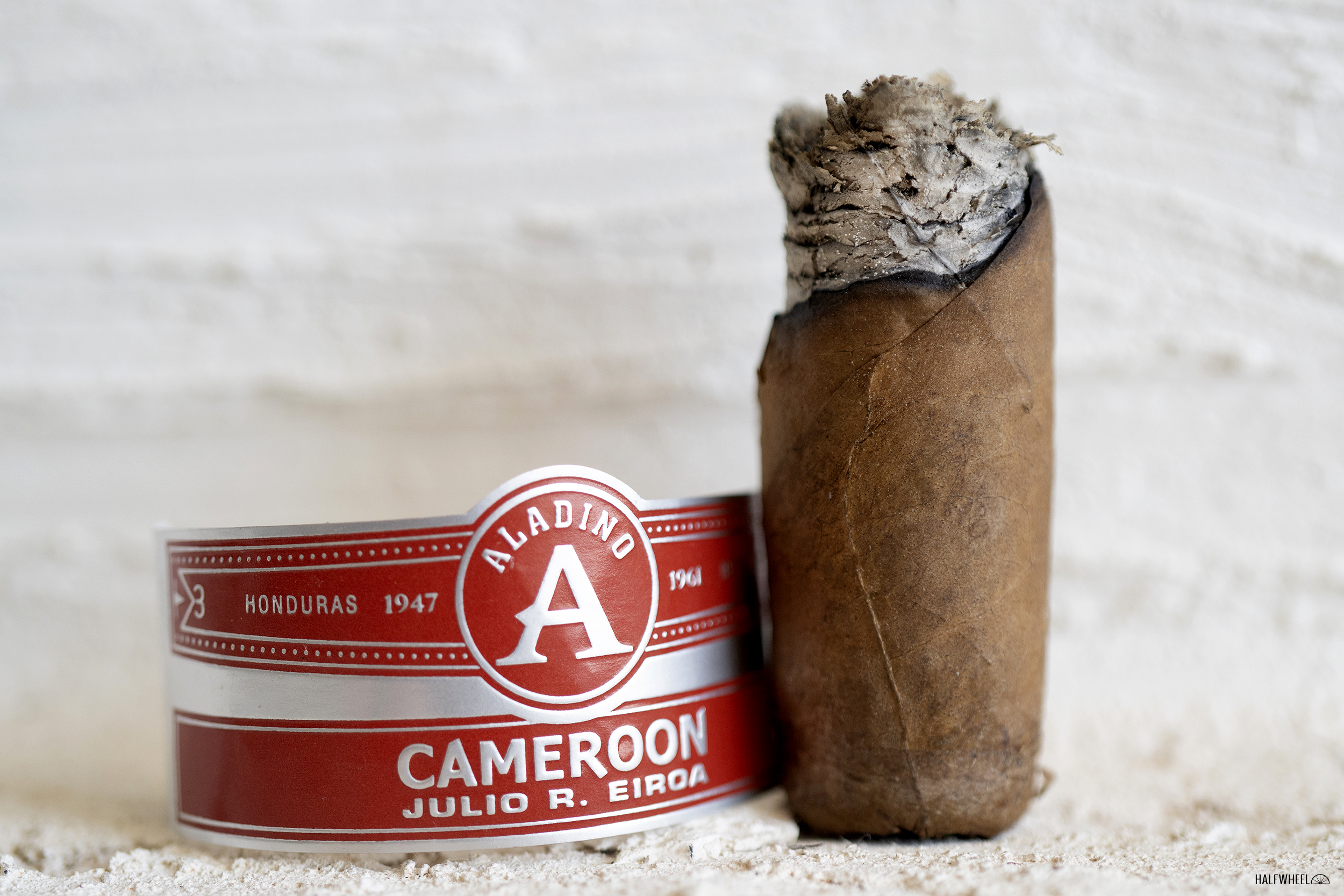 After smoking my first Aladino Cameroon Lancero, I loved it so much I went out and bought box of them for myself, something that does not happen very often at all. Although it is not quite on that level, the Gordo is a very, very good cigar due to the profile full of sourdough bread, hay, peanuts and cedar combined with brown sugar sweetness and red pepper on the retrohale. Construction was excellent overall and while the medium-full strength was a bit of a surprise, it is well-integrated with the rest of the profile. In the end, the Aladino Cameroon Gordo is not only a great addition to the company’s lineup but also one of the better cigars I have smoked from the company and well worth taking the time to track down for yourself.