I’ve been to at least 40 different tobacco growing operations. Like anything in nature, each one is a bit different. None of them have been as different as Finca Corojo, the 700-acre farm owned by Julio Eiroa.

I spent two days touring the operation with Justo Eiroa, Julio’s son and president of JRE. Most of our time was spent at the farm. And that makes sense.

Eiroa turned 80 shortly before I arrived in eastern Honduras, right along the Nicaraguan border. But as is often the case with this ilk of Cuban farmers, he was up at 5 a.m. each day, working well before I had even contemplated opening my eyes. Any visit to the farm starts with cleaning. The car is cleaned, your clothes are cleaned through a mist tunnel and your hands washed. Each and every time. The farm has had a partnership with Bayer CropScience since 2010. As such, there are numerous procedures and policies in place. Some—like cleaning your feet before entering the greenhouses that hold seedbeds—aren’t particularly different.

Others, like the mist tunnels and car cleaning, are not the norm. What’s perhaps most notable is not the procedure, but the policy. At many farms and factories, visitors—particularly gringo visitors—seem to be exempt from certain activities, like cleaning your shoes. That’s not the case here and you can tell that’s never been the case. 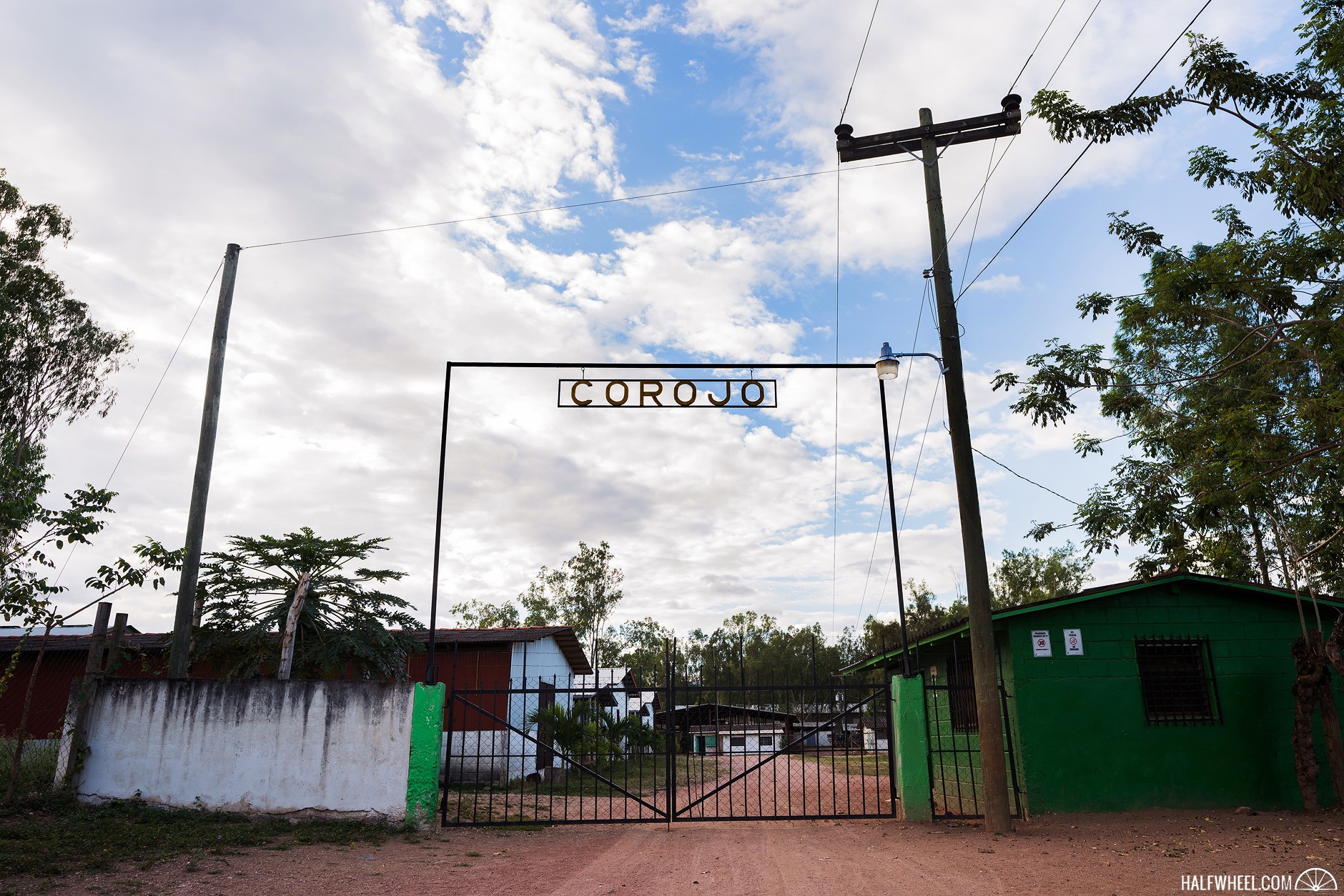 The entry way to the massive Finca Corojo. Every vehicle that enters the farm is sprayed down, each and every time. This is part of the farm’s partnership with Bayer. The goal is to reduce the amount of contaminants introduced to the farm, thereby reducing the amount of chemicals used on the tobacco. Before entering the seed beds, everyone is required to clean their shoes in these trays. We were required to do this each and every time, sometimes doing it just two minutes apart. 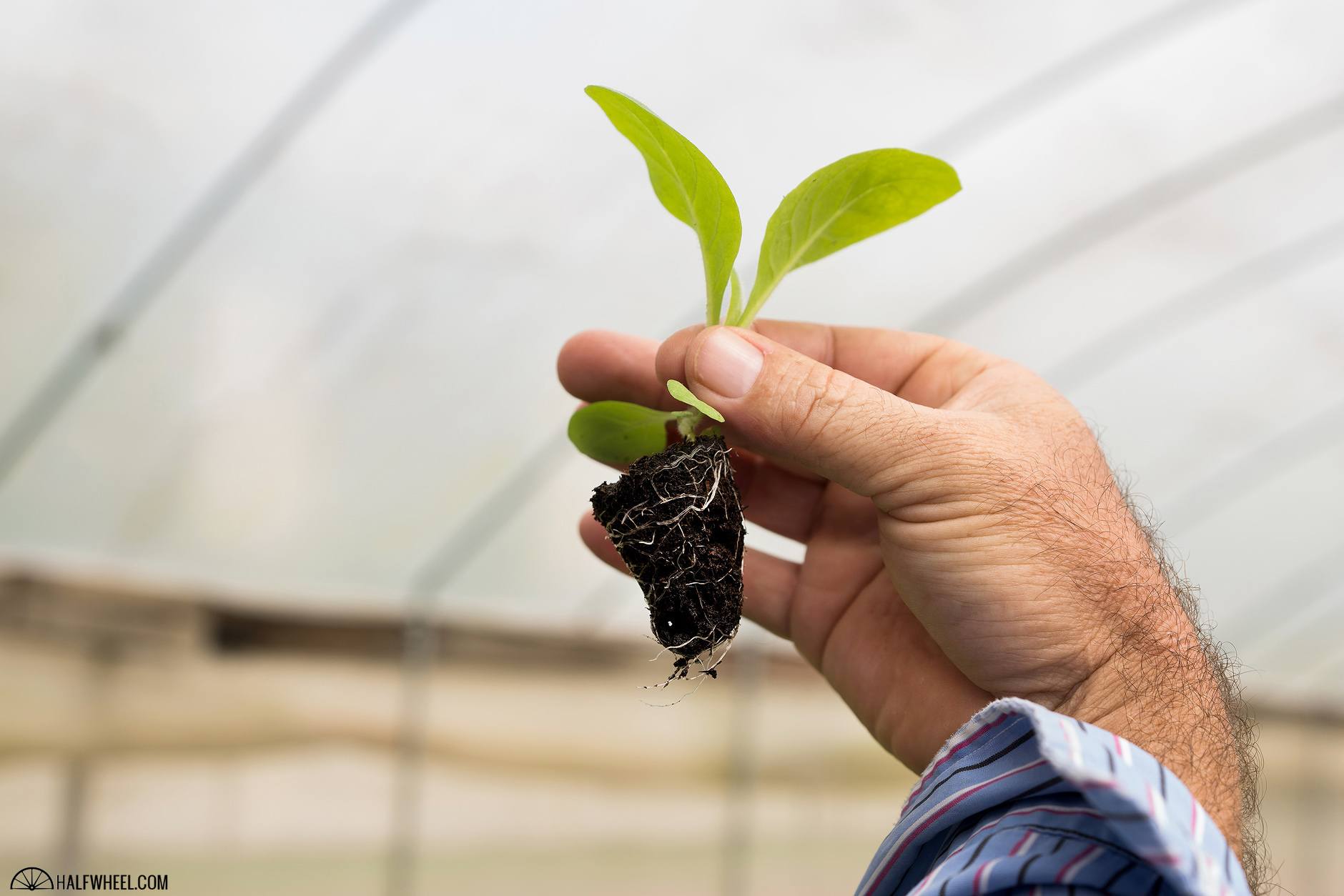 A tobacco seedling out of the bed. These will continue in the greenhouse for a few more days before the strongest plant is pulled and placed into the field. 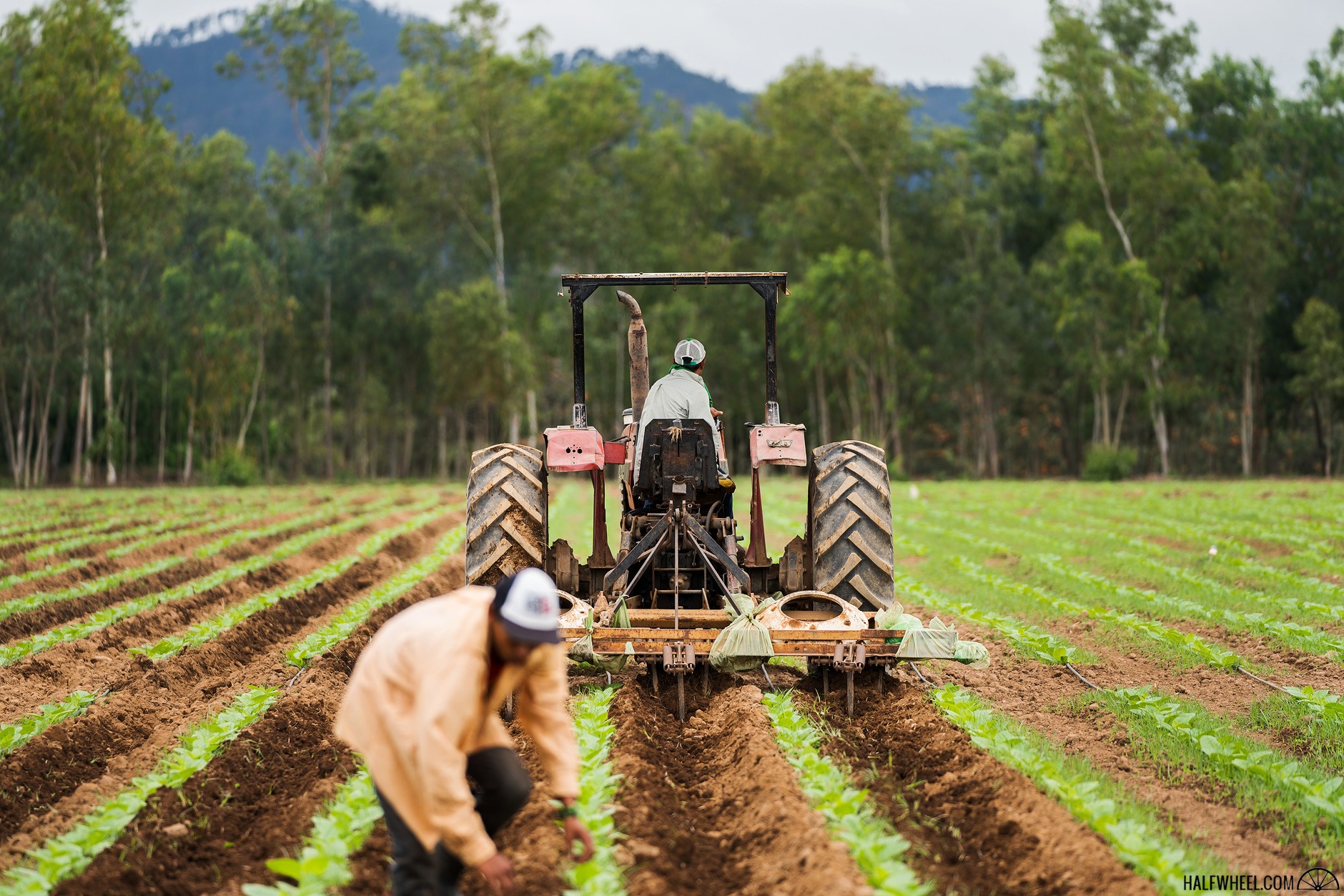 Tractors run down the fields while workers follow behind making sure any debris is removed. The company still uses chemicals, but claims they are the least aggressive. Here the chemicals are being loaded into leaf blowers. 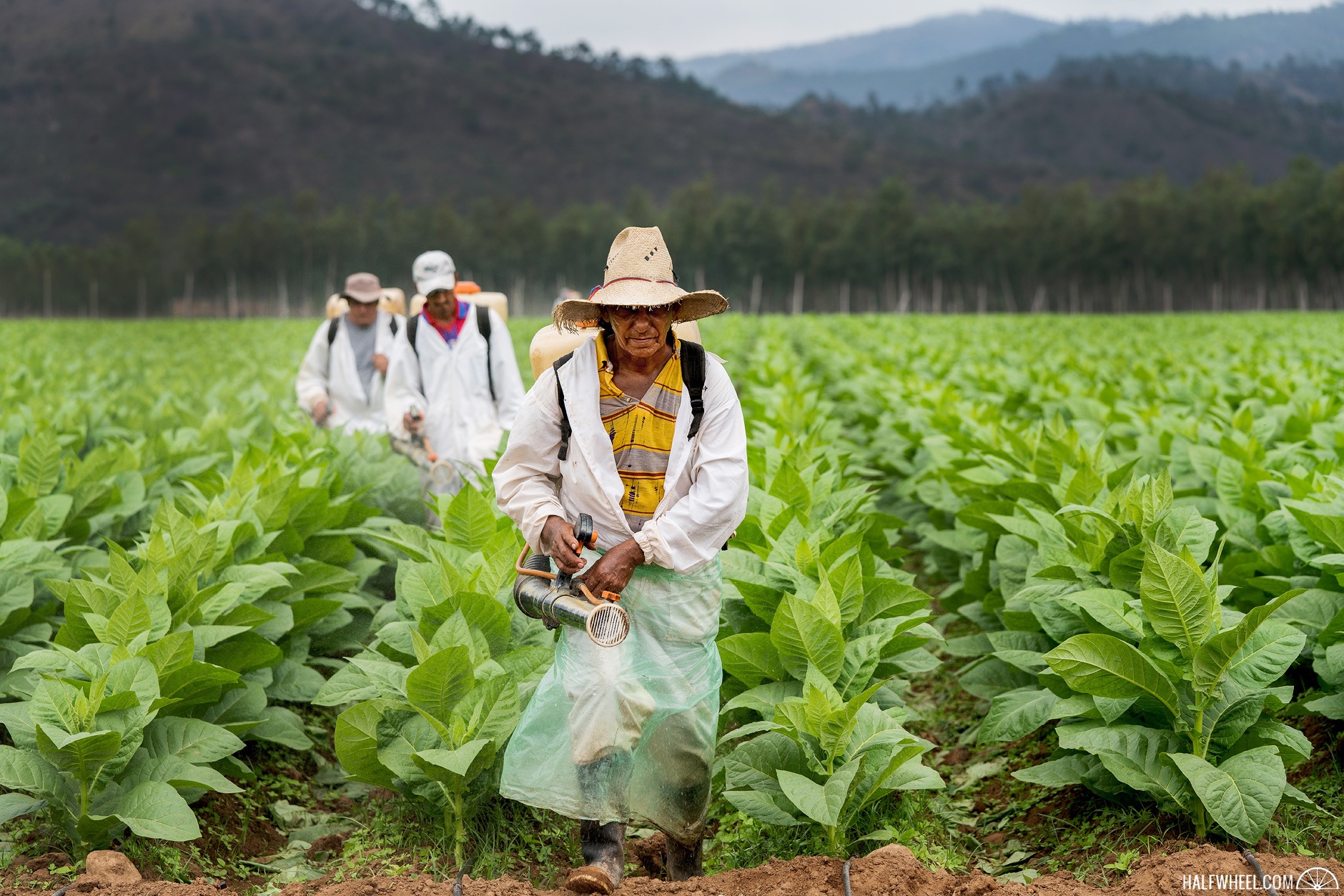 A team of men walks down the field distributing the chemicals out of the leaf blowers. 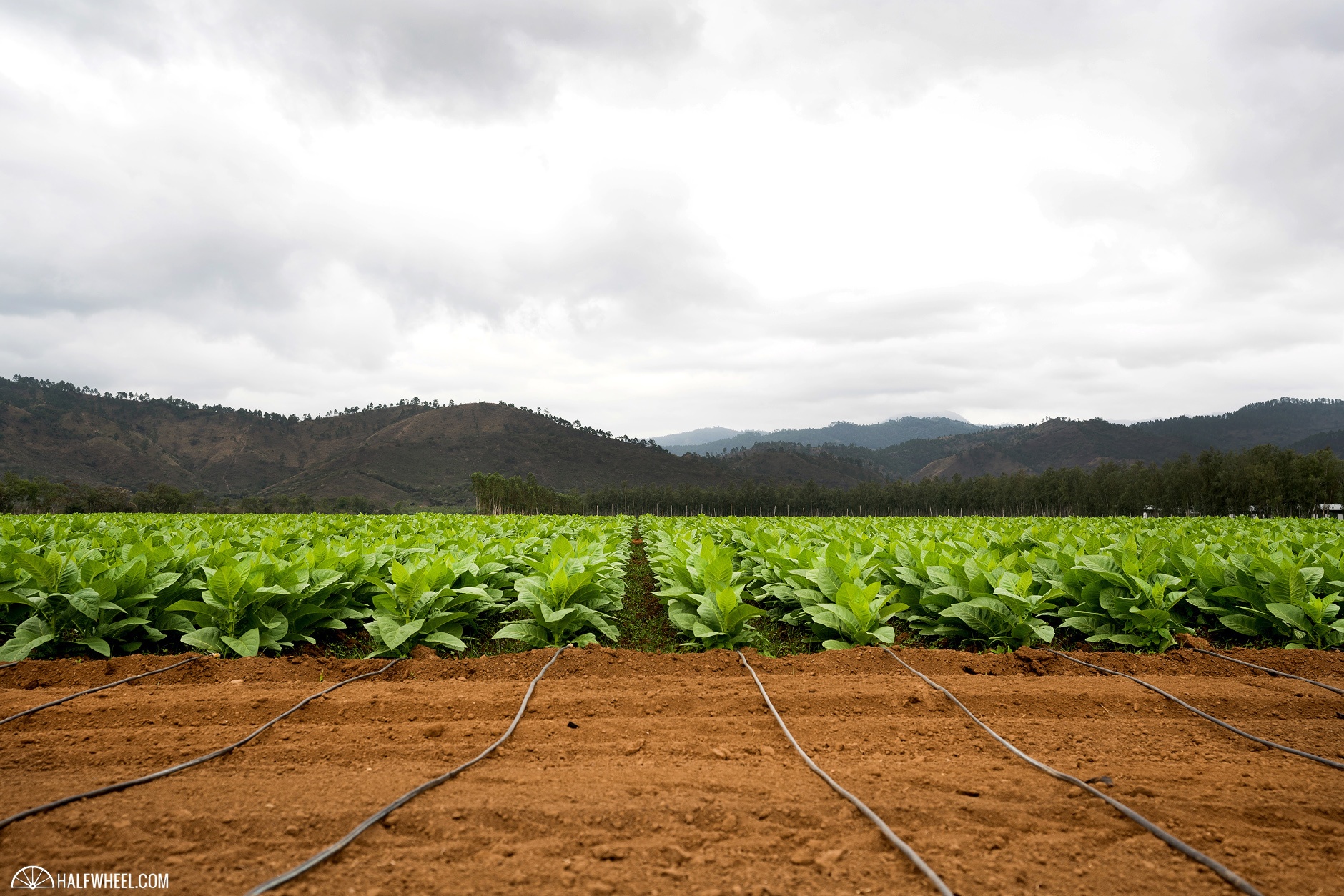 When the tobacco plants are this young, you can see in between the rows essentially as far as the eye—or my lens—can see. Rows of men continue the cleaning process, making sure the tobacco can grow with maximum efficiency. These signs are everywhere, reminding workers of the procedures in place. The oldest barn on the property, built in 1962 by the Cuban Tabacco institute and Banco de Fomento. An old Ford tractor. A machine shop is located on the farm. 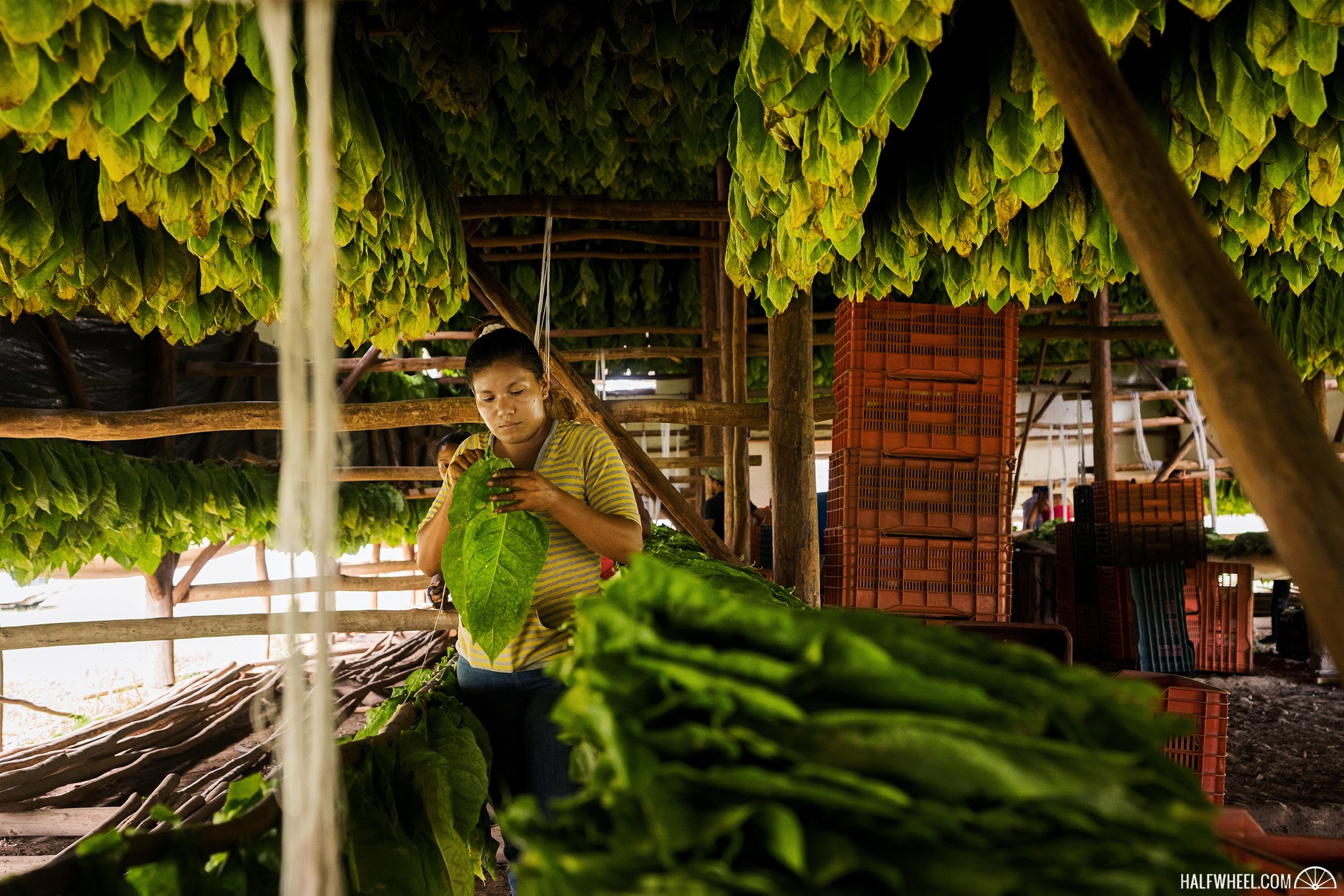 Leaves are individually sown by hand before being hung. Tobacco hangs in the barns, nearly ready to be moved into sorting and pilones. The last bit of green leaves the tobacco plants.

One of the most unique parts of Finca Corojo is that it’s more than just a tobacco farm. In the middle is the sorghum drying area flanked on both sides by tobacco barns. The company is growing 180 acres of sorghum—12,300 bushels—with plans to double it. This is sold to Cargill and used for animal feed. 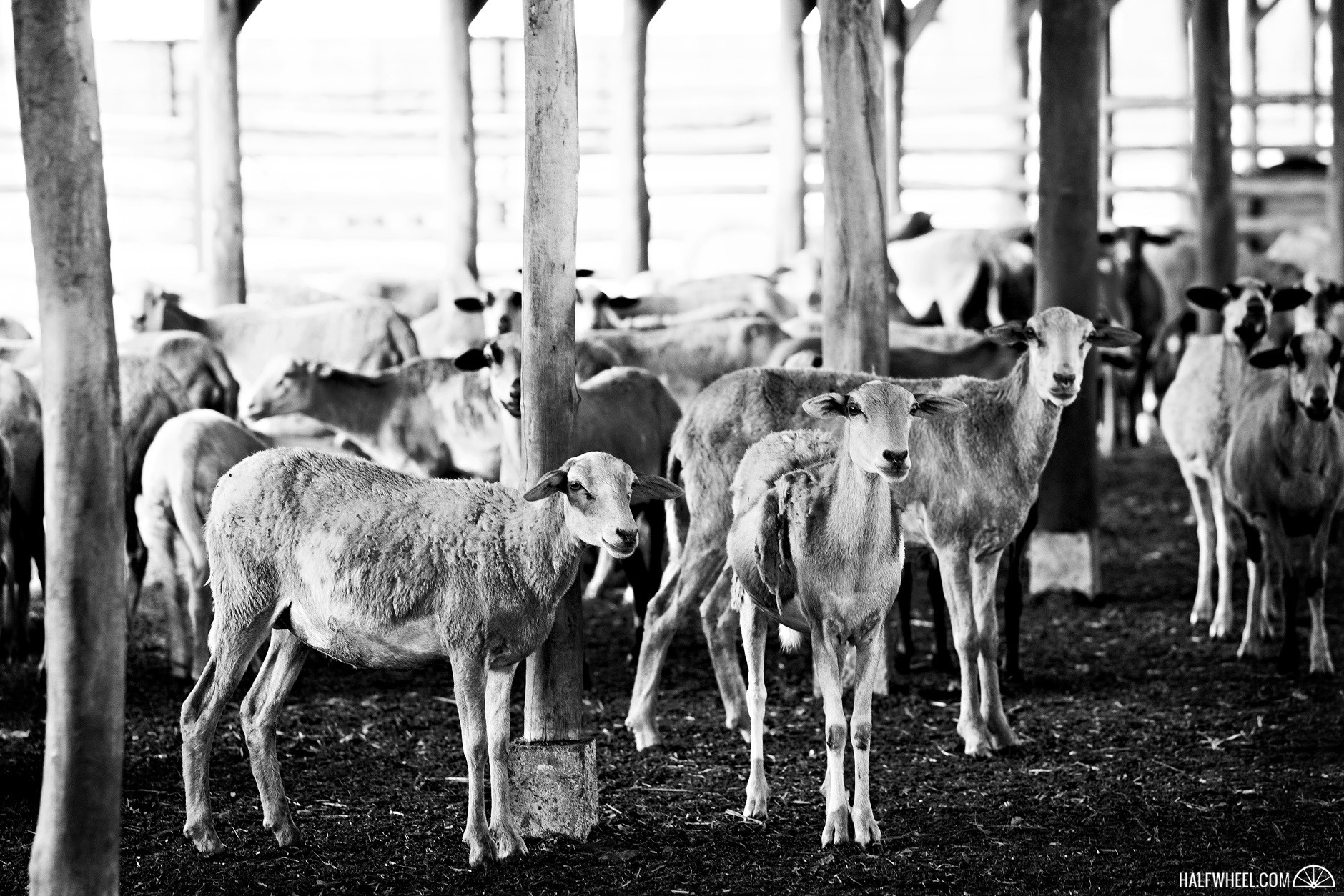 Raising sheep is a relatively new addition to the farm. Eiroa plans to triple his herd in a year. The farm is located on the mountainside, strategically placed to receive the water running down from the mountains.

The farm is a 700-acre property—400 of which have access to drip irrigation—with 53 tobacco barns, 180 acres of sorghum, eucalyptus trees, sheep and horses. Finca Corojo isn’t simply a tobacco farm, it’s an actual farm. There are plans to increase all of the individual agricultural product’s outputs, as well as a pilot program for red beans. The centerpiece is certainly the tobacco, which the company plans to begin selling now that a purchasing agreement with Davidoff has ended. 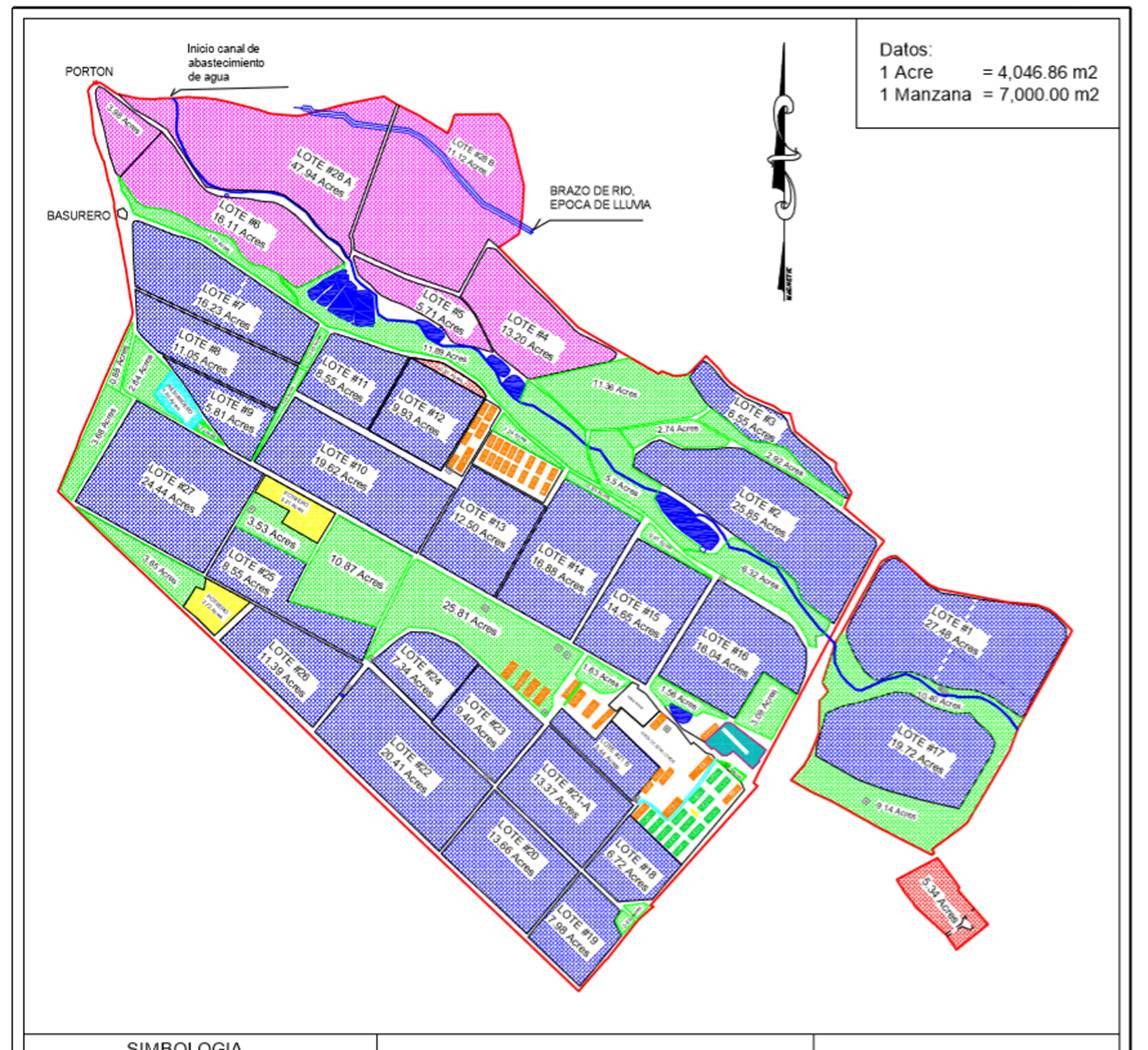 Justo Eiroa made it clear repetitively, the goal is to be known as the premier tobacco grower.

Still—like just about every major tobacco grower—the Eiroas believe that having their own brand and factory is key for the long-term success of the family’s operations. 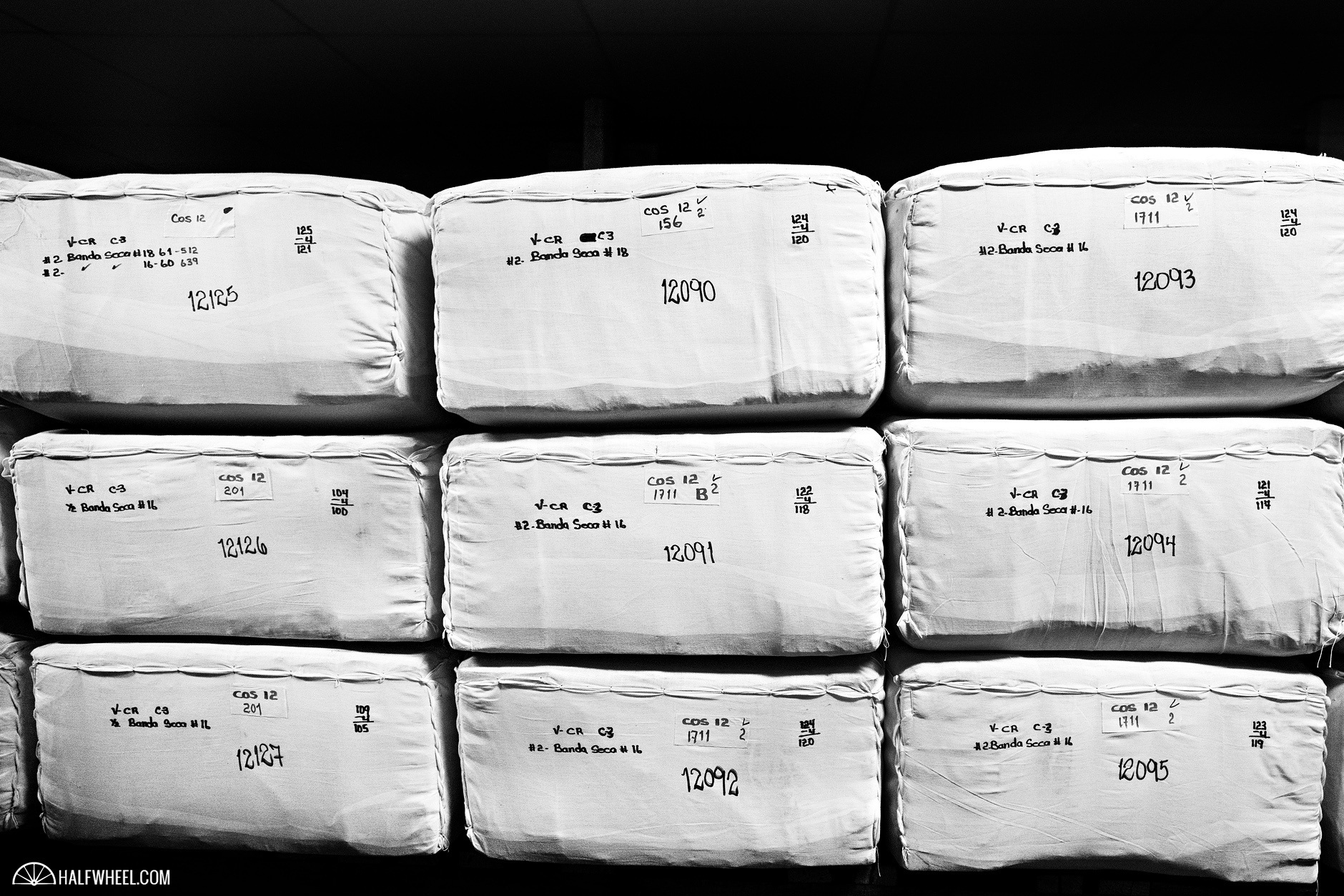 The tour was oddly one of the few that went chronically step-by-step in the cigarmaking process and that meant we eventually ventured to the tobacco processing operations to see sorting, curing and storage.

I’ve actually now been to three factories in the last few weeks that use these unique wheels. They were developed by Eiroa is a more efficient way to dry tobacco. Instead of having workers individually shake the hands of tobacco—a group of leaves—they are placed on the wheel which is spun around. This not only improves the overall time that is used but perhaps, more importantly, reduces the risk of breakage.

There were a few other parts of the process that are unique: the Eiroas do sorting fairly early on in the process compared to many other places. But if there’s one thing that stands out from the experience, it’s the wheels and they also make for the best video.

A look down the box factory.

This is the first box factory I’ve visited that required both hats and masks. Safety glasses were also encouraged for visitors.

The outside of the Las Lomas factory, which opened in 2015.

Cigar presses sit on the rolling tables. This isn’t particularly common, most factories have presses on the floor—usually to the side of the rolling tables—or in between the tables. Cigars are placed in these presses after they are bunched, before wrapper is applied. This is what gives a cigar its uniform cylindrical shape.

A worker applies bands to a new private label for Arizona-based Cigar King.

A gigantic humidor sits in Julio Eiroa’s office. The humidor also contains storage for wine and liquor bottles. It’s so big, it has a spinning base. And yes—that is a piece of tobacco in the top lefthand corner. It’s more than just show as it helps to tell humidity.

It’s a gigantic humidor on wheels. It did not fit in my suitcase.

From there, it’s off to the box factory. There are box factories and then there’s what General Cigar Dominicana and Tabacalera de García have. This is the former. It’s impressive and always a great reminder of how much work goes into cigars, even the parts we throw out, but it’s not much different from many other box factories.

One of the shortest visits was the cigar factory itself. Las Lomas makes cigars for JRE. Christian Eiroa—one of Julio’s other sons—makes cigars at his own factory in Danlí as well as in Nicaragua.  As such, Las Lomas is quite small since its one client—JRE—is quite new.

The Las Lomas factory is on the Camp Aladino property, a sprawling jungle retreat that is best known by its former name, Camp Camacho. At the top is Julio’s house and the hospitality area, below that are the rooms where I stayed and as you go further the list of buildings and wildlife grows, including tobacco sorting and storage, a machine shop, quail cages, a doctor’s office, chickens, wild deer and the aforementioned box factory and cigar factory.

Las Lomas is very small, just 14 pairs at the moment, though plenty of room to increase that number to 100. Justo said the factory is hoping to attract new clients, though the ultimate goal seems to be to sell tobacco to other people.

Much of the time at the factory was spent with the other tour guests—two sales representatives and three retailers—giving solicited advice to Julio Eiroa in the only area where any of us might have been qualified: packaging. It was somewhat of an ironic ending given the overarching theme of the overall visit was about tobacco and its importance, particularly the in rawest of form.

Disclosure: JRE Tobacco Co. paid for my travel and accommodations in Honduras.