Hamaki is the Japanese word for cigar.

It was only a matter of time before it found its way onto a cigar, and Andre Farkas, who seems to be on somewhat of a Japanese kick of late, provided that opportunity with a new release that shipped last month.

The Viaje Hamaki is a 6 x 54 box-pressed torpedo, but the big news for long-time Viaje smokers is that the cigar is a Dominican puro.  It comes by way of Quesada Cigars, which produced last year’s Juntos release.

While the Hamaki wears a WLP (White Label Project) band, it appears to be only temporary, as a company spokesperson told halfwheel that the packaging will change on future releases and it will become its own “proper line.” 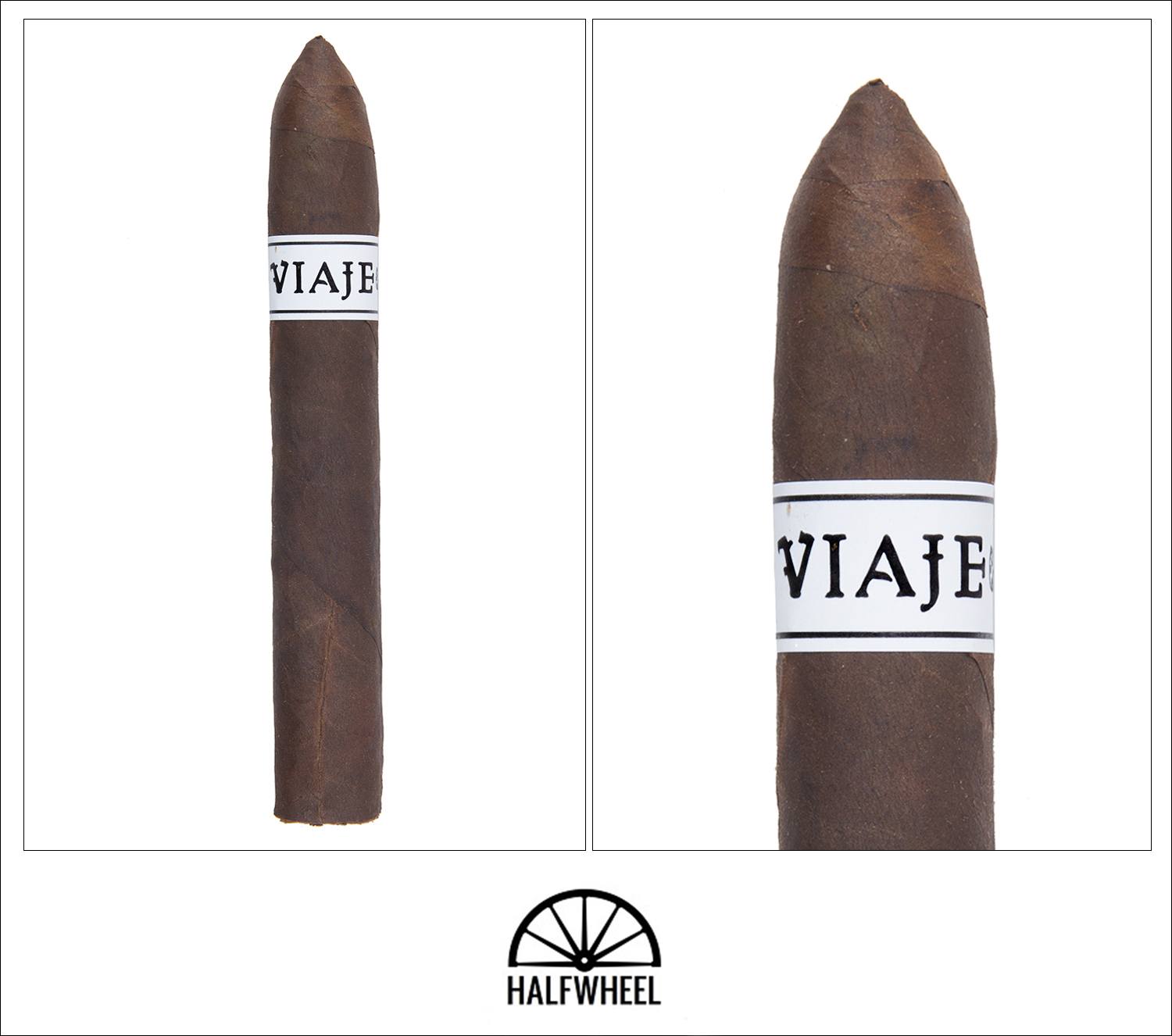 The Hamaki reminds me of the Guáimaro with the dark wrapper, simple black on white band, and the fact that the letters aren’t all visible on the band, which admittedly looks a bit odd. The wrapper is toasty with chocolate, some acidity and barnyard at the medium-plus levels. It’s much sweeter on the foot with chocolate ice cream and some mild cherries—medium-full, very sweet, but a bit simplistic. The cold draw has a similar chocolate sweetness, along with some nutmeg and a bit of white pepper on the tongue. I notice the draw is a bit open on each sample, though not way too open like the Cornelius & Anthony I recently reviewed.

It starts very woody with some sweetness and red pepper around the medium-plus level. The first sample struggles a bit to stay lit immediately after the first puff, so I pay special attention to the second and third cigars. Even after nearly 30 seconds of toasting the foot, I still needed to pick my lighter back up and pay special attention to about 30 percent of the cigar, which seemed to not want to burn. Flavor-wise, the first third is enjoyable with some grapefruit paired with earthiness and woody flavors in the mouth, while a creamy cedar and sunflower seed mixture is in the retrohale. There are touches of vegetal flavors on the finish, but they are largely washed out by a big cinnamon note that covers the tip of the tongue. The first Hamaki manages to go through the first third without a touch-up, albeit with some really ugly ash, but the other two samples unfortunately see the lighter used multiple times with the third sample being the worst offender. Whatever hope there was of the Hamaki burning well is gone by the midpoint of each sample. The first sample, i.e. the one that didn’t get a touch-up in the first third, gets touched up three times and one purge, something that seems to be caused by the left side of the cigar not wanting to burn. The other two samples are worse, much worse in fact. The third sample gets to a point where I find myself relighting the cigar every five or six minutes despite a massively increased puff rate. If a single relight changes the flavor of a cigar, constant relights are the equivalent of taking your entire meal to go, putting it in the freezer, then a blender, and then microwaving it. There is some semblance of what this cigar tastes like, but this isn’t really what it’s supposed to taste like, so I’m not sure how helpful the tasting notes are going to be, but the cigar is earthy with a strong pepper. Through the nose, I get a predictable amount of toastiness, Lay’s potato chips and paprika. Flavor remains medium-full, body is full, albeit declining, and strength is medium. The short of it is the Hamaki’s burn issues don’t get better. Flavor-wise, it gets more and more generic with the earthy and toasty mixture overtaking most of the complexities. There’s some creaminess and grains through the nose, but it’s largely toasty and getting somewhat harsh. The flavor is not bad in the sense that I would stop smoking it if there weren’t burn issues, but there are, and they aren’t getting better. 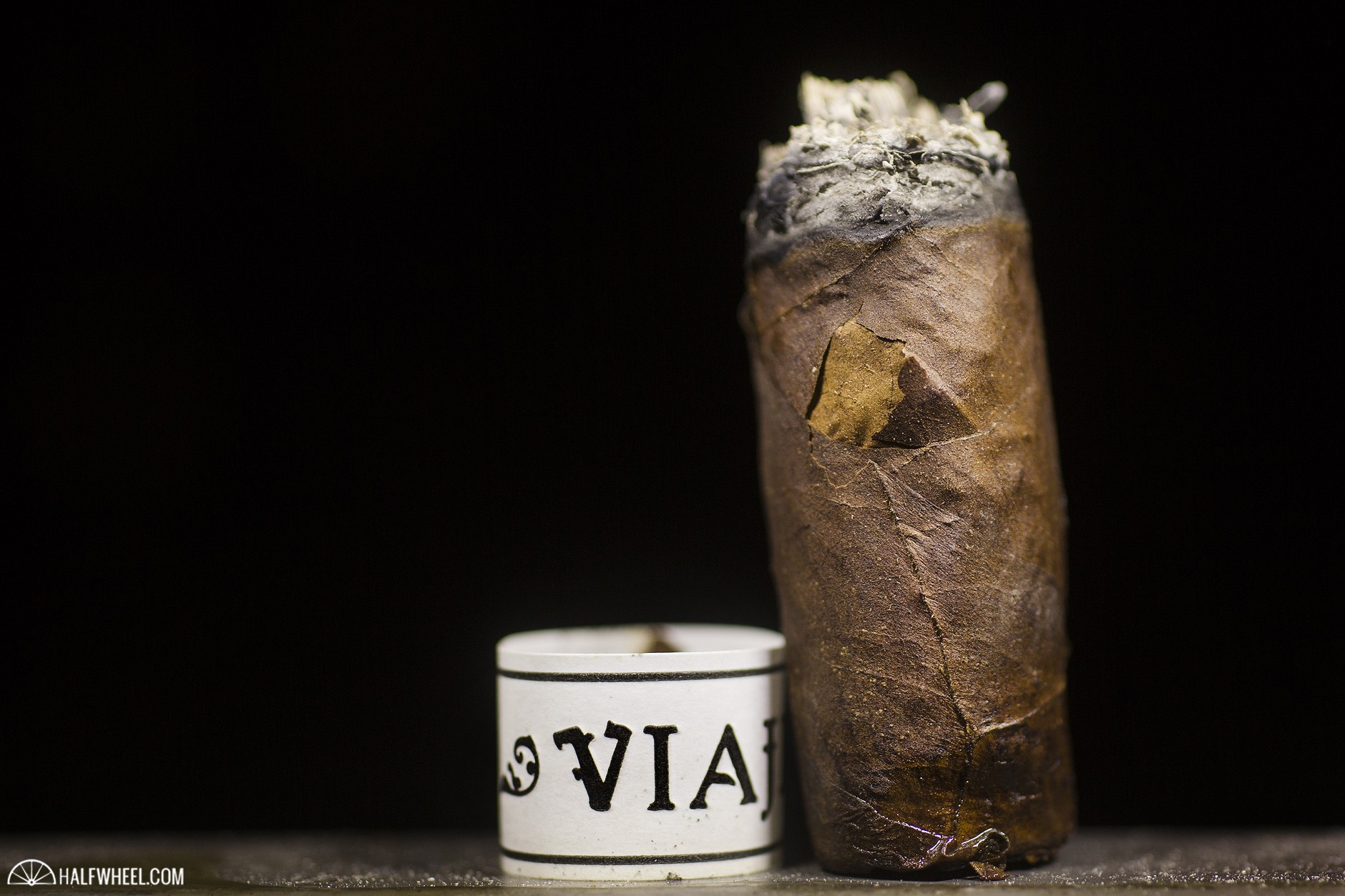 Well that was frustrating. I can almost assure you that whatever I was tasting after the first two inches probably isn’t what this cigar is supposed to taste like. It’s also not what the Viaje Hamiki likely tastes like if you find yourself smoking one without constant assistance from your lighter. Unfortunately, that’s not what happened to me and that's all I got. Not an offensively bad cigar, but certainly not what I expect or want to smoke.