It wasn’t Viaje’s first cigar line, it wasn’t the line that got the company end-of-year praise from Cigar Aficionado in 2010, but I’d be willing to argue that the Exclusivo is the line that cemented Viaje as a player in the cigar industry on a day-to-day basis.

When it came out, the black-and-silver banded Exclusivo line became notable for being the personal blend of company founder and president Andre Farkas, something that certainly added a good amount of appeal and desirability for the cigar, as Viaje was certainly one of the hottest young companies at the time. A Nicaraguan puro, the line uses a criollo 98 wrapper, with all the tobacco coming from AGANORSA and production handled by Raices Cubanas in Danlí, Honduras.

It made its commercial debut in 2009 by way of the Viaje Exclusivo Chiquito, a 4 3/4 x 51 figurado somewhat reminiscent of two of Arturo Fuente’s more notable vitolas of its Hemingway line, the Short Story and the Best Seller. In true Viaje form, the cigar was released to just two stores, adding elusiveness to the desirability.

Where the line really seemed to hit a fervor was early in 2010, by way of a packaging choice that has become a staple for Viaje—a jar. But it wasn’t the ceramic jars that the company has become known for, but rather a glass jar with a metal lid, something I’d be expect to see at a farmer’s market with pickles in it than on the shelf of my local tobacconist. 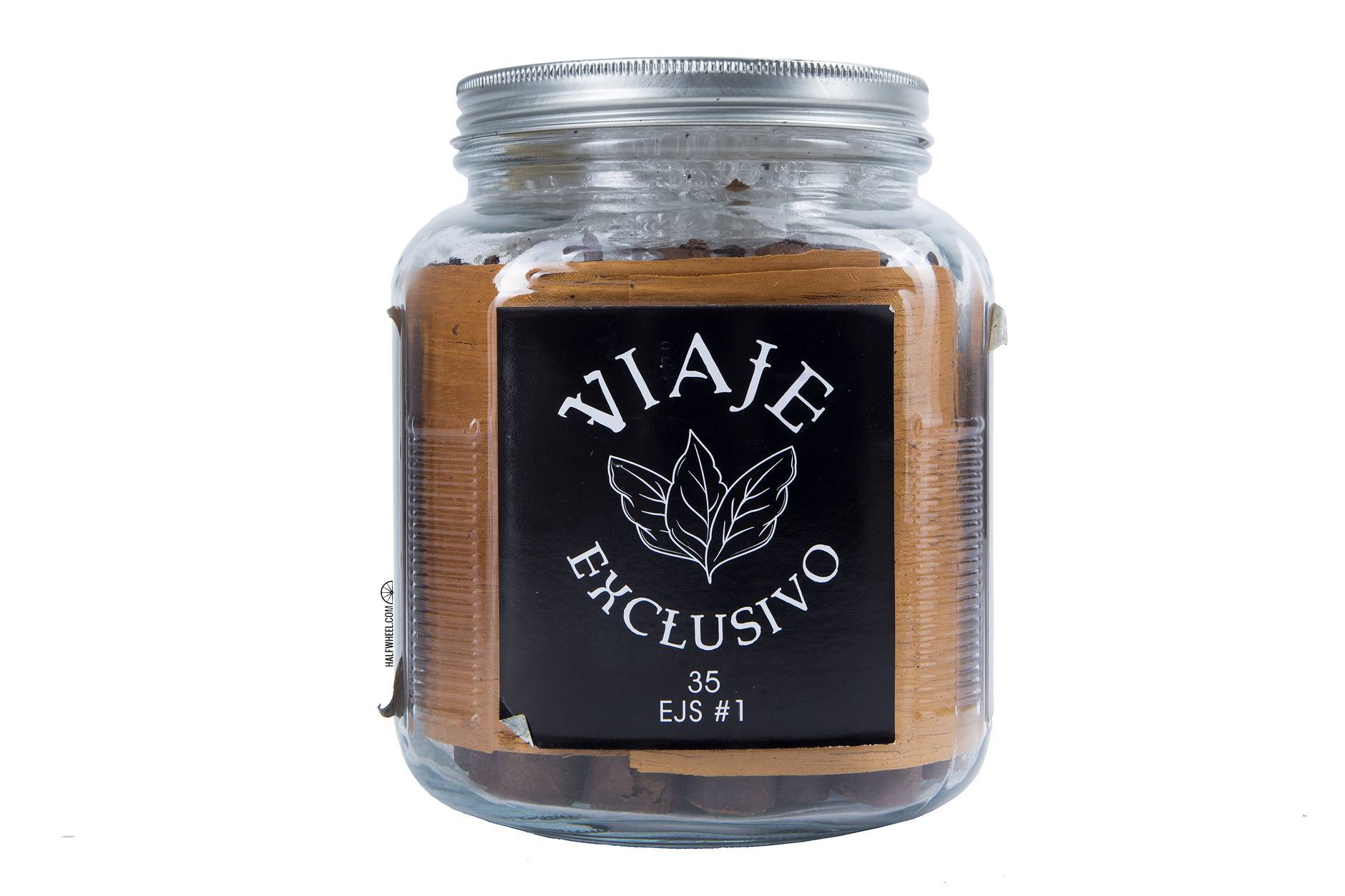 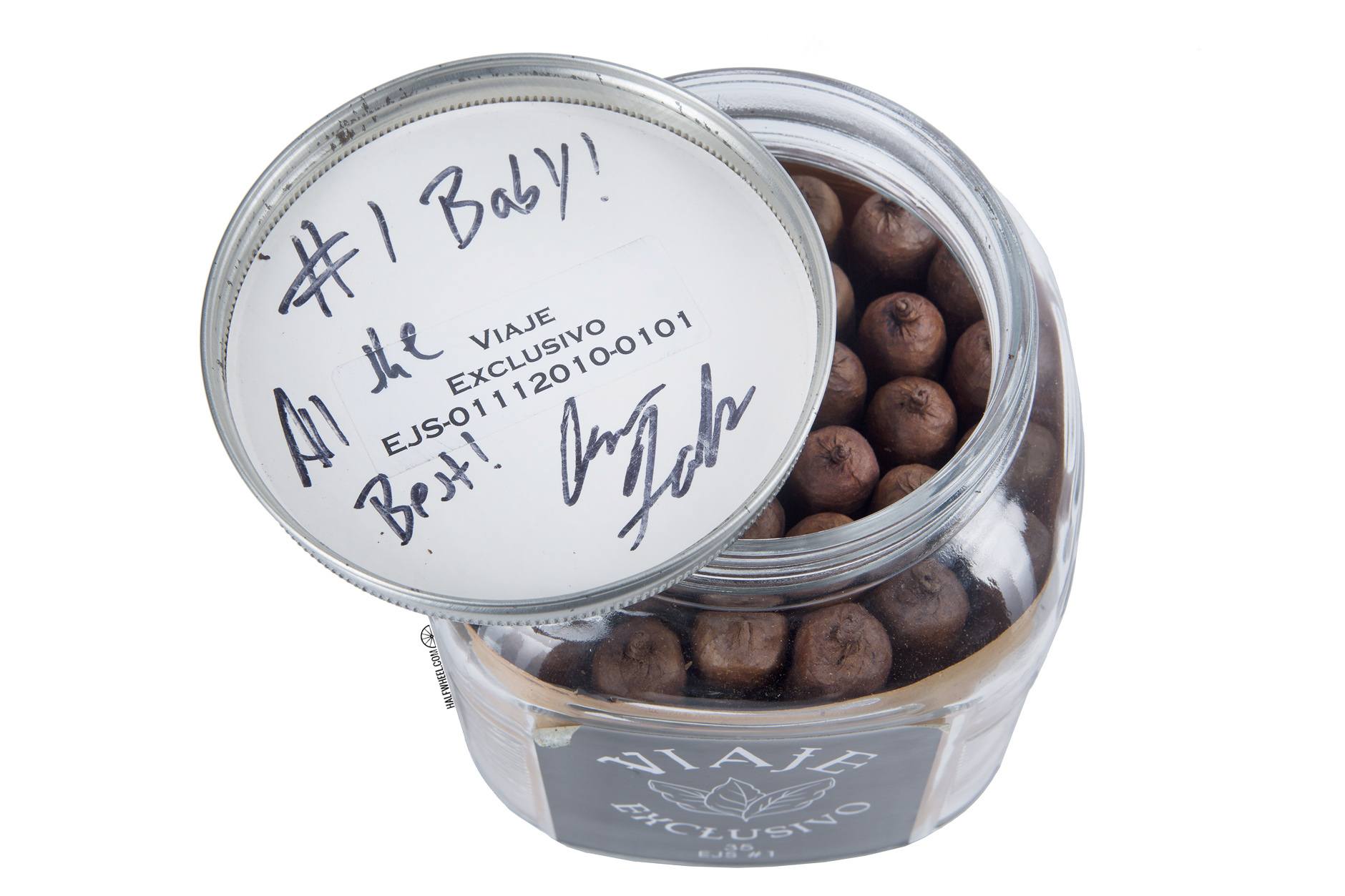 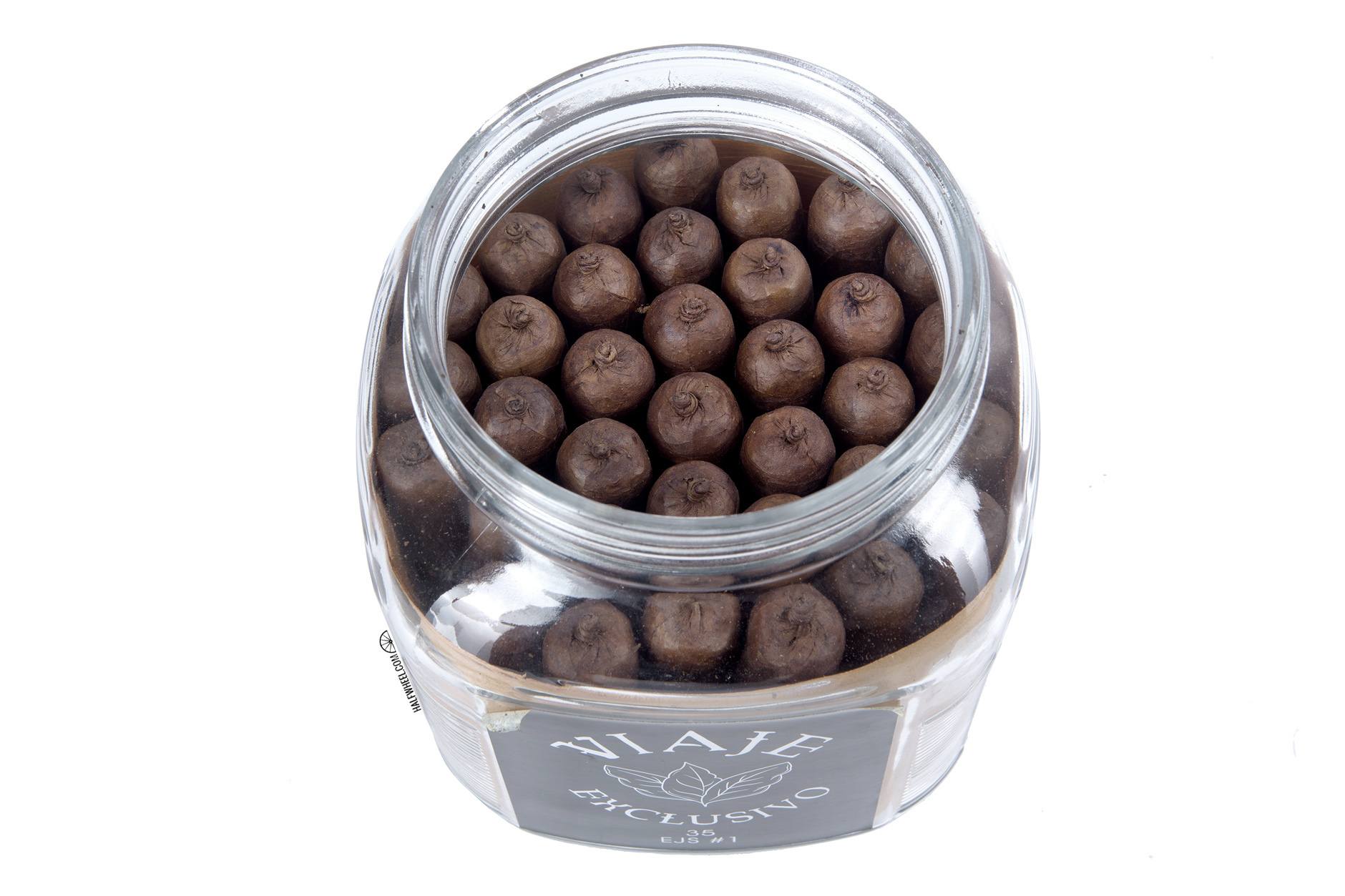 Just 100 jars were produced, each containing 35 robustos, a total run of 3,500 cigars. More would come that summer by way of bundles, though just how many remains undisclosed, and after that the line would blossom into arguably the centerpiece of Viaje’s portfolio.

New sizes would make appearances on a fairly regular basis, including the event-only Corona Gorda, a store exclusive Lancero, and a Super Lance, among the highlights. While some were regarded more highly than others, the one consistent note that seemed to appear in reviews was that it was one of the company’s most balanced and refined lines, showing finesse and balance whereas much of the company’s limited editions seemed to take a strength-first approach.

In April 2015, the company announced it was putting the Exclusivo line into regular production, with three sizes available in the United States. Additionally, the German market would get a 6 x 52 torpedo vitola.

It was a departure for Viaje, as in 2012 the company proclaimed itself to be “100 percent small batch,” meaning its Oro and Platino sizes would be reclassified to be annual releases instead of regular production lines.

Along the way, the line has continued to grow not just in sizes offered but Edición Limitada and Reserva versions, as well as line extensions by way of the Viaje Exclusivo Nicaragua, a new blend and design meant to complement the original Exclusivo; and the Viaje Exclusivo Leaded, a stronger version of the blend.

All told there are nearly two dozen releases under the Exclusivo header. Much like I found with the 2012 edition of the Viaje Exclusivo Robusto, the cigar is a touch shorter than listed, as the 4 7/8 inches includes the bun of the cap, so as far as smoking length it’s more of a 4 3/4. It wears a wrapper with a shade that gets me thinking of the underside of a piece of bark, on the earthy and dark side but also with some amber hues. There’s not much oil left on the wrapper and it shows its age a bit by way of a matte appearance, though the veins and tooth give it plenty of character. It’s a firmly rolled cigar with clean lines and flat seams, exposed only by some color variation in the capa. The foot offers a very neutral and familiar smell, leading me towards Ritz crackers and cedar, with little in the way of sweetness and less in pepperiness. The cold draw is near ideal for me with just a bit of firmness but no obstruction, while the flavors lead with a tangy wood note that evolves into a bit of Heinz 57 steak sauce.

For a cigar brand that is so known for producing strong cigars, the relatively mild and complex opening puffs are almost startling, yet there’s still lots to take in and at its best it’s a sensory treat. I’m relieved to find that the tobacco is far from skeletal and instead leads with a mix of mild black pepper, cookie dough, and just a bit of sourness that unfortunately lingers in the first half inch or so. When that flavor moves towards chalk, it’s a much better result for the cigar, though I know it’s still not everyone’s ideal profile. I find a bit of campfire and dustiness in the profile at points, the former of which is quite enjoyable, the latter has me thinking of a windy day on a gravel parking lot. Thankfully it’s not consistent from sample to sample. The burn line begins to go awry about three-quarters of an inch in on the first sample, appearing as if one spot is too challenging to combust so the burn line just proceeds moving up the rest of the cigar. It chips away at the problem spot well enough to eventually break off the ash, leaving a bit of blackened wrapper tobacco behind. With the ash’s departure, the cigar’s draw opens a bit, smoke production picks up, and I get a bit more black pepper and wood from the profile, which I’d slot at medium in terms of strength and body. If you’re looking for black pepper from the Viaje Exclusivo Robusto, through the nose at the start of the second third might just be the best to find it, and quite possibly one of the best experiences I’ve had in some time. It’s clean and refined yet still punchy, hitting quickly without being overly blunt or sharp, but balanced in its strength and approach. There’s a bit of building of the flavors, but outside of a sprinkle more of pepper, strength has largely stayed the same. The second sample continues with the dusty taste that pops in and out, and at the midpoint in that cigar it takes on a more significant part of the profile, getting heavier and thicker. The base notes don’t quite move along with it, and while the cigar is far from skeletal, it is definitely lacking the heartier notes that I associate with the blend. That’s not to say that the profile isn’t enjoyable, it’s just different, as seven years of time is known to do to a blend. The draw and burn are both quite good heading into the cigar’s final third, with only one or two touch-ups among all three samples. 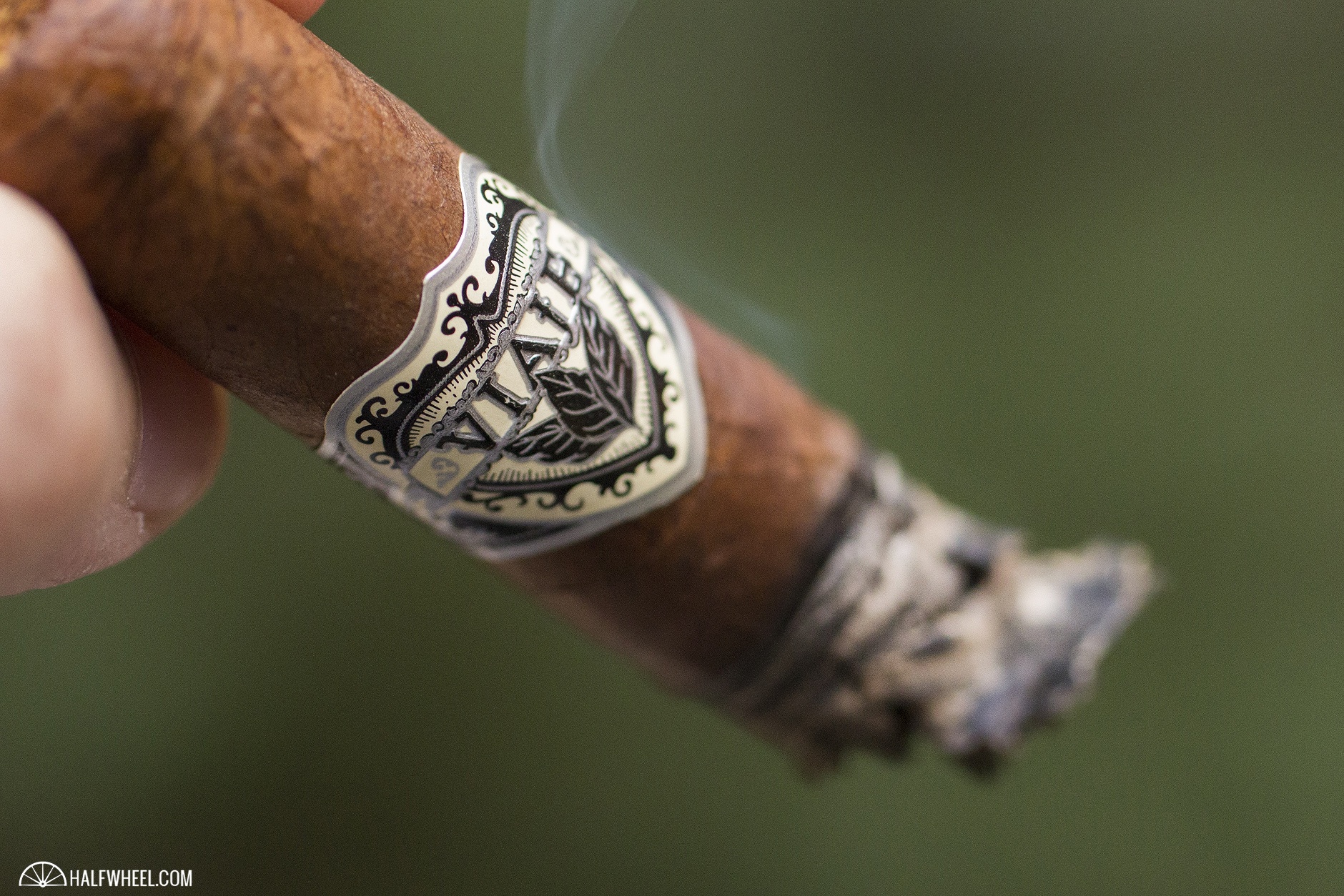 After knocking off a bit of ash on the first sample, the first puff of the final third billows an oatmeal-colored smoke, by far the most I’ve seen the cigar deliver to this point. It’s mouth-filling and rather soft in texture, warmed just a bit more than previously by proximity of the cherry. The pepper has suddenly been dialed way back, and now is almost an afterthought to both the palate and the nose as I retrohale almost in vain of finding it. That is, until another abrupt shift that introduces white pepper to the nostrils, while the tongue gets a much more subdued profile that has a bit of cedar, pistachio, and vanilla bean, with the chalk wanting to join in as well. When the seemingly final clump of ash breaks off before it will be time to put the cigar down the flavor and aroma pick up some additional complexity as the flavors amplify themselves just a bit. I pull out a draw poker and smoke the Viaje Exclusivo Robusto down as far as I can, ending with a bit of toast and wood before the heat becomes too much on the first sample, while the pepper falls apart and gets sour on the second. There seems to be a universally accepted maxim that age makes cigars better, though ask anyone who's done it a couple of times with cigars of different compositions and you'll find that the results can be less than life-changing. In the case of the Viaje Exclusivo Robusto, time wasn't great to the blend, but it certainly wasn't bad. The flavor and strength are notably smoother and mellower, so much so that the first puffs instantly command attention. From there, the cigar reveals flavors that have dulled a bit, notably less vibrant than in more recent cigars. If anything, it becomes apparent that the tipping point of what age does to a cigar might have been crossed, as I'd be inclined to say the years have subtract more than they've added. That said, the cigar remains more than enjoyable, and even with the few rougher spots, one of the best offered in Viaje's portfolio.