In July of 2010, Viaje Cigars released the fourth vitola in the Exclusivo series, the Double Edged Sword, a 5 3/4 x 52 Double Torpedo with closed ends that was sold in boxes of 25 and limited to just 3,125 cigars. It was the company’s first use of the vitola, made in what is described as the personal blend of the company’s owner, Andre Farkas.

A little more than three years later, Viaje has released the follow-up to the Double Edged Sword, the aptly named Double Edged Sword II, as part of the annual Collector’s Edition. While it has a Torpedo head, the DES II measures 6 1/2 x 50 and is open at the foot. In addition, instead of boxes, DES II is presented in ceramic jars. The release is also four times larger than the original with over 13,000 cigars being released.

The jars are made by the same company that makes Habanos S.A.’s Cohiba jars, they look like this: 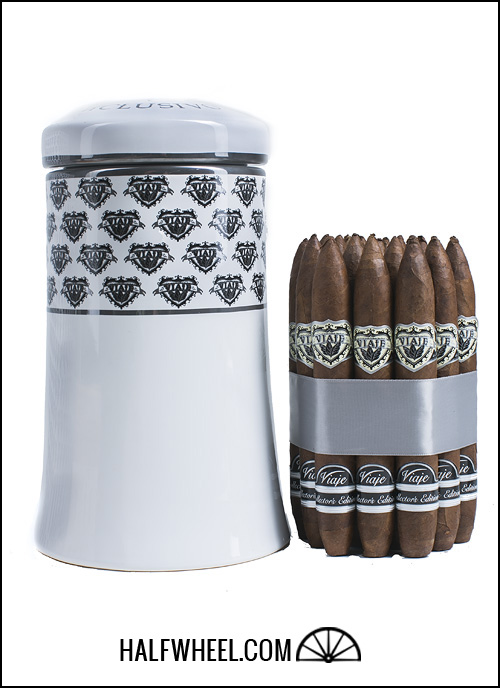 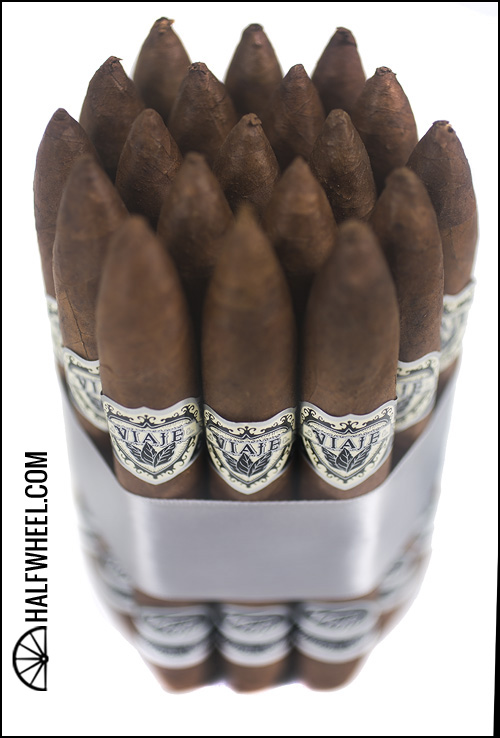 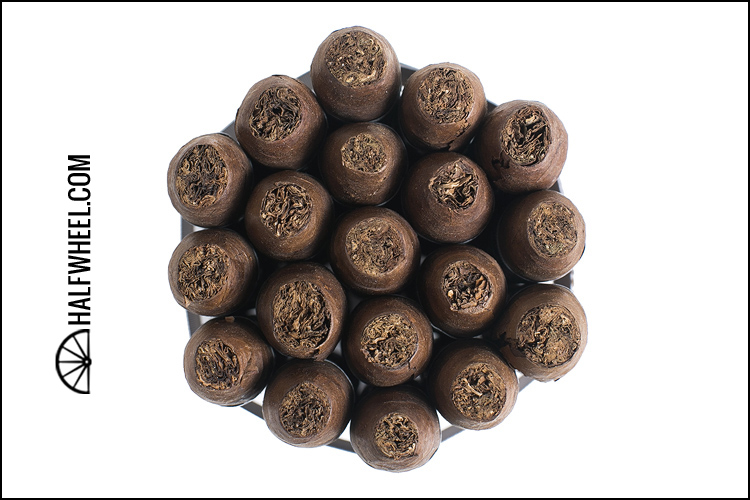 With the addition of the DES II, there are now 14 releases of the Exclusivo series. They are: 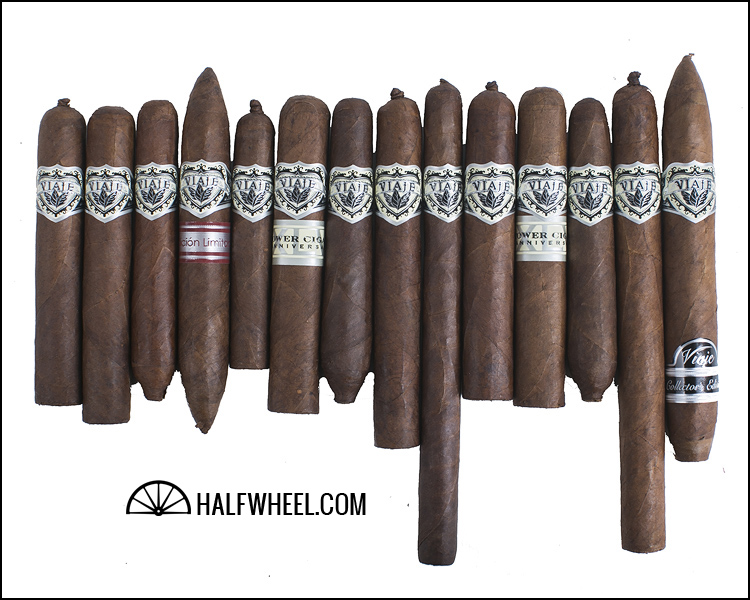 Collector’s Edition is a really cool project and it was started by the fans of Viaje. We started getting, about a year or two years ago, we started getting pictures of people showing me their stash of Viaje. They had stuff that I don’t even have anymore, they had stuff from back when we started five years ago. I thought, ‘wouldn’t it be cool to come out with a cigar every year that’s just for the collectors?’Anyone can smoke it; obviously you don’t have to be a collector.
It’s made just for them, it’s truly a one-and-done. We’re going to come out with a shape, put it in the collector’s edition packaging and then… done.

The Collector’s Edition also has its own secondary band, which both releases have featured: The Viaje Exclusivo Double Edged Sword II is covered in a milk brown chocolate wrapper that is fairly smooth to the touch and has a closed Perfecto tip for the cap with an open foot. There is quite a bit of give when the cigar is squeezed and there are a couple of soft spots that are easily apparent. Aroma from the wrapper is strong sweet chocolate, cedar, earth and barnyard. Cold draw notes include spicy wood, sweet hazelnut, leather and earth.
The Viaje Double Edged Sword II starts off the first third with fairly bland flavors of oak, leather and a touch of earth. There is just a touch of black pepper on the retrohale that comes and goes, but at this point, it is just not strong enough to really impact the profile all that much. There is a noticeable note on the finish that is sour at times, bitter at other points, sometimes distracting and worse, occasionally detrimental to the profile. The draw is a little tight until the burn line hits the end of the Perfecto tip, then it becomes as perfect as you can imagine, while the burn is decent so far. Smoke production is enormous, and the overall  strength ends the first third very close to the medium mark. There are quite a few major changes in the second third of the DES II, not the least of which is a significant and welcome increase in black pepper on the retrohale. The sourness from the first third is also long gone by the halfway point, replaced by extremely rich flavors of coffee beans, creamy leather, earth, cinnamon and cedar. There is also a distinct, yet not overly strong, floral sweetness that comes and goes throughout the second third. Construction-wise, both the burn and draw are now excellent, and the smoke production continues to flow out well above average. While the strength increases a bit, it still is only slightly above the medium mark by the end of the second third. 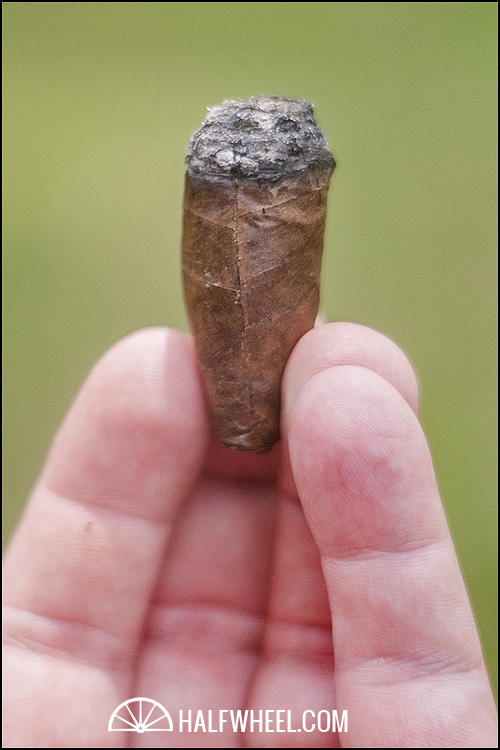 The sweetness from the second third morphs into a distinct caramel note in the final third while the floral note has all but disappeared. The amount of pepper on the retrohale remains fairly constant until the end of the cigar, and other flavors of cocoa, coffee beans, leather, cream and earth ebb and flow throughout the last third. Both the burn and draw have evened up and the smoke production shows no sign of decreasing anytime soon.  Strength-wise, the Double Edged Sword II ends up well short of the full mark. 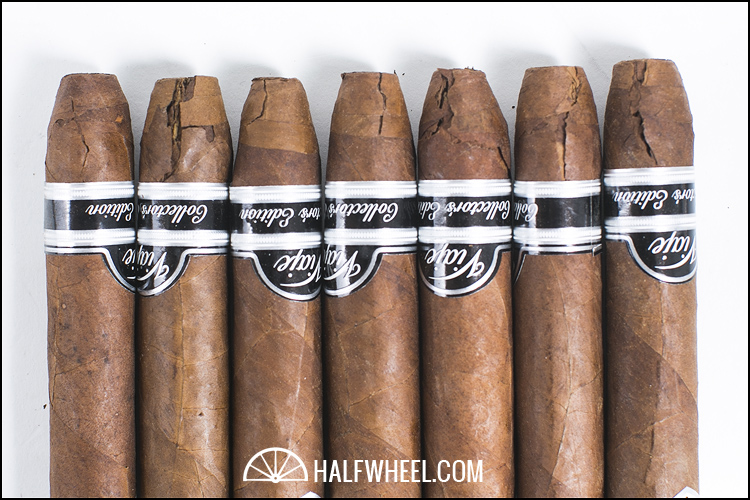