Whenever I see a new lighter, whether for review or not, I ask myself the same question: what problem does this solve? We’ve clearly mastered the idea of how to put fire in our pocket, so then each new releases becomes about making it more useful, more convenient, more affordable, more durable, and so on.

In the case of the Vector Icon II, this lighter not only tries to improve on the original Icon, but seemingly tries to nudge forward a very small portion of the cigar lighter segment, those that use a rechargeable battery that gets its power via a USB connection.

The basic premise is that the battery-powered version can offer several quick sparks in succession, which optimize the butane ignition process and provides for a more reliable lighting experience. Having used several such lighters, that is certainly true. Whether the rest of the lighter’s features make this a recommendable product remains to be seen. Functionally, the Vector Icon II is a triple flame torch lighter, with the three jets arranged in a triangular configuration to provide a thick column of flame. In terms of using it, it’s very similar to other lighters in that you flip open the lid, which begins the flow of butane. However, instead of a traditional mechanism that you pull, push or press to spark a piezo ignition, the Icon II has a touch-sensitive panel that engages an internal battery to provide several quick sparks that light the butane.

Beyond that, the lighter offers a large fuel window on the back side, improved venting and a flame adjustment mechanism on the base. It is available in eight colors: gunmetal satin, black matte, black crackle matte, sparkle blue, sparkle black, red lacquer, chrome satin and prizm.

As noted above, it is fairly similar to a standard lighter. Flip open the lid and then tap the panel instead of engaging a traditional mechanical ignition. It’s remarkably simple and efficient, though when I’ve handed it to people to use for the first time, they seem to take a moment to orient themselves to it as there is no ignition mechanism, which seems to be the starting point for many lighters.

On the note of how it works, one of the must-dos in order to get the most out of the Vector Icon II is to be sure to fully open the lid, since this is what regulates the flow of butane. Whether you flip or pull it back, do so with conviction. Anything less will result in suboptimal butane flow and thus a less than ideal flame, and it’s surprisingly easy to not open the lid all the way. It feels like a matter of a millimeter, but it makes all the difference in the world. 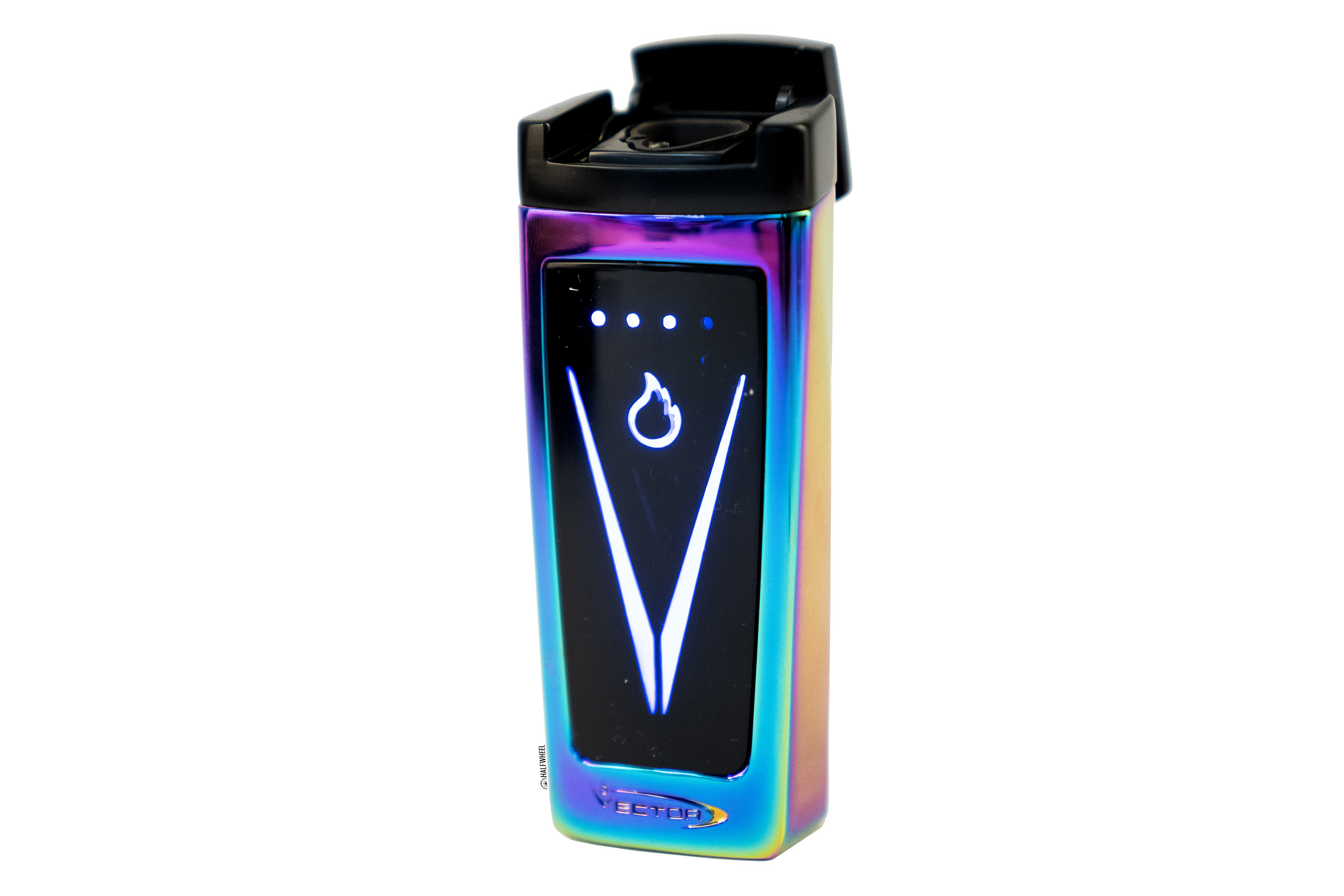 While the prizm finish of the Icon II that I used for the review is certainly unique, the clear standout is the battery-powered ignition. The ignition on the Icon II and similar models stands out because they offer several quick sparks in succession—you’ll notice them by the clicking sound—and that significantly ups the chances of the butane being ignited on the first try. Quite simply, as long as there is butane in the tank, the battery is charged and the flame adjustment set properly, you are pretty much guaranteed of the Icon II igniting on the first try. Not long after the lighter was shipped to me from halfwheel’s office, I wanted to test it out and see how it worked before I put it into regular usage for the review. As I tried to dial in the flame height, a piece of the plastic flame adjuster broke off and the adjustment mechanism stopped working, seemingly that the external piece had become detached from the actual mechanism that adjusted the flame height.

That led me to test out Vector-KGM’s No Proof Warranty process. I sent it to Vector on March 7, paying for shipping and in theory the $12 service fee. However, I haven’t heard a thing from the company nor have I seen the lighter come back. The company says that it has an industry-leading turnaround time of 1-2 weeks, but I haven’t yet had that experience. I will update this review if and when the repaired lighter appears. If you really want a triple flame torch with a battery-powered ignition, this is certainly at or near the top of the segment. It’s remarkably easy to use and addresses the two biggest drawbacks of the rechargeable lighter segment—keeping the fuel tank and battery full—about as well as I could ask. You’ll still need to do the work, but at least you have an easy way to see where both are at before heading out for the night with it.

Now, put this in the bigger segment of all triple-flame torches and the decision becomes a bit harder, as you have to justify the added cost for the convenience and functionality of the ignition. For me, it isn’t a great value proposition at the moment, much like I wouldn’t inherently pay more for a vehicle with push-button ignition to avoid using the key, nor would I pay a premium to tap my phone as opposed to pulling out my credit card when paying for something. But if you want the Icon II’s biggest selling point, it certainly delivers.