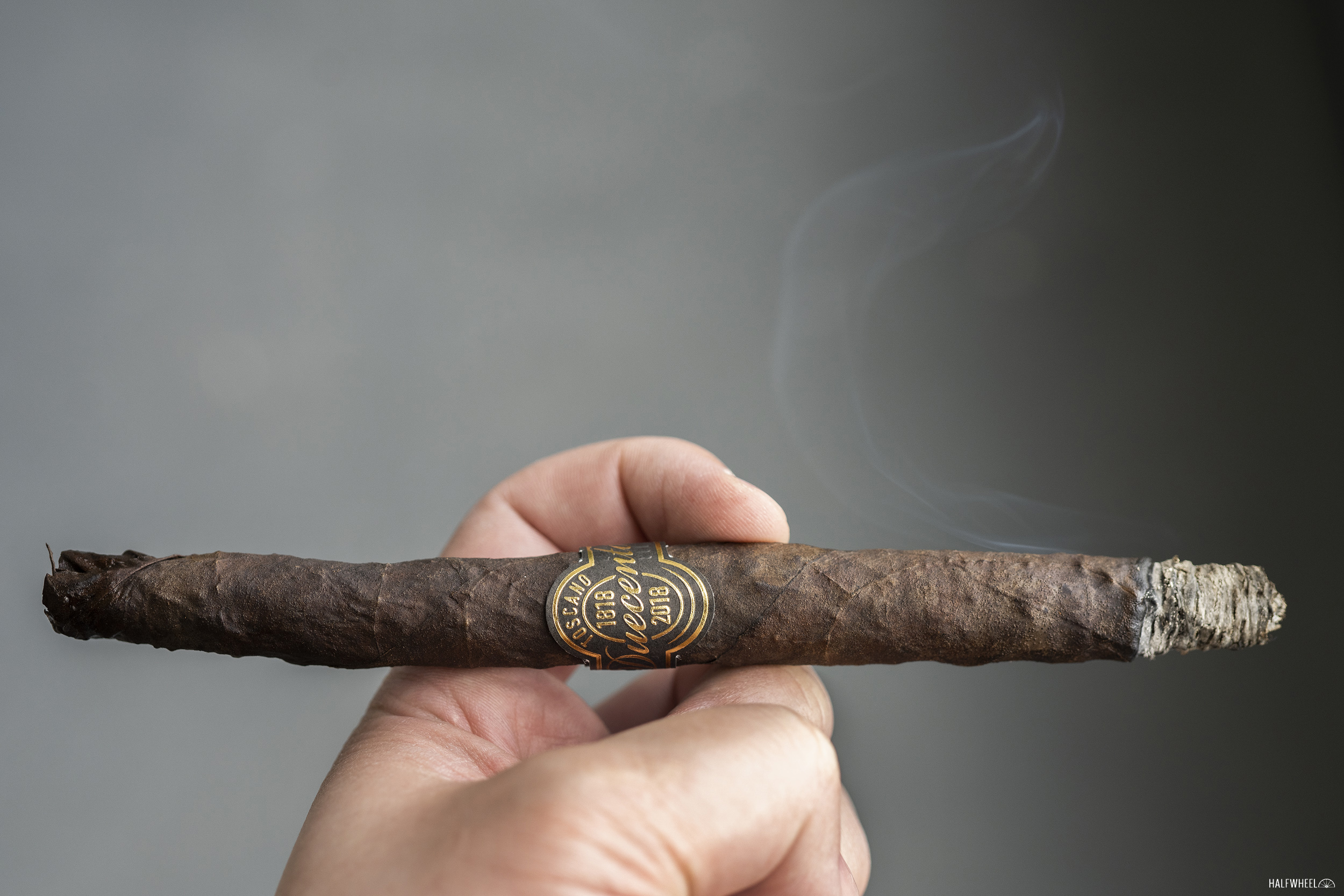 One of the things I’ve been meaning to do at halfwheel is to review a Toscano.

The Italian cigars—the name of which is both a reference to where and how they are made—have been sold in the U.S. for a handful of years now by Miami Cigar & Co. From what I’m told, it’s gone better than expected, or at least that’s the thoughts domestically.

While most of the premium cigar world got introduced to fire-cured tobacco in 2013 by Drew Estate and others, it has been used in cigars for quite some time. Notably, it’s used by Toscano, which has been making cigars for more than 200 years.

Italian cigars are different than the premium cigars we review in a few notable ways. First, there is no binder leaf. Instead, the fillers are held in place simply by the wrapper. That wrapper leaf is a lot rougher looking than what is found on premium cigars, so much so it looks like a lot of the binder tobacco that is used for premium cigars. Additionally, the cigars aren’t placed into presses, meaning that the imperfections in both the shape of the cigar and the wrapper never get smoothed out.

Speaking of the shape, the cigars Toscano makes tend to be long, thin cigars that are thick in the middle and then taper down towards the head and foot. Unlike a premium cigar, there’s no cap, meaning the cigars are cut on both ends. This is both practical and necessary because of the tobaccos used and the moisture levels at which the cigars are rolled.

As for the tobacco used, these cigars oftentimes use a mixture of both Italian and Kentucky fire-cured tobacco.

Today’s review is of the Toscano Duecento, which—despite what Google Translate suggests—I think is supposed to be a reference to two centuries. It was released in 2018, Toscano’s 200th anniversary, though wasn’t sold in the U.S. until the summer of 2020.

It’s 7 3/4 x 46 tapered cigar with a Kentucky-seed fire-cured wrapper that is grown in Tennessee, with fire-cured fillers from Italy and Kentucky. 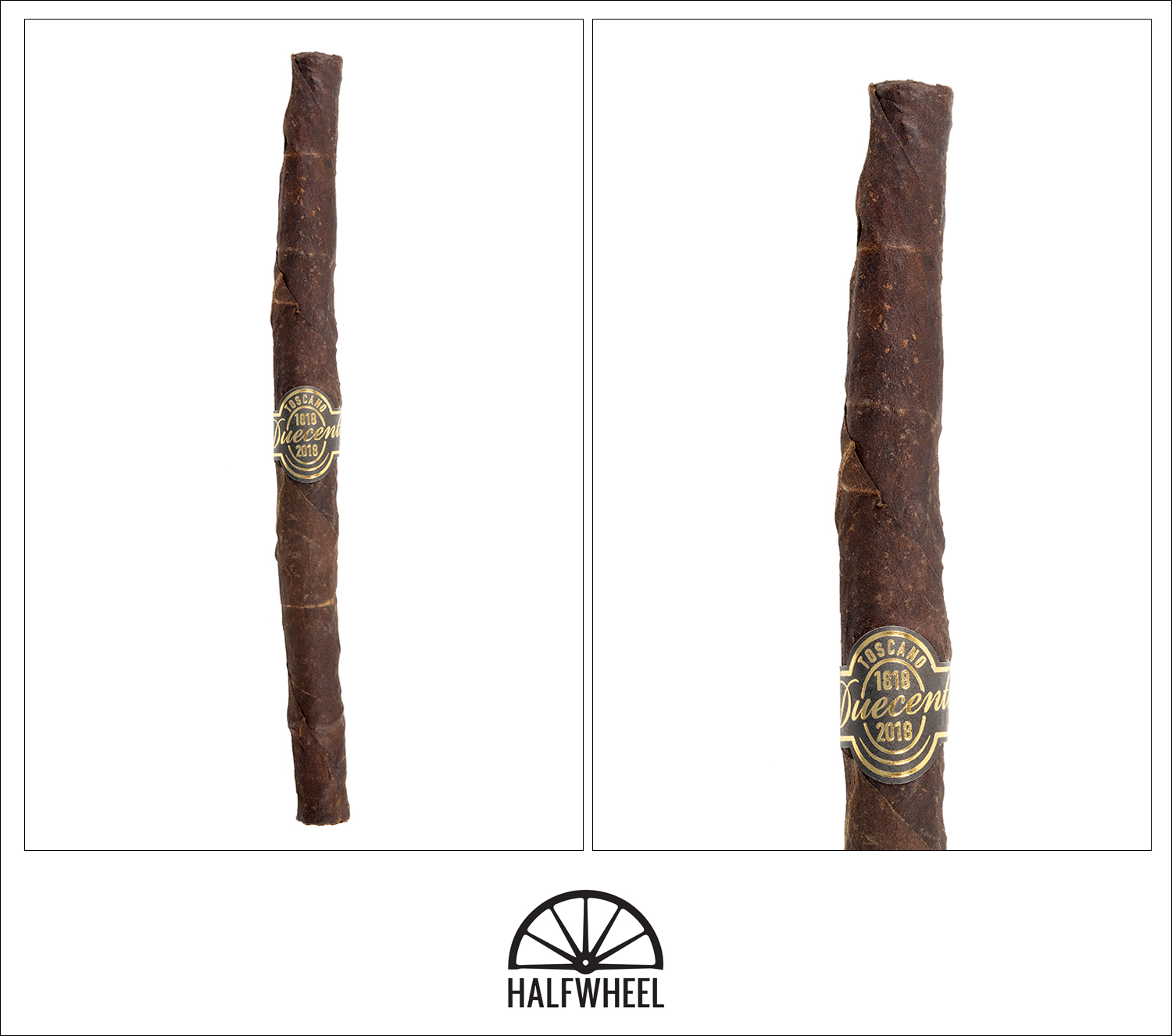 This is a cigar that is quite a bit different than anything else we have reviewed. And while our protocol calls for me to review this in the same manner, I’m not entirely sure how fair that is. With that being said, the wrapper here is not what I would expect for a premium cigar, which is understandable given that this isn’t a premium cigar. I’m not an expert in Italian cigars, but I have yet to see one that has a wrapper that is close to that of a premium cigar. It’s very dark, there are lots of veins and it’s pretty rough to the touch. The cellophane is also quite a bit different than a premium cigar. Instead of just sliding the cigar out of one end, the cellophane is torn at the center and comes apart in two pieces. I’m guessing that this is because many people cut the cigars in half and then smoke the ends separately. The aroma from the wrapper is also quite a bit different than anything I’ve ever smelled. It’s got a unique charcoal and woody mixture that is quite sweet. There’s a smell that reminds me of a brand new Think Tank camera bag I once received, sort of like a new car smell, but different. The foot has a lot of the aforementioned roasted fire-cured combination, but it’s accented by something that reminds me of a lemon-scented cleaner. You can sort of smoke this however you want—either as one large piece or as two halves—and that extends to cutting the ends of the cigar. They are left open, which is how I choose to smoke the cigar, but you could cut off a bit more if you’d like. The cold draw is similar to the foot, though there’s an isolated lemon flavor as well a mild amount of pepper. It’s not as intense as the aroma coming off the cigar, but the roasted flavors are so pungent I’m not sure it really matters if it’s medium-full or full.

Note: Rather than dedicating a specific paragraph to each third, I’m going to split up the next three paragraphs as follows: two paragraphs on smoking the cigar as one intact piece and one paragraph about smoking just half the cigar when it is cut down the middle.

The Toscano Duecento, in its complete form, starts with a medium-full mixture of woods, toastiness, pear, leather and a bit of creaminess. On the very first puff, the roasted, fire-cured flavor isn’t that prevalent in the mouth, though both the aroma coming off the cigar and the smoke makes it quite clear that it’s here. Pretty quickly, the flavor begins to take over and I’m left with the fire-cured mixture—with the toastiness a bit stronger than the wood mixture—over some vanilla sweetness. The fire-cured flavor is so prominent that it’s tough to really pick up anything else and I’m a bit disappointed my palate isn’t able to, but after five or six puffs it just seems like the flavor is too overwhelming. The finish has a bit of harshness, a generic nut flavor and some grains. Retrohales have even more of the toastiness, though the finish after blowing out through the nose is different. There’s a bit of caramel on the finish, but it’s completely overwhelmed by the spiciness in my mouth. It feels like my taste buds just indulged in a spice buffet with cinnamon, white pepper and paprika being the obvious hints. I sort of feel like there’s some lemon, but that might just be the after-effects of the overall barrage. Flavor is full, body is medium and strength is medium. Construction is great, though I’m having to remind myself that my normal approach of smoking the cigar as slow as possible without it going out is not a good one because the Toscano is made to be puffed on much more frequently. 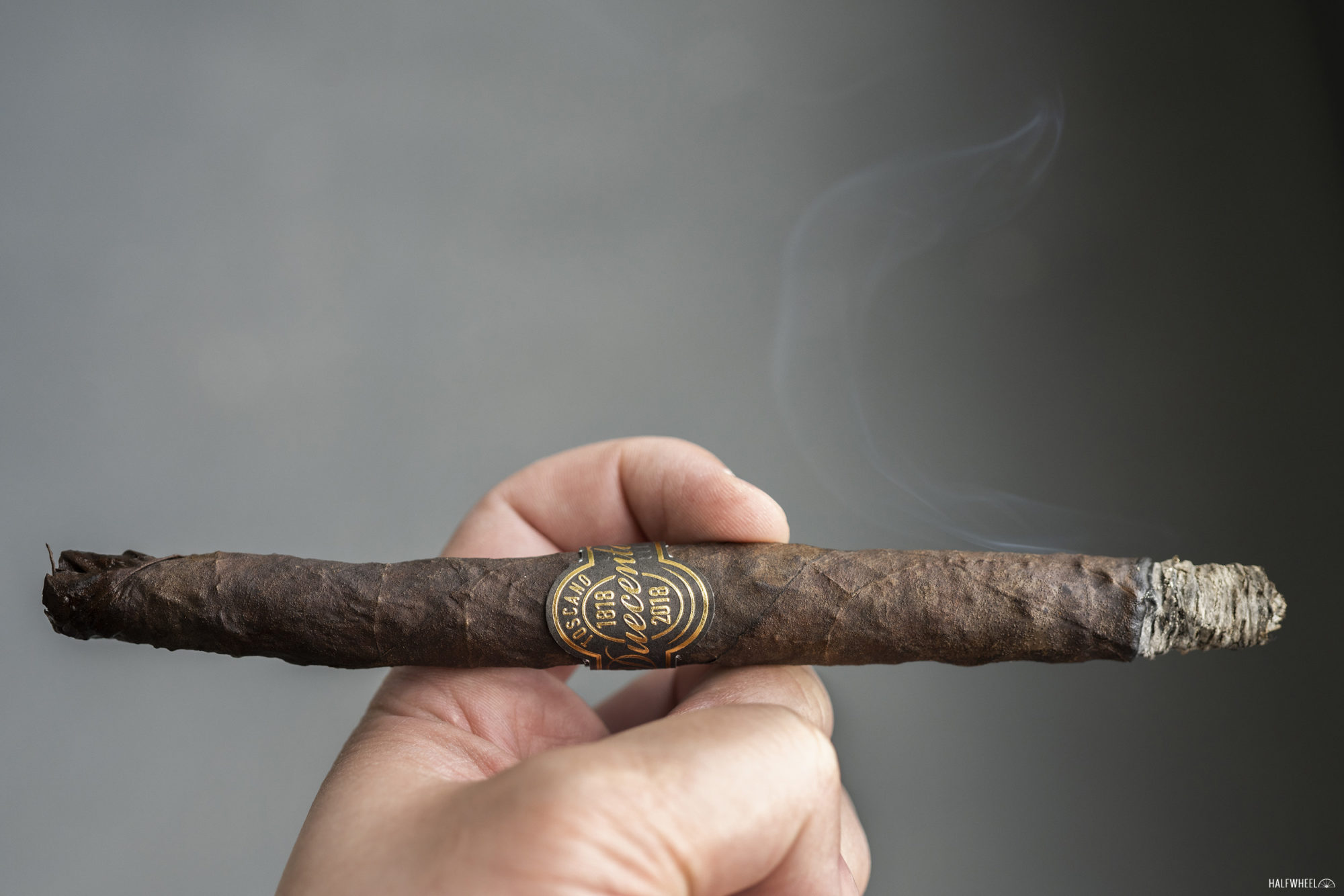 If you are going to smoke a Toscano in one piece, the better way to break up the transition of the cigar is: the start, the part close to the middle, crossing the middle, and everything after that. While the draw wasn’t tight, there’s a real difference in how the cigar performs as it gets close to the center part—its widest part—and the flavors definitely pick up in both the number of flavors and their intensities. It’s still a lot of the roasted flavor, but there’s now bread and oak flavors upfront. The finish has a more defined toastiness with some acorns accenting it. Retrohales seem to have lost the sweetness from the fire-cured flavor, which creates a darker sensation. The finish is dominated by grains and cinnamon, no longer the spice buffet that I tasted in the first part. The Toscano gives me as much smoke production as I want with a very simple formula: just puff more. But there’s a real uptick in smoke production at the middle part. About an inch after the center part, there’s a change. The charred flavors remain, but there’s now a metallic undertone in lieu of the sweet accents the fire-cured flavors started with. Retrohales have a smooth oak flavor and a sweet fruitiness, both defined and vibrant. The finish starts with a green bell pepper flavor before leading to a chewy texture. By the end, flavor is still very full while body and strength are medium. Once again, this paragraph covers a different cigar smoking experience. This seemed like an appropriate use for the Coltellerie Saladini cutter we bought a while back, so I centered the Toscano in the cutter and cut it in half. The bands on the Duecentos I got were never perfectly in the middle, but they are pretty easily moved as needed. Once again, I didn’t recut the tip, instead just lighting the exposed middle part. From the very first puff it seems quite clear, this is the better way to smoke the cigar. It begins with that vibrant sensation I got from the middle part of the fully intact cigar—which makes sense given that’s where I’m starting—and I pick up dry wood on top of the roasted fire-cured flavors, which have both the toasty and sweet parts. I will say, it takes a second for that flavor to emerge in its full sense, but it lasts through the finish. The fire-cured flavor remains the dominant force, but there are secondary flavors of a nice key lime flavor and a woody sweetness that I struggle to place, the latter of which seems like a great cologne sensation. Retrohales have wheat pasta, more of the key lime and of course, an even more intense version of the roasted flavor. It finishes with some dry lamb sensations and bread. There’s a bit of a shift a little more than an inch in, as while it’s predictably still dominated by the roasted flavor, there’s an apple flavor to accent it. Retrohales have a meaty flavor, but I wouldn’t say it tastes like lamb. Things proceed to get sharper and sharper, creating a harsher profile, though there is a bit of a reprieve in the form of a creamy wood flavor in the retrohale. From start to finish, the half Duecento was full in both flavor and body and medium-plus in strength. 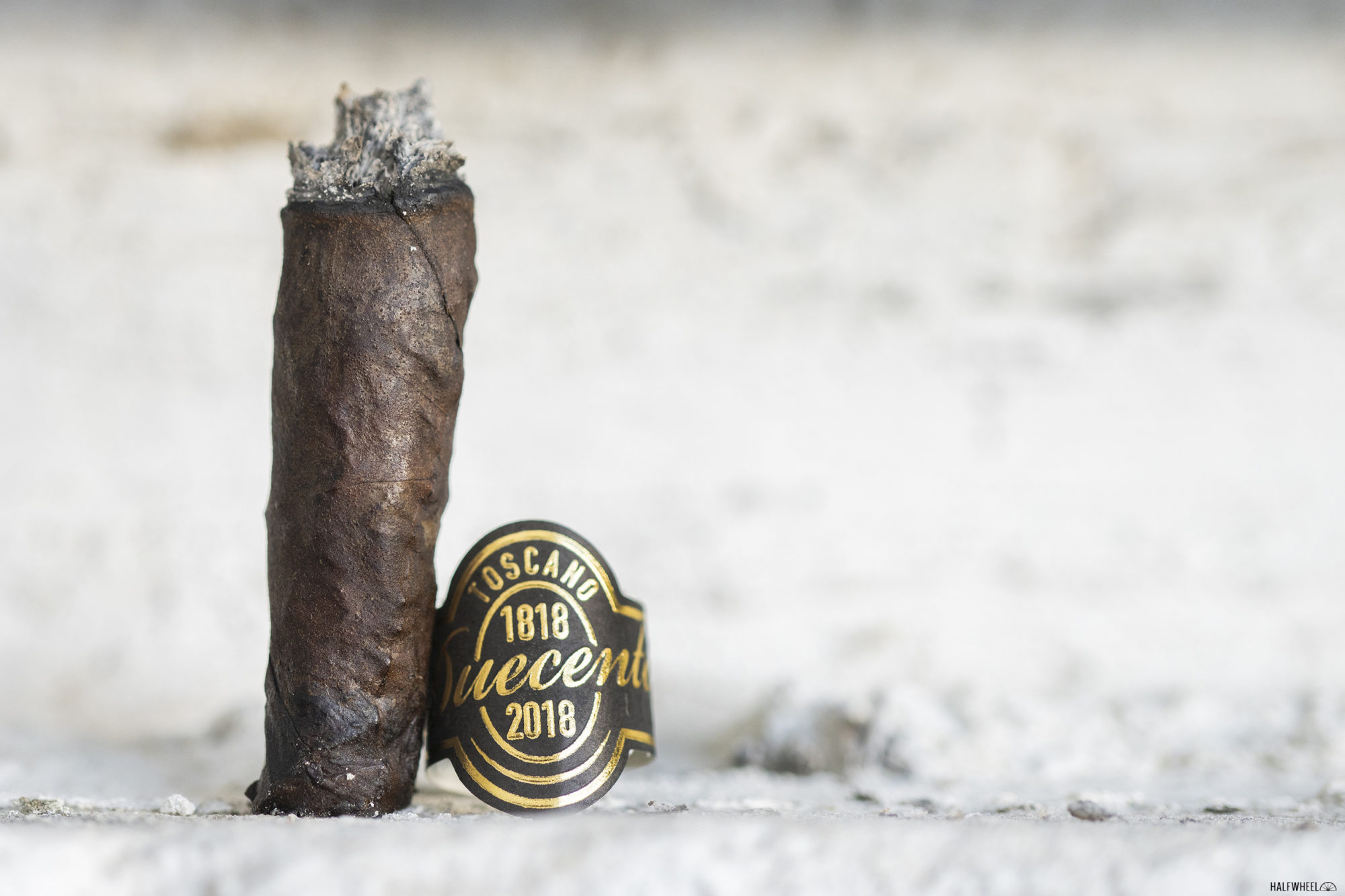 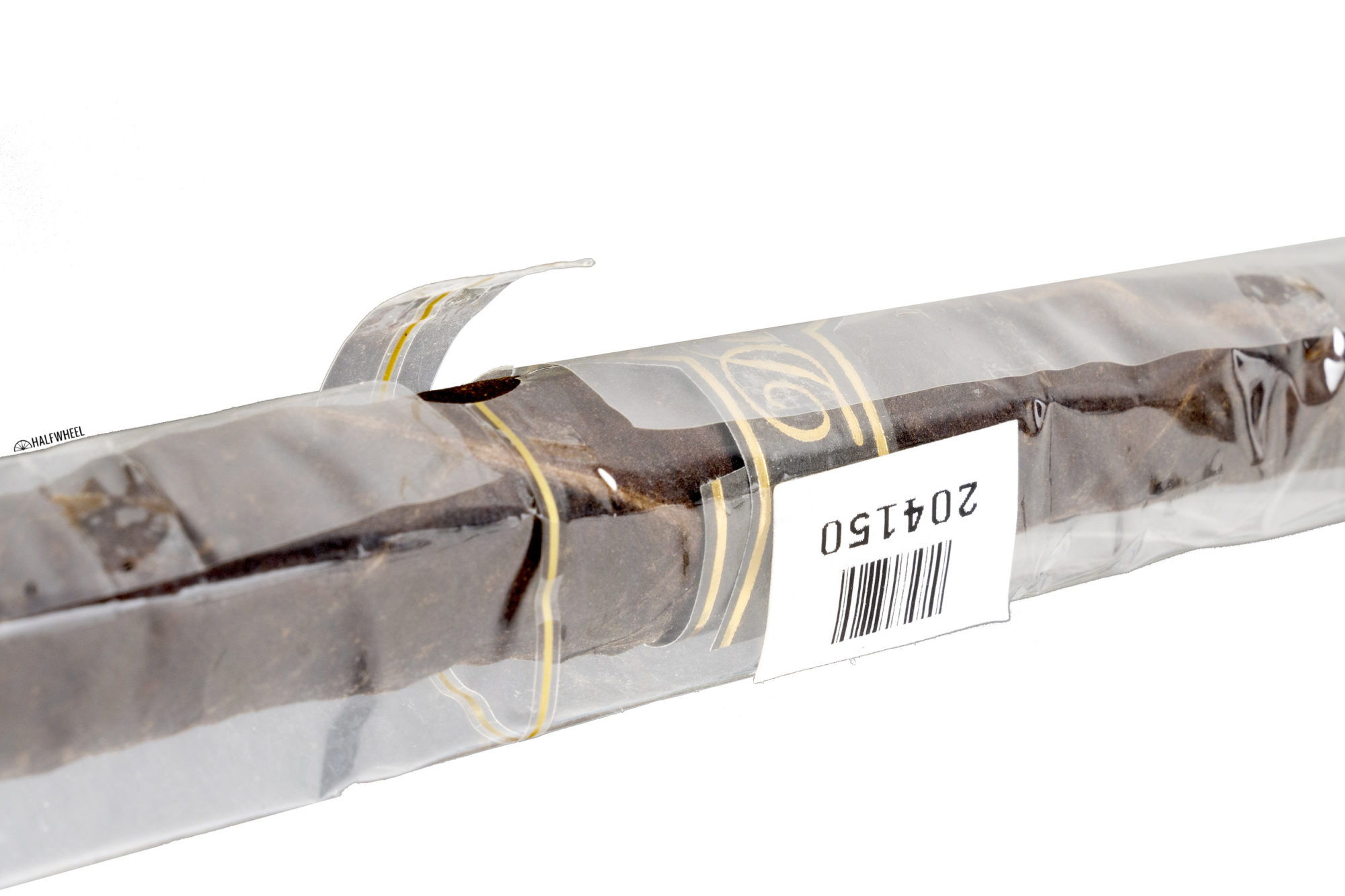 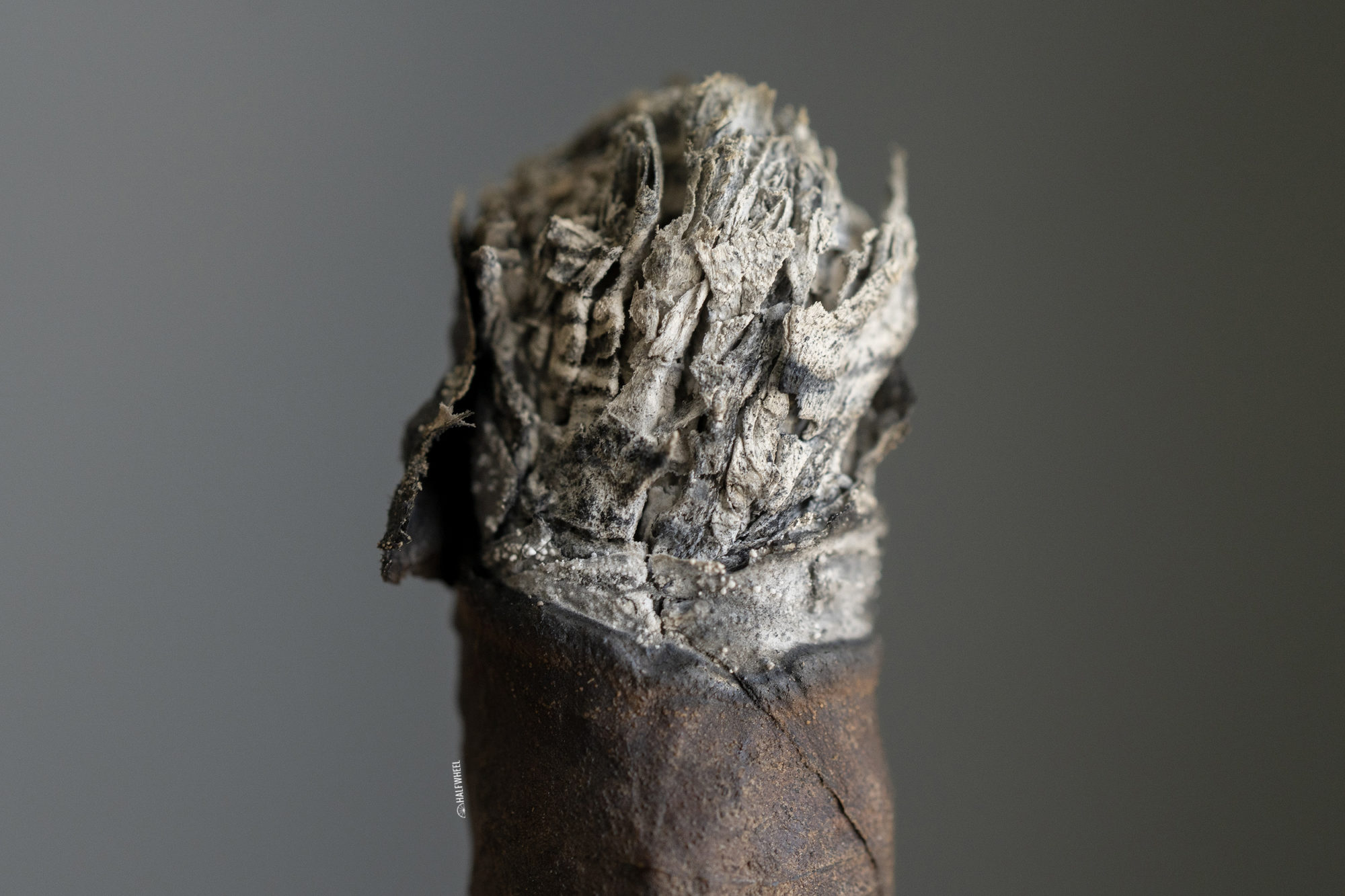 As a competitor to the products we normally review at halfwheel, this isn’t really a good cigar. The profile is unique but not as complex as a traditional cigar. It’s also probably too overwhelming to be a cigar that you can smoke if you want to smoke another cigar that day. The unique roasted flavor is so overwhelming and sticks in my mouth for hours after smoking the cigar. But this isn’t designed to compete with a traditional premium cigar. I think this is a great option if you want a quick cigar. Unlike a lot of the cigars that have tried to deliver on “quick, 15 minute cigars” the Duecento takes no time to get started. The punch is there from the moment you first take a puff. And for someone that used to enjoy smoking Liga Privada Papas Fritas on 15-minute walks, there’s also an added advantage that the Toscano can be enjoyed in 10 minutes or an hour as it’s incredibly accommodating to puff rates. What's a bit surprising is that even when cut and a half, this ends up being a $5.50 cigar, which is a problem. There are a lot of good $5 cigars, particularly if the objective is a short cigar, and so this more or less comes down to whether you want this specific flavor and not a question of trying to save money on smaller cigars.