In the case of the new Rocky Patel LB1, it was the middle option. When the blend was being developed it was known at the El Paraiso factory in Honduras as LB1 and rather than trying to think of a new name and backstory, the company just kept the LB1 name. As for that blend, it uses an Ecuadorian habano wrapper over a Nicaraguan binder and Honduran and Nicaraguan fillers.

There are four regular production sizes offered to all stores, while retailers that placed orders at the 2019 IPCPR Convention & Trade Show in Las Vegas were given access to a 7 x 48 Churchill with a shaggy foot. Compared to the new bands for the A.L.R., the LB1 feels like it’s stuck in 2009. There’s nothing wrong with the packaging; in fact I’m particularly fond of the outside of the box, but it’s not close to the new A.L.R. There seems to be a goal of trying to match the wrapper to the dark copper in the bands—at least that’s what the press photos look like—but that’s not what happens in practice. Aroma off the wrapper is sweeter than most, almost like the cigar was sprinkled with some apple juice, though otherwise it smells normal. There is leather, barnyard and some added sweetness, around medium-plus. The foot is similar with a lemon that smells identical to Grandma’s lemon cookies along with earthiness and creaminess. Cold draws from the Rocky Patel aren’t as sweet, it still has some of the lemon cookies, but it’s super sharp overall with creaminess and earthiness.

I wasn’t expecting the first puffs to feature that same lemon cookie flavor that was so identifiable early on, but I wasn’t expecting it to be this dull. The start is a rather generic cedar flavor with nothing else. As the cigar progresses there is still quite a bit of cedar, but there’s also an underlying buttermilk flavor and some indeterminate sweetness, something that I wish was more defined. Retrohales have more cedar—not as overwhelming as it is in the mouth—along with some creaminess, mustard and a bit of red pepper underneath. Flavor is medium-full, body is almost full and strength is medium-plus, though getting closer to medium-full. Construction is good, though I do wish the cigar was burning a bit quicker. 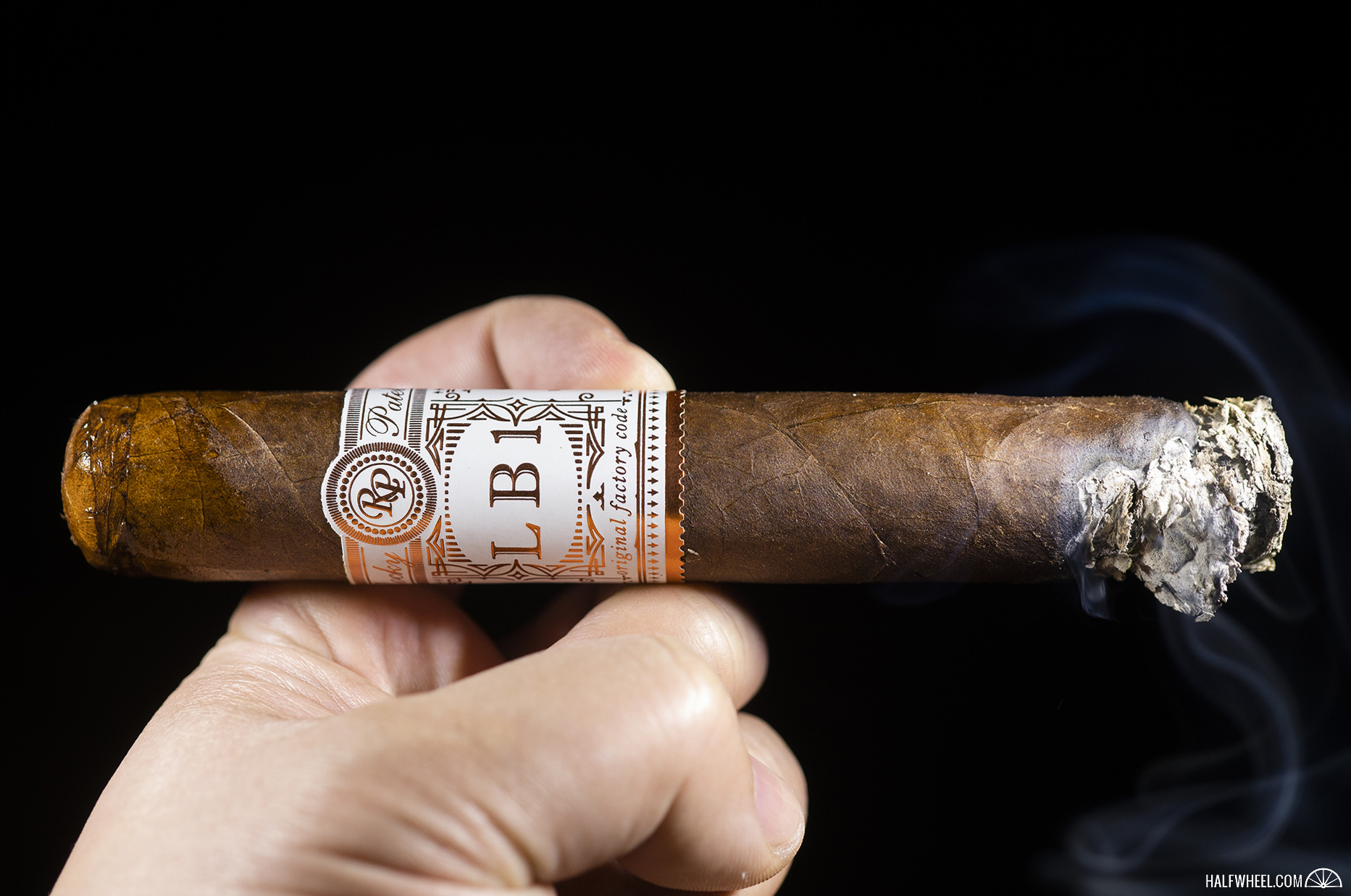 The good news is that the second third of the Rocky Patel LB1 has something other than cedar. The bad news is that the mixture of creaminess and oak seems a bit too concentrated and produces somewhat of a harsh sensation at times. Still, it adds some much-needed depth to the profile. Retrohales have even more oak, though now joined by both berries and raisins, both of which help immensely. The finish has a ton of potato chips, almost like I’ve just downed a bag of Ruffles. Flavor is nearly full, body has stopped increasing and sits just below medium-full while strength varies between medium-plus and medium-full. As I’ve noted before, just because a cigar isn’t that strong on a single puff basis, larger cigars can pack a certain type of cumulative punch and that’s the case with the LB1. After over two hours of smoking—and two inches of cigar left—I am starting to feel some of the nicotine on one of the samples, though the other two aren’t as aggressive. Flavor-wise, it’s much toastier joined by a woodiness that reminds me of the first third, though not as dominant as the earlier parts. The creaminess remains, though it is fading, and a generic earthiness is emerging. Retrohales start out with an indeterminate sweetness, but eventually—either through my doing or the cigar’s—I begin to identify it as a pear flavor. The Ruffles flavor has now turned into more of a grain-like texture, which is fine, though probably not for the better. Flavor remains full, body seems to have peaked earlier and now sits at medium-full, while strength is on the lower end of medium-full. The Rocky Patel LB1 isn’t forgettable, I’d say it’s probably in the top 25 percent of cigars I’ve smoked this year, but it’s going to get lost in the Rocky Patel portfolio. It’s not as flashy as A.L.R. or Number 6, it doesn’t have the face of a brand like Hamlet, and it’s not as good as some of the brand’s recent stalwarts, notably Tavicusa and Twentieth Anniversary. And while it’s unfortunate in the case of LB1, it’s a very good sign for Rocky Patel, because if a cigar this good is going to get lost then things are going quite well.