Do not fear, Charlie (Ray) Stahl’s status of “resident PDR whore” is not in jeopardy. Unlike the Kentuckian, I’m not one hundred percent sold on what Abe Flores and the rest of his team do at Tabacalera Don Leoncio. To me at least, it is clear that Pinar Del Río is capable of making a very good cigar, one doesn’t have to look any further than the BOTL.org Small Batch from last year. However, unlike Señor Stahl, I haven’t had any other PDRs that have really stood apart from the rest. After the jump a review of a Madura, yes “Madura” not “Maduro.” Today’s Smoke
1878 is one of the years that seemingly lost in all of the important dates in the country, but it is the year that Cuba was divided into six provinces. As such, Flores and Juan Rodriguez have made three(?) lines to its homage: Madura, Oscura and Connecticut. Today is some thoughts on the former, which uses Brazilian Aripaca over Nicaraguan and Dominican fillers. Our PDR expert mentioned these were a CI exclusive? What is Charlie Stahl smoking. I can say that I haven’t ever recognized these at a shop, although I imagine they were in Don Leoncio’s humidor in New Orleans.

The thick pigtail and the dark wrapper are what stand out. I will say the pictures do seem to overextend (at least the one’s up top in extreme sunlight) just how great the wrapper is giving it a lot more sheen and reds than it actually has. The black bands definitely add to the overall image, which is dark. Medium thick veins run across the dark capa which exhibits a decent amount of red. Packing is always on the really light side, while the sticks seem fairly firmer; odd as that is. I get cherry, woods and sometimes coffee. It’s either medium or mild depending on whether or not the stick is still in cellophane. (Let’s not have that debate.) From the foot, cocoa, espresso, black pepper and a foul pine note in the medium-full range. Lighting
The massive pigtail makes it through the top of the XV fine. Once it’s removed, the fact that this is a 38 RG becomes apparent. The PDR is a bit shorter than traditional El Laguito No. 1 measuring in it at 7 1/4 x 38, but the pigtail definitely makes it appear a bit longer. Aroma from the head is a full boxy mixture of red wine and sweet woods. Cold draw flavors from the 1878 Cubano Especial Capa Madura were all over the place. At times sweet woods and cocoa, one time it was a foul pine and a sour veneer that created the worst flavor I’ve ever had from a cold draw. Lighting tends to not be better, pine and rotting woods. The PDR’s first flavors tend to be timid cocoa, a woody note and a sweet cherry; medium-full. One time I got a finish of paint, wonderful. First Third
From the get go, it’s probably best that I point out that one of the four that I smoked had to be put down five minutes in. Ironically, it wasn’t the one that exhibited the paint finish. The foul pine that was in essentially one way or another apparent in three of the four PDRs was unbearable after five minutes, so I moved onto something smokeable. The other three were consistent enough to at least make judgments on, so keep reading I suppose. Cocoa, cedar and a touch of spice in the medium-full range. The Cubano Especial has an earthy finish with a bit of the rotten pine coming through, still a touch of spice; medium-full and short, which is arguably not a bad thing. While there is an aroma that isn’t great and the smoke production is only average, it does fall into the category where I would describe it as artisan in the nature that it runs down the Brazilian wrapper and escapes into the Carolina air. Second Third
It’s almost like a toasty cracker flavor at the beginning of each puff, a first for me. The rest of the PDR’s flavor profile is cocoa, herbs, oak and moderate spice to make an overall full flavor profile. In each of the cigars I started, the first third was an unpleasant experience, and while I don’t regret putting down the aforementioned pine-plagued example, the second third was remarkable in its recovery. The middle of the Don Leoncio Lancero had a consistent full oak, herb and spice finish that was lengthy, only adding to the surprise. Aroma is (fortunately) a generic toasty note with an unchanged smoke production. Draw remains a bit off-center, but still close enough to say “in the middle.” Strength picks up a bit, now in medium-full after a first third that hadn’t surpassed medium. 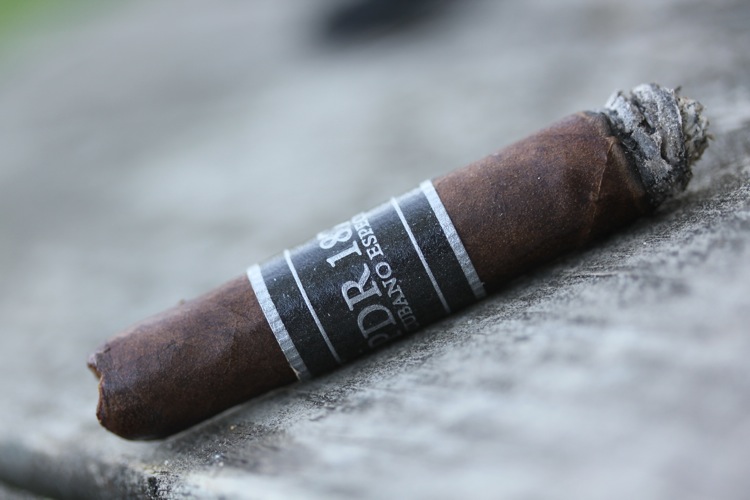 Final Third
It’s dull, it’s boring and it’s unfortunate. It’s a toasty oak note that is at least enjoyable, but the Pinar Del Río 1878 Cubano Especial Capa Madura Lancero doesn’t do enough. Finish is herbal, and it’s falling apart flavor-wise. Construction remains the same, still the same old inch long ash falling off whenever it pleases, usually on some portion of my arm. With about an inch left, it’s picking up in temperature and seemingly dormant in flavor, time to put it down.

For the Novice
The Lancero is naturally a stronger blend due to the size, although unlike other blends it rarely is amped up like, per se a 6 x 60, in terms of strength. Medium is about the lightest you get and there are few Connecticut or Cameroon Lanceros, meaning two of the lighter wrapper tobaccos are not generally used. If one blindly asked me how long I thought these had aged, i would have said a few years, easily; as I think they’ve begun to decline. However, these were introduced in the middle of last year, June if I recall correctly. They were however blended to be medium, which I think they achieve, as they only barely fall into the medium-full range in nicotine. I will once again avoid the full-on Maduro rant, but… Maduro doesn’t mean strong or dark, it means ripe. This cigar despite the dark and hearty wrapper, black bands and name is definitely not strong. In the End
Now that you’ve experienced your first el niño diablo PSA in a while, some parting thoughts on the PDR. I haven’t had any in any of the other vitolas, but I’m at a couple of conclusions. A. The Lancero vitola might not be a good idea for this blend. B. These don’t seem to age well. These were marketed as medium and as an outreach to the value-priced market; neither of which explained the cigar. I like Brazilian wrappers of both varieties, I like Lanceros, I like cigars that don’t try to be too much in terms of strength; unfortunately, I don’t like this.

66. The second third is the only part that peaked my interest, and I’m indifferent to whether it’s worth the (small) price of admission.