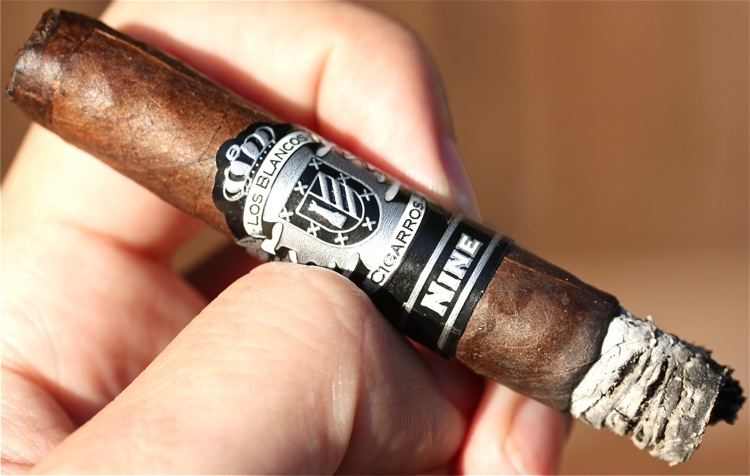 Today’s review would fall in the category os the lesser known, although this isn’t a huge secret. The Los Blancos NINE Lancero has been around since 2009, the blend itself since 2007, but these aren’t exactly a common sight in most humidors. The line has received little attention since its release almost two years ago, although it seems like chatter picked up right around IPCPR time last year. Perhaps we can do the same this year? 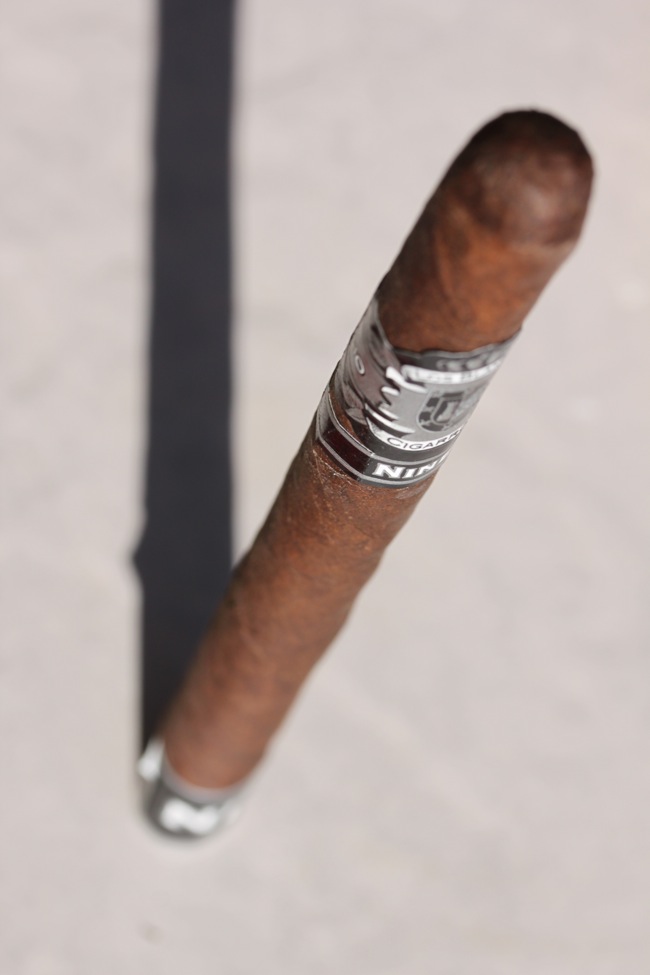 Today’s Smoke
The NINE fills a noticeable void in the Los Blanco line-up, i.e. full-bodied, full flavored and full strength. In order to get to that point on the scale, David Blanco and the Plasencia family use a Nicaraguan Habano Corojo Oscuro wrapper (add Connecticut, Cameroon and Candela and I presume you’ve got a big party) and three types of Nicaraguan Ligeros. This time Frank Flores III (also known as tx_tuff on Twitter, Las VegASH TV and a lot of the boards) gets to retell the story of the NINE:

Back in 2008, a good friend of mine spent a lot of time traveling between San Antonio and Houston . It was after one of these trips that he brought back some cigars he was excited as hell to share with me: The Los Blancos NINE. He told me his friend who worked at a cigar shop in San Antonio had blended it, and it was so good that the shop now carried the cigar. The funny part is, he said it was STRONG! I was doubtful and thought, “Come on . . . from Los Blancos?” Well he was right. It was a strong, flavorful cigar.

Forward to around this time last year. The 2009 IPCPR event had just happened and all over the cigar forums I was hearing about this awesome, new cigar from Los Blancos called the NINE. What? New? I had smoked that cigar over a year ago. In fact I still had one in my humidor, and I know I didn’t go to the IPCPR show! I posted as much as I could that these cigars were not new, but to no avail. Recently, I had a Los Blancos rep ask me if I wanted to review some of their cigars and post on a couple cigar forums. I jumped at the chance with the intention of telling the true story of the Los Blancos NINE and settling the matter once and for all.

So here, my friends, is how the Los Blancos NINE began. It started back in 2006 when David Blanco was giving away trips to visit his Nicaraguan factory in September of that same year. One shop in San Antonio , C.I.G.A.R., was part of this give away. They had decided to give some of the trips way to their most loyal members, one of them being a young man named Joe Torres. Not only was Joe given a trip for being a great member of his B&M, but he was also given a job at C.I.G.A.R. before he left for Nicaragua. (My friend Bo here in Houston also won a trip from David Blanco and Richmond Ave Cigars. I have to credit Bo because without him I would know none of this story.)

I recently talked to Joe Torres who is still working for C.I.G.A.R. in San Antonio as the manager of their new second location. Before the trip, Joe talked to the owner of the shop about blending them a house cigar once he got to Nicaragua. This was a big deal because even though Joe was a cigar lover he had never blended a cigar before. The owner gave him the go-ahead to try it out. The trip went as planned, and in September 2006, Joe’s dreams came true: he got to work with the Master Blender of Los Blancos Cigars. Knowing Spanish made it easy for Joe to talk to him and get his idea across as to what kind of blend he wanted. Unlike anything that Los Blancos made, Joe wanted a full body, full flavor smoke that would make you stand up and take notice. He enjoyed a lot of the full body cigars on the market, but at the same time he wanted something original and all his own. Joe told the master blender he liked full body cigars, so the blender threw one together for him in order to find out what Joe considered “full body.” After Joe pretty much laughed at that cigar being called a full body cigar, the master blender now understood Joe’s vision. He talked with Joe about all the different tobaccos they had, where they where grown, the strength of them, etc. With this information, Joe set to work blending cigars, using the Toro 6 x 50 size as his platform. After eight attempts at creating his perfect full body flavor, Joe finally achieved the blend he was after, and it was naturally called “the NINE.”

In order for Los Blancos to make the NINE for C.I.G.A.R., the B&M had to commit to a batch of 5000 cigars. Joe once again was able to talk the owner into it. However, the only catch was breaking down the NINE into four sizes. So the Los Blancos NINE started off as a C.I.G.A.R. exclusive in four sizes, Robusto, Double Corona , Toro, and Torpedo. Now they have added a new Lancero size to the mix. As soon as they hit the C.I.G.A.R. shelves in November of 2007, they became the number one selling cigar at the B&M, selling out in just 4 months. David Blanco set up a visit for the grand release of the new, sought after cigar. Once there, David sat down with Joe and told him he wanted to distribute his cigar nationally! Joe and David became partners which ultimately led to the NINE finally being released at the IPCPR show in 2009. With the Los Blancos NINE now getting ready for its 3rd year anniversary at C.I.G.A.R., Joe will be working with Los Blancos to get another cigar/cigars on the market. “We liked some of the other first eight blends and may tweak a couple of them. And we may also come out with something stronger,” he told me. So if the NINE isn’t strong enough for you, keep your eyes peeled for something stronger coming from Los Blancos thanks to the hands and palate of Joe Torres!

One little trivia note is that the original release of these featured a different footband, rather than “NINE”, the black band said “C.I.G.A.R.” The first thing you notice after the dark wrapper and band combinations is that the cigar doesn’t seem to be rolled straight. It’s not that noticeable in the pictures, but it’s quite unusual not only in the bumpiness, but also the overall crookedness of the roll. The Nicaraguan Habano Corojo Oscuro is extremely dark, although definitely not to typical Oscuro levels with a decent sheen and mild discoloration. It’s fairly veiny, but it seems more character-building than something that actually detracts from the overall profile of the Lancero. Aroma is a heavy chocolate over leather; direct and full. To the touch, it’s firm, likely due to the roll, which seems overly tight, much like a Cuban. It’s baker’s cocoa with a faint touch of herbs from the mixture of Ligeros, once again nothing but full. 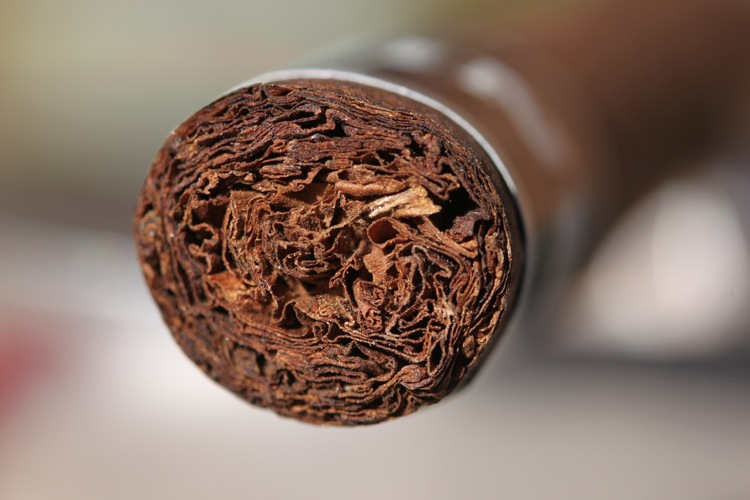 Lighting
Like yesterday’s Oliva Serie V Lancero, it’s a half inch shorter than a traditional El Laguito No. 1 and topped off with a round cap. Again, the Montecristo Signature Cutter, revealing an aroma of sweet brownie over earthy grass, as you’d expect full. The cold draw is a bit tight, but after taking off a bit more (to a slightly more normal cut) the draw is just slightly tight. Flavors from the cold draw are a bitter cocoa on top of nuts and orange peel, also full. Lighting is toasty cocoa and grass, fairly heavy despite the only average smoke production. The initial draw from the NINE is tight, starting with a dry earthy cocoa transforming into an earthiness, which adds a bit of spice before turning into cedar on the full and lengthy finish. 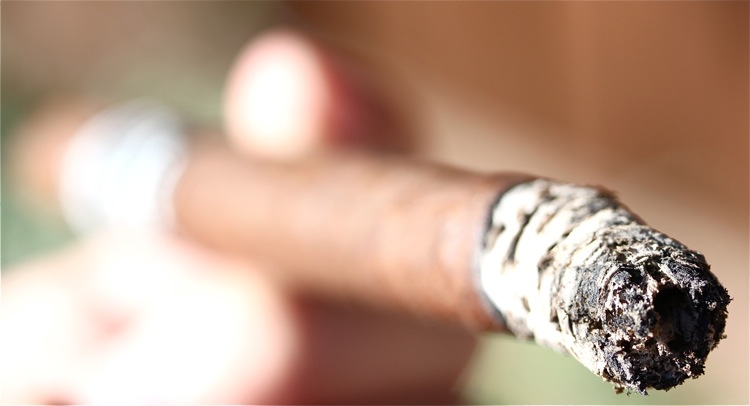 First Third
The Los Blancos’ core is cocoa and cedar with toasty earth, black pepper, harshness and herbs rounding out the full flavor profile. Finish is cedar and earth with pepper and harshness as secondary notes; full and lengthy. Draw is slightly tight, but given what the foot of the NINE looks like, this isn’t shocking. Burn is good, a bit of a sloping ash, but not really anything to actually complain about. Smoke production is a bit below average with a toasty and woodsy note fairly prominent in the Texas air. 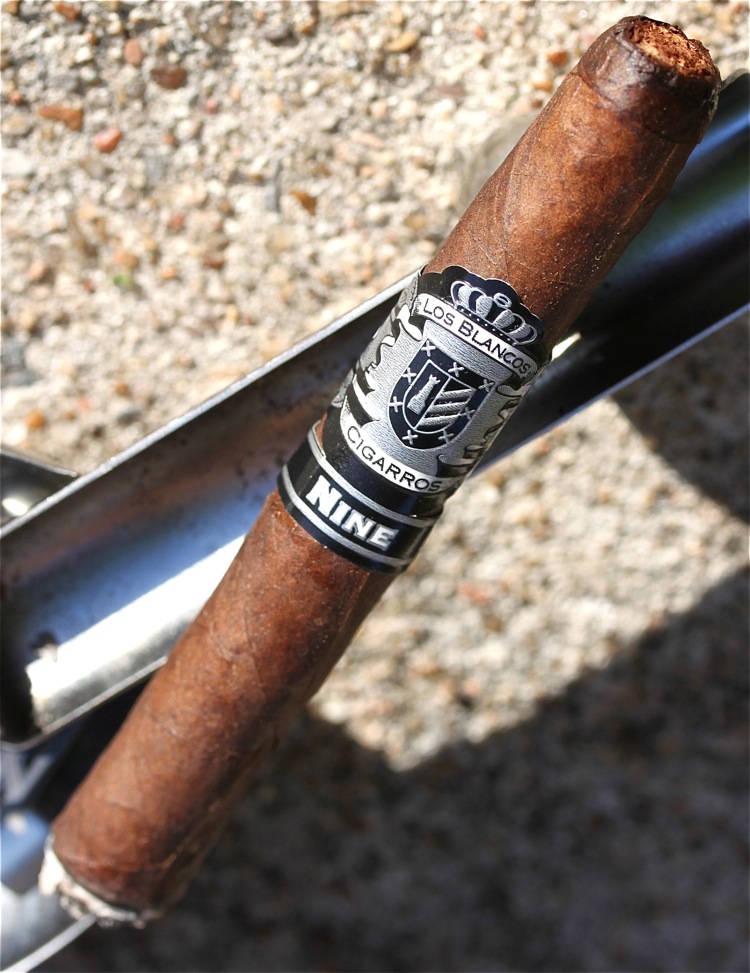 Second Third
The game of when do the draw tools become necessary seems to be a constant battle with the Los Blancos, an unfortunate reality of stuffing that much tobacco in a 38 RG. Flavor is still moving along beautifully despite the construction issues, now a leather and cocoa mixture over earth with red black pepper completing the slightly stronger rendition of full. Finish is a peppery cedar over leather, while full and lengthy, a taste that seemingly dies quickly but lingers at the back of the palate. Strength is always full by the time the second third of the Los Blancos hits, sometimes even getting out of the medium-full range in the first third. Aroma, with a distinct peppery note, continues to be strong despite a smoke production that nearly dies until the draw tool emerges.

Final Third
Battles with the draw seem to carry over into the final third. Flavor loses the cocoa and leather notes that had dominated the earlier portions with herbs, toastiness and cedar up front and spice notable lacking. The finish finds leftover cocoa notes and pairs it with cedar and citrus, every once in a while it seems a flowery note makes its way into the equation. Much of the rest remains the same: a bit over an inch of medium ash, good burn and a draw that could be improved. It’s relatively quick to the finish, about an inch left with an hour and forty off the clock, usually my place to end. 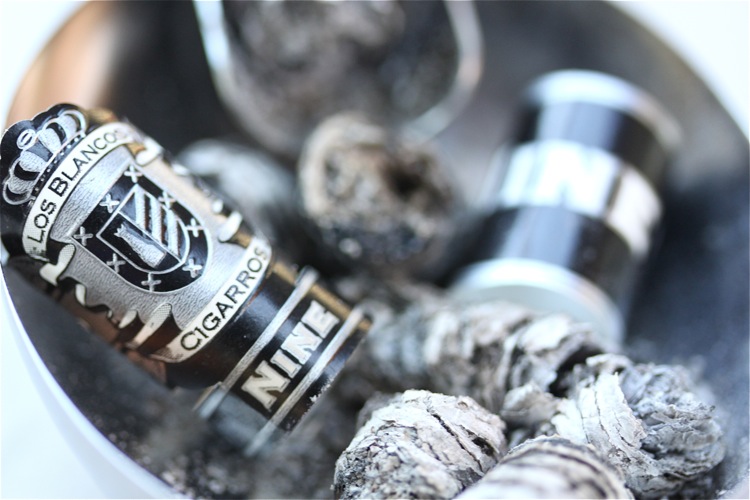 In the End
I mentioned in my primer on Lanceros that one of the largest aversions to smoking them for a lot of individuals is a tight draw. When I sit hear and begin to think of all of the little details, there’s only one real way to part with the Los Blancos NINE, some questioning on construction. A rough and crooked roll, filling that looks a bit much, a forty-five second puff requirement and a tight draw. These are consistent, and clearly very smokeable, but in a segment of the market that generally sits at a higher price point and is dominated by rolling masters like Pepín, anything not excellent becomes noticeable. Flavor-wise, this reminds me of what an Opus X Lancero should taste like: cedar, cocoa and pepper. It’s not as complex as a well taken care of Opus, but it definitely delivers the flavor profile better than the Phantom does. Still, construction is an issue that is beyond glaring, to me it’s something that needs to be addressed. The Los Blancos NINE Lancero is a cigar that is very close to being a necessity, but something must be done to address the draw, as it really detracts from all that the cigar has.

87. Believe the hype, this is a Lancero for the full smoker, just be warned, paperclips seem to be needed.