CAO has made a few Lanceros over the year, but a rather minimal amount considering the company’s time in the industry. I’m not really sure what the explanation was for not making them, but it seems pretty clear there was an aversion at the Nashville-based company. Now under the ownership of General Cigar Co., it seems even more unlikely that we will see a flux of Lanceros from the brand, but who knows. Like the Extreme and Mx2, the CAO Lx2 was once a Limited Edition; but unlike the other two, the Mx2 Lancero was eventually made into a regular production cigar. The Story
CAO introduced the Lx2 line at the 2008 rendition of the annual IPCPR trade show. It was the third version of the “x2” series which also includes the Mx2 and Cx2. The idea was Ligero (L) times two (x2) — get it? There were originally three formats of the LX2 introduced, the Lancero was not one of them. Eventually the Lancero would be offered in a limited edition Lx2 Lancero Humidor and then in March of 2009, CAO made the Lx2 Lancero a regular production cigar.

The Lx2 uses two different types of Ligero, Dominican and Nicaraguan, inside of a Nicaraguan wrapper. It’s a dark cocoa appearance with light and veins and a slightly rustic feel. Aroma from the capa is a nice aged leather with bits of coffee and earth; medium-full and very clean. Average packing and a bit hard to the touch, it’s not exactly CAO Lx2 is not exactly the shining moment of Lancero construction. From the foot, it’s an aroma of nuts, paprika, dark tobacco and wine; medium-full and pretty unique. Lighting
After removing the cap, the head shows off another interesting mixture of aromas: coffee, nuts, bit of earth and a sweet tobacco somewhere around medium. What’s astonishing is the lack of spice, but whatever the case. Cold draw is tight with nuts, herbs, cocoa and you guessed it, lots of red pepper rounding out the medium profile. Lighting the Lx2 produces a toasty nut with lots of pepper for the Carolina air, a forewarning. The first draw of the CAO is tight with an average amount of smoke. It starts with a spicy nuts transitioning into a cedar and the to a cocoa and nutty pepper before the spicy pepper closes the medium-full finish. A lot going on, and somehow all manageable.

First Third
Spicy cedar, a bit of nuts and an overwhelming red pepper at the front of the full profile. The finish is cedar, red pepper and tobacco; full and lengthy. Draw is very tight, a common problem with these, probably helping in the limiting of smoke production to average. The burn is good with an inch of dark grey ash holding on.

Second Third
The cedar remains up front with the pepper note being overtaken by a developing coffee note. There’s some earthiness, a bit of wine and some more generic woodsy notes as well to help round out the full flavor profile. The odd part of the CAO Lx2 is while some flavors are very developed (say the woodsy note), other’s are very unfinished, i.e. the toastiness. Finish sees more of the pepper, woodsiness and coffee on the still full and lengthy sides of things. Draw requires some poking at this point, it’s pretty consistently tight, dryboxing is a necessity and a helpful hint. Strength and body are still full, with the remainder of the construction portions of the CAO Lx2 unchanged from the beginning. Final Third
It’s a crap shoot. I have no clue how old each of the three of the Lx2 Lanceros I’ve had were, but they were all different. The list of flavors range from a bitter cedar and sweet coffee note, to an overwhelming red pepper. Whatever the case it’s going to be full and earthiness, coffee, leather and woodsy notes (in some combination) are what you should expect. Construction begins to fall off at about the two-inch range, but if you are careful it seems there is a lot of potential. Strength and body are still full and smoke production increases, even with a struggling burn and a draw that could be better. With about an inch and a half left, the smoke is just too warm. 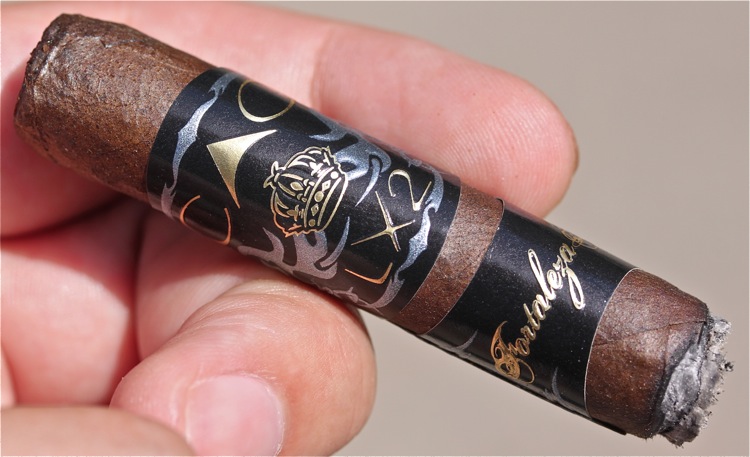 For the Novice
No. Are these super duper strong? No. Are these full? Yes. This is not the strongest of Ligero-filled cigars, but it’s strong. In the End
I’m not sure where to start. Consistency and balance are the struggling points here. Construction has its issues, but balance is a glaring area of concern. There are a lot of good things going on, they just aren’t arranged well enough in the Lx2. As many of you know, General has taken over CAO and recently announced that many of CAO’s lines were being made at different factories, although not the Lx2. This is not exactly a new phenomenon, as CAO shifted production quite a bit while they were independent. My main concern has to do with quality control. General and Altadis seemingly are years behind in the quality control department, which the rest of the industry is excelling at. It will be rather interested not to see if the blend changes (because I assure you that’s already happened once or twice), but how new Lx2 Lancero, particularly because of the vitola, fare in the coming months.

80. Price helps. These need more time, hopefully they won’t lose too much.