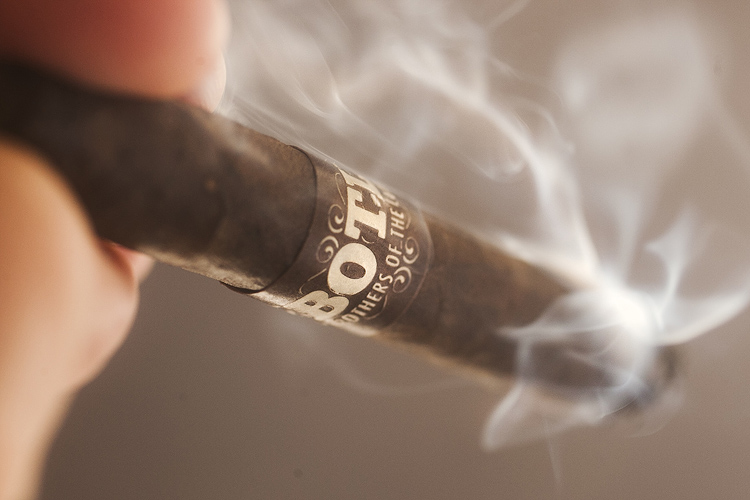 In July of 2010, Pinar Del Río released 4,000 cigars for the  BOTL.org (Brothers of the Leaf) forum. Dubbed the Pinar Del Río BOTL.org Small Batch 2010, the cigar was sold at Burning Leaf Cigars in Illinois, a store forum user Tim Podwika worked at.

In 2011, Podwika left the store to start Podman Cigars. He had been working on a Lancero blend at Drew Estate for quite a while. We first heard of it almost two years ago, when it was code named the “TP-1,” but we never knew what the blend was until it was formally announced that it was going to be the 2012 BOTL.org release. Only 200 boxes of 15 were produced with each box costing $194.25.

There have now been two releases for the BOTL.org forum. They are:

The boxes that the Drew Estate BOTL 2012 come in look like this: The cigar itself is well rolled with an imposing wrapper that is close to black in color with a copious amount of oil present. There is a great amount of give when squeezed and the wrapper smells very strongly of sweet barnyard, cedar, leather and black pepper.

The Lancero starts out the first third with sweet cedar, creamy leather, espresso and chocolate. The profile is astoundingly earthy and gritty all at once, not in a bad way, but in a way that really compliments the blend. There is a bit of sweetness in the background that I cannot place yet, just itching to get out and I am really hoping it gets stronger as it continues down. Even for a typical high-end Drew Estate cigar, smoke production is astounding, some of the most dense and blue I have seen. Both burn and draw are perfect from the start and that does not seem to be changing anytime soon. The overall strength starts out stronger then I would think and ends the first third at a solid medium. Coming into the second third of the BOTL.org 2012 and the sweetness in the profile has morphed a bit, until it has the distinct flavor of worcestershire: sweet, tangy and sharp all at once, a very interesting note. Other flavors of bitter espresso, gritty earth, leather are mixed in as well. Interestingly, the chocolate note from the first third has shifted to more of a baking cocoa note—less sweet. Construction remains excellent–both burn and draw are giving me no problems whatsoever. The strength has bumped up to a strong medium and I know it is going to go increase before the cigar is done. The final third of the BOTL Lancero continues the trend from the first two thirds with a wonderful combination of cherry sweetness, worcestershire tanginess, bitter espresso, cocoa and creamy earth. The construction finishes the way it starts: perfect. Overall strength ends just slightly below the full mark, but it is an easy cigar to nub, and stayed cool to the very end every time. As you may or may not remember, I was not the biggest fan of the L40, as I thought it was missing something in the profile that would have put it over the top for me. Well, whatever the L40 was missing, the Drew Estate BOTL.org 2012 found—excellent flavors, excellent complexity, excellent construction, excellent vitola and excellent finish. There is quite a bit going on flavor wise for the entire smoke, but the profile is incredibly well balanced with each note very noticeable, albeit at different strengths. Drew Estate has released some amazing cigars this year and this stands head to head with the best of them. Unfortunately, they are long gone now, but are well worth tracking down if you can find them. Just a wonderful cigar all around.