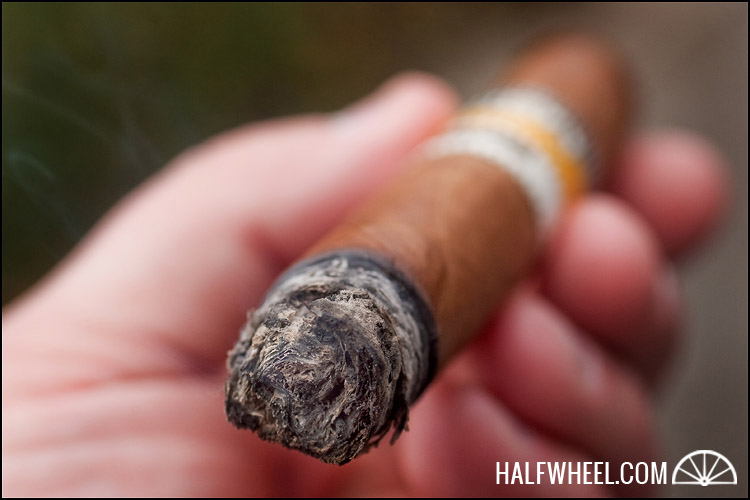 Pronounced be-he-kay, the cigar takes its name from the doctor/healer of the Taínos Indians, the native Cuban people who used the word “Cohiba” to refer to tobacco. The Cohiba logo uses a head of a Taíno Indian, a logo seen on the top of the Behike humidor.

When you start to name holy grail cigars, particularly modern renditions, this is hard to dispute as king. The project to celebrate Cohiba’s 40th anniversary actually began in 2001 and involved some of the most skilled cigar personnel in Cuba. Pancho Cuba, Antonio María Paz and the late Alejandro Robaina selected their best wrapper leaves from two years of harvesting at each of their three farms in Pinar del Río’s Vuelto Abajo. There’s some inconsistency in the (limited) literature on the Behike on whether the tobacco was aged for a minimum of five years or for an average of five years. Antonio Vázquez Romero, chairman of Altadis S.A. from 2005-2008, was quoted as saying the tobaccos were aged five to six years.

Without a doubt, the trademark feature of the Behike is its rolling process epitomized in the white secondary bands. Norma Fernández, the most senior roller at El Laguito and the same roller who rolled all the original the Cohiba 30 Aniversario Humidor Double Robusto, was tasked with rolling every single Behike, which were individually numbered by hand. The cigar was described as a mixture of the Cohiba Lancero and Siglo VI, i.e. it’s the length of El Laguito No. 1 and ring gauge of the Cohiba Siglo VI.

A picture of Norma Fernández can be seen here.

Only 4,000 Behikes were made, all released in Elie Bleu humidors. The massive humidors contained 40 cigars, meaning there were only 100 humidors released, each priced at €15,000, which was roughly $17,600 at the time of the release. The humidors were individually numbered as well, each containing 40 consecutive serials, meaning this example came from humidor no. 46. HABANOS S.A. presents the most exclusive and expensive Habano in the world.

March 3, 2006 (Havana, Cuba) — Corporación Habanos presented this morning the most expensive and exclusive Habano cigar in history, to be marketed in 40-unit containers, at a selling price of 15,000 Euros. The Cohiba Behike has the same length as the Lancero and the same girth as the Siglo VI, the two factory rings that have contributed to build the prestige of this brand. Corporación Habanos announced that this 4,000 cigar production lot is unique, for it will not be produced again.

Ever since Corporación Habanos conceived this project originally to commemorate the brand’s 40th anniversary, the project has remained completely secret. To that end, plants from the seed bed, the best growing fields of Vuelta Abajo, and even the best growers were selected. The outside wrapper leaf is made by Pancho Cuba, Alejandro Robaina and Antonio María Paz, three of the most prestigious growers in the world.

The careful selection and special care, the unique manufacturing process – all cigars have been hand-rolled by Norma, the most senior of the El Laguito cigar rollers – and the high quality production standards, give this Habano cigar unique characteristics. The 4,000 Cohiba Behike cigars will be sold in 40-unit containers – double-ringed and numbered from 1 to 4,000 – presented in 100 humidors made by the prestigious Paris-based company Elie Bleu.

This is a unique humidor, for its design and its materials: Galuchat, or manta ray skin, one of the most luxurious materials in the history of decoration; black ebony, mother of pearl, sycamore, cedar and ox bone. In certification of its exclusive nature, humidors will include a plate with the humidor number (from 1 to 100) the Cohiba Behike lot number it contains, and the owner’s name.

The price of each of these 40-cigar containers is 15,000 Euro, and will be sold only upon exclusive order to Habanos S.A. dealers.

This new vitola will be presented during the Gala Dinner of the 8th Habano Festival, which is celebrating this year the 40th anniversary of the Cohiba brand.

While the cigar would be announced in March of 2006, it wouldn’t be formally released until October 19, 2006 when it launched in Madrid. There’s an interesting story about Raffi Aboulia, owner of Raffi Cigars, who was actually the only retailer allowed to purchased a box at the VIII Festival del Habanoafter winning the raffle for the rights to purchase a box.

Habanos S.A. would later announce the Behike named would return with the 2010 launch of the BHK. (You can read the review of the Cohiba Behike BHK 54 here.) To be frank, the only thing these share is some part of the name and the same country. It’s not the same blend, not the same size(s), not the same tobaccos, not the same release type, not a limited edition (rather limited production), not a single roller and perhaps maybe at times not even the same factory. The Cohiba Behike and the BHK are two different cigars and while many haven’t heard of the former, if you think the latter had hype and mystique, you have no clue. The Cohiba Behike is huge in the hand, with a gorgeous light cinnamon brown wrapper that is more veiny then I expected. It seems perfectly constructed with a small pigtail on top and perfect when squeezed with just the right amount of give. The wrapper smells like sweet cedar and leather.

The first third starts off faintly bitter, with some black pepper, leather and wood in the first eight puffs or so. However, around puff ten of the Behike, the profile shifts abruptly with flavors of sweet cedar, vanilla and creamy leather. The draw is excellent, but the burn started off erratic, so I had to touch it up once. 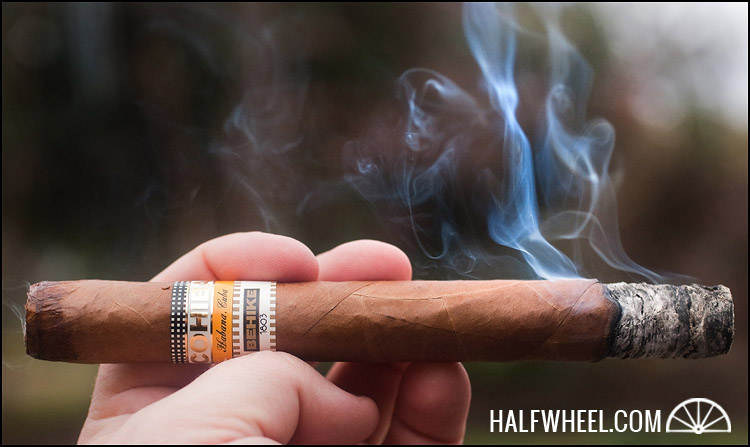 The second third still has an undeniable vanilla sweetness with some honey ebbing in and out as well, along with some white pepper, cedar and leather and slight nuttiness. Midway through and the Behike is still creamy, with a bit of a toast note as well. However, there’s no spice at all that I can discern and the strength of the Norma Fernández rolled stick is actually a mildish medium.

The final third changed a bit: toasty, earthy, and not as sweet as the first two-thirds. There was also quite a bit more spice than the first two-thirds, albeit not a whole bunch overall. Also, the burn really evened out in the Final Third, and was perfect to the end. No matter how hard you try, it is almost impossible to be totally objective when reviewing a cigar the caliber of this one. While there are almost no reviews online that I found, the price, background and mystique of this release are hard to deny. Having said that, this was a very good cigar, but not as complex as I was expecting considering the price and history. The draw and construction were great, and although the burn did have to be corrected a few times before the final third, and the flavors it did have were wonderful and distinct. Still an undeniably great cigar, but would I pay $1,500 for one of these? Not a chance. Honestly, from what I smoked, I would buy a box of Cohiba Gran Reservas instead (or even multiple boxes of Cohiba Lanceros) for the same money without a second thought.