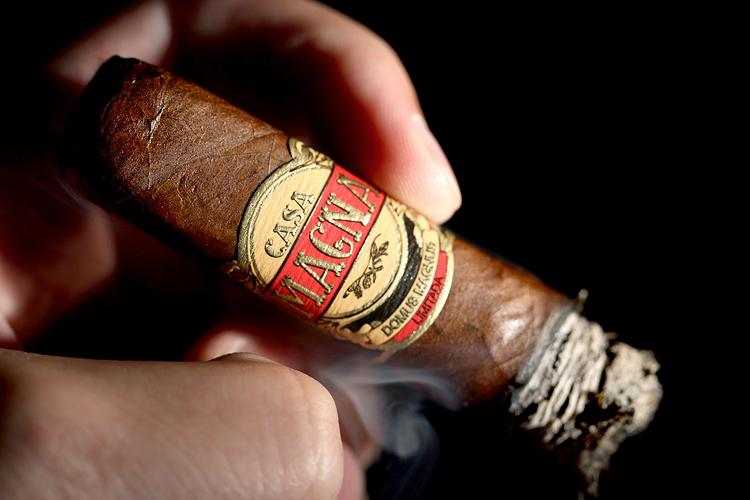 In October of last year, Terrence Reilly announced that SAG Imports would be extending its popular Casa Magna Domus Magnus Limitada line to include three new limited sizes. Originally thought as a January release, due to delays and backorders on the original two sizes, the new sizes of Domus Magnus shipped from SAG Imports on Monday (April 9, 2011).

The original Domus Magnus debuted in July of 2011, a limited edition follow-up to the award-winning Casa Magna line, a partnership between Manuel “Manolo” Quesada of SAG Imports/MATASA and Nestor Plasencia, who makes the cigars at his Estelí, Nicaragua-based Plasencia Cigars S.A.

The blend is a Nicaraguan puro with a dark Sun Grown wrapper from the Jalapa Valley covering the candy bar box-pressed shaped. Reilly described the blend to halfwheel last year:

We were looking for something that was powerful but without the (overwhelming) spice that many Nicaraguan cigars have. For me this cigar has solid strength, but its smoothness allows a lot of flavors to emerge.  A very complex cigar,  it was supposed to be a full line extension but some of the tobaccos turned out to be in short supply.  We loved it so much we decided to make it as a limited edition.

The Casa Magna Domus Magnus was launched in two vitolas last year,  Optimus and Maximus, with 5,000 boxes of 10 cigars made for each size.

With the addition of the three new vitolas, there are now a total of five Casa Magna Domus Magnus:

Four of the five vitolas are parejos with the lone exception being the Bellatores. Aroma off the wrapper of the Domus Magnus isn’t very strong, likely from the fact that these haven’t been in a box in a while. There’s a medium leather, some earth and a touch of barnyard from the Jalapa Valley tobacco. The foot is better, tons of earth and herbal with some acidic leather, a sharp contrast measuring out very full. Cold draw is a bit mushy with the Domus Magnus providing a dry bittersweet cocoa, earth and red wine. There’s not any up front spice, but there’s a bit of a cloud that hits the palate close to the finish.

The first third of the Centuriones starts with a lengthy journey that sees a blast of black pepper, earth, cedar and a spicy green pepper. It’s medium-full, starting bold and hearty and becoming more bittersweet as the profile moves on. Despite what ever Terence Reilly claims, all three of my Centuriones started with waves of pepper over a bit of earth. Eventually, the Domus Magnus settles to a mixture of earth, a calmer red and black pepper mixture, dry leather and a bold roasted coffee note that really shines on the finish. Flavor is developed, full and event a bit bullish. Into the second third and the strength seems to let up, going from full to medium-full. Flavor-wise, the Domus Magnus gets much smoother with a hearty earth core surrounded by a bit of cedar, a plethora of pepper, some young tobacco and a raw nuttiness. While the construction was great in the first third, the cigar seems to need a bit of encouragement to stay lit. It never goes out, but without a few touch-ups around the sides, it surely would have. Across all three samples I smoked, there was no need to ever touch up the Centuriones from an evenness standpoint, although it wasn’t dead-on perfect, but all three needed help staying lit, even with dry boxing. The final third sees the return of the coffee, now joined by a creaminess and a hearty and fully developed nuttiness over some cocoa, leather and earth. For the first time in the Centuriones profile, the pepper is now solely relegated to the finish, which allows for some more complexity and continues the trend of making the cigar smoother, although now it’s also become sweeter. I try to go as far down as I can, but eventually the smoke production gives out. The Bottom Line: Domus Magnus is a good cigar. Easily the most complete cigar that I’ve smoked from any of the SAG Imports family. For me, the Domus Magnus has always been quite easy to describe: a good full Nicaraguan cigar that seems like it’s got some age. While I don’t actually think it has that much age, particularly when compared to some of its competitors, it provides an experience that would suggest otherwise. So here’s the question: are these better than the first release? No, I actually think they are as identical as can be. The size is a bit different, which changes things, but overall, the Centuriones young seems to be right alongside the young Optimus and Primus, and that’s a good thing.