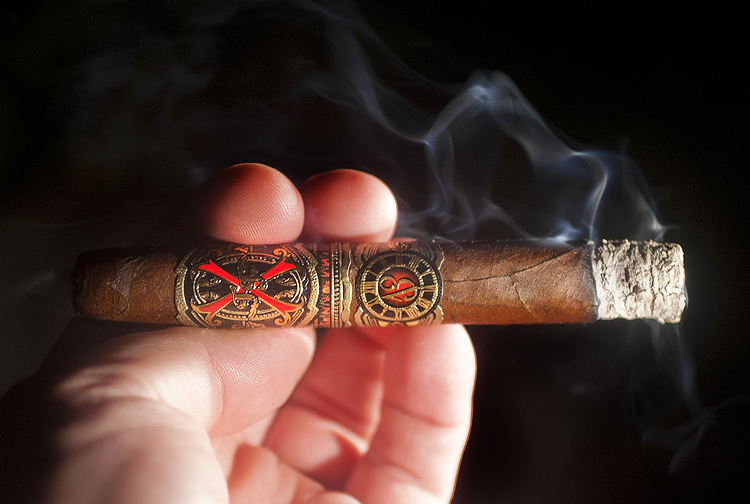 Midway through December of 2011, select Fuente retailers received a surprise release of a brand new ForbiddenX blend to celebrate the 100th anniversary of the Arturo Fuente brand. Each box contained 13 cigars, and all had a secondary band with the number 13 inside a clock face on it. Fuente recently shipped a smaller second batch to retailers in June and confirmed at IPCPR there is at least one more size, confirming one more release.

Here is what I wrote in my original review of the Fuente Fuente OpusX ForbiddenX 13 Nacimiento 1912 back in January of 2012:

I have not been overly impressed with most of the new releases that Fuente has put out recently, so I was not sure what to expect with this blend. What I got was a strong, sweetish, flavorful and fairly complex cigar. Unlike the Lost City blend, which I think blows monkey chunks, no matter what vitola, I think this blend has quite a bit of potential if given a few months (at least) to correct the burn problems. There were multiple problems with the construction and the bitterness in the second third was disconcerting, but honestly, I attribute problems to the fact that they are pretty fresh cigars. I am quite glad I got a box to put down for a while, and I would highly suggest buying some to age for a while, if you can, as I think these can only get better.

Like the first time I reviewed this cigar, the OpusX Nacimiento 1912 is a wonderfully rolled cigar with a medium brown wrapper that has a noticeable reddish tint to it. The cigar is slightly box-pressed and is hard as a rock when squeezed with almost no give at all. In this vitola, the two bands (a black Forbidden X band with a red “X” and a secondary band with the number “13” inside a clock face) take up almost half of the total length of the cigar. The wrapper has a bit of oil present and smells strongly of raisins, cedar, leather and a bit of pepper.
The Fuente Fuente OpusX ForbiddenX 13 Nacimiento 1912 starts off with some strong flavors of hay, sweet raisins, espresso and dark chocolate with a great amount of spice on the lips and tongue. Flavors morph into more of a creamy oak and earthy profile in the second third with a noticeable amount of cinnamon on the finish. The profile is extremely rich, almost cloyingly so, but the flavors combine extremely well together. Despite the fact that the cigar is hard as a rock when squeezed, the draw as perfect from the start, and the burn was spot on for the entire smoke. Smoke production was surprisingly abundant, especially for such a small vitola. The overall strength started out in the medium range, and rose to end at just under the full mark by the end of the cigar. The final smoking time was quite a bit longer than I expected, at one hour and 10 minutes.

One of the most repeated tenants of cigars is that most OpusX cigars get quite a bit better with some age on them. I agree with that for the most part, and while I think that will prove to be the case with the Fuente Fuente OpusX ForbiddenX 13 Nacimiento 1912, six months is just not enough time to judge how they will ultimately age. Other than the lack of bitterness and the greatly improved construction, the flavors and profile seems to be virtually identical to my notes and what I remember from the original review, which is a very good thing—but if you were expecting something drastically different, you would be disappointed. Having said that, these are going to have to spend some more time—perhaps a lot more time—in the humidor, before they change flavor profiles drastically, either for the better or for the worse.