Back in late 2010, Smoke Inn released the first entry in its Microblend Series, a series of different cigars from different manufactures with no discernible similarities beyond the exclusively to the South Florida retailer. While the series now includes 14 different cigars that have either been released, there was a three year gap between this and the previous release.

That cigar is a Dunbarton Tobacco & Trust creation named Red Meat Lovers, a 6 x 56 vitola that is made up of a Connecticut broadleaf wrapper covering a Mexican San Andrés negro oscuro binder and a mix of filler tobaccos sourced from Nicaragua and Pennsylvania. As the name indicates, the release is a collaboration between owner Steve Saka’s Dunbarton and a South Florida-based organization named the Red Meat Lovers Club, which is a group built around a shared love of all forms of meat.

To that end, the Red Meat Lovers release was specifically blended by Saka to be paired with beef.

“Cigars and steaks go hand in hand, but to my knowledge, no one has ever actually developed a blend specifically created to be enjoyed intentionally together as a ‘pairing,’” said Saka in a press release. “You would think this would be a rather straightforward task, but I took the responsibility very seriously in the selection of the various tobaccos to best compliment the hearty nature of the beef.” 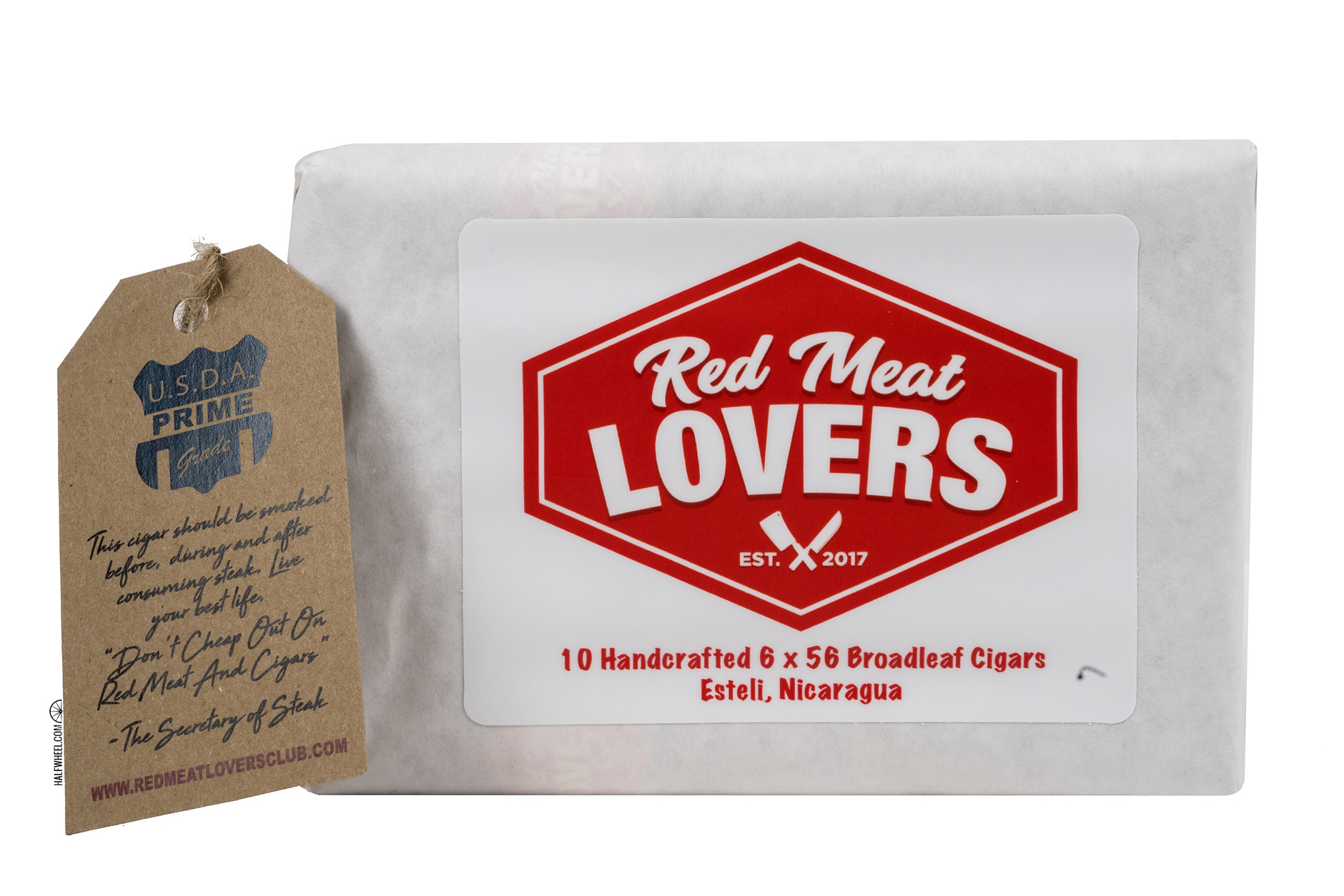 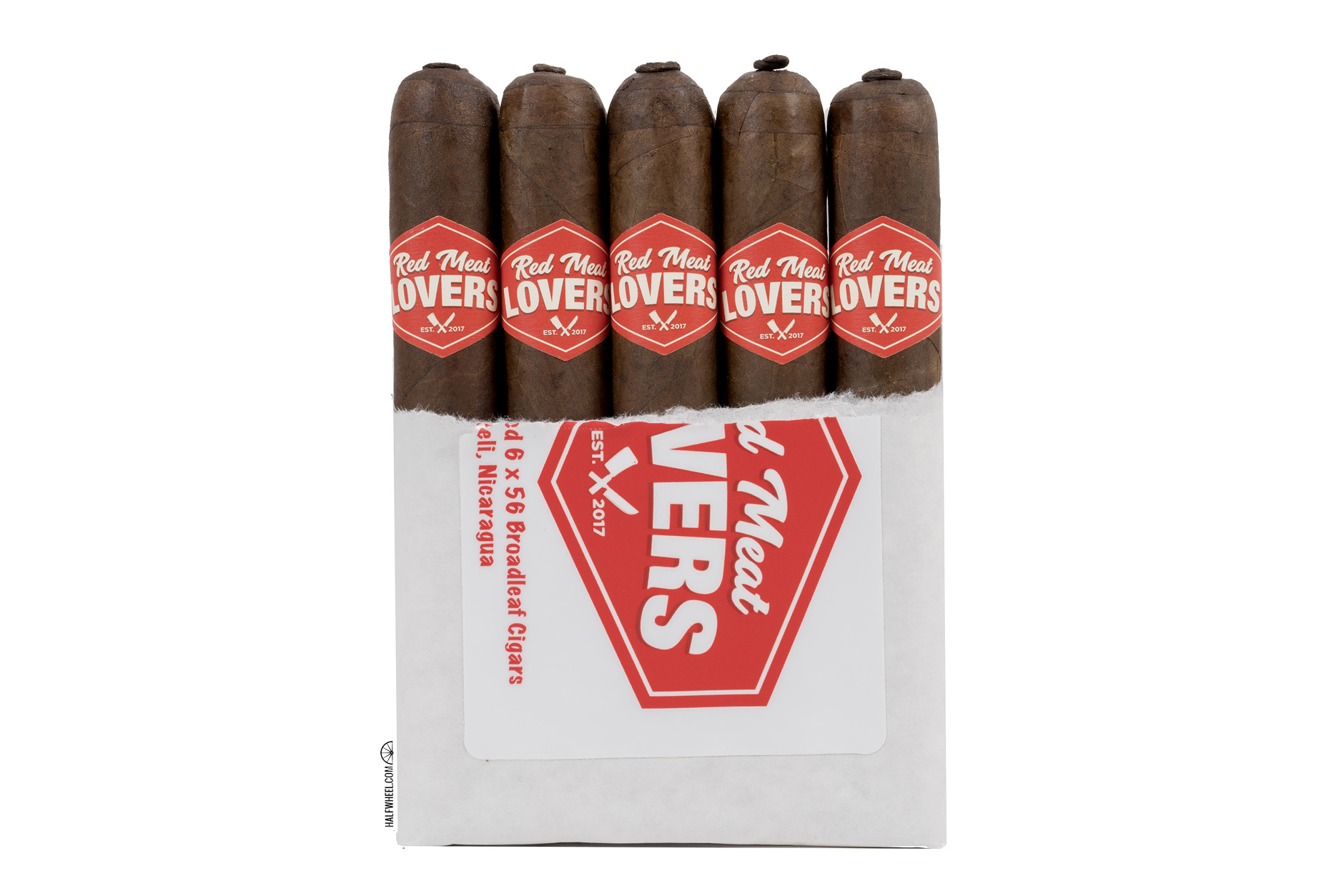 The cigar was rolled at Nicaragua American Cigars S.A. and was limited to a total production of 5,000 cigars packaged in bundles of 10, with each cigar carrying an MSRP of $11.95. They were officially released during a steak dinner on Jan. 17.

There have now been 14 different releases in Smoke Inn’s Microblend Series. 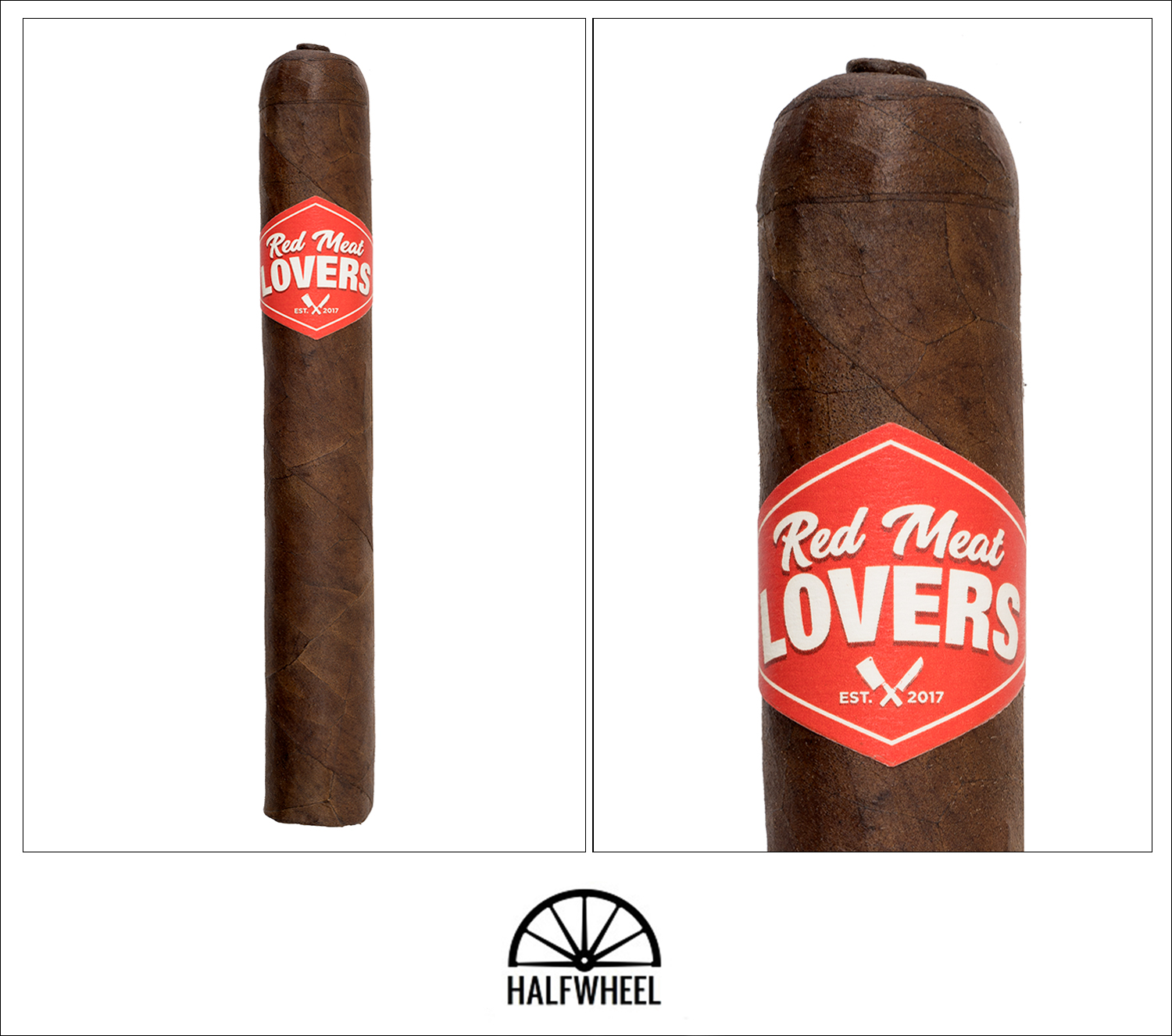 Visually, the Red Meat Lovers is a sight to behold: covered in a reddish brown wrapper that has some slight tooth and quite a bit noticeable oil, it is so dense that I was surprised by how heavy it was just about every time I picked it up. There are very few overt veins and the pigtail on the cap is so small compared to the size of the cigar that it would be easy to miss if you are not looking for it. Aroma from the wrapper is a combination of earth, nutmeg, cinnamon, leather, manure, cedar and black pepper while the cold draw brings flavors of sweet oak, leather, bitter chocolate, spice on my my tongue and slight citrus.

I am surprised right from the beginning of the Red Meat Lovers, as the first third starts with a very strong combination of creamy oak and cherry sweetness on the palate, interspersed with notes of hay, cocoa nibs, gritty earth, leather and salted peanuts. There is a noticeable amount of black pepper on the retrohale as well as some spice on my tongue, but both remain strong enough to be a major part of the profile. In addition, I am picking up some floral notes on the retrohale that seems to be getting stronger as the first third continues. In terms of construction, the burn and draw are excellent so far, with neither giving me any major issues, while the smoke production is massive off of the foot. Strength-wise, the Red Meat Lovers starts off lighter than I expected, but still ends up well on its way to the medium mark by the time first third comes to an end. 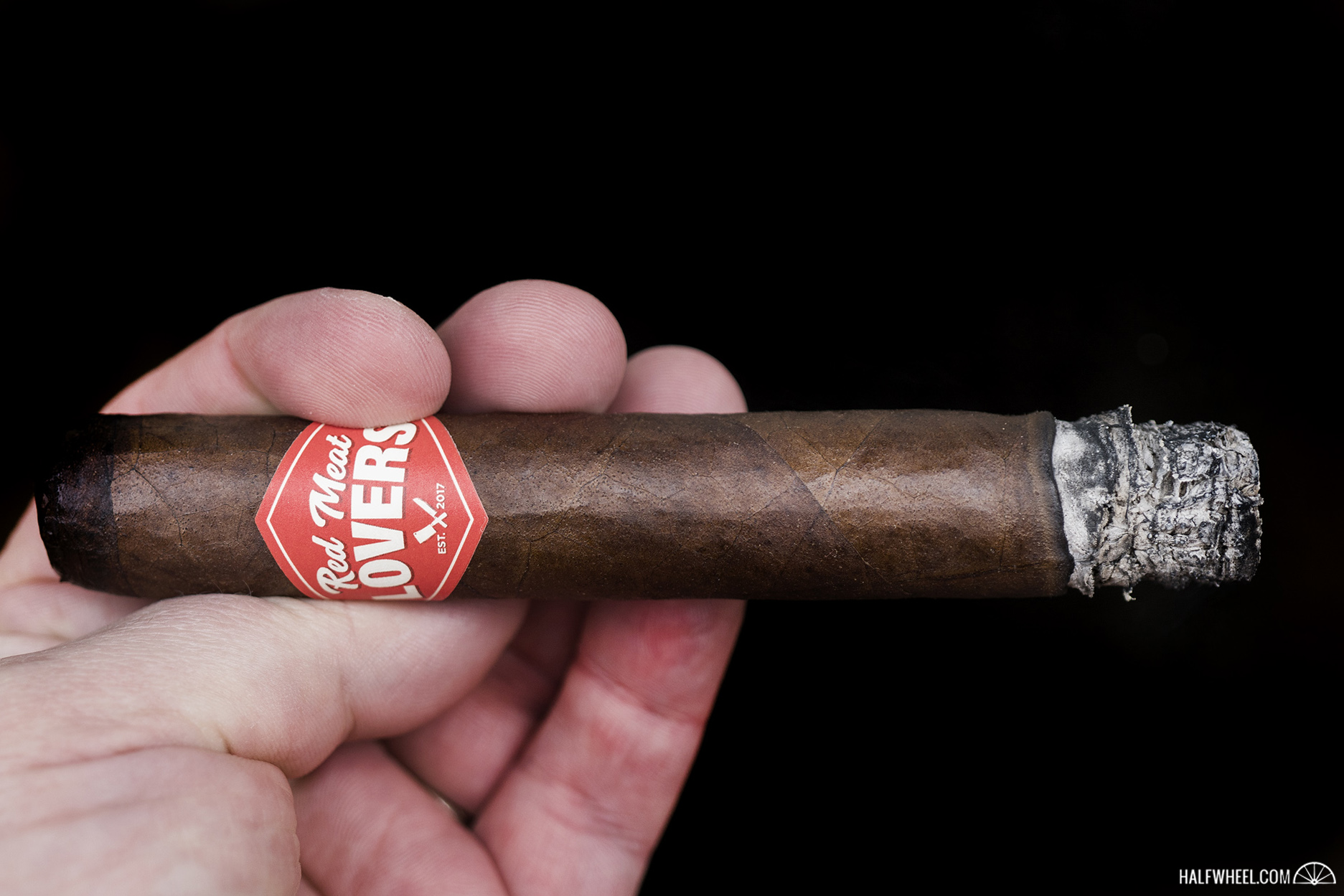 Both the cherry sweetness on the palate and the floral note on the retrohale are still very strong players during the second third of the Red Meat Lovers, while the creamy oak from the first third also continues to dominant the profile. There are a couple of new flavors as well—namely cinnamon and coffee beans—that combine nicely with other notes that are flitting in and out including gritty earth, hay, bitter dark chocolate, leather and a touch of citrus. Both the black pepper and the spice from the first third have receded a bit compared to the first third, allowing all of the flavors to meld together a bit more. Construction-wise, the draw continues to impress, but the burn becomes problematic enough that I have to touch it up twice, while the smoke production continues to come off the foot like a grass fire. The overall strength continues to increase—albeit slowly—hitting a point just above the medium mark right before the second third ends. 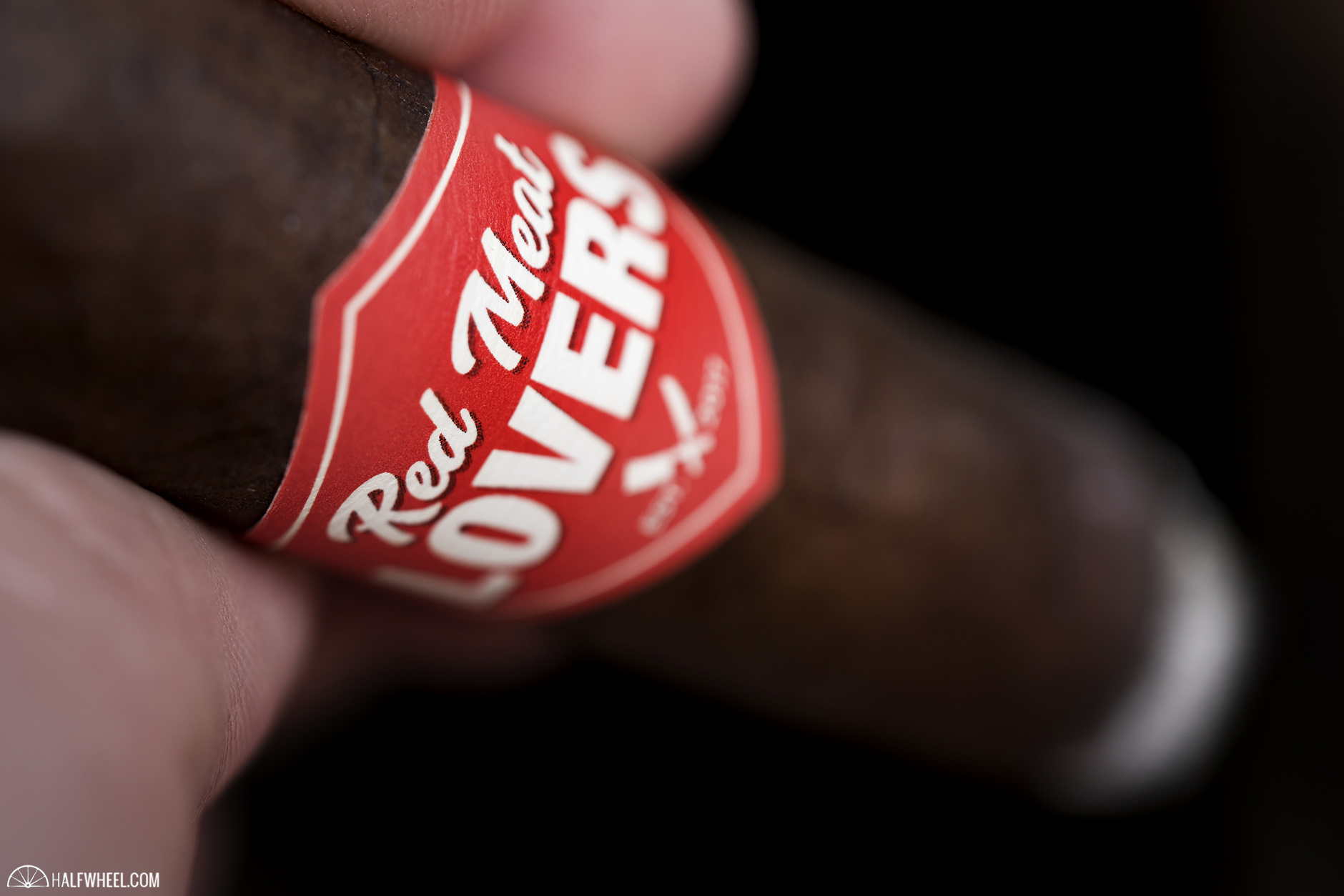 The final third of the Red Meat Lovers continues the trend of the first two thirds in terms of the profile, with the same creamy oak and cherry sweetness on the palate, followed by additional flavors of gritty earth, powdery cocoa, coffee beans, barnyard, leather, peanuts and very slight citrus. Both the cinnamon and floral notes from the second third are still very much in evidence, but the black pepper on the retrohale continues to recede from its high point in the second third. The draw remains excellent while the burn has thankfully evened up nicely, meaning neither need any attention from me. Finally, the overall strength easily hits the full mark by the middle of the final third but stalls out there until I put the nub down with a little more than an inch left to go. 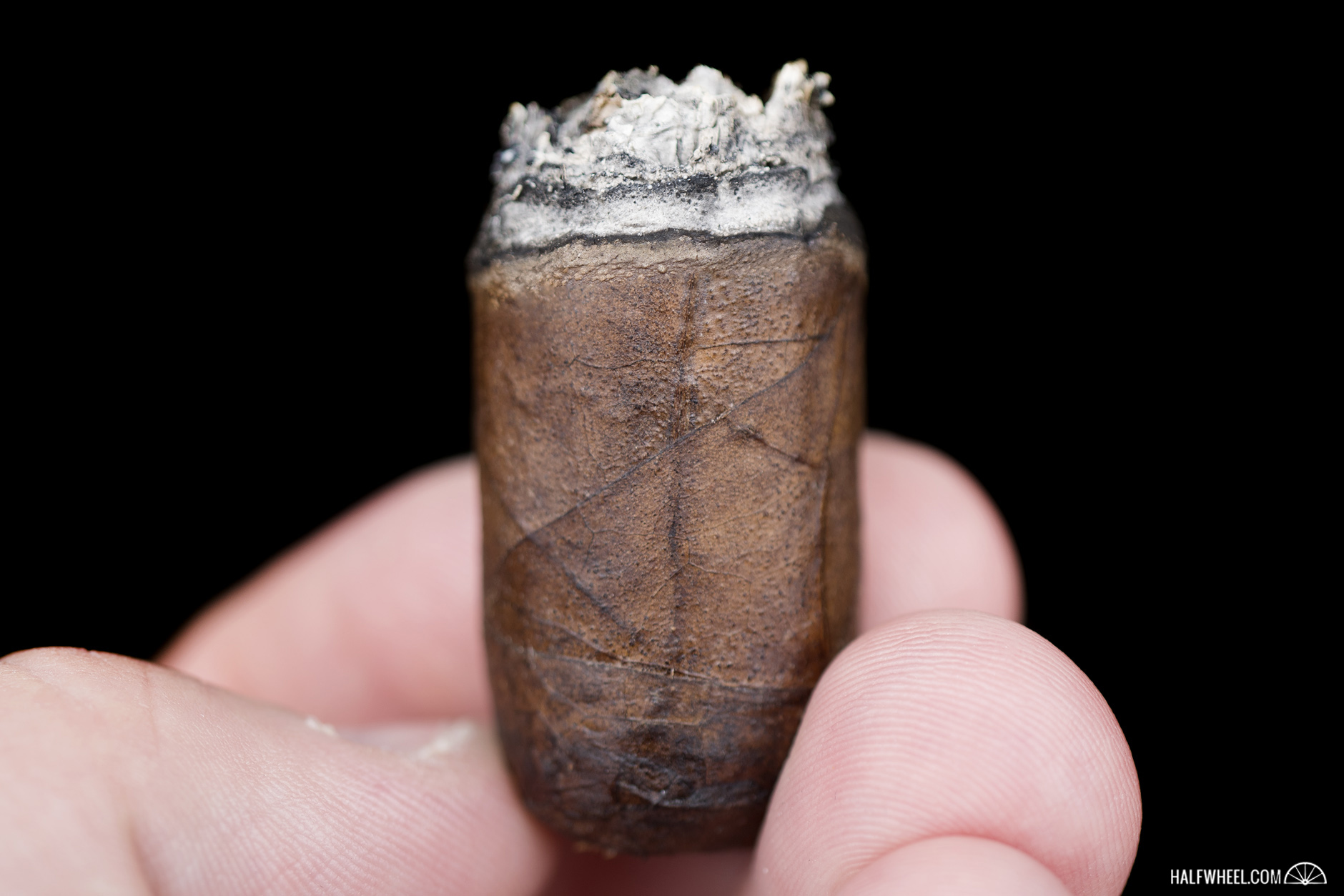 If you had asked me one word that I thought I would describe Red Meat Lovers profile before I smoked it, restrained would have been near the very bottom of the list. And yet, that is exactly what the profile is, at least for the first two thirds. While there are plenty of flavors—dominated by creamy oak and cinnamon—virtually all of them play very well together, and the combination of cherry sweetness and fleeting floral notes were a welcome surprise. In fact, the dichotomy between the name and the profile is so wide that I wondered at multiple times while smoking these if Saka had named it ironically. While those seeing the name and are looking for a overwhelming, hard-hitting powerhouse from the first puff will be surprised with what they get, anyone looking for a well-rounded, nicely balanced blend will be just as surprised with how much they enjoy it.