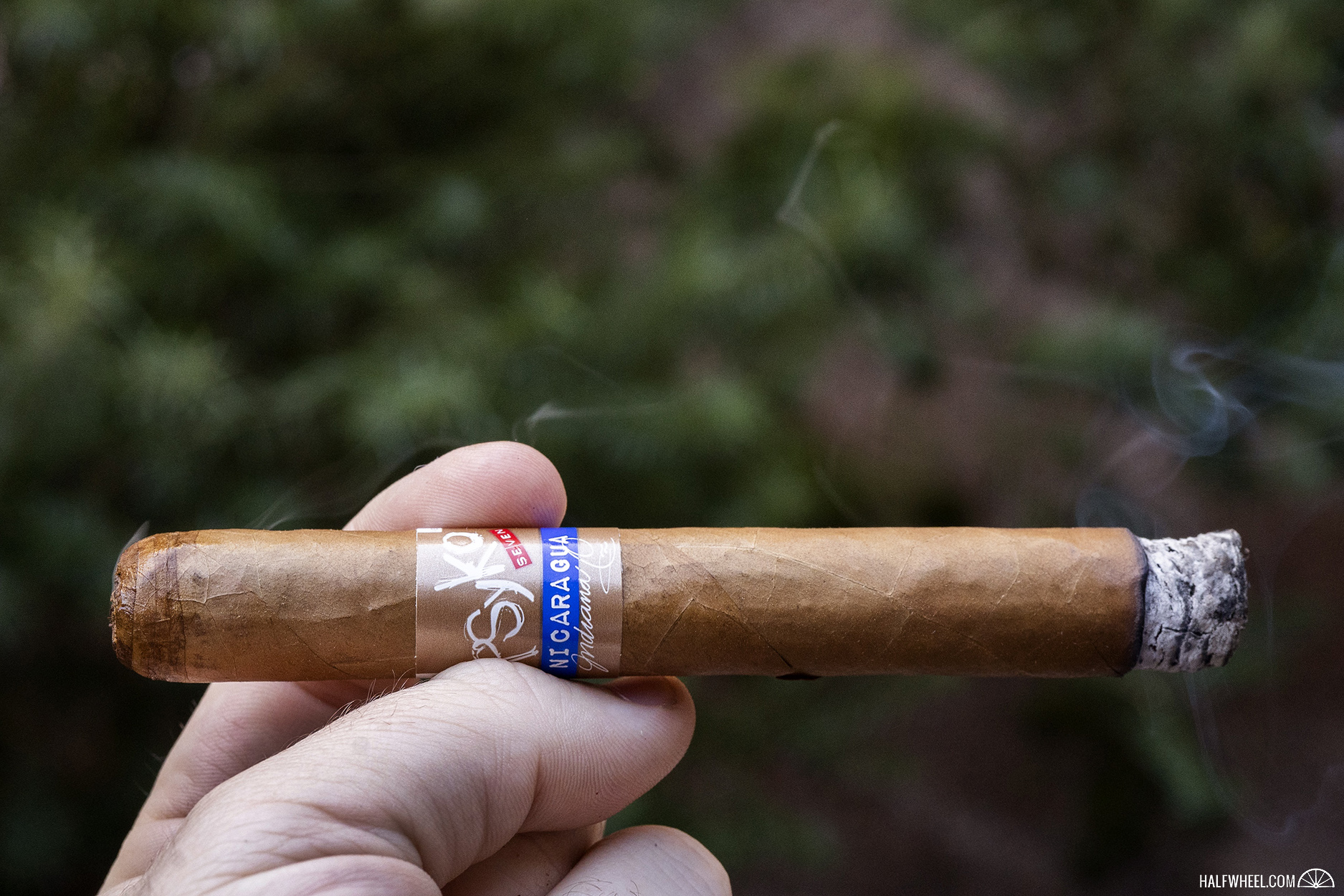 If you’re one to follow trends in the cigar industry, Nicaragua Connecticut is one that you’ll want to keep a close eye on in the coming year.

The leaf is being used for a number of projects that are arriving on the market, as well as one that came out earlier this year, the PSyKo SEVEN Nicaragua Toro from Ventura Cigar Co.

For the blend, the company once again turned to Indiana Ortez, the daughter of noted cigar maker Omar Ortez and an up-and-coming cigar maker in her own right. She blended the Fathers, Friends, and Fire Father & Daughter cigar that was released in June 2018 as part of a larger series launched in 2016.

She selected a Nicaraguan Connecticut desflorado wrapper leaf from 2007, and while desflorado sounds fancy, it is simply the Spanish word for deflowered. Tobacco farmers often remove the flower and seeds from a tobacco plant so that the majority of the nutrients go to the leaves and produce a stronger, more pronounced flavor. The binder is a Nicaraguan leaf from an undisclosed region and the fillers come from the country’s Condega, Estelí and Jalapa regions.

The line is produced at the Ortez family’s factory in Condega, Nicaragua and is available in three sizes:

The line made its debut at the Tobacconists’ Association of America (TAA) Meeting & Convention in March before shipping to retailers nationwide April 1. It is the second extension to the PSyKo SEVEN line, joining the PSyKO SEVEN Connecticut, which uses an Ecuadorian Connecticut wrapper, Dominican San Vicente binder and an undisclosed filler. That line was launched in Nov. 2016. The original PSyKo SEVEN debuted in 2013 and features a Dominican hybrid wrapper, Mexican Sumatra binder and fillers from the Dominican Republic, Mexico, Peru, Honduras, the United States and Nicaragua. 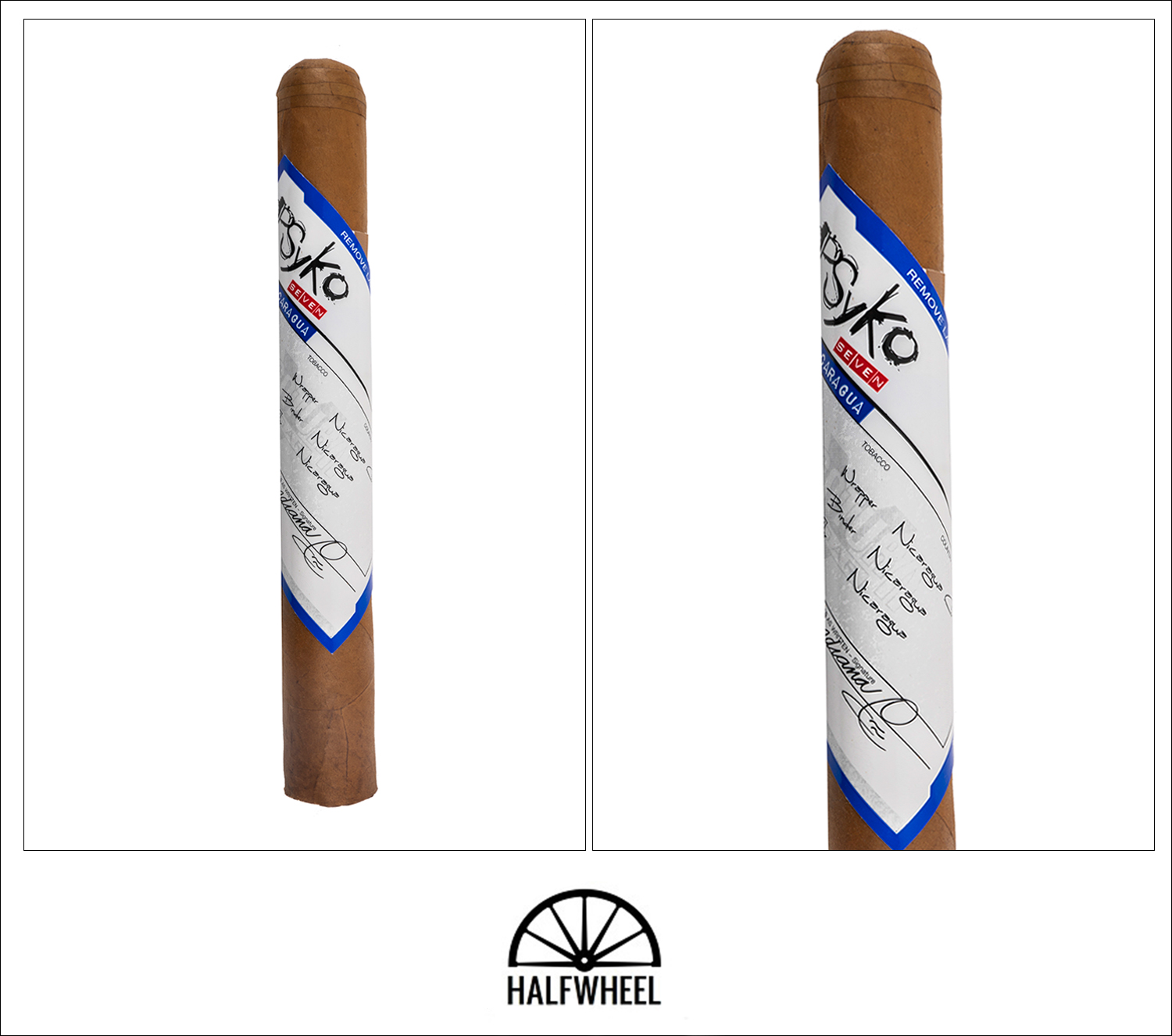 The rather large band that covers the PSyKo SEVEN Nicaragua Toro includes an instruction to remove it prior to lighting, so I do so and am rewarded with a beautifully tanned Nicaraguan Connecticut wrapper. It seems like a color that I don’t often see on cigars, which makes sense given the relative rarity of such leaves being used on cigars. It’s a fairly firm cigar, and while it has some give, I’m inclined not to squeeze it too hard given that the Connecticut wrapper still seems a bit on the thin and delicate side. The foot offers a fairly light but fragrant cereal note, with just a bit of dairy sweetness. One sample has a bit of a latte aroma to it by way of an aroma of foamed cream. The cold draw varies on each sample: one is too loose, one is too firm and one is pretty ideal. Creaminess is a constant across the samples, though it’s not always the same exact expression. One has a bit more of the latte flavor, though this time as a room temperature drink that has had ample time for the flavors to commingle, while one is more subdued and yields to a flavor of mixed nuts.

The first puffs of the PSyKo SEVEN Nicaragua Toro are more Connecticut than Nicaragua, though that situation quickly rectifies itself as pepper cannonballs into the equation within five minutes of the cigar being lit. Retrohales are surprisingly bright, almost biting at times at the pepper really hits the senses with precision and force me to space them out more. As the burn line makes its way through the first third, the pepper dials back a touch and allows a subtle creaminess to emerge. It gives the cigar some complexity though it feels like balance is still a bit off as pepper and wood feel like they pull in opposite directions at times. It’s a profile that ends up doing a bit of hopscotch between medium and full, settling on medium-plus by the transition with good technical performance thus far.

The second third of the PSyKo SEVEN Nicaragua Toro still seems to be finding its sweet spot in terms of getting all the flavors to harmonize, but it is getting closer. A bit of creaminess emerges just ahead of the midpoint and helps this process, giving the cigar some added depth and complexity without affecting the balance. There is still a fair amount of wood to the profile, which while familiar can at times feel like it’s a bit too vibrant for the rest of the profile. Touches of earth begin to emerge as well, a flavor that shouldn’t be surprising given that this is a Nicaraguan puro, and just past the halfway point it really begins to command the profile. While the profile had found some smoothness, the robust earth quickly spins the direction around and the flavor can now grate on the palate when at its fullest. A bit of burnt butter jumps in the profile as the second third comes to a close, a slow-burning section with the draw getting firmer and combustion decelerating without much explanation, even though smoke production remains quite good. 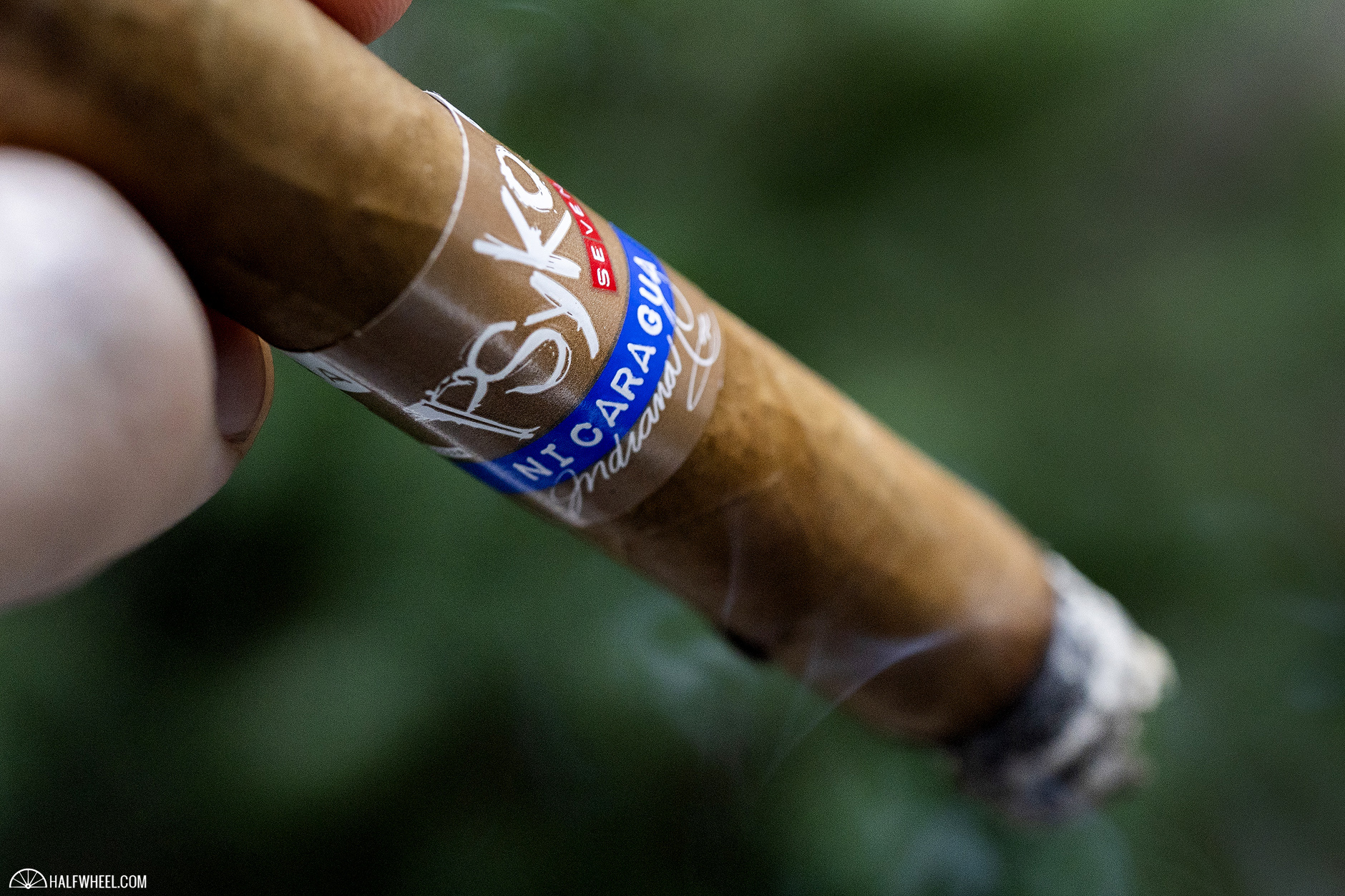 A retrohale taken during the transition into the final third shows that there’s still plenty of pepper to be found through the nose, providing a way to intensify the experience if what the tongue gets seems to be lacking. The big, occasionally brash earth notes from the second third have backed off quite a bit, which helps the PSyKo SEVEN Nicaragua Toro get back to the better profile it exhibited in the front half of the second third. There’s still a good bit of creaminess setting the base for the flavor, though the earth is a bit more mineral-forward and the white pepper leaves a healthy tingle on the tongue, occasionally turning a bit biting, a sensation that manifests more after an exhale. Other than some issues with the wrappers, none of which became problematic, the cigar has performed very well. 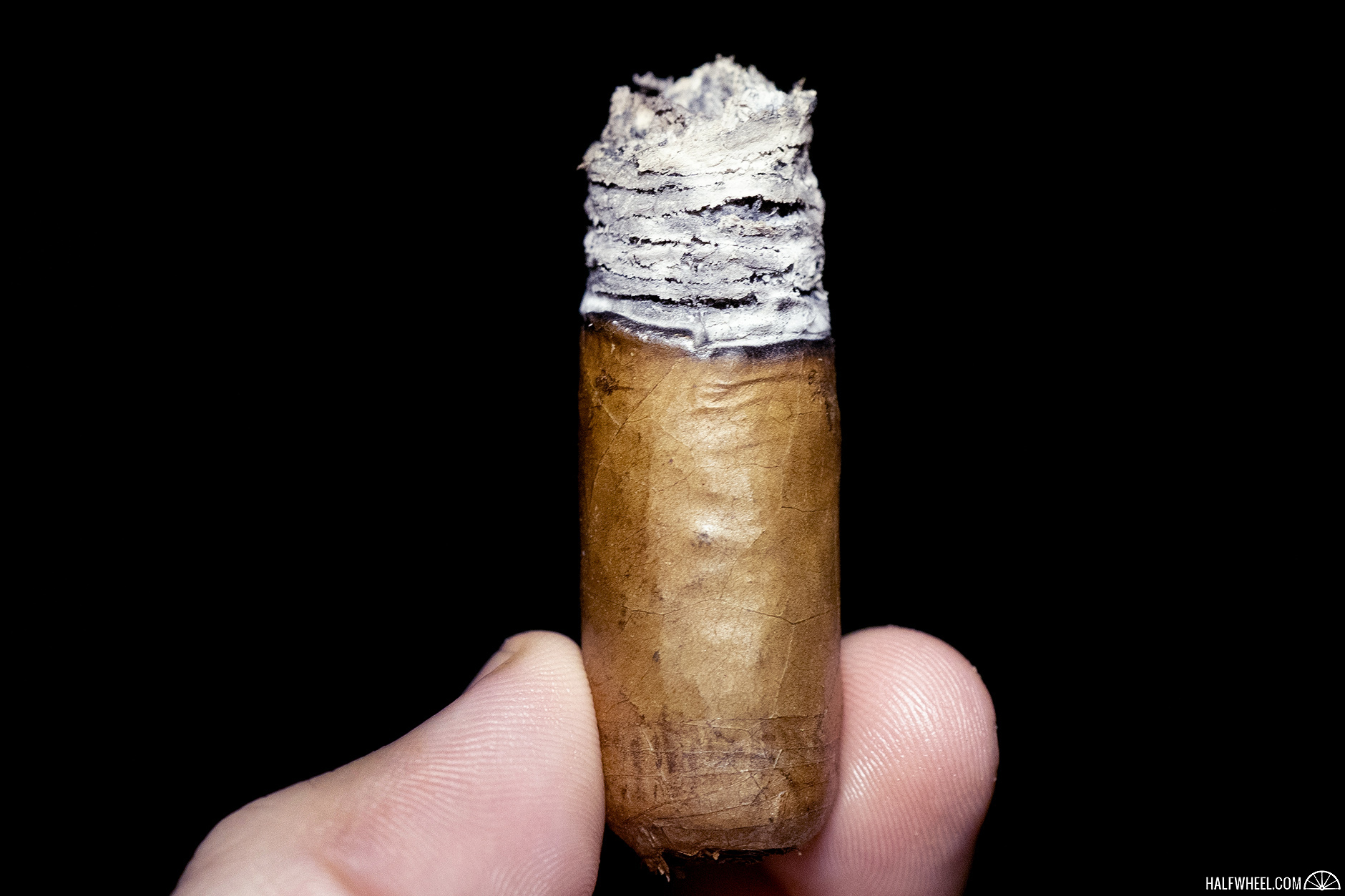 I was intrigued by the PSyKo SEVEN Nicaragua Toro for two distinct reasons; first, to experience more of the new wave of Nicaragua Connecticut tobacco, and second, to see what Indiana Ortez blended as she continues to become a more prominent player in premium cigars. After three samples, I have a bit more of an answer for the second question than the first. The blend has some really solid components, particularly the foundation of sweet creaminess with brighter notes of wood, pepper and earth, though there are a few points where they fall out of harmony and cost the cigar a few points. As for that wrapper, it definitely adds some delicateness to the profile, though I fear its best attributes get overshadowed too often, which leave me wondering just what all makes this particular varietal unique and desirable in a blend. The construction is quite good, leaving little to desire in that category, which leaves me with a cigar I enjoyed and was impressed by, and one that could be a good stepping stone for its blender to continue to grow her profile.