Before the ratings that came in early 2012, Alec Bradley made quite a bit of noise for itself in 2011, just not for Presnado. At IPCPR 2011, one of the most talked about cigars was the Fine & Rare, a limited edition cigar that contained 10 different types of tobacco and was sold out rather quickly. In addition, Alan Rubin’s company showed off the Black Market, a regular production line that received quite a bit of attention.

Fine & Rare shipped on November 11, 2011 and was limited to 1,111 boxes, playing off the 11/11/11 theme. While the 6 x 52 Toro size was the main focus, there were two additional sizes that were released in smaller packaging options.

The Fine & Rare was released in three different manners:

In addition to the relatively large price tag ($14.00), mysterious filler and limited nature, Fine & Rare became known for the monstrous bands, which contained quite a bit of information, including: It’s a dark Honduran wrapper with an immense amount of reds, but the oils are noticeably absent. In terms of appearance, the veins are a bit rough, but you focus on the gigantic band. There’s not much aroma off the wrapper of the Fine & Rare, a bit of leather, peanut and some fruits. From the foot there’s a sharp contrast: a strong black pepper up front, lots of peanuts, leathers and a bit of orange. Cold draw produces an interesting mixture of earth, peanut, citrus, pepper and coffee. All in various capacities, all relatively present from start to finish. The Fine & Rare starts the first third impressive: a great sweet nut, cocoa and cedar. There’s a touch of sour lemon before the nutty finish takes over and carries out the aged medium beginning. For the first third of each one of the Fine & Rares I smoked, smoke production was on par with Liga Privada, absolutely unreal. Eventually, the Alec Bradley settles with cedar up front, a bit of a harsh sweet note, some fruits, leather and earth; full, but muddled. 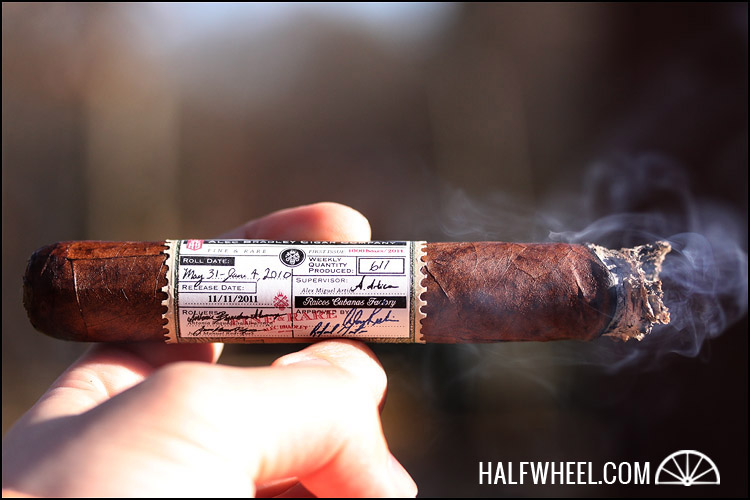 Into the second third and the absolutely wide open draw is becoming a problem. In the first third it was crazy open, but now it’s uncontrollable. Unfortunately, it seems to have an effect on the smoke production, which begins to become inconsistent and settles down. Flavor-wise, the Fine & Rare continues much the same, which is unfortunate. It’s a pedestrian earth and cedar mixture, a decent black pepper and hints of cocoa and fruits. Perhaps more disappointing, the complexity and depth of those initial puffs are completely lost. By the final third, my major complaint is that the clock reads two hours and 20 minutes, and the Fine & Rare just isn’t changing. Smoke production has settled, flavor has settled and it’s now become a question of when the cigar ends. There seems to be some complexities underneath the earth, a bit of a candy note and some of that peanut that I so hoped would make its way into the flavor profile, but they really aren’t coming through. For those wondering, from start to finish: medium-full to full in flavor, full in body, medium plus in strength.