Ventura Cigar Co. has made it known that they will be releasing two new lines at the IPCPR Convention and Trade Show in July: the Project 805 and PSyKo Seven. Both cigars have been seen in cigar magazine advertisements and have been added to Ventura’s website in recent weeks.

Project 805 is being made at La Aurora’s E. León Jimenes Tabacalera factory in the Dominican Republic and is centered around a leaf called Andulo that Ventura Cigar Co. says is “a unique tobacco never before used in cigars…naturally flavored, aromatic, and so utterly different it is a disruption to the Industry.”

The wrapper for the Project 805 is a Corojo Shade leaf, though the country was not specified. The binder is a Dominican Olor leaf, with the filler comprised of Dominican tobaccos and Andulo. The cigar is described as being “mild with complex flavor,” and will debut in four sizes: a 5 x 50 Robusto called the 805R, a 6 x 50 Toro called the 805T, a 6 1/4 x 52 Figurado called the 805F, and a 7 x 50 Churchill called the 805C. 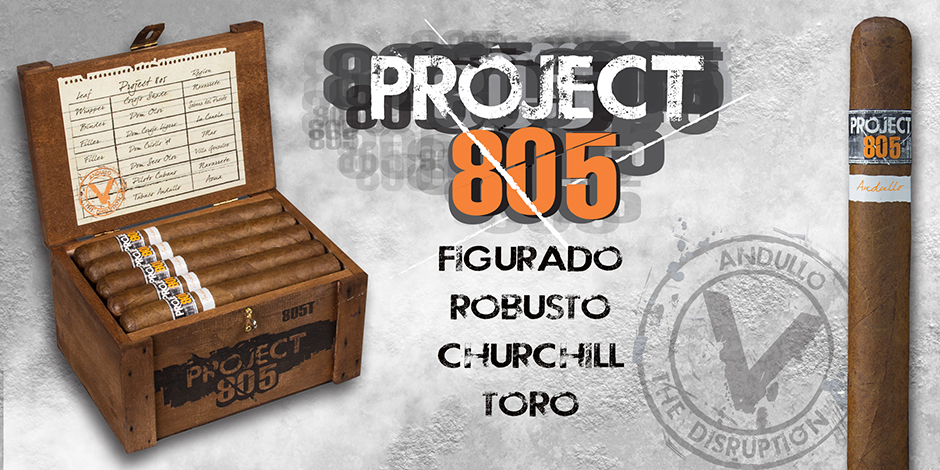 The name for Project 805 seems to come from the area code where Ventura Cigar Company is located, Moorpark, Calif.

PSyKo Seven is being marketed under the slogan “Medicate Your Mind,” and features seven tobaccos from six different countries, with production being handled by Tabadom in the Dominican Republic, the factory owned by Henke Kelner of Davidoff fame.

The PSyKo Seven uses a Dominican Hybrid wrapper, Mexican Sumatra binder and what is being called a “multiple country blend” for the filler. It will debut in three sizes: a 5 1/2 x 50 Robusto, 6 1/4 x 48 Gordito and 6 x 60 Gordo, and according to Ventura Cigar Co. has a mild-medium taste with “distinct transitions.” It is slated to be released in August. Requests made to Ventura Cigar Co. for further information about the cigars have gone unanswered.