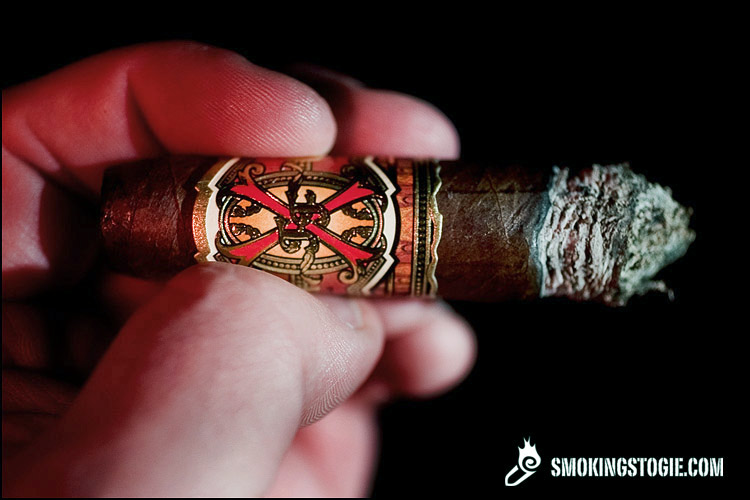 During every Christmas season for as long as I can remember, the Fuente family has released their Holiday Releases, which are mostly cigars that are only available, in quantities for a short time. Usually Hemingway Maduros, all sorts of sizes of Añejos, and various Fuente Fuente OpusX sizes.

Last year, the Fuentes surprised quite a few people, including me, by introducing three different vitolas and indicated that they would all be semi-regular releases. The Magnum O, the OpusX Shark, which previously was only available in the Opus 22 Boxes, and, the focus of this review, the OpusX Love Affair.

Now, if this size OpusX looks strangely familiar, you are not crazy. The Love Affair has a fairly long and storied (ahem) history, which I will try and detail here.

In 2008, there were 55 boxes of a new 4 1/2 x 55 vitola of OpusX Love Story given to various members of the Fuente website CigarFamily.com. There were five per box, with each box shaped like a heart, and the 55 boxes were commemorating Carlos and Anna Fuente’s 55th wedding anniversary.

Here is the post from Fuente explaining the background:

To commemorate this momentous occasion Carlito would like to share some of these FFOX Love Story cigars. Carlito has made 55 collectible boxes of the Love Story to share with his other family, the Cigar family. Each box contains 5 cigars, are numbered from 1 to 55 matching the number of years his parents have been married and signed by Carlos and Anna Fuente. Every cigar is banded with the FFOX primary band and the 2006 secondary band, the year the cigars were actually made. These collectible boxes are called “Love of Five” representing the 5 members of the immediate Fuente family, Carlos, Anna, Carlito, Cynthia and Ricky.

The shape was not entirely new however, as the OpusX Non Plus Ultra is the same size, just a different blend.

Facts are cloudy and hard to come by, but after that release of the Love Story, there was apparently some issues with the name, as the General Cigar Co.’s Romeo y Julieta Habana Reserve Love Story already used the name. Thus, Fuente changed the name of the vitola to Love Affair. 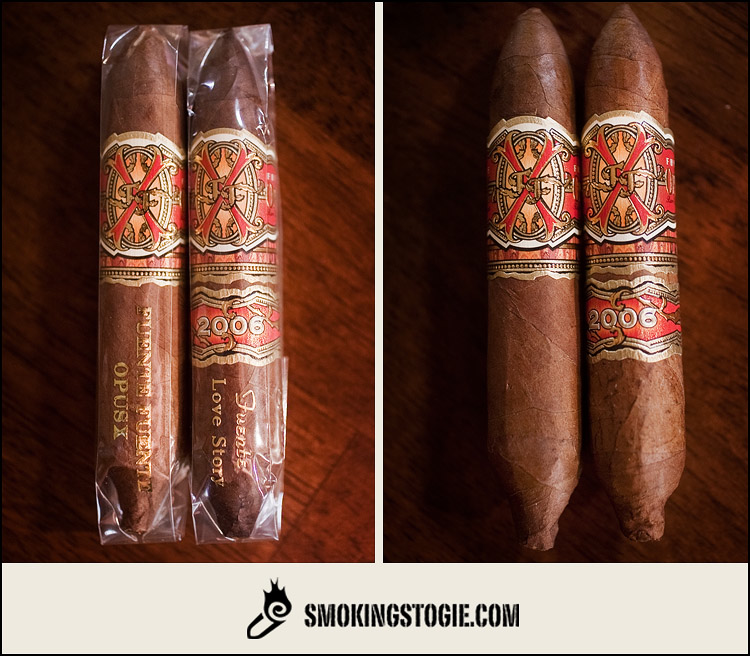 (Love Affair on the left; Love Story on the right.)

As I said, the size and look of the Love Affair and the Love Story are almost identical. I do love the size and shape, always have, and I think it is the perfect size for a one hour smoke. It also has a very slight box-press to it.

As with most OpusX, the wrapper is a medium red-brown and it is a superbly constructed cigar from the outside with very few veins showing. The wrapper itself smells a bit like chocolate and pepper.

As soon as I lit up the foot of the cigar, I was literally blasted with spice, an almost overwhelming amount, which surprised me quite a bit. This lasted for about the first eight puffs, then started to recede. As the spice died down, I noticed flavors of oak and a bit of chocolate.

As the second third started, the spice had calmed considerably, but was still a factor, and the flavors started turning sweeter, with a bit more of a creamy profile. I could not put a finger on any specific sweet flavor, but it was something I had not tasted in very many sticks, if any. The final third is where this cigar shined for me. The spice is still in the background, but not even close to as strong as in the first third; it is more of a compliment to the wonderful sweetness that was present. I was not able to put my finger on it in the second half, but the flavor got stronger at the end, and I realized I was tasting a wonderful sweetish cherry flavor that really ended the cigar on a high note. I was very surprised by the end of this cigar, as that is not a typical OpusX flavor. While the beginning of the Love Affair was almost overwhelmingly spicy, it calmed down into an excellent cigar that surprised me with its quality and finish. While it is a pretty good cigar right now, this is a prime candidate for aging and I will be buying a box of these to put to rest for a while. The flavors, while wonderful, were still a bit young, and I think they can get nothing but better by resting for a few years. Having said that, this was truly one of the best tasting young OpusXs I have smoked.