When Jorge Ahued of STOGIES World Class Cigars in Houston announced his plans to commission a 10-cigar series of lanceros, it became a waiting game to see just which manufacturers would be coming to the party with cigars in hand, and the latest one in the door is Fred Rewey of Nomad Cigar Co, and he’s brought a new blend with him.

For the eighth cigar in the STOGIES’ H-Town Lancero series, Rewey crafted a 7 x 38 vitola that uses a Mexican San Andrés wrapper—a first for Nomad—along with a Dominican habano binder and fillers from the Dominican Republic, with production handled by Tabacalera L&V in the Dominican Republic. It’s a blend that found favor with Ahued, who told halfwheel, “early in the year Fred brought me a few unreleased lancero samples knowing that I’m a big fan of the vitola; after enjoying each and every one of them I realized I just had to have this blend in my H-Town lineup.” 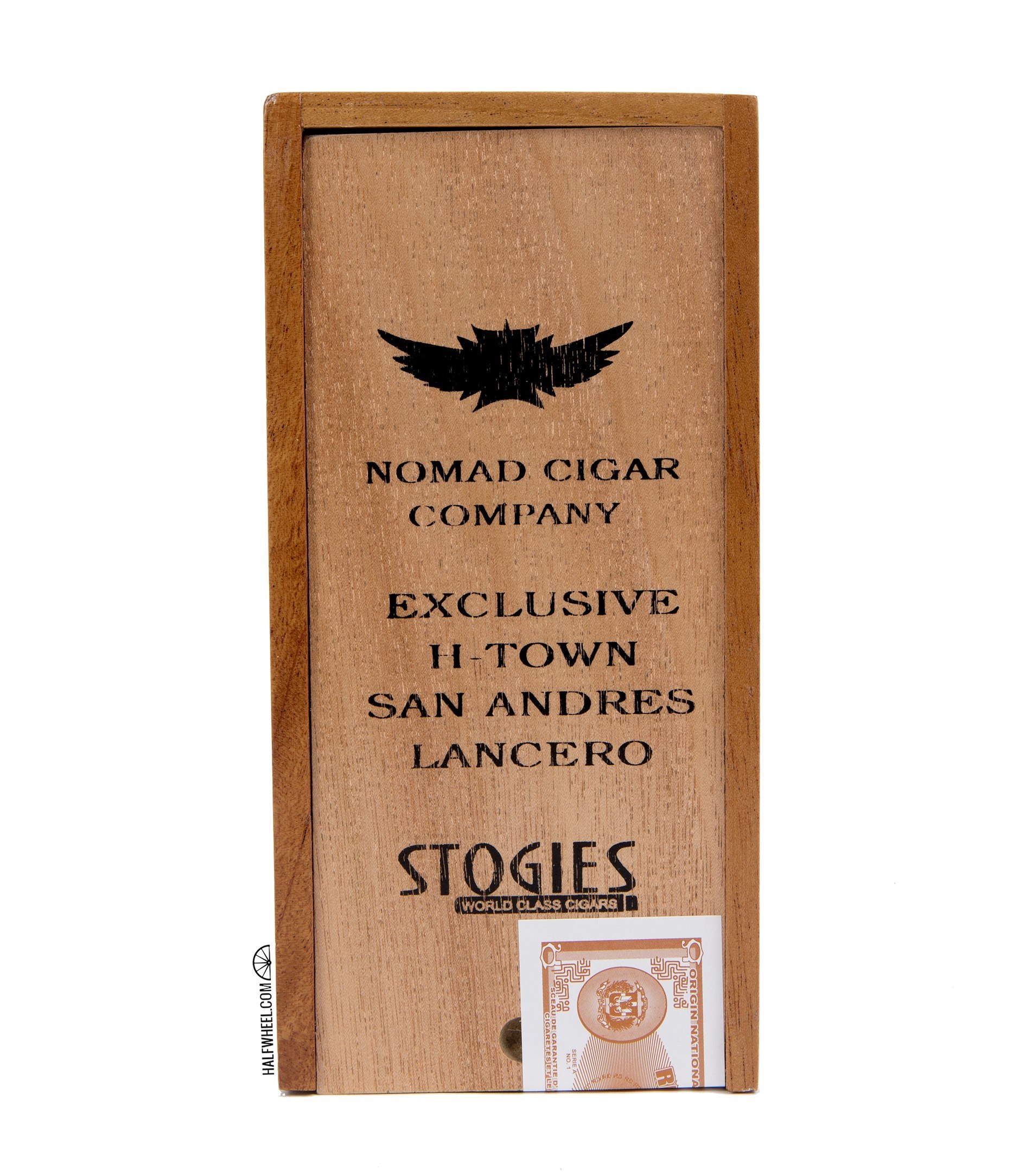 The Nomad H-Town Lancero arrived at the Houston store just about a month ago on Nov. 18, carrying a single stick price of $8.50, with 200 boxes of 10 cigars being produced. It joins a lineup that includes cigars from Alec Bradley, Crowned Heads, Fratello, La Palina, Quesada, , Room101, Tatuaje and next week, Illusione. “I am honored to be a part of a very exclusive group of blenders participating in this series,” Rewey said in a press release. “Lanceros offer a flavor experience that cannot be found in other sizes. Jorge has put together an amazing, and diverse, collection of Lanceros that are sure to please cigar aficionados everywhere. For Nomad, it is another milestone in what has certainly been an incredible journey since starting the company.”

In addition, the ninth and 10th cigars in the H-Town Lancero line have been announced, a 7 x 40 lancero from Illusione that is due on Jan. 1 and the Neanderthal OM from RoMa Craft Tobac that is due later in January. The wrapper on the Nomad H-Town Lancero could easily qualify as a spokesmodel for Mexican San Andrés leaf: earthy brown, fairly small veins, loaded with tooth and a bit of crystallization. The seam lines are nearly flat but are still visible, while the roll quality looks to be pretty even, a firm stick that shows little give when squeezed. It’s been a while since I’ve smoked a Nomad cigar—apologies, Fred—so the band feels a bit unfamiliar given the presentation that Nomad used when it was a brand new company, but a quick jogging of my memory reminds me that it is the same band as what’s used on the Nomad Therapy, but in a gold font on a white background. I’m getting just a bit of sweetness and earth off the foot of the H-Town Lancero, but it’s barn wood and dry earth that dominates the majority of the pre-light aroma. The cold draw is just a bit firm but not obstructed, offering a bit of dry soil, wheat and a faint touch of raspberry, with no appreciable pepper or spice.

I’m surprised by the smooth mellowness of the first puffs of the Nomad H-Town Lancero, as there’s just a bit of creaminess that suggests a Connecticut wrapper, though I know it isn’t. One sample shows just a touch of berry sweetness, sort of like what you get when you microwave frozen berry mix, but it seems to be the anomaly of the first puffs. White pepper comes along when the burn line hits about a third of an inch, offering a subtle shift to the flavor and strength of the cigar but still keeping it on the mild side of medium. The ash makes it immediately clear that is has no desire to hang on in the first third, dropping off in small clumps about a third of an inch or so in length. The cigar stays very comfortably on the mild side, making the case to call it a morning stick, though there is a certain firmness to the draw that seems to conflict with the easy-going nature of a morning stick, which other than the ash’s weak grip is about the only drawback I can find to this point. The burn has been good if not completely even, not off enough to warrant a touch-up or any level of concern. Despite the slightly tight draw it only takes about 25 minutes to make it to the transition to the second third, with pepper on the retrohale helping to give the cigar just a touch more power to tap into if wanted. Given that the pepper in the nose from the Nomad H-Town Lancero is pretty enjoyable due to its restraint, I find myself retrohaling a good bit more than I would do with most cigars, and just as I get fairly comfortable with its strength, it steps up and gets punchier a few puffs into the second third. With that added strength, the cigar begins to separate just a touch in terms of its union of flavor and strength; the palate is still getting a much milder profile but the nose is getting a hearty note of table pepper, and while the two play well with each other, they aren’t in perfect union as my nose is left tingling long after my tongue is. On the palate this comes across as medium-minus, a bit fuller than where it started but far from overpowering. Through the halfway point I start to get more of the pepper that San Andrés tobacco is known for, and the Dominican habano binder seems to be contributing a bit as well, while there’s a base note of dry lumberyard wood and mineral that I tend to associate with Dominican tobacco. My expectations of San Andrés tend to involve the word earth, but I can’t say that I’m too disappointed that the telluric flavor I’m craving hasn’t been offered yet, as the Nomad H-Town is keeping the senses plenty entertained. The burn remains near perfect with no touch-ups and decent smoke production. At the start of the final third, pepper moves into near sole possession of the flavor, particularly in the retrohales, which gives you the option to control just how peppery the Nomad H-Town Lancero becomes; if a milder cigar is in order, simply don’t retrohale, or if you’re in the mood for something with a bit more punch, pass the smoke through your nostrils and you’ll be good to go. The cigar continues to build up in strength ever so slightly, nudging squarely into a medium-bodied flavor profile without much in the way of nicotine kick. I’m still not getting much if any big earth flavors from the cigar and certainly no sweetness in two samples, though one sample does offer just a bit of thick brownie and melted chocolate, while the others stick with clean flavors that have a lighter dry earth profile with a backing profile that is harder to dissect but seems rooted in wood. There is still plenty of pepper in the nose to add in strength when desired and a touch is beginning to hit the palate. The burn line stays sharp and even all the way down to the fingertips, while the cigar never offers up much in terms of nicotine strength. This is certainly a different expression of Mexican San Andrés tobacco than what I have experienced, and I’m certainly impressed by what Fred Rewey has crafted. Yes, it does feel a bit disjointed at times between nose and palate, but neither is an inherently bad component of the overall experience. In the end, the Nomad H-Town Lancero is a cigar I really like, falling just short of the “cigar I love” endorsement, but certainly a worthy entry into the H-Town Lancero series.