The cries for a lancero strike again.

Having been smoking cigars for some time now, I have become acutely aware of the seemingly non-stop request for cigar makers to produce their latest blend in that slender vitola that some love and of which seemingly most aren’t that fond. I’ve certainly been guilty of making the request myself, and if nothing less asking the question almost as an automatic reaction to the announcement of a new line.

For Steve Saka, he has been very forthcoming about his position about liners. Going back to his days at Drew Estate, he acknowledged both the challenge of making the vitola from a blending and construction standpoint, as well as his own lack of preference for the size. Now as the head of his own company, Dunbarton Tobacco & Trust, his opinion doesn’t seem to have changed much.

“Like all the others, this vitola is yet another personal blending challenge given that I am vocal in my lack of appreciation for this lancero format,” wrote Saka on the cigar’s sales sheet. “As a ligador, I have never had a lancero that I didn’t feel I could make better if I were to blend the same in a slightly wider format.”

But that doesn’t mean he wouldn’t make one, while giving the cigar a name reflective of his always opinionated, occasionally grumpy or snicker-filled personality.

For the fourth vitola in his Muestra de Saka line, Saka, created a 7 x 38 lancero, calling it #NLMTHA, a hashtag approach with an acronym for now leave me the hell alone. Fitting, timely and almost unmistakably Saka. 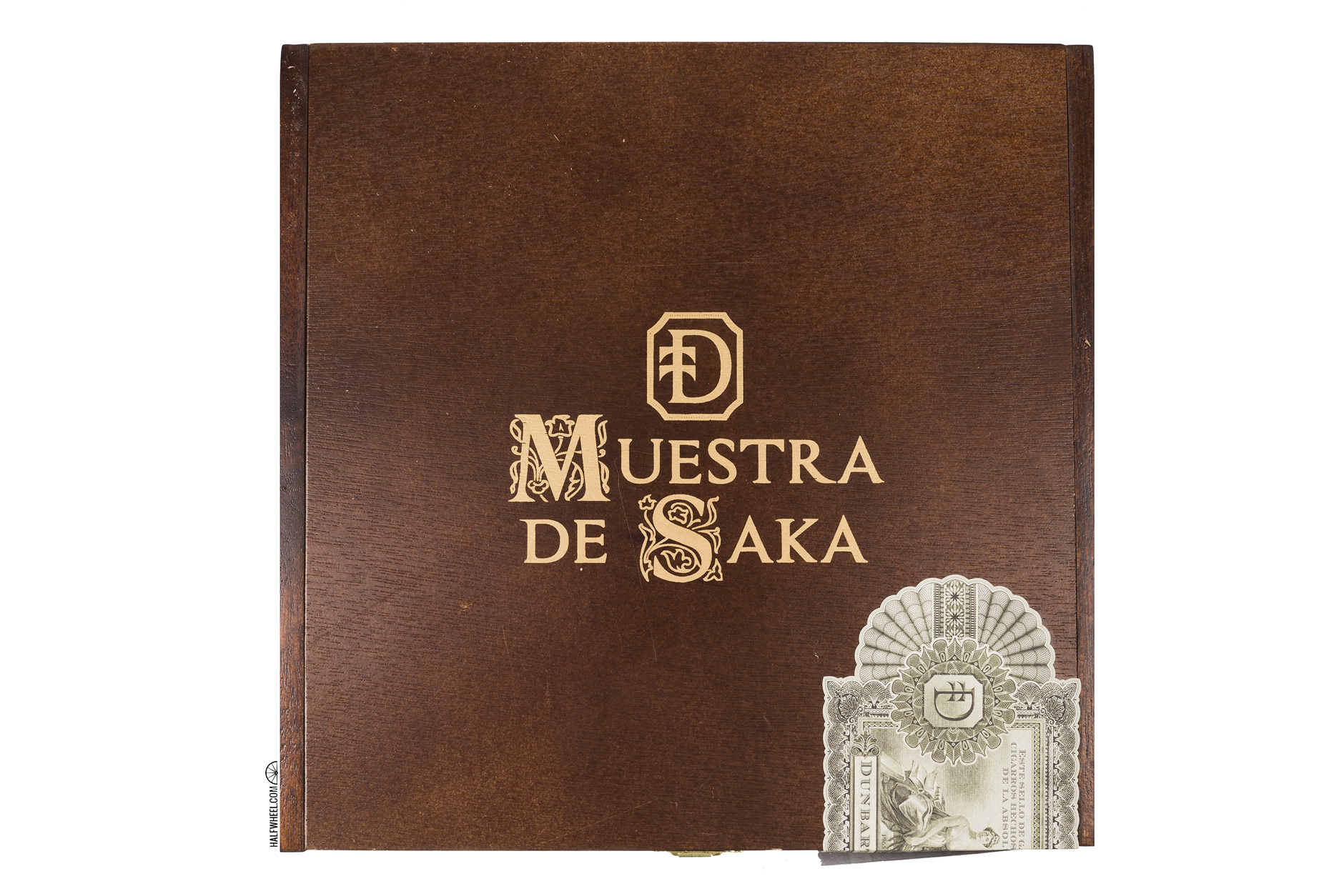 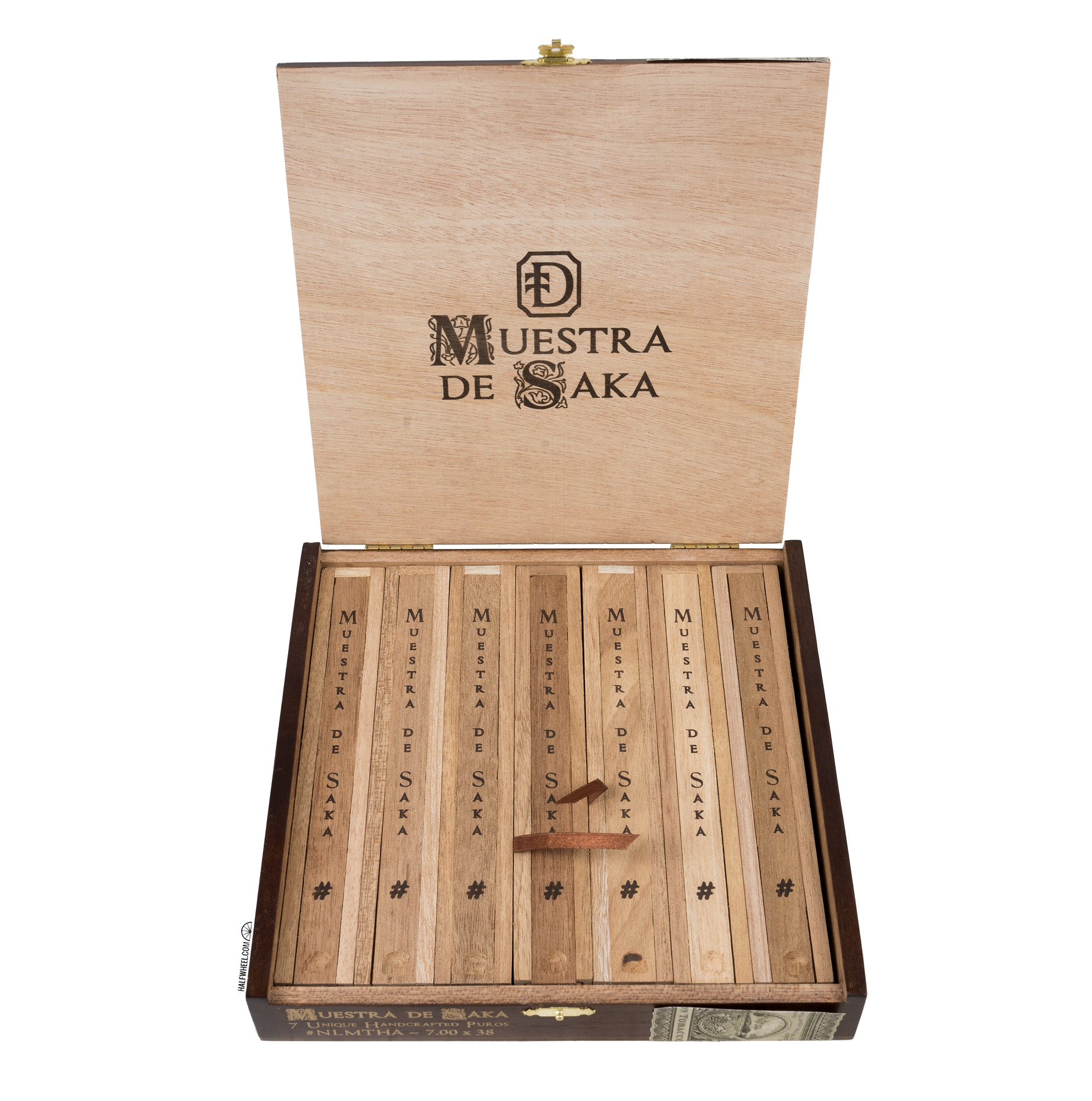 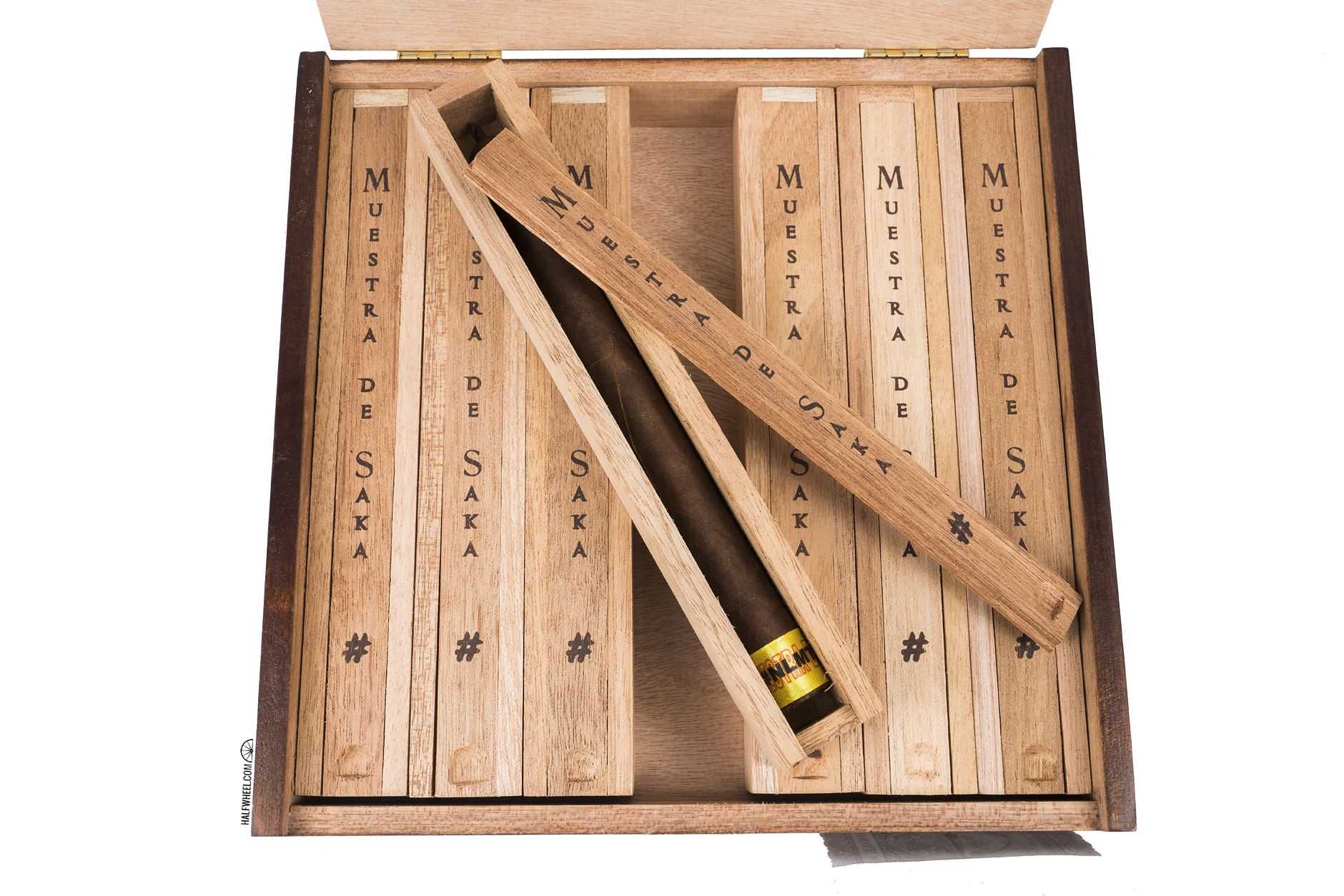 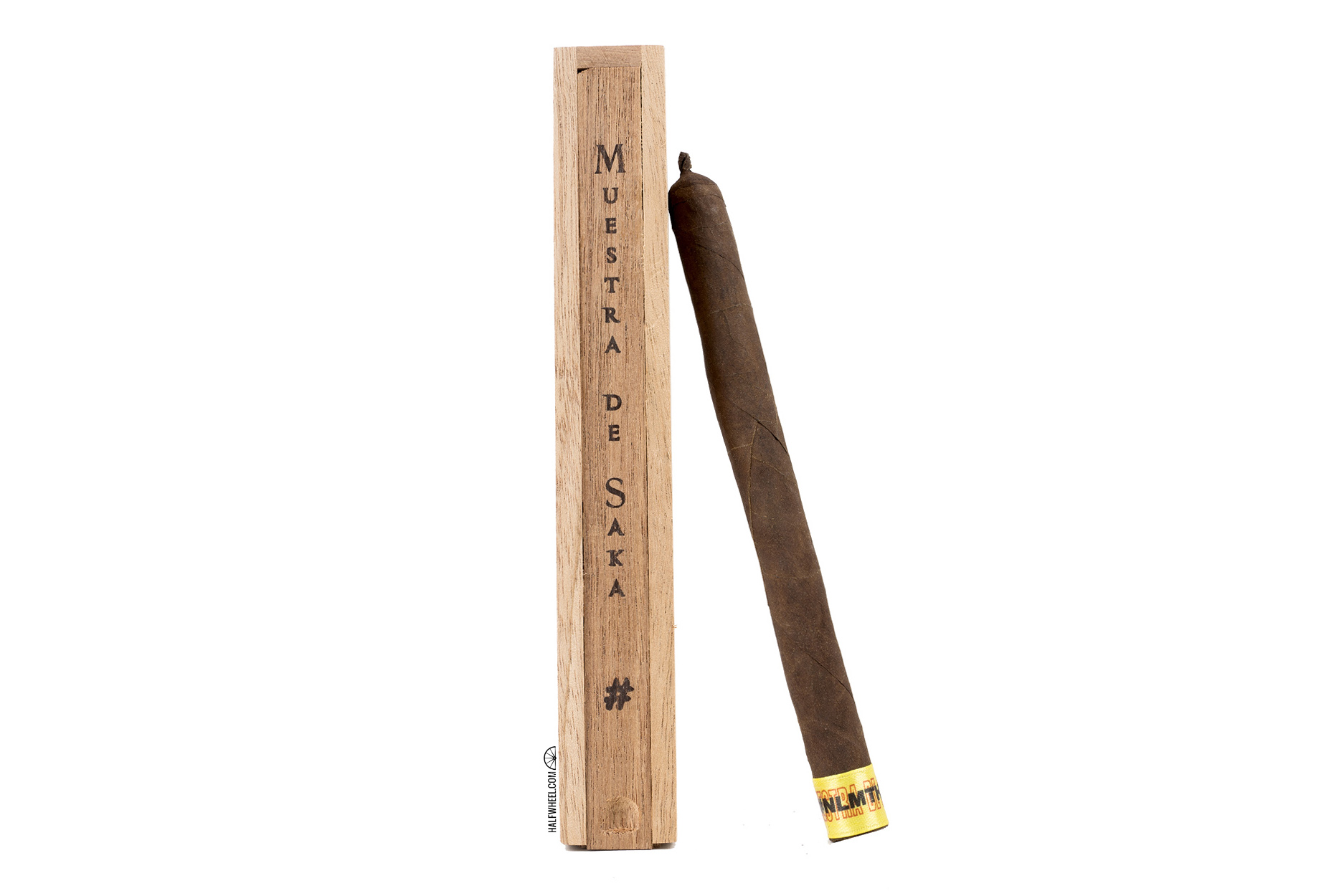 The blend for this size has not been disclosed, but Saka says the line as a whole “reflect(s) the blending machinations of myself,” as the name means Sample of Saka or Saka’s Sample. Pricing is set at $17.95 before taxes, with the #NLMTHA coming in seven-count boxes and each cigar in its own coffin.  It is a regular production size for the line, though it will be limited in just how many will be produced at any one time. 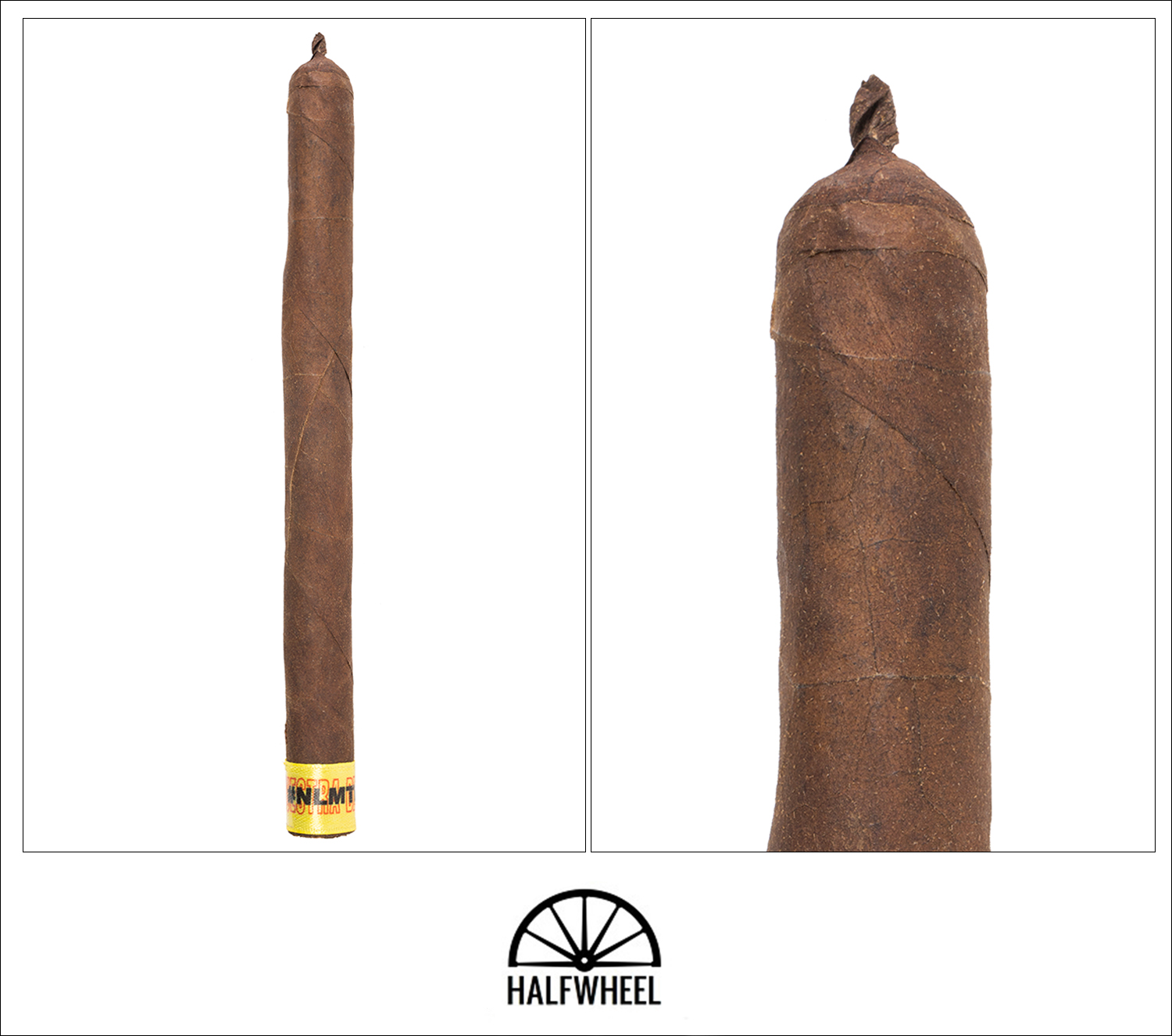 The cigar is fairly tame in appearance, wearing just a simple yellow ribbon foot band with Muestra De Saka in red and #NLMTHA printed on top in thick, black block letters. There is a bit of flare with a short twist of tobacco on the head the resembles a small chisel or fan, but this cigar is far from craving attention. The wrapper varies from sample to sample; the first and third are quite dry with a fine grit to them, while the second is oilier and much smoother on the fingers. There are a few small veins, but other than that the only thing that stands out is some color variance where the wrapper lightens up a shade or two, noticeable along the seam lines. It’s a firm roll without being hard and the roll is clean, showing no issues of concern. The foot has a profile that smells of dry wood at first sniff, though unfolds to reveal a bit of molasses or pancake syrup sweetness, with only the faintest amounts of pepper present. The cold draw is surprisingly but not overly sweet, either a chocolate malt or graham cracker at first taste depending on the sample, before woods and pepper come into to redirect that sensation. I can’t quite place the flavor once it’s become familiar to my palate, other than a dry and somewhat sour wood, though it doesn’t show up consistently.

The Muestra de Saka #NLMTHA starts off a bit funky, slightly dry and sour with the wood note serving as the base, though it doesn’t waste much time righting the ship. The retrohales are where the cigar shines in the first inch with bright white pepper that lingers on the senses for a couple of seconds after each exhale. It’s so good, I find myself spending most of the first inch or so retrohaling, which may not be for everyone, but I find it helps me get the most out of the cigar. After the first clump of ash falls, the palate gets some of that same white pepper, though mingled with mellow tones of dry earth and the dry wood from earlier, yet I don’t find my palate to be drying out at all. Black pepper comes into the fold just ahead of the second third to shift the source of most of the physical sensation. The cigar performs quite well in the early going, with my only quip that the draw could be a touch loose for some. The cigar seems to find its groove not too long into the second third, though when I take more than one puff in succession I seem to evoke the funkiness that the cigar contains, which is a reminder not to push this slender vitola. My retrohale-first approach to the cigar still seems to be the more rewarding approach, and white pepper is still bright, even brighter than it had been in the first third. Focusing more on the palate, the profile strips whatever sweetness had been present in the first third, which wasn’t much but there’s even less now, and shifts to a more robust, pepper and earth combination that is familiar but still well-executed. The rocky earth is very familiar on the palate and enjoyable if your preferences skew that direction as mine tends to, and across the midpoint, the combination of retrohale and palate bring the cigar to its brightest point yet. A very appealing smokiness begins to emerge shortly thereafter, reminiscent of walking by the smoker at a barbecue restaurant. 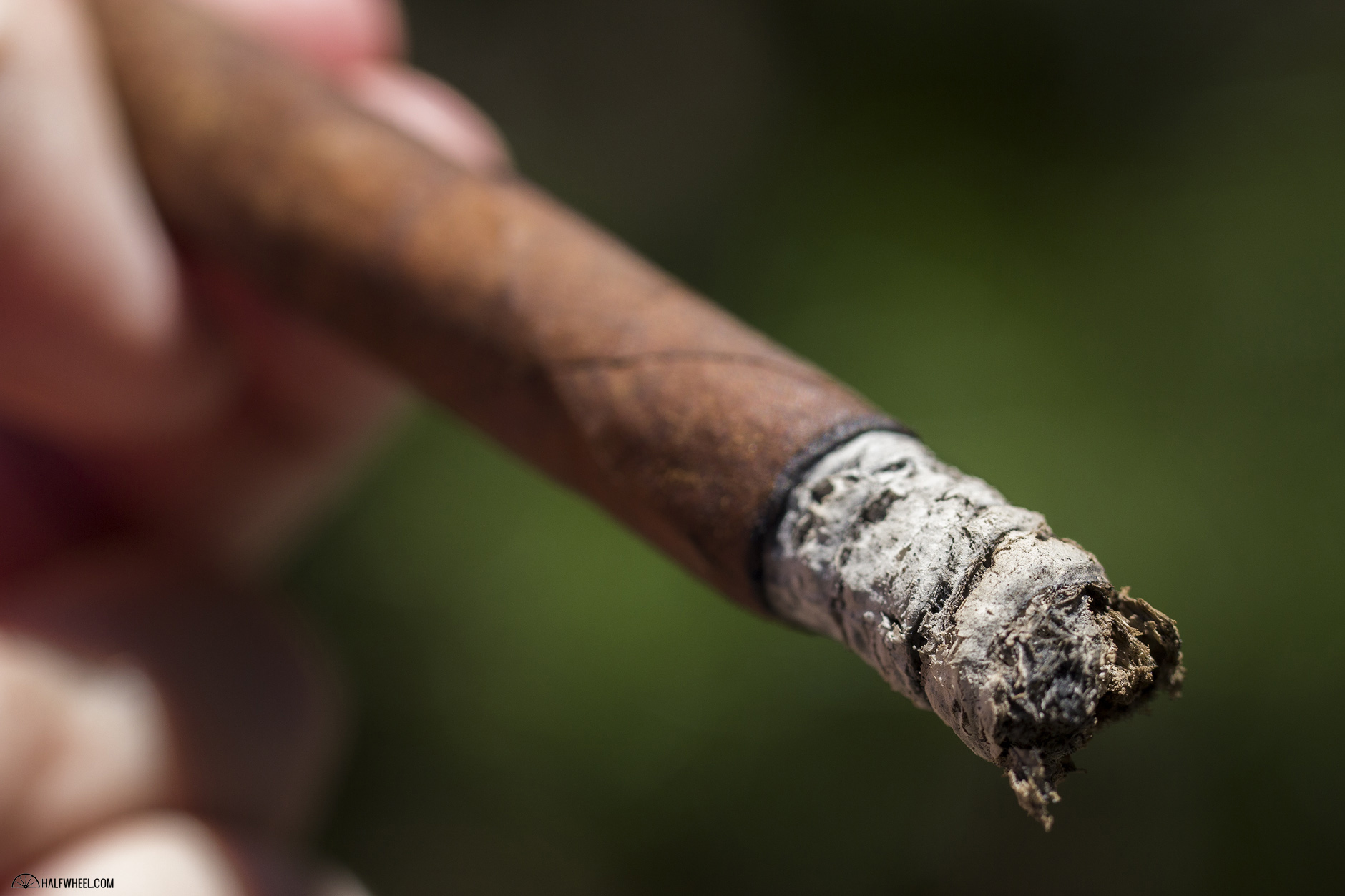 The start of the final third sees the black pepper fade away a bit but leave the white pepper in place, while the earth notes take on a slightly sour and ever so slightly chalky component. While the profile has a bit more character and edge than in the second third, I can’t say it’s an inherent improvement, save for the third cigar I smoked that didn’t pick up those notes in the quantity of the other two. That third sample sees the biggest mellowing, stopping short of getting mild and creamy, but the profile does start dabbling in nuttiness, which is quite enjoyable as well. I’m quite impressed that heat doesn’t become a factor in the final inch of the cigar, as between the slender vitola and the burn line getting close to my fingers, the flavor stays right in line with where it has been throughout the majority of the cigar. Construction is fantastic, smoke production is impressive for such a slender cigar, and the draw remains nearly ideal. Not that long ago, I wrote that I have changed my tune about lanceros making every blend better. Yes, it is a somewhat rare and novel vitola, it changes the proportions and ratios of the tobaccos and thus affects the flavor, but it is not a miracle worker or magic size. First things first, the technical part of the Muestra de Saka #NLMTHA lancero is fantastic, nearly flawless in all honesty. Flavor-wise, there is more variance from sample to sample than I would prefer; at its high point it's a cigar of the year candidate, at its lowest it is funky and a bit rough on the palate, though retrohales never suffer the same fate. This line has never been proclaimed to be a value buy and the lancero is no exception, though I wouldn't feel terrible about picking up a few if you like the blend and want to smoke it in a different size. I can't say it's inherently better than the other vitolas, but it can still be a very enjoyable smoke on its own.