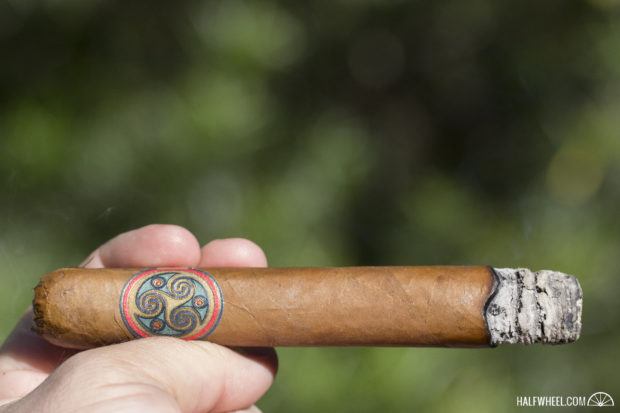 In the summer of 2016, Mel Shah not only decided that the time was right to release a new cigar line, but he decided that it was time to bring to market a particular cigar that he had been working on for four years in hopes of creating a blend that offered plenty of flavor but not overpowering strength.

That cigar is Gaaja, which launched last July and gets is name from Gaja, a word that stems from Hindu mythology and refers to the often-seen elephant in that tradition. Pronounced GUY-yuh, Shah thought it was a fitting name given its representation of patience, something he had to practice in getting the blend to a point where he was satisfied with it and ready to share it with consumers.

To achieve that goal, Shah tapped into tobaccos from four countries: Ecuador for the wrapper, binder and part of the filler, which also uses tobaccos from the Dominican Republic, Peru, and Paraguay.

Shah expanded the line earlier this year, adding a maduro version in both a Torpedo and Toro vitola, while the original blend got a Torpedo vitola as well.

Here’s what I said about the MBombay Gaaja when I reviewed it in July 2016:

Cigars with subtleties have always been a favorite of mine, but I feel like they come with a fairly high cost of admission: your undivided attention in order to get the most out of them. For the first half of the cigar, the Gaaja asks for and rewards your attention with a very intricate dance of sweetness and white pepper. While it seems evenly matched early on, the pepper begins to take the lead and ends up driving the second half of the cigar, which while not inherently bad, takes the cigar in a direction it didn’t necessarily need to be taken. While this is a fantastic cigar now, I have a feeling that time will only enhance it and allow the intricate layers of flavor and subtlety it contains to be even more accessible and enjoyable. The Gaaja is a lovely shade of butterscotch with a box press that gives the vitola a good bit of definition and form. This particular sample seems to have received some damage near the head as there is a small crack in the wrapper and the cap almost disintegrates when clipped. Below the band though, the veins are minuscule and flat, with nothing distracting from the presentation of the cigar whatsoever. The foot offers an aroma that is bright and rich with breads, leading me to think of Champagne but there’s no fruit or floral notes to round it out, yet there is just a bit of honey sweetness and a touch of alcohol. The cold draw  is smooth and easy, lighter in intensity than the aroma but showing many of the same characteristics as the aroma.

For the descriptors used to describe the prelight experience of the Gaaja, few are applicable when it comes to the first puffs, as pepper is quite present and gets rounded out by a bit of hearty toast and vibrant woods that get right after the senses. A bit of sweetness begins to emerge just before the first clump of ash breaks off around the one inch mark and has hints or orange syrup, a very enjoyable addition to the mix and a note that stands out particularly well through the nose. The thickness of that sweetness doesn’t last long, but the core component sticks around through the first half and takes on a bit of sweet graham cracker when combined with the there notes of the cigar. Pepper is still a decent player as well though it has backed off just a bit. The second half continues where the first left off, and much like I experienced when I originally smoked the cigar, retrohales are a key part of the experience, particularly if you are looking for a bit more pepper or strength from the cigar. The sweetness has almost left the cigar entirely except for a very subtle hint of banana, and while I wouldn’t mind having that thick orange note back both for its own flavor and for what it does to the complexity of the cigar, I can’t say that the Gaaja is suffering because of its absence. There’s a touch of harshness as the Gaaja needs to shed its band, as the pepper settles into the roof of the mouth and back of the throat, the only significant detriment the cigar has shown to this point. The burn, smoke production and other technical aspects have all been great and problem-free. The finish continues to show more pepper and its harshness is hard to ignore, making this an exceptional cigar for five of its six inches.

Just over a week ago, I was sitting in a cigar lounge when a reader of the site asked me about MBombay's cigars and the first one that jumped to mind was the Gaaja. After smoking the cigar again, this time with nine months of rest in the humidor on it, I'm pleased to say that my recollections of that cigar were on point. Mel Shah certainly achieved his goal of offering plenty of flavor without overpowering strength, at least for the first five inches of the cigar. The rich notes of breads, wood, orange and banana sweetness, combined with accents of pepper is simply fantastic, and the technical performance is the proverbial icing on the cake. If you are fortunate to be near a retailer that carries this cigar, I know you'd be well served giving it a try. If you're not in proximity to such a store and you want to try a complex, well-balanced cigar that doesn't taste like the majority of what else is on the market, this is one worth tracking down.