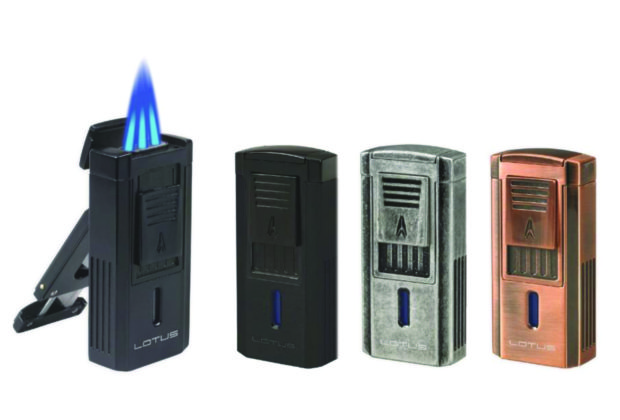 The Lotus Group has begun announcing its new products that will be shown off at the upcoming IPCPR Convention & Trade Show, and among its newer offerings is a triple flame torch lighter with a built in serrated blade v-cut cutter. The Duke V Serrated Cigar Cutter Lighter is an updated version of the company’s existing Duke model, and like its predecessor features three jets that are angled together to create a pinpoint, wind resistant torch flame that is triggered by a single action ignition and which the company says is guaranteed to work at up to 8,000 feet of elevation. What’s new can be found on the back of the lighter: an integrated v-cutter that can handle cigars up to 60 ring gauge with its stainless steel, serrated blades. On the front of the lighter is a tinted fuel window that provides easy visibility into how much butane remains in the tank. It is offered in black matte, antique pewter and antique copper, each priced at an MSRP of $69.95. Rosemary Sharp, president of The Lotus Group, said that the new lighter is in stock and available to ship immediately following the trade show, which runs from July 13 – 17 in Las Vegas, Nev.