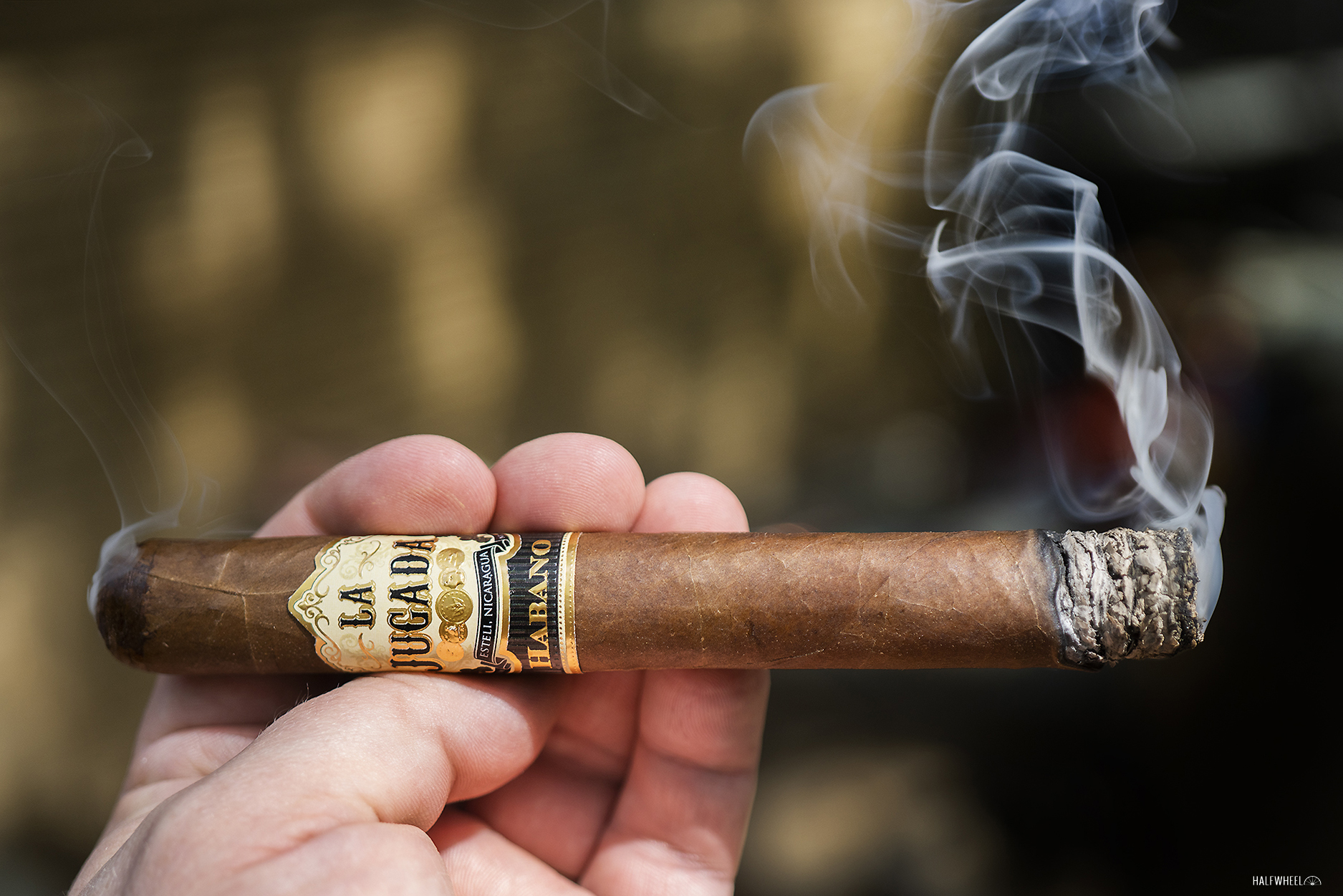 MoyaRuiz Cigars, which was founded by Danny Moya and Nelson Ruiz in 2013, is one of those cigar companies that is best known for its more unique-looking creations, such as the Hand Gripper, The Chinese Finger Trap and La Jugada Nunchuck.

However, the company also produces a number of more traditional creations, such as the brand’s inaugural release, the La Jugada, a blend that debuted with four vitolas in early 2013 which were wrapped in a Mexican San Andrés wrapper, while the binder and filler were undisclosed, called a “top secret” double binder and a filler made up of Nicaraguan leaves.

During the 2013 IPCPR Convention & Trade Show, MoyaRuiz Cigars showed off a different version of the La Jugada that replaced the original line’s San Andrés wrapper with an Ecuadorian habano leaf, In August 2020, MoyaRuiz Cigars announced an addition to the La Jugada Habano line, the 6 x 52 La Jugada Habano Semi-Pressed Toro. While the blend is identical to the other vitolas in the line—and is the same size and ring gauge as the Toro that had already been released in 2013—there are two distinct differences. First, the new toro featured a soft box-press; and second, unlike most La Jugadas that are aged for six months after rolling, the toros are aged for a full year before being shipped to retailers.

The regular production release is rolled at the La Zona Cigar Factory in Estelí, Nicaragua and is packaged in boxes of 20. There are currently six different vitolas in the La Jugada Habano line:

Here is what I wrote in my original review of the La Jugada Habano Semi-Pressed Toro almost exactly 18 months ago:

I knew the La Jugada Habano Semi-Pressed Toro blend was going to be a powerhouse after the first third and it did not disappoint in that regard. What I did not know was how much I would enjoy the combination of creamy profile, complex profile and distinct caramel sweetness, all of which were consistent on each of the three samples I smoked. Having said that, the combination of close to full strength and ever-present spice on the palate did give the overall balance issues at certain points, and the slightly loose draw was mildly annoying. In the end, I enjoyed the La Jugada Habano Semi-Pressed Toro quite a bit, but I am really looking forward to trying it again after it has some more age on it. As was the case the first time around, this La Jugada Habano is covered in a milk chocolate brown wrapper that is smooth as silk to the touch, although the amount of oil seems to have diminished somewhat from what I remember. The box-pressing is not exactly obvious—in fact, it is only noticeable when the cigar is held at certain angles—and the cigar is pleasantly firm when squeezed. Aromas from the wrapper are quite strong and include distinct dark chocolate, earth, hay, barnyard and a slight vegetal note. The foot includes an extremely strong cedar note, along with less aggressive scents of nutmeg, vanilla beans, black pepper, cinnamon and leather tack. After a straight cut, the cold draw shares a couple of notes with aromas from the foot—including a massive cedar flavor, vanilla bean sweetness and cinnamon—while adding flavors of baker’s spices, toast, espresso beans and light charred meat.

While I am ready for the same aggressive spice and pepper I remember from the first time I smoked this cigar, I am pleasantly surprised when the first few puffs are full of a combination of creamy cedar and dark chocolate, which continue to top the profile as the first third burns down. That is not to say there is no spice at all—there is—just that it is much more balanced with not only the main flavors, but also with the secondary notes that include leather tack, sourdough bread, nutmeg and sweet hay. There is also some noticeable black pepper on the retrohale—albeit quite a bit less than what I remember from the first samples—that combines well with a strong caramel sweetness that reminds me of the inside of a Twix candy bar. Flavor ends the first half at medium plus, while both the body and strength max out at a solid medium. Construction-wise, the draw is excellent and there is no lack of smoke off of the foot, while the burn only needs a minor correction just as the first half comes to a close.

For the most part, consistency is the name of the game for the La Jugada Habano in the second half, including the enjoyable combination of creamy cedar and dark chocolate that top the profile. Secondary flavors include significantly more charred meat as well as sourdough bread, nutmeg, peanuts, earth and a slight vegetal note, while the retroahale has noticeably increased levels of the same black pepper and strong caramel sweetness that was present in the first half. In addition, although the spice on my tongue has become more aggressive, it never comes close to being problematic for the overall balance. Flavor ends the cigar at full and the body barely budges from a solid medium while the strength reaches medium plus before stalling out. Finally, the overall construction gives me no issues whatsoever, with the excellent draw, copious smoke production and near perfect burn all working in perfect harmony until I put the nub down after one hour and 39 minutes of smoking time.

Aging cigars—either intentionally or not—can be a odd thing: sometimes the down time leads to negative results or almost no change at all, and sometimes there are significant positive changes. Thankfully, after 18 months of age, the La Jugada Habano Semi-Pressed Toro falls firmly in the latter category. While the strength I noted in the first review was still present, it never became overwhelming, and the aggressive spice that gave the overall balance issues has been toned down to a point where it is attribute instead of a detriment. In addition, the profile retained its creamy and complex profile that was highlighted by main flavors of creamy cedar and dark chocolate on the palate as well as a distinct caramel sweetness on the retrohale. In the end, the La Jugada Habano Semi-Pressed Toro is a cigar that is not only much more enjoyable than when it was first released, but also seems to have much more under its hood for further changes down the road.