One of more recent companies to show a willingness to think outside of the box—no pun intended—when it comes to unique names or elaborate packaging is MoyaRuiz Cigars, which was founded by Danny Moya and Nelson Ruiz in 2013. With releases like Hand Gripper, The Chinese Finger Trap, and La Jugada Nunchuck, the company has shown it will try just about anything to not only capture the attention of people buying cigars, but to also show off its creations in a unique light.

However, MoyaRuiz still concentrates some of its time on more traditional releases, like the subject of today’s review, the La Jugada Habano Box-Press.

The original La Jugada line was originally set to be named Flor de Estelí, but company co-owners Danny Moya and Nelson Ruiz decided to change it to La Jugada after a trademark issue arose with another company. Released in 2013, the first La Jugada blend was wrapped in a Mexican San Andrés wrapper and debuted with four vitolas.

Later that year, MoyaRuiz Cigars showed off a brand new version of the La Jugada named La Jugada Habano. As the name indicates, the variant blend replaces the original line’s San Andrés wrapper with an Ecuadorian habano cover leaf, while the internal mix of tobaccos remains the same: a “top secret” double binder and a filler made up of Nicaraguan leaves. Although the habano version of the cigar was originally planned to launch at the same time as the San Andrés release, the company decided to ship the habano version later because they felt the cigars were not ready. Fast forward to earlier this year, when MoyaRuiz Cigars announced an addition to the La Jugada Habano line, the 6 x 52 La Jugada Habano Semi-Pressed Toro. Although the blend is identical to the other vitolas in the line, there are two main differences: the new toro features a soft box-press and unlike most La Jugadas that are aged for six months after rolling, the toros have been aged for a full year.

The regular production release is being rolled at the La Zona Cigar Factory in Estelí, Nicaragua, features an MSRP of $9.50 and is packaged in boxes of 20. Boxes began shipping to retailers in late August.

There are now six different vitolas in the La Jugada Habano line: Covered in a milk chocolate brown wrapper that is smooth as silk to the touch, the La Jugada Habano Semi-Pressed Toro also features some noticeable oil as well as numerous overt veins. While the cigar definitely has a soft box-press, it is hardly noticeable unless you are actively looking for it. One sample has a massive soft spot just under the main band on the back. The aroma from the wrapper and foot is a combination of strong sweet cedar, barnyard, cocoa nibs, leather tree bark and raisins, while the cold draw brings flavors of the same creamy cedar, hay, earth, leather, baker’s spices and generic sweetness.

The first third of the Habano Semi-Pressed Toro starts off with some significant spice and black pepper in the profile, along with dominant flavors of both graham crackers and creamy cedar. Secondary flavors of bitter dark chocolate, gritty earth, coffee grounds, hay, cashews and toast flit in and out, along with just a bit of generic sweetness on the retrohale that does seem to be getting a bit stronger. In addition, there is a nice floral note on the finish, although it is just not that strong at this point. Construction-wise, the draw is a bit loose for my tastes—albeit still very smokable—on each of the samples after a straight cut, while the burn is excellent so far. The smoke production is well above average while the overall strength shows its hand early, ending the first third just under the medium mark and still increasing.

Coming into the second third of the La Jugada and the profile has changed a bit: while the dominant flavors continue to be a combination of graham crackers and cedar, the profile is also noticeably more creamy overall. Other notes of cashews, coffee grounds, earth, leather tack, and slight toast are present in various amounts. While the black pepper note on the retrohale fades, the spice on my tongue remains a dominant force in the profile. Another change is the sweetness on the retrohale, which is now distinct enough to remind me of caramel sauce, while the floral note on the finish seems to be sticking around as well. The draw continues to be just a little loose and the burn continues along its excellent path. While the strength does increase as expected, it only manages to reach a point just north of medium by the time the second third comes to an end. Both of the flavors that have dominated the profile of the La Jugada Habano so far recede into the background during the final third, replaced by a strong lemon peel citrus note. In addition, there are flavors of dark chocolate, cedar, bitter espresso beans, hay, cinnamon and graham crackers, while the caramel sauce sweetness is still obvious on the retrohale. Plenty of spice is still present on my tongue—and remains that way until the end of the cigar–while the finish is still full of floral notes along with a touch of added bitterness. In terms of construction, the draw has not changed, but the burn has issues early on in the final third, leading to a couple of quick corrections. Finally, the overall strength level easily hits a point just under the full mark by the time I put the nub down with a little less than an inch remaining. 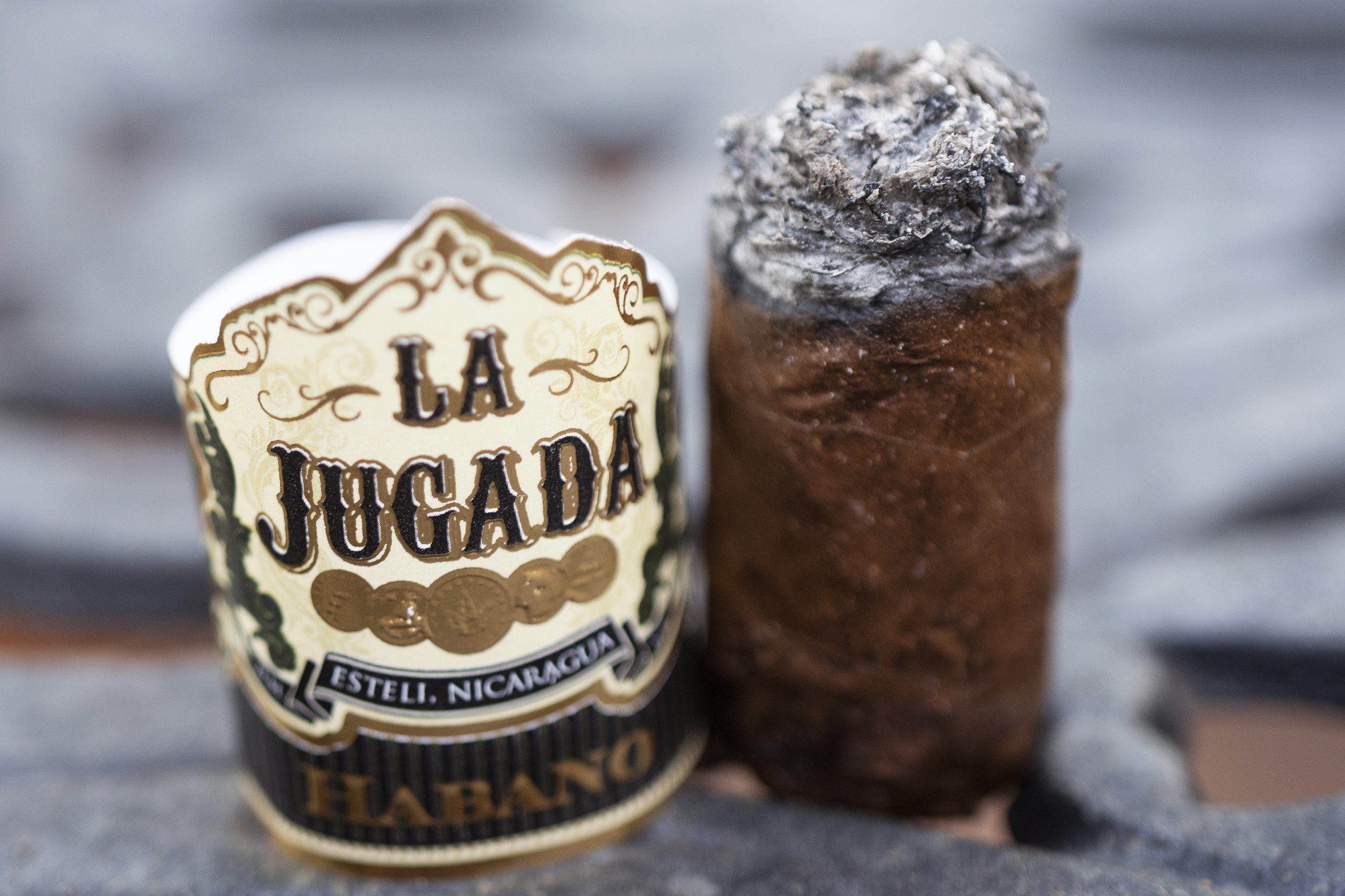 I knew the La Jugada Habano Semi-Pressed Toro blend was going to be a powerhouse after the first third and it did not disappoint in that regard. What I did not know was how much I would enjoy the combination of creamy profile, complex profile and distinct caramel sweetness, all of which were consistent on each of the three samples I smoked. Having said that, the combination of close to full strength and ever-present spice on the palate did give the overall balance issues at certain points, and the slightly loose draw was mildly annoying. In the end, I enjoyed the La Jugada Habano Semi-Pressed Toro quite a bit, but I am really looking forward to trying it again after it has some more age on it.