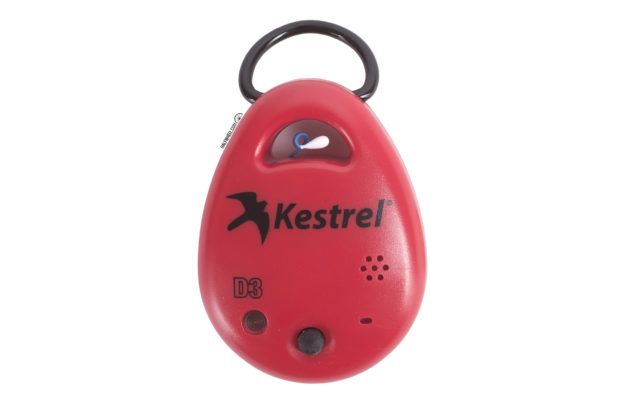 It’s time for yet another review of a complex humidification product.

The Kestrel DROP D3 ($129) is one of a growing number of devices that promises to make the activity of humidifying your cigars better, albeit, with a bit of complication. It’s technically billed as a “data logger,” but for cigar smokers, this will be better known as an advanced hygrometer. The Drop D3 measures and logs temperature and humidity, along with heat index, dew point temperature, density altitude and station pressure. It connects to an iOS or Android smartphone using a bluetooth connection and the free app shows live data as well as the historical data.

It’s got an egg shape, though it’s a bit a smaller than an actual egg at 2.38 inches in height, 1.8 inches in width and .94 inches at its thickest point. There’s a small non-removable d-ring that brings the height to 2.92 inches, though the d-ring can be moved to the side. Weight is a paltry 35 grams, about six quarters, and yet the Kestrel DROP D3 is the first humidification device I’ve seen with waterproof and drop standards advertised. Kestrel claims IP67 standard water protection, the same as the iPhone 7, which means it should work after being submerged in up to 1m of water for no more than 30 minutes. It also claims some sort of MIL-STD-810G specification, though it’s challenging to figure out exactly what that means.

The fact that Kestrel is advertising those two standards should give a pretty clear indication about the intended audience for the device, namely the company intends for it to be used in a bit more rugged environment than a Spanish cedar humidor. Much of the targeted implications seem to either be industrial or outdoors oriented. 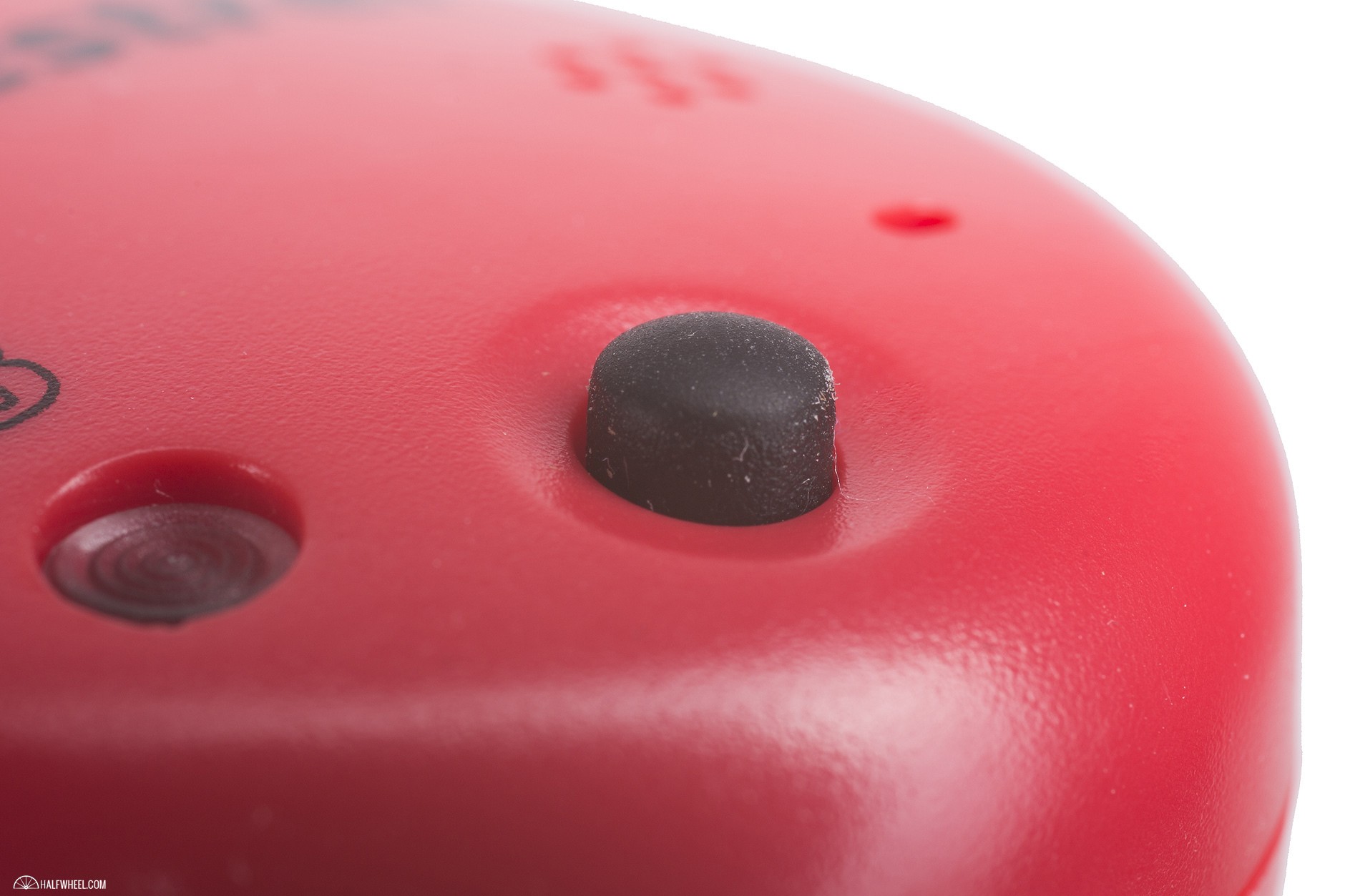 It comes in three colors—mustard, blue or red—and there’s not much on the device. A large logo runs across most of the top half of the device, a small light on the bottom left hand corner shows the device is still active and a black button serves a variety of functions, though it’s a single black button. 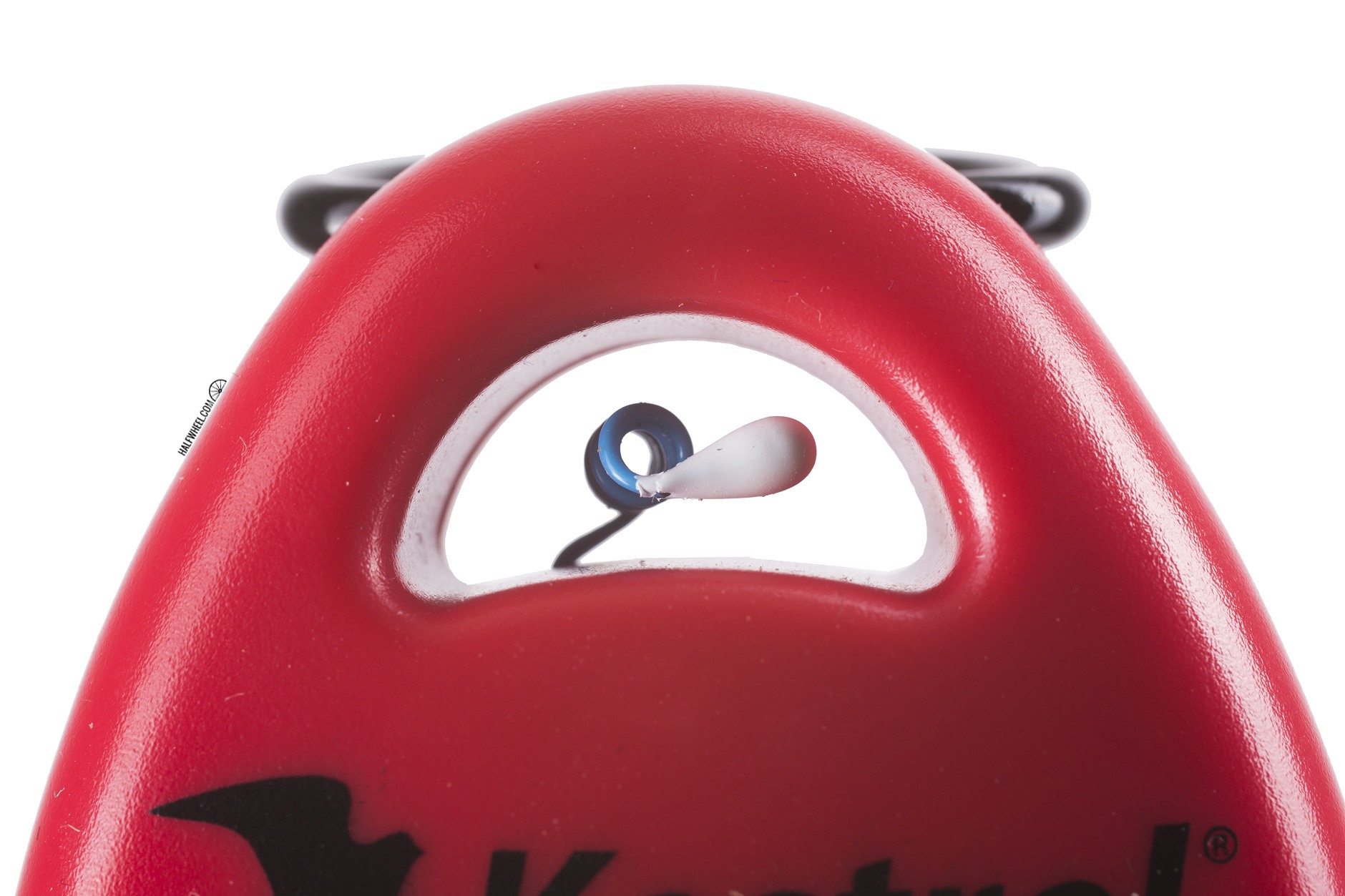 There are two intake holes on the right side of the device and that’s it, except for arguably the most interesting part of the device. At the top is a small seed-size probe attached with a blue coiled wire. It sits outside the device, giving both a more serious appearance, but also one that concerns me when it comes to testing the water protection Set up starts easy enough, I remove the battery cover, which can be accessed with a coin and pull the tab. 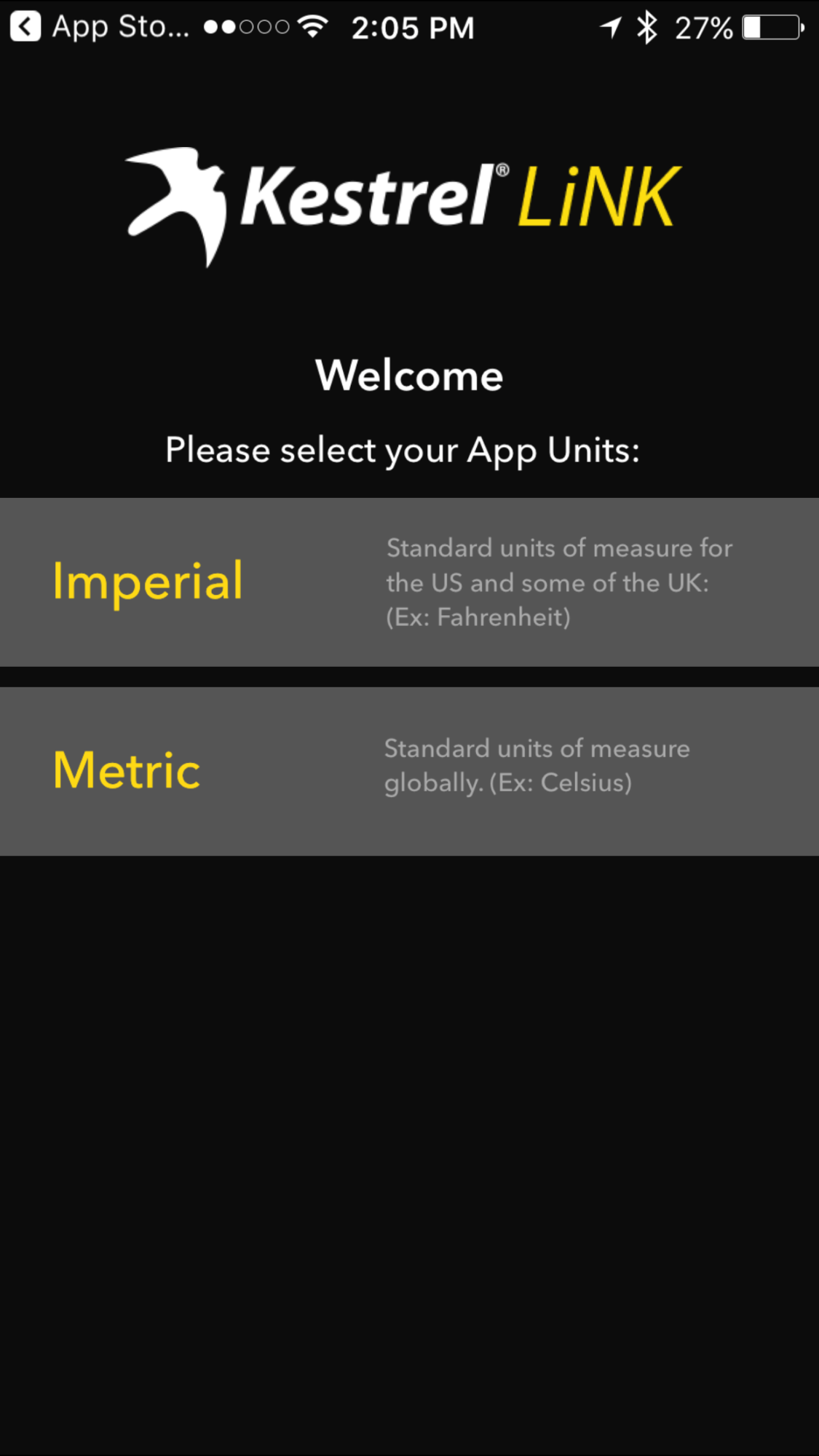 As soon as that happens a green light appears on the right side of the device. Next is a visit to the App Store to download the Kestrel LiNK app (free). The app requests to send notifications, which I allow, and then asks if I want to display results in imperial (standard) or metric numbers. 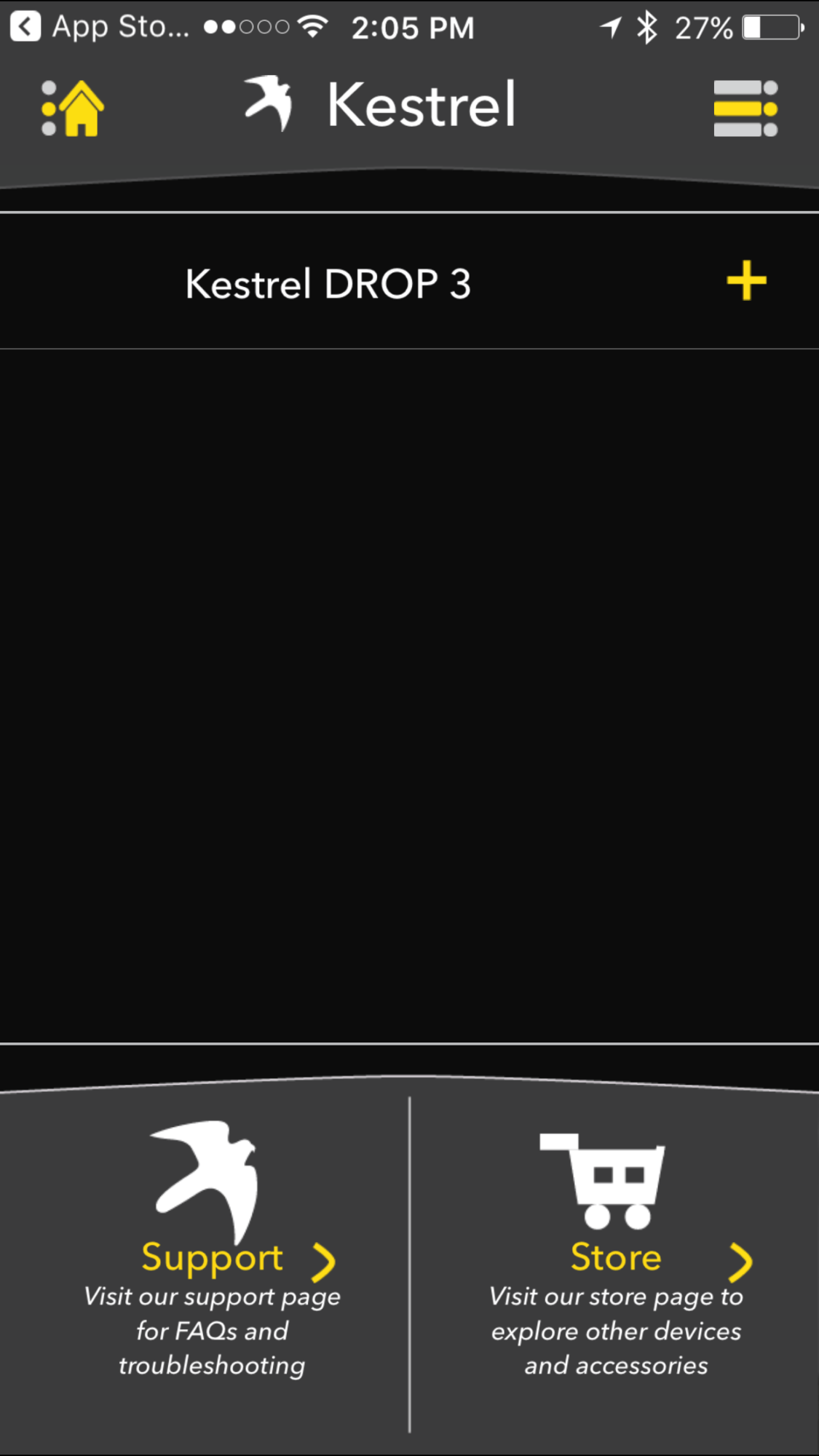 After that there’s not really any instruction, but I click the + sign next to the DROP 3 that appears pre-populated, give the device a name, skip registration and then I have a working DROP. 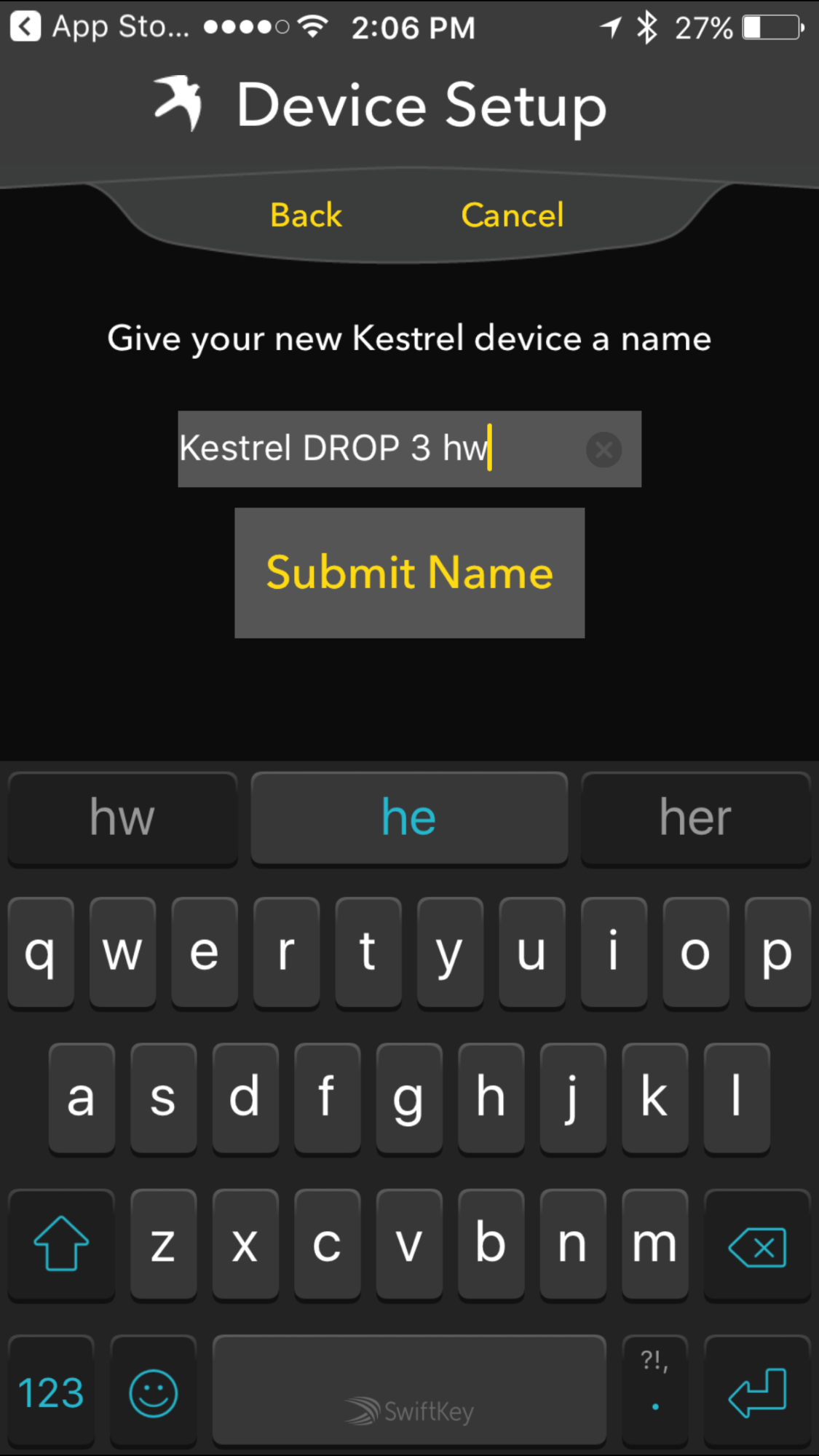 The main dashboard is able to show up to three basic measurements at once. I opt for relative humidity to be the main display item, taking up roughly half my screen, and then temperature and heat stress index below that. 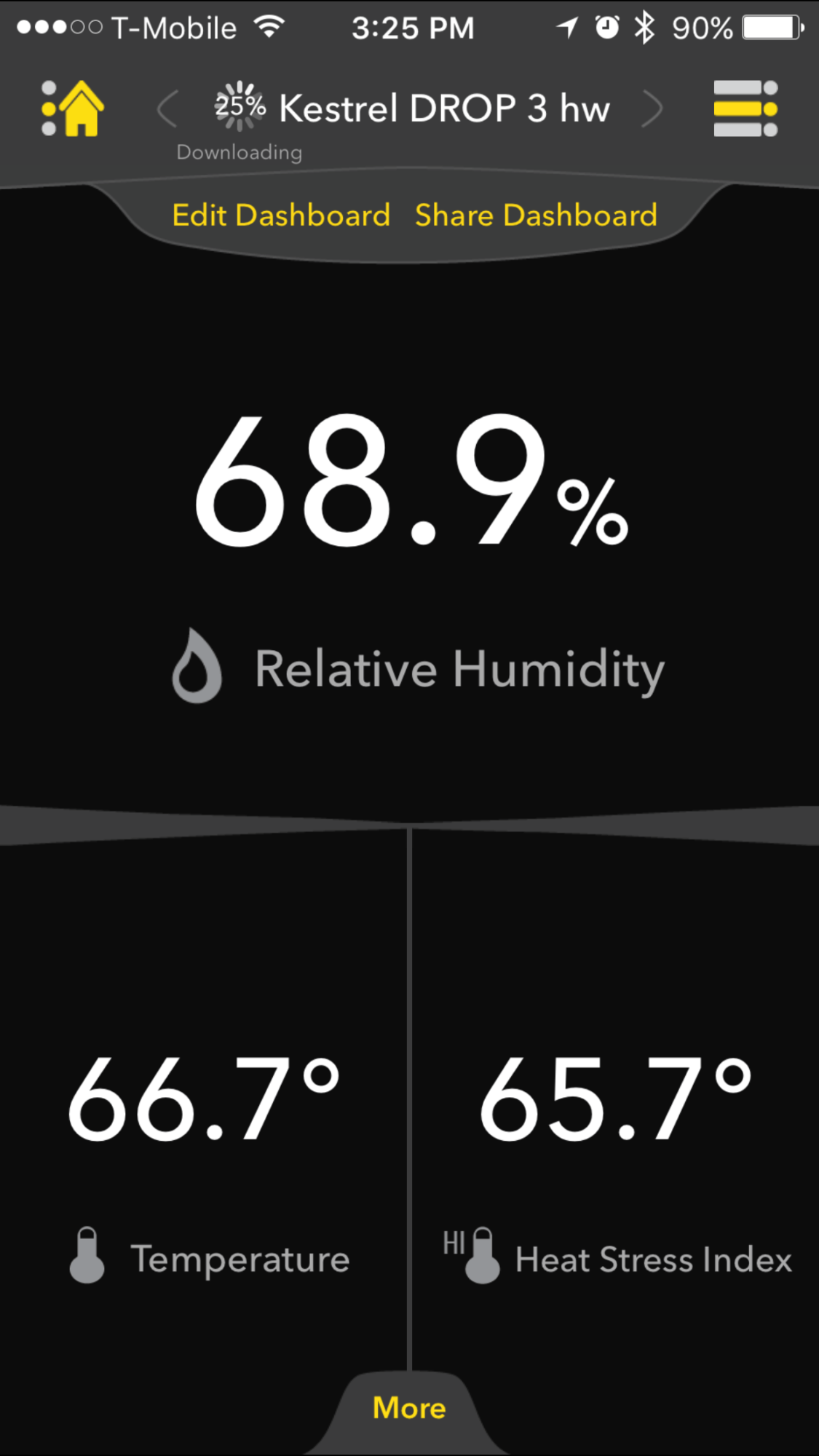 Once finished, there’s admittedly not to do once the device is set up. At the bottom of the screen I can rotate between five screens:

I make one more change to the settings, set up notifications to alert me if the temperature or relative humidity go outside a certain range. 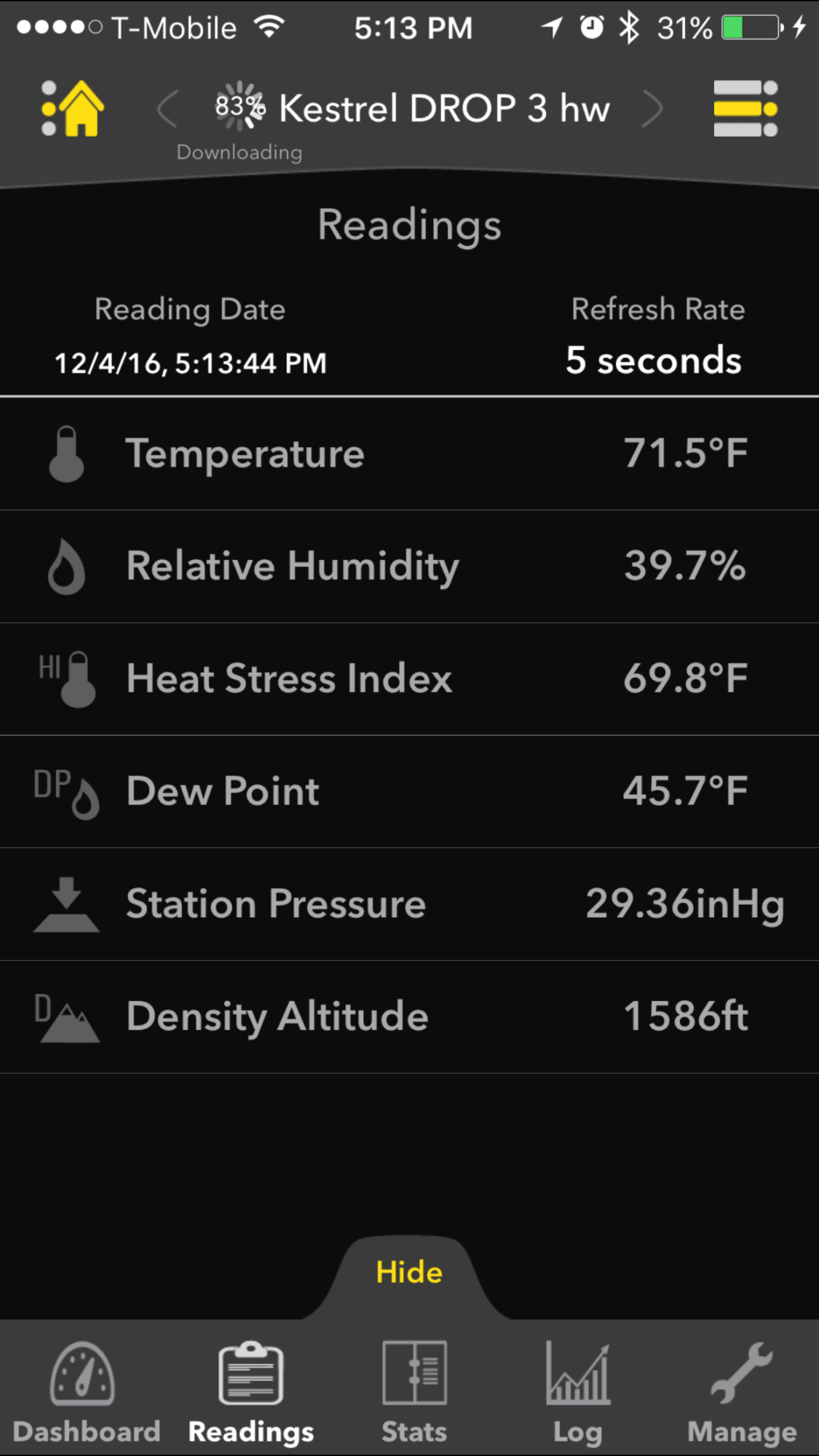 Once that’s done, I place the DROP D3 in a sealed container with some Bovedas and a calibrated hygrometer. The two devices managed to read within a half degree of relative humidity. My testing comparison comes to an end about two weeks later when the scientific hygrometer runs out of battery. Which leads to a seemingly appropriate time to talk about the battery life of the Kestrel. The company claims six months to a yea depending on settings, i.e. how frequently the device syncs, something I haven’t fully tested out, though the device is still working on the initial battery four months later.

Because Nielsen-Kellerman Co. advertises the water resistance of the product, I decided to put it to the test. I placed the Drop D3 in a carafe full of about a foot of water, not the full meter it claimed.[ref]One day we will have a pool at the office.[/ref] Interestingly, the DROP just floated on top, though I did submerge it a couple times fully. After 25 minutes, I took the device out, dried it, and returned to my iPhone to see if the device was still working. It was. I don’t know what value this could possibly have for a cigar-use,[ref]If your humidity floods for 30 minutes, your cigars will be ruined but your hygrometer will still work? Perhaps an insurance claim.[/ref] but I suppose the important part is that it does work. 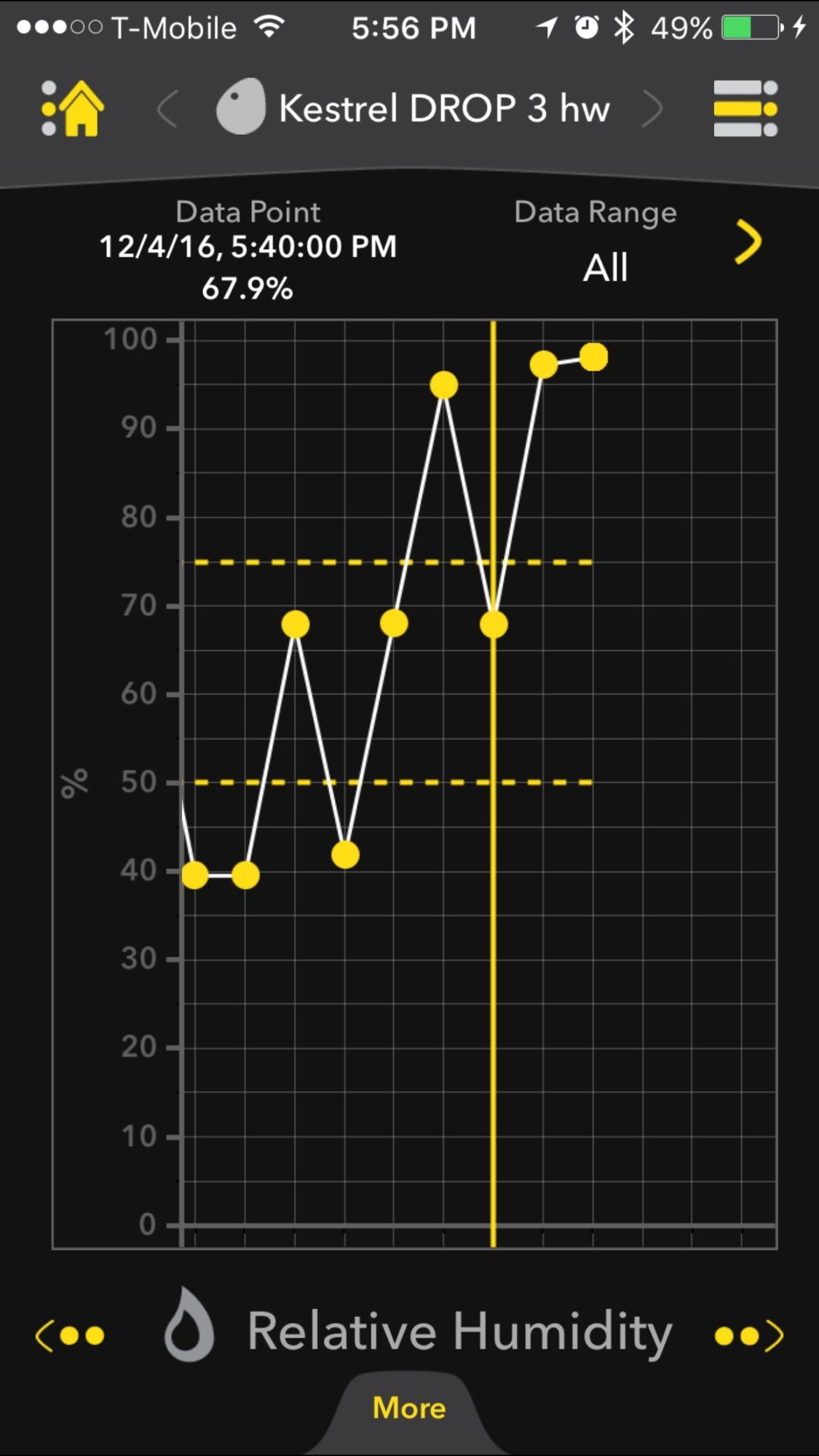 There are two areas where I could appreciate some improvement. The first is the $129 price. It works. But spending $129 a device that simply will let you know when things are going wrong seems a bit ridiculous. I certainly appreciate the argument that says $129 is a fraction of the value of the cigars of most of our readers, but it’s still a lot of money to spend on a hygrometer. Secondly, the device needs to be connected via bluetooth. This means you have to be near the device, as opposed to other data loggers which can be accessed remotely via the internet. 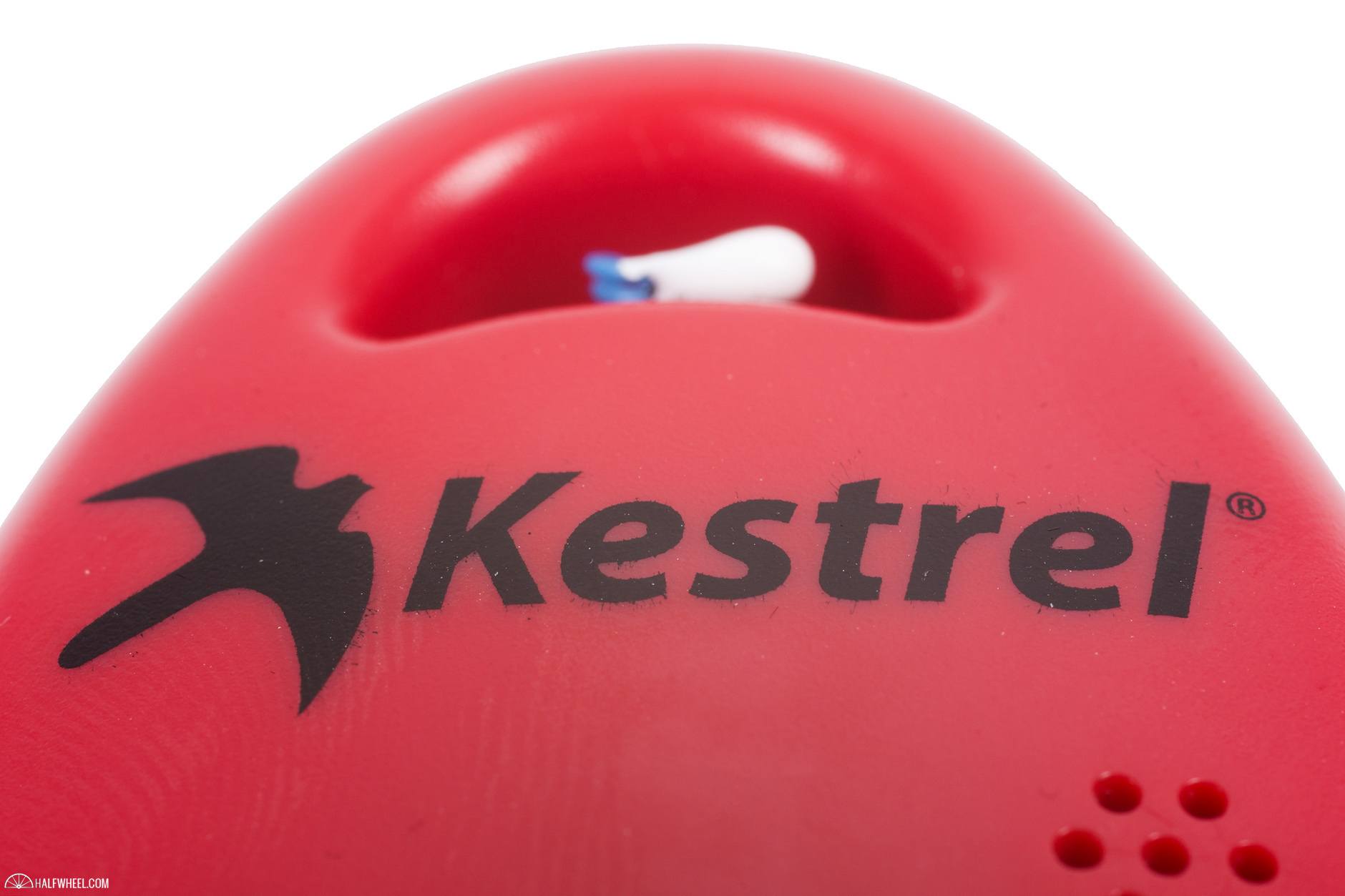 I am currently testing one of those devices, this unit from La Crosse. It’s not as elegant of a solution and it’s produced a handful of errors when it loses connection, but, I am able to access data when I spend a week away from the office on the other side of the world. It’s also one-third of the price and has a screen on the sensor itself. But it also is far more restricted in its update and logging capabilities with five minutes being the most frequent update setting. There’s also the Cigar Oasis WiFi, which not only allow the tracking of humidity, but the adjustment of humidity. It’s slightly cheaper at $120, but it forces you to use a Cigar Oasis humidifier.

At this point, I have a dozen humidors, another dozen travel cases and probably two dozen hygrometers. The most basic test for any of those products is whether to not I intend on using it after the review is finished. In the case of the Kestrel DROP D3, it’s already in the cabinet humidor that stores cigars for reviews. It’s neither perfect, nor cheap, but when it comes to the task of letting me know if our humidor is having issues or trying to determine whether there were issues, the DROP D3 is a pretty good solution.

You can purchase the Kestrel DROP D3 here.

The unit for this review was sent by Nielsen-Kellerman Co., makers of Kestrel.